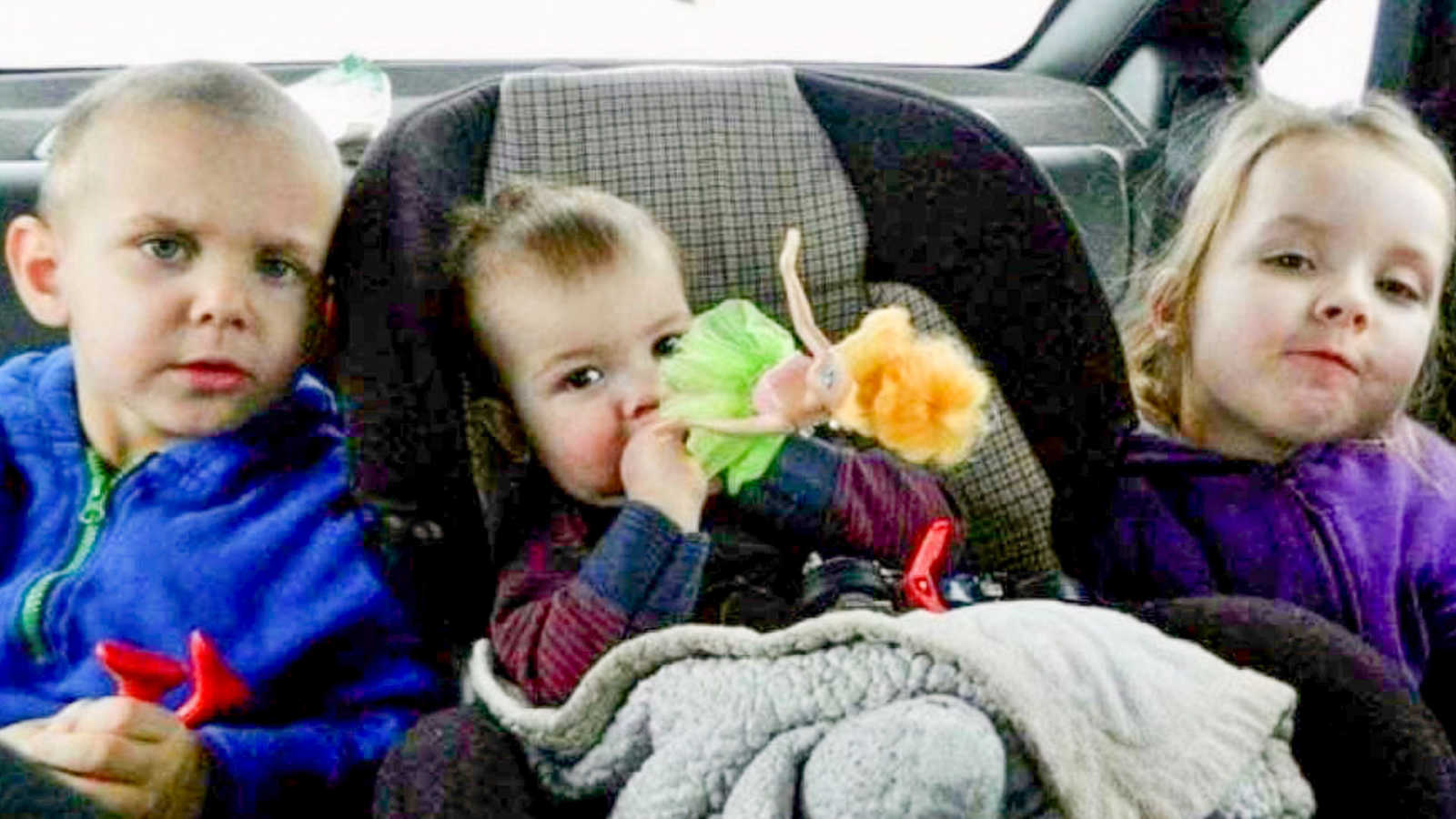 Disclaimer: This story depicts image of suicide, suicidal thoughts, rape, and self-harm that may be triggering to some.

“I’m from a small town in New Brunswick called Grand Falls, where everyone knows everyone and their business. Not many people venture out very far from our town, and when they do, most times they come back. I come from a family of 5, with a very huge family on both sides. We’re all very close. We get together every Christmas, even now as we’re all growing our own families. Sometimes this means being 80+ in a house so we can all be together for my grandmother, who’s the matriarch of the family on my dad’s side.

I had a rough school life and was extremely bullied. Most times I would be alone or try ‘too hard,’ as some would say, to fit in. I never really had friends. I had those who thought they needed to be my friends and those who were actually my bullies. I just never realized it until I was much older. I was a victim of rape at the age of 13. And I was victim shamed. Which led to me being bullied even more, being called every name in the book.

In 2003, I lost my best friend and protector. He was my cousin Luc. I lost him to suicide. His mental health had declined so much and it was such a taboo subject for guys to reach out for help. I blamed myself for years. He was like a brother to me and I was one of the last people he spoke to before he pulled the trigger. I was suicidal throughout my entire high school years, and actually self-harmed. No one knew. This is the first time most will actually be hearing about it. Even my family had no clue.

Growing up, I always knew I would be a mom. I loved children. I was known as the local babysitter; all the kids loved me. Initially, I wanted to be a social worker after I graduated. However, being depressed and lost in the world, I ended up being young and stupid.

I suffered multiple miscarriages before finding out I was pregnant with my first son. Me and his father went to the same high school and we reconnected after I moved back from a year stay in Halifax, Nova Scotia. Me and Jeff had a rocky start. It really wasn’t the best of relationships from day one. He brought me my two lovely stepchildren, Hailie and Owen. He had full custody of Owen and Hailie lived with her mom. I loved those children more than anything and grew an extreme bond with Owen.

We lived on social assistance, getting nowhere in life. So we did like 80% of New Brunswicker’s and set out for the better life out west. In November 2012, shortly after my first son turned one, we set off for a road trip across the country and ended up in Slave Lake, Alberta, where Jeff’s dad lives. Myself, Jeff, Owen and Trent loaded up our minivan and away we went. Hailie stayed with her mom in New Brunswick.

Things were going great. We moved into our rental home in January 2013 and I opened up my daycare. We made plans the whole month of February for Hailie to come up to us in Alberta. On March 12, 2013, Hailie came to be with us in Alberta. It was a wonderful time. Hailie and Owen are exactly one year and one day apart. So, we celebrated their birthdays the same weekend Hailie arrived since we were going to send Owen down to Grand Falls to be with his mother for a few months. For some reason, it’s as if the stars were in our favor, and we knew we needed to celebrate together.

We celebrated my birthday on March 20th with my sister-in-law and kids. Had a wonderful cake. We went to bed early, knowing we needed to be in the city for some appointments and to get my bank card fixed. It was a snowy day, however the highway wasn’t closed. So, we loaded up the kids into my sister-in-law’s blue Ford Focus. They were all in the appropriate legal seat. Owen and Hailie were both in a booster and Trent in a forward facing. I was following the law and doing what any mother does to keep their children safe.

We live in Canada and snow on the highway isn’t something we fear. We drive according to weather and we take it slow. About an hour and a half into our trip, we stopped so Christine could have a smoke break. We pulled into one of those truck areas. This is where I snapped the last living photo of my kids.

30 minutes after, we were hit head-on by an oncoming white Dodge Ram. My sister in-law, 4-year-old Hailie, and 17-month-old Trent passed away on scene. I knew Christine was gone due to how her hand placement was. I couldn’t see Hailie. I could hear the most gut-wrenching cry come from my son as he gasped for his last breath. And Owen was just screaming. Nonstop screaming.

Owen and I miraculously survived.  Myself with minor bruising and a few cuts. Owen had more severe injuries. He suffered a pretty severe concussion, broken arm, punctured spleen, and collapsed lungs. We had their services back in our hometown with our family. It was the most gut-wrenching thing I have ever had to go through. You know your kids are supposed to bury you. You’re not supposed to bury your children.

We then returned to Alberta. I continued my daycare for a short period of time. 8 months later, tragedy struck our family again and my other sister-in-law, Karelle, at the age of 17, passed away after a life-long battle with an auto-immune disease. This was when we decided to pack up and move back to our home town.

Unfortunately, our relationship dwindled down, and Jeff and I no longer had the love we used to. I then found out I was pregnant with Oliver. What a blessing this little boy was. Our rainbow after the storm. Me and Jeff remained separated. However, we do our best for our boys. I continue to raise Owen to this day. He is my best friend.

In 2017, I came across an article that caught my eye. It was about a car collision similar to mine where a little girl suffered internal spinal decapitation. The lightbulb went off and then I started searching. This injury is what my son Trent had suffered and what had ultimately killed him. The more digging I did, the more I came to see my children’s injuries could have been prevented.

I discovered an organization called the Child Passenger Safety Association of Canada. It taught me so much more about car seats and how many mistakes I had made in the past. I ended up pregnant with my daughter in late 2017 and had her May 2018 with my now-husband Nicholas. I signed up for the course and in November 2018, I officially became a Child Passenger Safety Technician.

In January 2019, I shared the photos of the accident for the first time. Media had never had access to these photos. I was releasing them on my own terms and my own time. I started making calls and emails to government officials and getting my cause and name out there. I worked so hard through depression and just many life downfalls. I came out to it with CPSAC member of the year 2019 and being recognized by Child Safety Link at the IWK. In March 2019, I released a post online and it went viral. This was the moment I knew my story had meaning. My story could save lives.

I started researching the minimum laws and when the last time they were updated. I started searching injuries occurred in a MVC. I became obsessed in my quest to help prevent the heartache I feel every day. What I discovered, is the laws in place are very outdated and are very minimal. I suffer from PTSD, anxiety, and depression. It makes things extremely difficult on a daily basis. I give over 80+ hours weekly devoted to making sure kids stay safe. It’s the only way I can remain out of the black hole of depression.

My only wish in life is for other parents to be spared the pain I go through everyday. The pain of knowing I will never hear my children Hailie and Trent, laugh, go to school, attend prom, or get married. I will never have any grandchildren by them. Their little voices are slowly leaving the memory core in my brain. All we have are videos and photos. I want my kids names to live on forever, saving lives.”

This story was submitted to Love What Matters by Eran Jalbert Jones of Fredericton, New Brunswick. You can follow her journey on Instagram, Facebook, and website. Submit your own story here and be sure to subscribe to our free email newsletter for our best stories, and YouTube for our best videos.

‘I was trapped inside as I was screaming ‘Get my babies!’ I was pulled out to hear ‘Is my mom dead?’ Mom URGES car seat safety