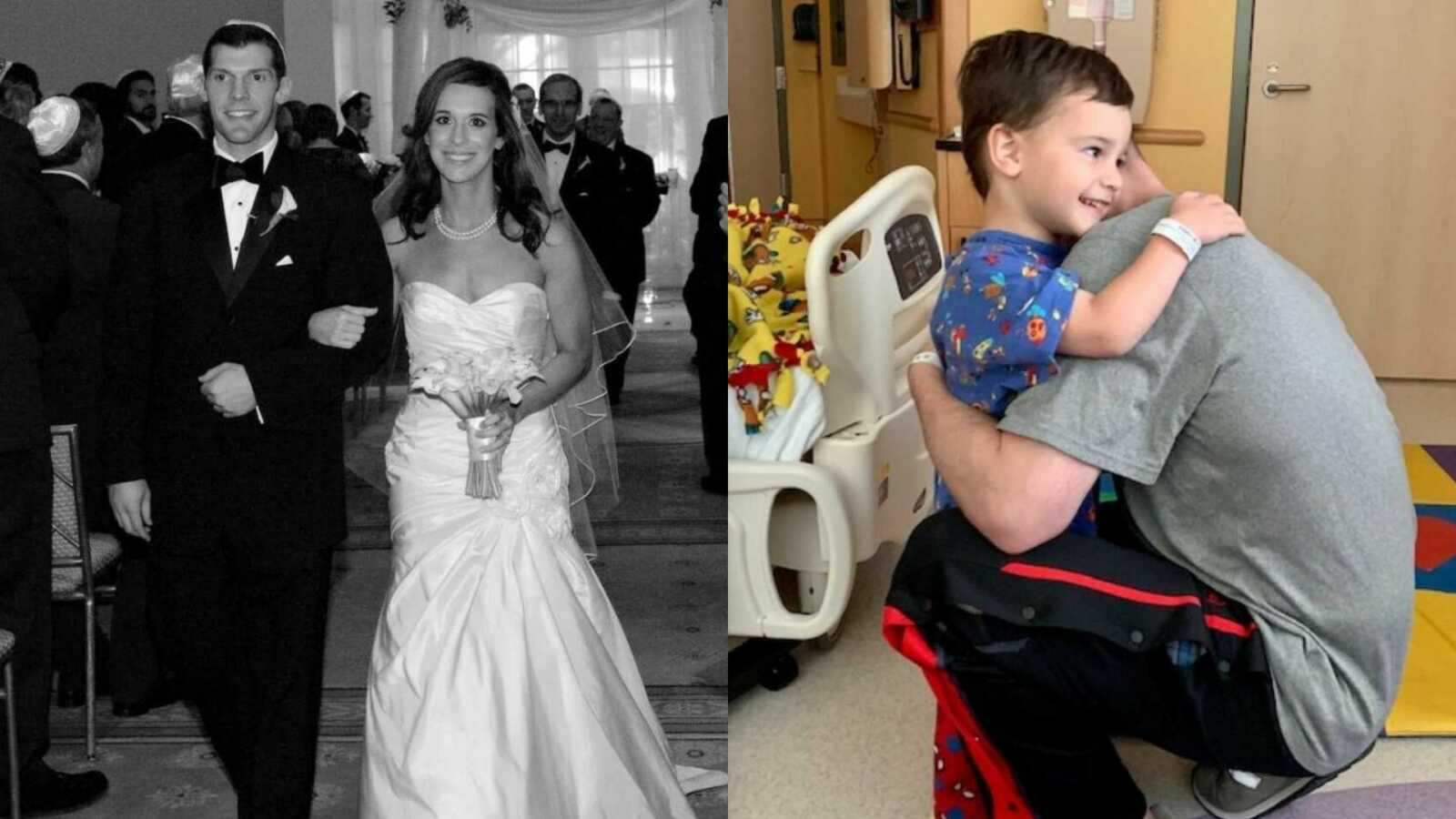 “Ten years! It is unfathomable how much has happened within this timeframe.  It seems like yesterday that my husband and I stood before our family and friends on our wedding day, young, eager, and without a care in the world.  I could never have predicted the hurdles we would face together.

Two and a half years of infertility.  Appointment after appointment, negative pregnancy test after pregnancy test of dreams shattered, frustration, and disappointment.  After my first doctor recommended moving forward with IVF, I felt in my heart that I needed to get a second opinion.  I will never forget my consultation with my fertility doctor.

He was larger than life, very optimistic, and gave me the hope that I so desperately needed.  ‘I don’t believe that you have PCS,’ he said.  ‘You don’t have any of the characteristics I typically associate with this syndrome.’  He told me that in his honest opinion, I needed to start with the least invasive, least expensive treatment.  He reiterated that he was speaking to me as if he was giving a recommendation to his sister or wife. After one of my upcoming appointments, I could hear him congratulating another couple on their pregnancy in the next room.

He came in and locked eyes with me.  ‘You’re next, Lindsay. I am going to help you get pregnant.’ After a failed cycle on a high dose of Clomid, he concluded that I needed more monitoring during my next attempt.  I went into his office every other day for 10 weeks so that he could check my progress.  My doctor met with me for every single appointment as his nurses stood off to the side. He said that he had never had a patient like me whose body was so delicate.

He wanted to proceed cautiously with my fertility medicine and shots as he knew that slightly tweaking my regiment could make my body go haywire. For about four weeks, nothing happened.  My body wasn’t responding.  Then, he very slowly increased the frequency of my shots, which my husband dutifully gave to me every other night.  At roughly six weeks, my husband I were both skeptical about my doctor’s non-standard practices.  As we walked our dog at night my husband turned to me and said, ‘There’s no way this is going to work, right?’  And then, it happened.

My body started to produce eggs. My doctor told me that the combination of medicine and shots was working. I took a pregnancy test on an early September morning and was elated when I saw two lines. ‘You’re going to be a very busy mom,’ my doctor exclaimed during an ultrasound to confirm my pregnancy.  I was finally pregnant, with twins.  After three months of bed rest and multiple appointments with a high-risk doctor, I was relieved to have our sweet boy and girl in our arms.

There were five days of shock mixed with fear and excitement when I found out I was pregnant with my third child. I was feeling nauseous and extremely hungry.  I also couldn’t stop sleeping. I jokingly said to my husband, ‘Maybe I’m pregnant!’ My husband’s face said it all as I snapped pictures of him with our newly turned one-year-old twins on the fourth of July.

He looked shell-shocked with a one-year-old baby in each arm. ‘How are we going to do this?’ my husband asked me. ‘We already have two babies.’ I asked my OBGYN on the phone if there was a possibility of me being pregnant with twins again.  She said that it wasn’t likely and my numbers didn’t indicate pregnancy with multiples. During my first ultrasound, my husband asked the technician to check three times that it was only one baby.  It was a fairly uneventful pregnancy and I knew our family was complete with the addition of our second daughter.  I was set to embark on our life as a family of five with three children under the age of two.

It was twenty-one months of panic and helplessness with a very sick child. At sixteen months of age, my son began to vomit.  It was endless and so crippling that we often didn’t leave the house. He couldn’t sleep and would either sleep sitting up in his crib or as I rocked him. He started to refuse to eat and was losing weight rapidly.  His pediatrician said that it was just reflux and put my son back on reflux medication.  My husband assured me he would grow out of it.

I stayed up at night trying to piece together what had happened to my little boy who was now a shell of the healthy, happy child he once was. My husband and I were at our breaking point. We were both exhausted, stressed out, and unable to have a conversation without arguing. He was adamant that my son was fine and I was overreacting. I took him from doctor to doctor with no answers.

At a little over three years of age, our son was diagnosed with a rare disease called Eosinophilic Esophagitis by his GI doctor. We proceeded to have to remove almost all food from our son’s diet. My husband and I locked eyes and began to cry when my son’s doctor gave us the news we had been waiting for.  My son’s disease was in remission. With the aid of feeding therapy, my son began to drink hypoallergenic formula and gain weight. We now have a six-and-a-half-year-old little boy, who is thriving despite multiple food, chemical, and environmental allergies and a very restricted diet.

Four years of unexplained symptoms, pain, and even more vomiting with my four-year-old and six-year-old daughters.  I have exhausted almost all avenues with visits to multiple allergists and specialists.  Several terms have been thrown out including Food Protein-induced Enterocolitis Syndrome (FPIES), food or environmental allergies that haven’t shown up on blood or skin testing, and Mast Cell Activation Syndrome (MCAS).

My six-year-old daughter has had multiple skin and blood allergy tests and two endoscopies to check for EoE throughout her short life.  One of the most frustrating aspects is that traditional allergy testing doesn’t accurately diagnose these rare diseases.  Doctors often have to rely on symptoms and children’s response to treatment in order to make a diagnosis. The last allergist that I took my six-year-old daughter to listened intently as I rattled off her symptoms and showed him pictures and videos.

Severe acid reflux, hives, leg pain, chest pain, extreme itching all over her body, insomnia, flu-like symptoms with lethargy after ingesting a food trigger. He responded, ‘I have had parents come in before who insist that their child is allergic to a certain food. I have seen some children who don’t receive positive blood or skin allergy test until they are seven or eight years old.’ He recommended that my daughter continue to avoid the foods that her body violently rejects.  She has yet to receive a diagnosis aside from reflux and food intolerances.

120 months. 3,652 days. 87,600 hours. Countless tears, never-ending stress, and heartache on our extraordinary journey. Yet, we have also experienced endless laughs, immeasurable joy, and unity as a couple.  Through it all, we have stuck together. I am grateful to have a husband who supports our family no matter what comes our way.”

This story was submitted to Love What Matters by Lindsay. Submit your own story here, and be sure to subscribe to our free email newsletter for our best stories, and YouTube for our best videos.

‘I heard an odd noise coming from my son. I looked over to see orange drool trickle from his mouth, his body rhythmically bouncing.’: Mom fights for answers to son’s undiagnosed seizures, ‘We will never stop trying’

‘Come feel this,’ the doctor said. I put my hand on her belly. My heart sank.’ Mom recalls daughter’s rare cancer diagnosis after thinking it was just an ‘umbilical cord hernia’ 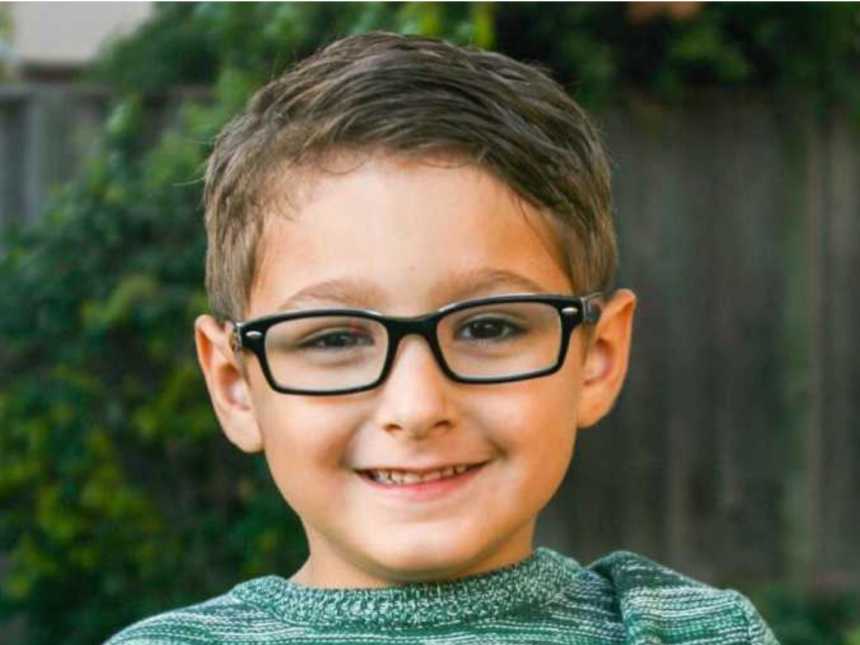 ‘I was never going to ask. I didn’t want to put that on you.’ Our guardian angels whispered loud enough to give us confidence.’: Mom of 4 under 3 adopts 2-year-old brother from dying father

“What would happen to Easton? Who would raise him? Where would he go? How do you figure this out in just a few days’ time? Something told me to step up. ‘You’re supposed to be his mom. Tell your dad. Tell him now.’ I tried for an entire day to quiet this voice, but it kept pushing. It felt like the most insane thing to tell my dying father.”