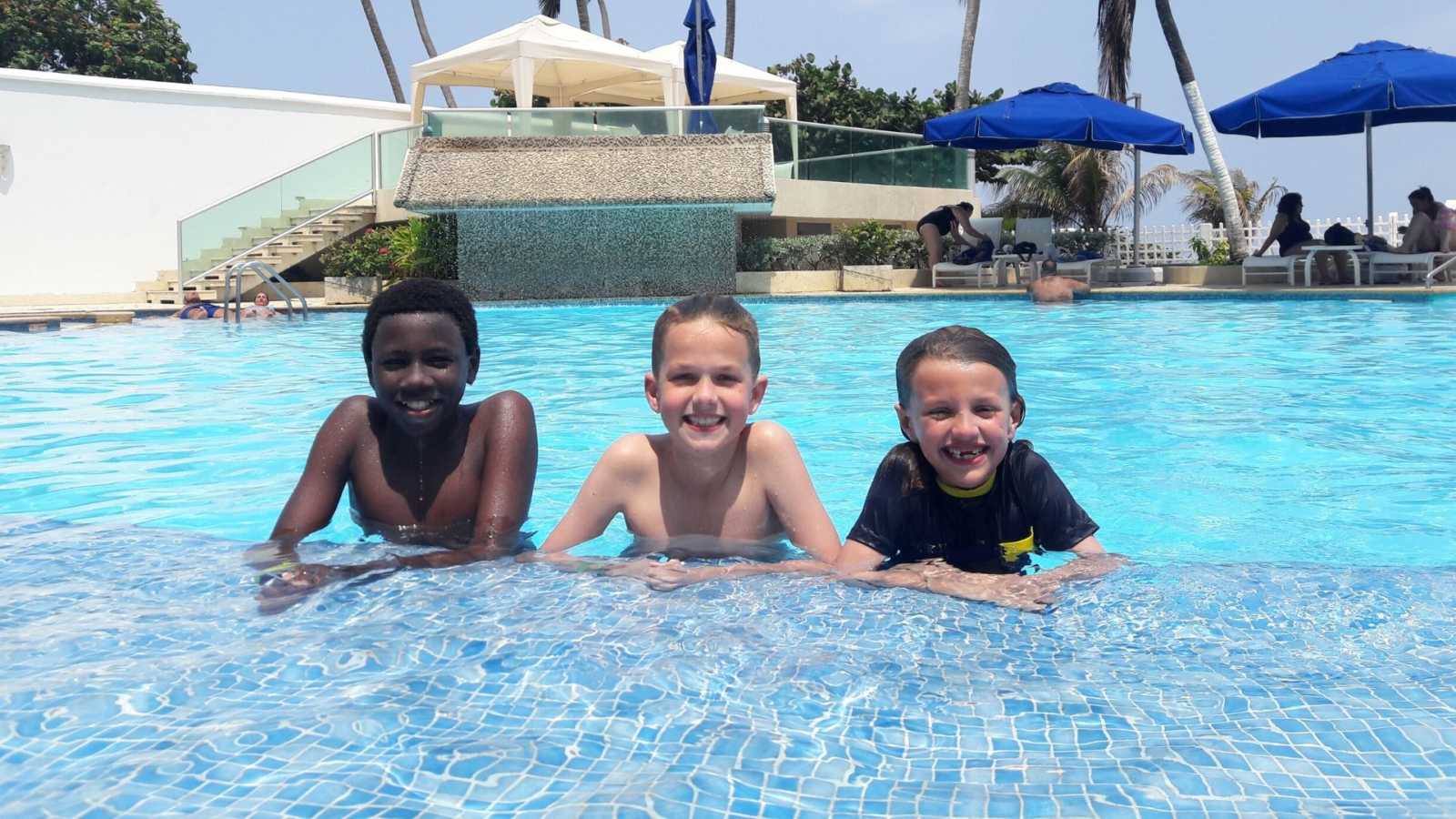 “Two kids… that was our plan even when we were dating in high school. Originally, we wanted a boy and a girl. But after Auden, I prayed for the second one to be a boy too. God saw fit to grant my wishes. However, I am reminded of a time I sat in Grandma Brownie’s kitchen and talked about the two kids I was going to have. She was quick to quote this verse:

I laughed it off and moved on, never to give it much thought until Adam and I found ourselves on this journey. Now we look back on that memory in awe.

We started this amazing journey with our boys’ school hosting ‘The Children’s World Choir.’ We were going to invite two of those boys into our home for the night. Auden and Asher were so excited! I was telling a close friend of mine about it over coffee one day. She told me if they thought that was cool, I should look into the summer hosting programs she had always wanted to do but never did. I was intrigued, so we got the computer out and began to search for the program. Eventually, we came to Kidsave. It was not the program she originally followed, but nonetheless, I was intrigued.

We looked through their website and Facebook page together, which is where I saw Juan’s picture, along with several other children who had been in the USA over Christmas. We looked through all of the children’s profiles together, and I left the coffee shop not being able to get Juan off my mind! I thought about him when I woke up and when I went to bed; I needed to know more! I kept praying the Lord would just clear my mind and make it go away, but it wouldn’t. So, I contacted the name listed under all the profiles.

It just so happened, not only did she work for the adoption agency, but she was also the family who had hosted Juan that Christmas! After emailing her, she called me to tell me all about Juan, which only made my heart want to explode… so LOTS more praying happened. I talked it over with my friend a LOT, and she finally convinced me to talk to Adam about it. I just knew he would shoot the idea down as soon as I mentioned it, so I prayed about it some more. Finally, I felt it was time to ask him about it all.

Once I told him I wanted to try to host Juan over the summer, I fully expected a ‘NO WAY!’ Well, I am here to tell you, when the Lord is in it, He will work it all out. Adam did not say, ‘No way,’ but rather, ‘Okay. Let’s look into it.’ I was shocked and couldn’t wait to tell my friend. We both agreed this was a certain sign this was all in the Lord’s will.

From there, things moved on, and we contacted Kidsave to see what we needed to do to host Juan. They informed us, since he had already been a part of the program once before, he wasn’t eligible. And even so, we were outside of their community and not eligible to host. Well, don’t try to stand in the way of God’s plan; it is bigger than any rule ever made! It wasn’t long before I was contacted and told if we were willing to complete a full home study, they would make an exception to host, pending the approval of Colombia. But, we would need to pick him up from and take him back to Washington, DC.

We agreed and started the procedure. We were approved and allowed to spend the most amazing five weeks with Juan over the summer!

We were all very excited and nervous when we arrived at the airport to pick him up. Imagine waiting anxiously to meet a child the Lord has laid on your heart, much like one He has placed in your womb. Only, this one can walk and talk, but not in the same language as you. The children finally made it through customs, after a long three hours, and we saw them coming through the airport. There was so much excitement, but it quickly turned to awkwardness after about five minutes. We finally were allowed to leave, and we headed to the car. My kids have never ridden in such silence! I quickly wondered what exactly I had done.

We rode in silence for about 20 minutes, to find a phone store for the chaperone who would be accompanying Juan for the first week. I waited outside with the boys, and that was all it took to ease the tension. They got out the soccer ball, and that was it. The universal language of soccer began, and the rest of the summer was history! From that point on, you would have thought the three of them had been brothers since birth. We had the best summer, filled with adventures, fun, learning, and lots of laughter! (You can see all the photos on Facebook with #FunSummerWithJuan).

It was the fastest five weeks ever! When the time came to take Juan back to the airport, we all knew it was going to be a sad day. But, nothing can prepare you for the feeling of watching the child you know the Lord had sent to be yours, walk away crying to get on a plane to another country, not knowing when or if you will be allowed to talk to him again. To add to the sadness, it was very hard to watch our 10 year-old and 7 year-old try to fight back the tears, only to give in and ask when or if they will see Juan again.

We prayed about the decision to adopt a lot, but ultimately it was left to Adam. Much to my surprise, he started talking about adoption before I did. See, the Lord works everything out when you seek Him to direct your paths. Our adoption journey was 100% God lead. He made the way possible and opened doors every time we thought one was closing.

We spent an amazing 18 days in Colombia and loved every minute of it! The adoption process was finalized in Colombia, including Juan’s request to change his name to be an ‘A’ name like the rest of us. He chose his new name and wrote a letter to the judge about why he wanted to change it. He chose the name Arkyn, which means Eternal King’s son. (Very appropriate!)

We have now been home 8 months, and Arkyn has settled in quite nicely. We say it was as if he was always meant to be here in our family, and the Lord knew just that! So, listen to Him and follow His calling; you will never regret it!”

This story was submitted to Love What Matters by Ashley Pethel. Do you have a similar experience? We’d like to hear your important journey. Submit your own story here. Be sure to subscribe to our free email newsletter for our best stories, and YouTube for our best videos.

Do you know someone who could benefit from reading this story? SHARE on Facebook with family and friends.