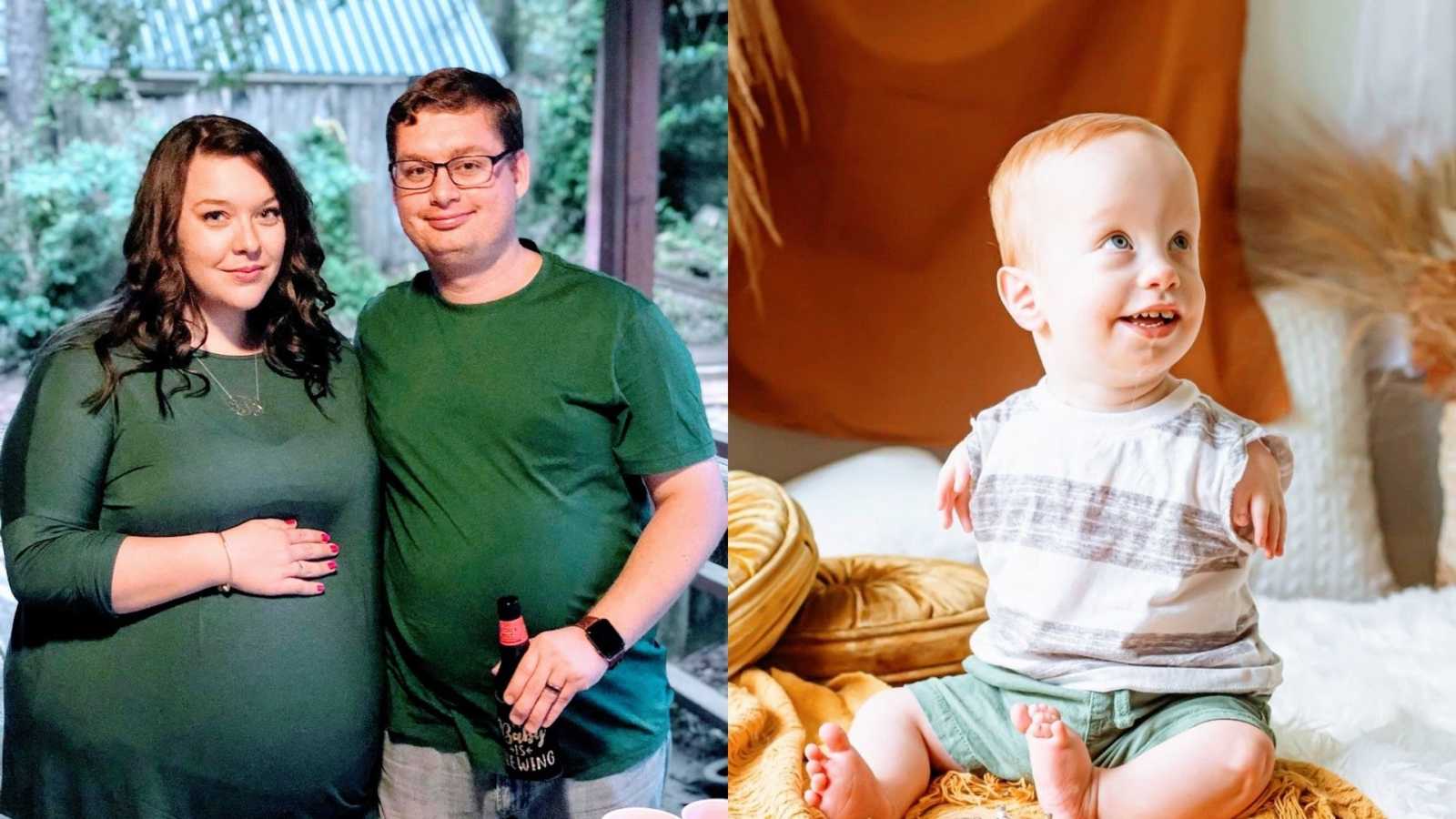 “On August 26, 2019, my world stopped. I was 24 weeks pregnant, and I was tired. My OBGYN appointments were starting to become annoying. This was the third week in a row we had to come back for another ultrasound. I was excited to see our little Henry Wyatt again, but I had the worst feeling something was wrong. This was our first child, and he was completely unplanned.

We were set in the exam room, and it felt like an eternity before my doctor came in. I’ve never seen his face appear in such sadness. He is a very straight-to-the-point man, thankfully. He told us, ‘We can’t see any arms.’ I stared at him like he had just spontaneously spoken another language. ‘What do you mean?’ I asked over and over. He said he couldn’t confirm it yet, but he believed our child would be born without his upper extremities. I don’t remember a lot about going home. I vaguely recall my husband and me sitting up for most of the night, not really talking. We just held each other.

The very next day, we were sent to the high-risk doctor at the best children’s hospital in our area. I personally brought every single ultrasound from my entire pregnancy and made the doctor point out what I thought were arms. I was chasing shadows and clinging to hope there was a mistake. I kept having to get up from the ultrasound because I couldn’t handle the information we were seeing. I kept looking at my husband for answers, and he was just a lost as I was.

I distinctly remember sitting there in the doctor’s office trying to hold my breath, thinking it would give them a clearer picture on the high-resolution ultrasound. Every picture confirmed it: Henry would not have arms. Just hands directly off his shoulders. I remember walking to the truck out of the high-risk doctor’s office feeling more numb than I have in my whole life. I couldn’t breathe. I could barely walk without grasping my husband’s arm. I threw up in the parking lot, not from nausea but from panic.

My husband and I both cried our eyes out as we drove around to clear our heads. We drove down to the local beach and sat in the vehicle by the water. I distinctly remember obsessively Googling, ‘What causes no arms?’ then finding nothing that fit. It was so infuriating because I needed to know more.

The doctors couldn’t confirm it yet without the results from our amniocentesis, but they believed Henry had a rare genetic disorder called Thrombocytopenia Absent Radius Syndrome, or TAR for short. It causes low blood platelets, missing arm bones, other limb deformities, lowered immune system, and, more times than not, a milk protein allergy. There are two types of TAR syndromes, ‘long arm’ and ‘short arm.’ Long arm TAR patients are missing just the radial bone in the arm. While short arm TAR patients are missing all three arm bones. Henry was the lucky 1 in 200,000 to have short arm TAR.

We called our close family members and explained what little we knew at the time. They had so many questions, and I was fresh out of answers. The one question I kept asking myself was ‘how in the world are we supposed to raise a child with no arms?’ At first, when I looked back on those few days after we received his diagnosis, I felt so guilty for feeling like I did. I repeated over and over, ‘How am I going to be a mom to a little boy who needs more than I can give him?’ Now, I realize I wasn’t worried about his arms, or lack thereof, at all. I was worried about our ability to care for this amazing child because I felt inadequate.

Our next step was learning to adapt. One of my biggest things, when we found out about Henry’s arms, was his clothes. Why does EVERYTHING have sleeves? All of the sleeveless items were summer clothes, and Henry was due in December. The feeling of being inadequate hit me like a freight train. I didn’t sleep. I didn’t eat. I screamed and cried and acted like a crazy person. I felt my soul break in half. My fellow special needs parents will know what it feels like. It’s gut-wrenching. I then realized I couldn’t stay in that dark place. I had to fight. I had to figure out how to do the best for this little boy with lucky fins.

Upon my hours and hours of research into our new future, I found our amazing support system in a TARS Facebook page. These people gave us hope. They gave me a life raft to hold onto when the waves kept pulling me so far under that it felt like it was almost easier to let go. Since Henry was born, I have clung to these friendships. One mama, in particular, has carried me through many storms. Christina has taught me how to find strength in my toes and pull it up to my heart. She has taught me to be an advocate for this firecracker of a boy.

When that cold day in December finally arrived, I felt ready. I was incredibly nervous, excited, and scared; but I was ready to meet this tiny human who had rocked my world. Henry Wyatt was born at 12:54 p.m. by c-section. He weighed 6.2 pounds. I did not want a c-section at all. The doctors said we had no idea what his platelets would look like so it was unwise to try a vaginal birth. I felt like another choice had been ripped from my fingers, but I reluctantly agreed.

To this day I’m so very thankful I did. Henry’s platelets we’re hovering around 13,000. To put this in perspective, a healthy baby normally has between 150,000 to 450,000 platelets. When the numbers reach 10,000 is when the brain bleeds start to happen. Henry spent the first month of his life in the NICU. We got released on Christmas Day!

Unfortunately, we were sent right back two days later for a heightened white blood cell count and had another week-long stay. We had a lot of transfusions, a lot of IVs, a lot of tests, exams, and x-rays. We also had a lot of support, love, and newfound friendships. Those phenomenal NICU nurses became my lifeline. I was determined to breastfeed despite Henry’s severe lip and tongue tie. One nurse, in particular, Rachel, helped me every single day until we got it down. I will never forget her kindness. Unfortunately, a few months later he would refuse to latch, and I had to switch to exclusively pumping which I proudly did for a year!

For some crazy reason, we were chosen for this. It might not ever make sense to us, but it’s our reality. We had no choice to embrace it! Henry is now 18 months old and the most perfect boy in the world to us. The first time I got to see him with my very own eyes, I was in awe. We created that! He was ours forever.

These days I find myself staring at him when he sleeps. I cannot wait to see the person he grows into. He is so full of personality and light. He loves to scoot, bounce, and roll all across the house. His favorite toys are his trucks. He will take them and push them with his feet over the entire floor. He feeds himself. He holds his sippy cup. He has had 5 surgeries, countless doctor’s appointments, and too many hospital stays to count. Yeah, there will be really hard days, but there will be really amazing ones too. The mantra we always use is, ‘No arms? No problem!'”

This story was submitted to Love What Matters by Jessika Turner of Mobile, Alabama. You can follow their journey on Tiktok and Instagram. Find more information about TARS and limb differences here. Submit your own story here, and be sure to subscribe to our free email newsletter for our best stories, and YouTube for our best videos.

‘His arms and legs, are they there?’ I couldn’t look at his picture.’: Mom says son with limb differences is ‘exactly who he is supposed to be’

‘There’s an issue with her hand.’ I was scared. It was inverted backwards, and she only had 3 fingers.’: Mom ‘shocked’ after daughter born with limb difference, ‘I was determined to protect her every way I could’

‘I’m under the impression you already know your baby is missing its left hand.’ The doctor looked mortified.’: Couple learns of daughter’s limb difference, ‘angry’ after doctor suggests termination