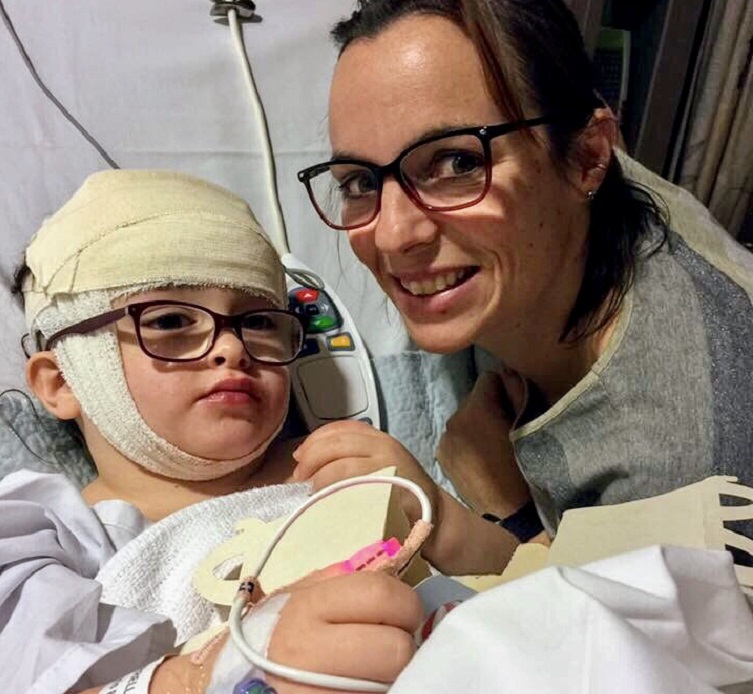 “January 2017 I took my then 6-year-old daughter for a routine eye test, along with our other two girls. I wasn’t going to take them — I thought they were all doing well and as a mom I would know if something was wrong. None of our three girls ever complained about their eyes.

While doing the eye test, the ophthalmologist did a routine pressure test that they do on everyone. Alexis’ pressure test detected high pressure behind her eyes. The ophthalmologist wanted the test redone. He said, ‘Wow, that’s so high it must be wrong.’ But the pressures behind the eyes were not wrong. They also did routine photos of behind the eyes, which detected swelling on the optic nerve that he felt needed to be investigated.

We were sent to a few eye specialists.

On July 4, 2017, at 7 years old, Alexis had an MRI under a general practitioner. After that MRI, she was sent to The Royal Children’s Hospital here in Melbourne from the Geelong Hospital straight away.

The next day, she had a full day of tests.

On Friday, July 7, 2017, the most amazing specialists sat us down and explained all the issues. They said Alexis is very complex, and they were amazed she had no pain or symptoms. They told us they were preparing emergency brain surgery, and she would be going into surgery in a few hours once they got the team in place.

When they first kept sending us to different specialists, I wasn’t concerned. I thought everything was fine and we had nothing to be concerned about. But when they said the words, ‘getting surgery prepared,’ we had no time to think. I just cried and cried and cried. Alexis is a healthy child.

We took Alexis down for the first surgery, and she asked what was going on. I said, ‘They are going to do an operation on your head.’ She ran away and we had to catch her. She was screaming and screaming. We cried and told her we would have the surgery for her if we could. The nurses had to close off the curtains to give us a little privacy.

After the first surgery, her dad touched her hand and she pushed him away. He was devastated and cried (he never cries).

She couldn’t see properly from the surgery and she felt for me and grabbed my head and just held me tight.

Three days later, she had another emergency brain surgery.

Alexis is now 8 years old and we are waiting to see if she requires more brain surgery. At the moment, she is back at school in second grade.

All of this happened during the July school holidays, but when Alexis’ school found out, her principal contacted me through Facebook and asked what they could do to help. They organized an action plan to help ease her way back into school.

I cried and cried on Alexis’ first day of school.

It turns out the eyes are a window to the brain, and that pressure behind her eyes was in fact intracranial pressure on the brain caused by a condition called chiari malformation we had no idea she had.

This story was submitted to Love What Matters by Lauren Tyrrell of Melbourne, Australia. Submit your story here, and be sure to subscribe to our best love stories here.

SHARE this story on Facebook to encourage other families to keep up with their routine eye exams.