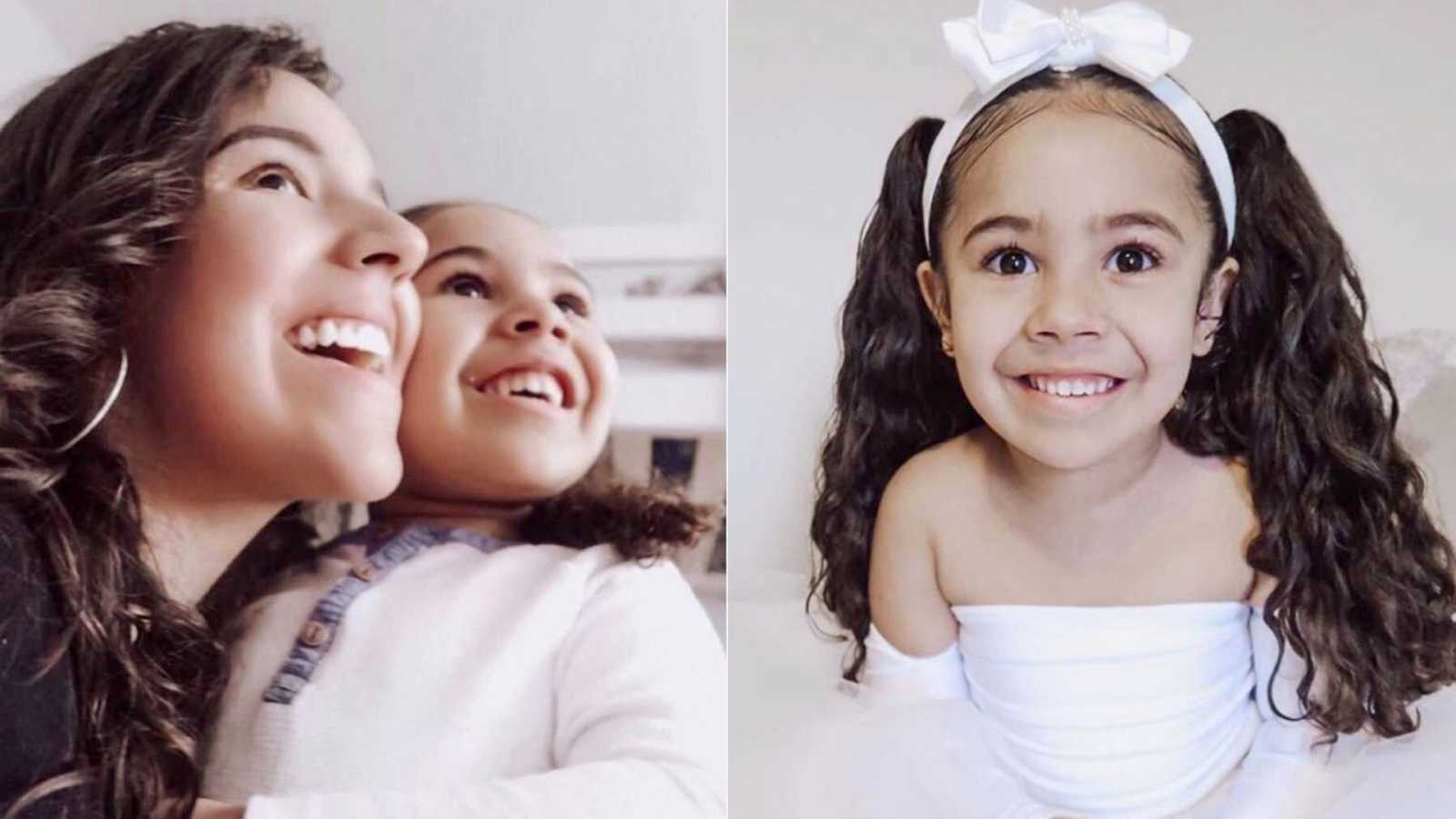 “Motherhood, the most wonderful yet toughest ‘hood’ a woman can enter. People tend to always mention the fantastic things about being a mother, but I think we can all safely say the good often comes with its challenges. No one ever tells you your child may possibly be ‘different.’ You may know there are children with disabilities, but you never imagine it to happen to your little one.

At the age of three, my daughter, Nevaeh, was diagnosed with Autism. It all started when, by the age of two, I had noticed a huge setback with her. It had my mind twisted in a knot. I would often compare her development with that of my son’s – Julian. He developed much faster than she did. But comparing Nevaeh to Julian made me feel like a terrible mother. Instead of thinking, ‘They’re not the same person, relax,’ I was thinking, ‘My son was doing all this by her age, why isn’t she?’

Her father continued to tell me, ‘Babe, there’s something not right with Nevaeh,’ but I always responded with, ‘She’s fine, she will pick up in no time.’ Did I truly believe my words? Well… no, but I wanted to.

Picturing something wrong with my child was not the image I wanted and as a result, I kept pushing it away in hopes she’d blossom. She began to attend a school I assumed would help steer her into developing more social and verbal skills. Nevaeh made some progress in certain areas, but there was still a lot which didn’t sit well with me. Her teacher reached out with some concerns. She said Nevaeh had, in fact, picked up on a few things, but she isolated herself quite often. Instead of interacting with the other children or playing with toys, she would sit in the corner next to the bookshelf, pretending to read. I knew my daughter had a passion for books but this didn’t seem like something a ‘typical’ two-year-old would do all day long.

Her father and I decided to have a conversation with her pediatrician. She shared her concerns. Then I heard a word which dropped like a bomb: AUTISM. Her pediatrician was not able to diagnose her but she expressed how Nevaeh showed multiple signs and it was possible she may be on the spectrum. Autism was not something I was familiar with. Instantly, I thought, ‘What in the world does that mean?’ At that moment, I wanted the doctor to be wrong, and so, I told myself consistently, ‘It’s only a speech delay.’

We then received a referral to a neurodevelopmental pediatric specialist. I called right away to ensure I could receive answers as soon as possible. One of the worst feelings is watching your child struggle and not be able to express themselves in order to get you to help them. The next available appointment was in seven months and I went into a complete breakdown. Seven months? Are you kidding me? There are children who are in need and we have to wait months to begin the process of gaining that help? Ridiculous!

In the meantime, instead of sitting around twiddling my thumbs, I took action into finding available services for her. Luckily, she was approved for speech therapy at our local hospital. The speech pathologist blew me away with how fantastic she was. She provided me with tons of advice and tips/tricks to incorporate at home. Nevaeh, on the other hand, was extremely uninterested in interacting with her. She had meltdown after meltdown each time she attended. Every inch of me felt defeated by a possible diagnosis.

I hardly spoke to my friends and family, barely ate, and cried myself to sleep every night. I dreaded the possibility of Nevaeh being diagnosed with Autism and held onto the hope of some other diagnosis instead. I felt like I was losing my mind. My prayers eventually became a list of questions to God.

Why isn’t my daughter speaking enough?

Why isn’t she sleeping?

Why doesn’t she like certain foods and will allow herself to starve before eating?

Why does she isolate herself?

Why is her voice so high pitched when she’s upset?

Why is she sensitive to sound?

Why does she have horrible anxiety?

But most of all… why my daughter?

I did not want this life. It felt unbearable. The love I have for my children goes beyond words. I could not stand witnessing my child struggle day after day.

Finally, after Nevaeh progressed a little and the entire list of questions was answered by myself, Nevaeh was diagnosed with Autism. I knew it was inevitable, but for some reason beyond my comprehension, I just did not expect to hear it. Hearing the words, ‘Your daughter has Autism,’ made it feel like my heart fell out of my behind.

No parent can mentally prepare themselves for a diagnosis. No parent wants to prepare themselves for a diagnosis because they don’t want one in the first place. At first, that was the mentality I was adopting; turning the other way and denying there was something wrong. I did not want to mentally prepare myself because I couldn’t mentally prepare myself for something I didn’t want. I spent a lot of time grieving but eventually, I also spent a lot of time educating myself. That’s when the script flipped. I researched all the pros and cons of Autism and realized children with Autism are different, but they’re not of any less value than any other child.

Every person who discussed Autism with me discussed it in a negative way. Everyone was telling me it is one of the most terrible things a child could be diagnosed with. No cure, no words, no hope. They gave me no compassion, but what they did give me were statements which were untrue.

There is no denying children with Autism have it tough and the family deals as well. When a child is diagnosed, the family is diagnosed, too. However, after every storm, there’s always sunshine, and with proper guidance, you can ease your child’s difficulties. What a relief it must be to hear, right?

After spending months flooded by the bad, it was hard to see anything good with Autism. I remember in high school, I would see students come out of their special education classroom and I wouldn’t know how to act towards them. Many of my fellow classmates would laugh and tease them and belittled anyone with a disability. This always built up anger inside of me. Each time I saw an act of bullying take place, it would personally hurt me, even though I was not on the receiving end. I even cried sometimes, as though it was me who had been attacked. I stood up for a girl one day and it was the best feeling, knowing I stopped something so cruel. I can see now, it was God preparing me for what was to come. God put me in the same position again to now defend my daughter and be her voice, her strength, and to be her mother.

Autism changed my life and I am so glad it did. It has shaped me to become more loving, more understanding, and gave me a purpose. This journey pushed me to become a children’s author of a book called The Ausome Kids. It shares different signs of Autism and teaches children to be inclusive while embracing neurodiversity.

Autism is just a brain with a different operating system, that’s all. No one wants their child to be different, it’s understandable. Maybe it’s just based on our ignorance or our own fear. But being different is beautiful and inspiring. Nevaeh is funny, kind, energetic, loving, beautiful, and oh so smart with a thirst for knowledge which brings me peace of mind that everything is going to be okay.

If you are a parent of a child with Autism, I know how you feel. Finding the right resources and trusting others is only a couple of the hardest parts of this journey. But once you put yourself on that path, everything begins to unfold freely and fall into place. In the meantime, hold your child’s hand and allow them to be your tour guide into their view of the world.”

This story was submitted to Love What Matters by Esmeralda Vega from Sussex, New Jersey. You can follow their journey on Instagram. Do you have a similar experience? We’d like to hear your important journey. Submit your own story here. Be sure to subscribe to our free email newsletter for our best stories, and YouTube for our best videos.

‘No shoes, I ran through the security gate, tripping as I searched for the family. ‘You did an amazing job, dude.’ It was like we’d known each other for years.’: Mom to son with autism urges ‘look for your people’