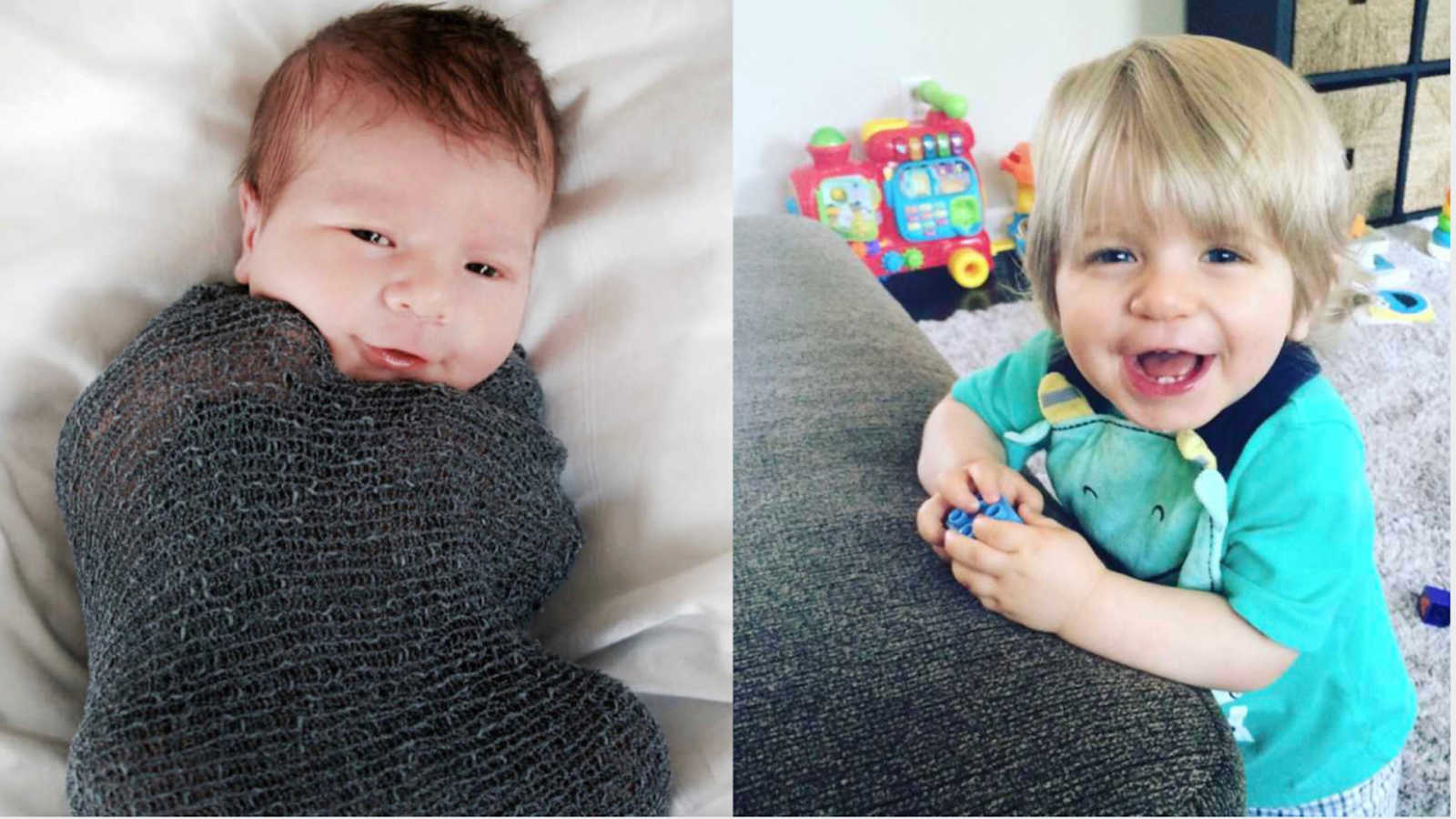 I always knew I wanted children from a very young age. And for some reason, I always hoped I’d have a little boy. Well the universe heard my wishes and a little over four years ago, we met our beautiful son, Noah. Being a first time mom I didn’t know what to expect. You can have all the guidance, old wives tales and baby books in the world — but it still can’t prepare you for what’s in store. And in my case, nothing really could. My motherhood wouldn’t be in the baby books anyways. And I would soon learn, I was very much on my own.

I remember at two weeks old Noah crying a lot. And he just seemed so uncomfortable all the time. And people would tell me, ‘Danielle, babies cry. That’s what they do!’ And I remember thinking, well it must be me then. This must be ‘normal’ and I’m just not equipped. Later we learned our baby was suffering from silent reflux and chronic constipation, both of which are not ‘normal’ for any infant.

Looking back at that second week of my little one’s life I wish I could have told my very innocent and naive self to buckle up because that was only the beginning. What I thought was hard was nothing. And that this life of mine was going to be one heck of a bumpy ride.

Getting My Son’s Autism Diagnosis

My son was diagnosed with Autism Spectrum Disorder on October 19th, 2017. It was few months shy of his third birthday. At that time his diagnosis wasn’t really a surprise. Not easy to digest by any means but we knew. Deep down we always knew our little guy was a tad different from his peers. The way he would nonstop sensory seek, his constant opposition and meltdowns, and the fact that he never spoke. He never quite met all the red flags when you go down the checklists. So for a time I didn’t believe he had autism. But as time went on and he became more difficult it became very obvious what we were dealing with. And we went full force with early intervention, OT, PT, and play therapy. We knew we couldn’t run from this and had to do everything available to us to help Noah.

Once we got that diagnosis, I remember foolishly feeling giddy. Like finally we have the answer and now it will be fine. He will get the services he needs, and this will all be okay. He will catch up, go mainstream, have friends, talk, and this ‘autism thing,’ will just be a part of his past. Like I said, foolish.

As my son has gotten older, some things have gotten easier, but some have undeniably gotten harder. One being that he is nonverbal. And what that truly means for him and our family.

When Noah was diagnosed almost a year and a half ago now, I wholeheartedly thought we’d have words by now. I believed with preschool and being surrounded by kids, doing the therapy and constantly practicing that he’d have a couple words. But here we are. Still nonverbal. And it can feel as though we are running out of time. Every so often I look at Noah’s school calendar on the fridge, and I count the months that have gone by with no words. And they just keep adding up. Pretty soon summer will be here. Another school year gone. A little boy still not talking.

I have to face what very well could be our future. And I’ve been slowly accepting that my son could be nonverbal forever. I hadn’t really prior to this year. I actually haven’t been able to say the words out loud yet. But like a lot of things in life, acceptance isn’t linear. It’s a process. And it can be ugly, with lots of ups and downs, and not a whole lot of grace. But I’ll get there, in time. My husband and I are very open and honest with our communication and we are constantly touching base with where Noah’s progress is and any regressions. We’re always on the same page and that is so important.

Currently he is using an AAC device which stands for augmentative alternative communication, we call it his talker. It’s on an iPad and you push pictures buttons to talk. It’s just tough when you thought it would all be temporary. That learning sign language and using an AAC device would just be momentary. A bridge till verbal communication emerged. Now having Noah become fluent with his talking device is my absolute number one goal.

Something has changed within the last couple months, and my son not speaking, has really hit me. Perhaps it was the time one of Noah’s classmates ran up to me and shouted, ‘yesterday I got a new dirt bike. I already have one, but I got a new one. And I rode it outside. And I fell, but it was okay. And…’ I had no idea preschoolers could talk so much. Or maybe it was the time I heard a friend’s daughter say ‘dada,’ and she’s only 18 months old. Or it could be all the extra time spent driving in the car with Noah’s chaotic schedule. And how the silence gets more and more defeating each and every time. I have a four year old, that has never spoken a word to me. I have never heard ‘mama’ or ‘I love you’ or anything that my kid likes, thinks or feels. And I don’t know if I ever will.  That’s hard for me. It’s one of the hardest things I will ever have to accept in this motherhood. And sometimes I’m so scared. I’m so scared for the future and unknowns that I can’t breathe.

But one of the greatest lessons I have learned for myself, is that I can’t live in that fear. Now is now, and although our days are harder than most, there is something good to be found in each day. I’ve learned that childhood is not one size fits all. And I’ve discovered a unique beauty within our chaos. How special my little one is. How capable he is. Noah is the hardest working person I know, and he’s only a few years old. He makes us so unbelievably proud. He bravely faces challenges that are not easy for him to overcome. But he does it, every single day.

As the years have passed I have grown and stretched in more ways possible. I have learned about my son. About autism. And we’ve wholeheartedly accepted and have embraced Noah for who he is. He is amazing. Simple as that. And together, we are breaking the stigma against autism. That’s our whole goal. To show people how beautiful autism can be. That it’s not scary. And that Noah is still a little boy first. A happy little boy who likes to laugh, smile and play, just in his own way. A unique way. Which shouldn’t uniqueness and individualism be something we all strive for?

As I’ve heard before, this journey is not for the weak, and that’s the truth. But just because something is hard, doesn’t mean it’s not fulfilling. Our home may not be filled with endless questions and stories, but it is a home filled with endless love. And our one of a kind son has taught us so much. About patience and empathy. About what’s important in life. How to fight for something greater. How magical a tight knit community can be. And most of all, that love doesn’t need words to be felt. People say Noah is lucky to have us, but honestly, we feel we are the lucky ones.”

This story was submitted to Love What Matters by Danielle Mager of Michigan. You can follow her journey on Instagram and on her blog Story of Noahism. Do you have a similar experience? We’d like to hear your story. Submit your own story here, and subscribe to our best stories in our free newsletter here.

Read other beautiful stories about children with autism here:

‘I spent hours searching, which told me my daughter had autism and was mentally impaired. I cried and cried for weeks, absolutely devastated my child was ‘not like the rest.’

“You just made my day. I’ve had the worst day ever.”