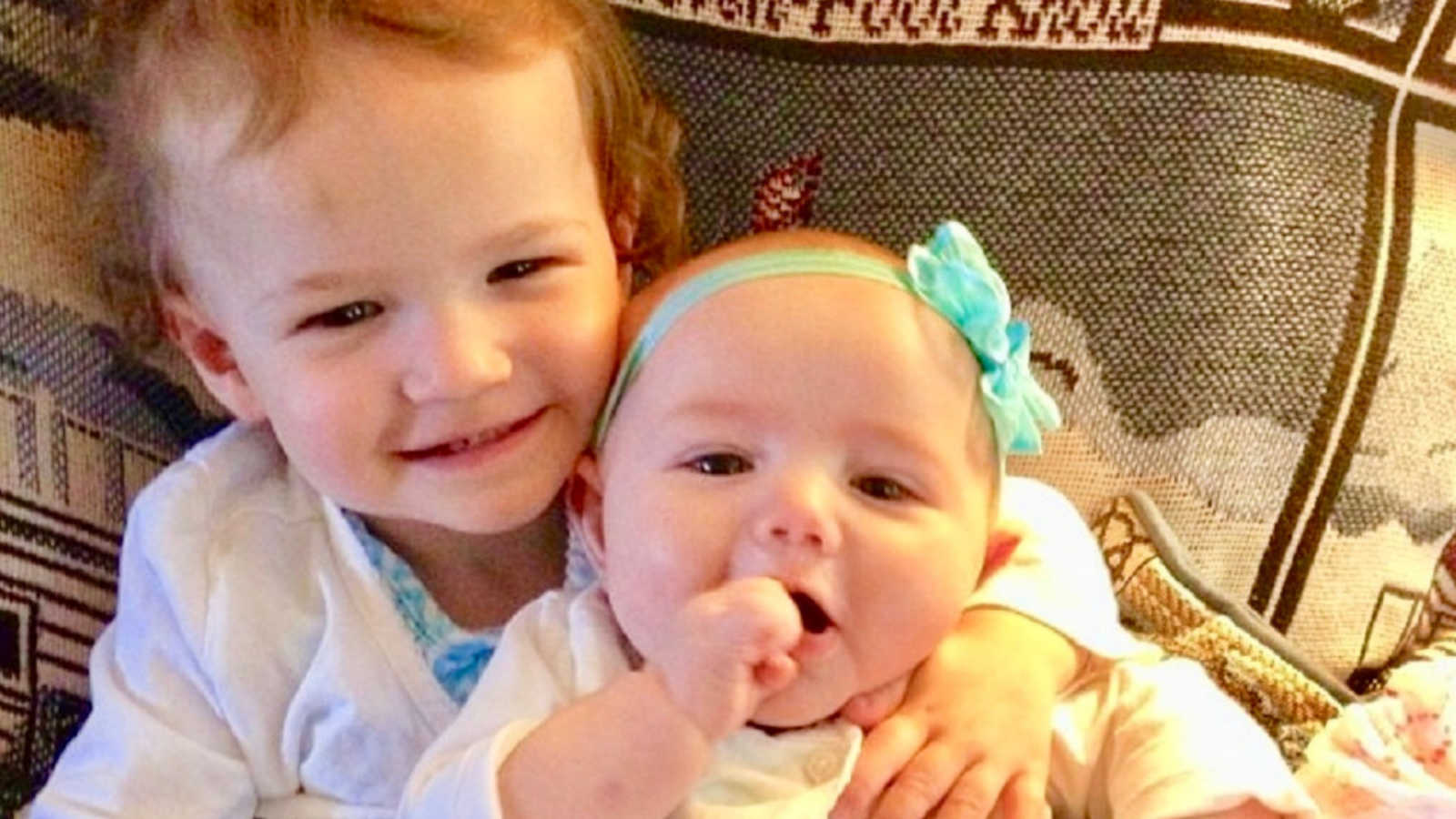 “Every new generation presents its own set of parenting challenges. I have no idea what it was like to raise children in the 1950s but I do know what it’s like to raise children in 2018. Most of the parenting advice I get comes from articles on the internet or from statuses fellow moms post on social media. ‘Internet momming’ is what I have always known. It’s become a love-hate relationship over the years.

My first daughter Presley was your typical ‘perfect’ infant. She breastfed right away, sleep trained really well, and hit all of her milestones exactly on time according to my multiple parenting apps. My second daughter Sawyer was born just 16 months later, and she had a fairly similar infancy as her big sis, just with a lot more crying. However, I started to notice she wasn’t ‘just like her sister’ around 9 months old. She still didn’t have her first teeth and she was barely babbling any words let alone many noises.

She walked around at a year old, but that’s when the ‘normal’ milestones ended. My friends with kids her age were raving about their kids’ vocabularies and how their kids ate all sorts of solid foods with their mouths full of teeth. I saw videos of these kids reciting the alphabet on their first birthdays and pointing out letters when they were 18 months old. I saw photo after photo of them with amazing captions that made this child seem like the next Einstein or President of the United States. It was SO hard not to compare Sawyer to them. I spent hours searching through Google which basically told me my daughter had autism and that she was mentally impaired. I cried and cried for weeks, if not months, absolutely devastated that my child was ‘not like the rest.’ I worried about her development and wondered what sort of life she was going to be able to live.

Sawyer didn’t cut her first tooth until she was 15 months and she didn’t say her first word (other than ‘mama’ and ‘dada’) until she was 2 years old. But then she hit 2 and she started to sky rocket. Her little personality finally blossomed in a new way and she started doing all of the ‘normal’ things all of the other little 2-year-old’s were doing. She went from being this little girl who barely did anything, to this little girl that could not learn things fast enough.

When Sawyer was 16 months old, I gave birth to identical twins. I didn’t know it then, but this was God’s way of proving to me that kids all do things on their own time…even when they have the exact same DNA. Our twins were preemies and the first baby that was born was named Lennon. Halen was the second born and came crashing into this world. They both spent two weeks in the NICU before coming home with their two big sisters.

I always just thought that identical twins would mean that they’d be, well…identical. I thought that they would have similar personalities and they would do similar things at similar times. After a few weeks of being home, Halen socially smiled first. I was shocked because at the time, my line of thinking was, ‘Lennon was born first,’ so she would be the first to reach a milestone. She’s only older by 3 minutes, but I still truly believed she would do it first! Then a few weeks after that, Halen rolled over first. It took Lennon two weeks after her sister to roll over too. Then Halen crawled first. Again, it took Lennon almost two weeks to do the same. Halen could sit up unattended first. Halen was interested in solid foods first. Halen could stand up first. Every single milestone Halen hit, it took Lennon almost two weeks to ‘catch up.’ However, Lennon did walk within a day of her sister.

You hear that all the time, the ‘every child is different’ slogan. Everybody loves to say it and maybe even you have thrown it out there before too. You think you understand what that means but then you scroll through social media and see someone else’s child doing things ‘better’ than your own. You see a child that’s the same age as your own writing full sentences when yours can barely even write the letters correctly. You see a child hitting home-run-like hits when yours can barely even swing a bat. You see a baby potty trained at 18 months when you’re still struggling with your 4-year-old son.

Compare, compare, compare. Are we being programmed to do this? Do we scroll and scroll on our phones to make sure our kids are good enough? It’s so hard to not compare your child. It’s so hard to look past the worry in the moment and not wonder what is wrong with your sweet baby. Worrying is part of the job in being a mom, but the internet definitely has heightened it for me in my parenting journey. I won’t say it’s all bad. I’ve learned about a ton of parenting topics I would have otherwise not known about. Social media has been a great outlet for me when I’m frustrated and need a pick-me-up from other moms. There’s good and bad with everything. It’s all about finding that balance and letting go of what we cannot control.

Today at 3 years old, Halen can write her name legibly and Lennon can’t even write an L. But you know what Lennon can do that her twin sister can’t? She can jump off of the side of the pool 100 times in one day by herself and totally submerge herself in the water. She can sit alone in the dentist chair and let the hygienist clean her teeth with every single tool and not be hesitant once. She can create fun for everyone around her just by taking charge and leading them to new worlds with her imagination. She can eat all of her food and be grateful she even got any.

My twins have taught me a ton about kids being their own person with their own timelines. Looking back, Sawyer was the first to give me this big lesson. I just wasn’t ready for the message. I would be lying if I said I still didn’t compare any of my kids to others out there. It’s easy to get caught up in the ‘my kid is better’ persona that can plague so many of us. But we really have to focus on what our kids’ strengths are. We all have to remember to foster THEIR interests, not ours or anyone else’s. We have to use social media to better ourselves and how we raise our kids, not hinder our view of what is ‘perfect.’ Our kids are perfect because they are the best form of themselves. They will blossom when they are ready.

Your child may not be able to kick a soccer ball like Jimmy next door, but they can sure draw a picture of a car better than any child their age. Give and take, give and take. Let’s remember to keep the comparing to a minimum and balance out all of that worry with some good ole fashioned wine and Netflix. Parenting is hard enough. Cheers!”