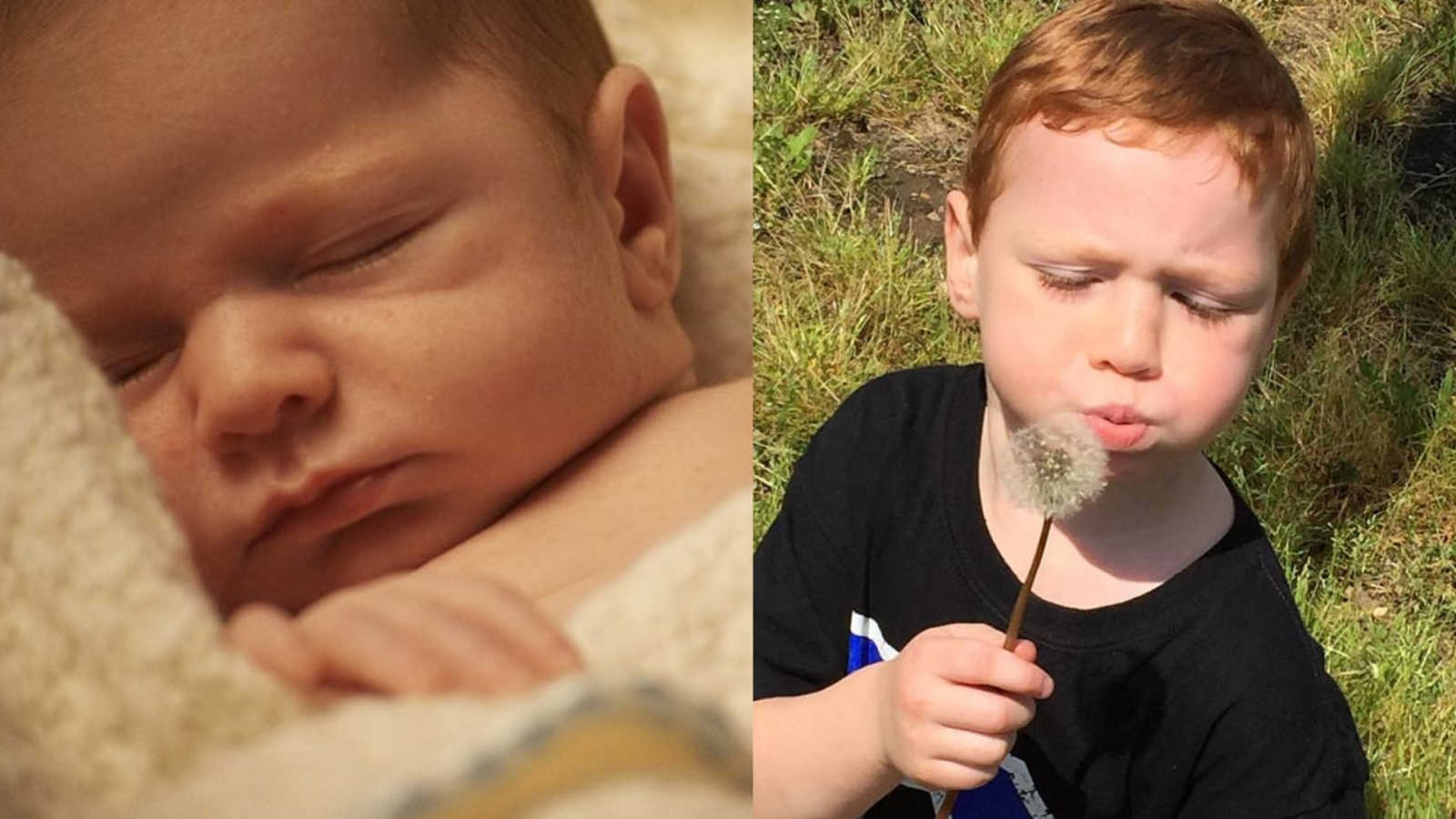 “My son is 7. He was born when I was 37. My husband and I desperately wanted a little boy. Before getting pregnant with him, I had a miscarriage in 2009. I worried because I was 35 at the time and felt like time was ticking away. A year after that loss, we discovered we were expecting him.

I was beyond excited when the ultrasound revealed it was a boy. We decided to recycle the boy name from our last pregnancy since it honored both of our grandfathers. My husband was relieved that the reign of females in our home would soon be tempered by this little guy.

Folks told me how wonderful the relationship between a mother and a son would be. What nobody told me was the breakneck speed at which this tiny boy would steal my heart. The most beautiful grey-blue eyes peered back at me after I delivered him. He was ‘sunny side up,’ meaning instead of facing my spine during delivery, he was face up. The labor was HARD, even for a wide-hipped mama who had already popped out two sizeable babies.

He entered the world noiselessly, no cry. My husband claims he looked around quizzically instead. When he was born, I didn’t even ask if he had all his appendages. I asked if he had red hair. He did. Another baby ginger in our home. My trifecta!

He was a fat, elfish little thing, looking like a wise old man. Of my three children, he was the most peaceful and easygoing. This was clearly a fiendish trick to lull me into thinking he’d be an easy child. He ate well, slept well, and all of the things that mamas dream of. I was smitten.

As he got older, the peaceful baby became a spirited toddler, fearless in any circumstance. He was especially fond of climbing and walking on furniture, which I always feared would result in head injuries or stitches. My kitchen drawers became stairs if pulled out just-so. Heart attack-inducing stunts were the norm now that he was around.

More complex acrobatics soon followed. I was forced to switch from curtains to blinds in the family room because his wild cartwheels across the furniture had yanked the rod from the sash one too many times. In over 20 years as a parent, I never considered my interior decorating being swayed by a desire for damage control.

Along with ninjalike qualities, he developed a temper of epic proportions as a preschooler. His anger was channeled in a series of shocking actions that didn’t seem congruent with the angelic baby he once was.

I once heard a frantic screaming from upstairs. My daughter had gone into the bathroom to use the toilet. This provoked the unbridled anger of her brother. She’d gotten to the toilet first. Infuriated (and apparently forgetting we had another toilet), he nonchalantly stood at the ready and peed on her in retribution.

Another bathroom fisticuffs a few years back involved a rumbling and clatter that seemed uncharacteristic of the bathroom. Shouting ensued. I burst in to discover that my son had hurled a carry-on suitcase into the shower at his sister. Lather and crying erupted from the stall while I hoisted the soaked luggage from her feet. He peeled out of the bathroom in gales of maniacal laughter.

For as unpredictable as the boy can be, he is brilliant. When cleaning his room once, I stumbled upon a shoebox-full of candy under his bed.

‘My mustaches!,’ he exclaimed.

The candy was a front for his stash of fake mustaches that was hidden under a sheet of construction paper that was under the candy. Yes, he had a stash of staches. This is criminal mastermind level stuff, folks. I sometimes worry when I see him drawing up schematics and concocting disguises.

He’s also got swag with the ladies. When my daughter was 9 and he was 4, she had a friend come over for a playdate. They were having a tea party in the dining room when he sidled up to the table, took one look at her, and spoke.

‘Hey, Alyssa. That ponytail sure looks good on you.’

What 4-year-old says that?

My husband jokes that he’s not sure where the boy gets his mojo from because he certainly didn’t teach it to him. Though he’s so young, he knows what he likes – blondes. He was at one time smitten with our youth pastor’s wife.

‘It’s a good thing you and Pastor Josh are already married,’ he told her once.

She laughed and tousled his hair, which I’m certain was his desired effect. We’re trying to work on subtlety around here, as you might well imagine.

As I consider his fast-approaching 8th birthday, I think of all the things to love about this freckle-faced little boy. He’s an awesome snuggler. He’s wild and funny. He’s a gentleman. He holds doors for people and carries his cousin’s backpack for her when we pick her up from school. He tells jokes and reads piles of books. He tells me he’ll always love me, even when he’s a grown man.

I sometimes joke that he’s the one I should have had in my youth. Truth be told, he’s exactly what I needed when he showed up. I’ll love him always also, even when I’m an old woman.”

This story was submitted to Love What Matters by Tracy Cooper of Earl Grey and Yellow in New Jersey. You can follow her on Facebook. Submit your own story here, and subscribe to our best stories in our free newsletter here.

‘I found out I was pregnant at only 17 years old. The news rocked my parents’ world. I was smart in school and dumb in love. I always knew I’d have the baby.’

Give other boy moms a good laugh. SHARE this story on Facebook with your friends and family.