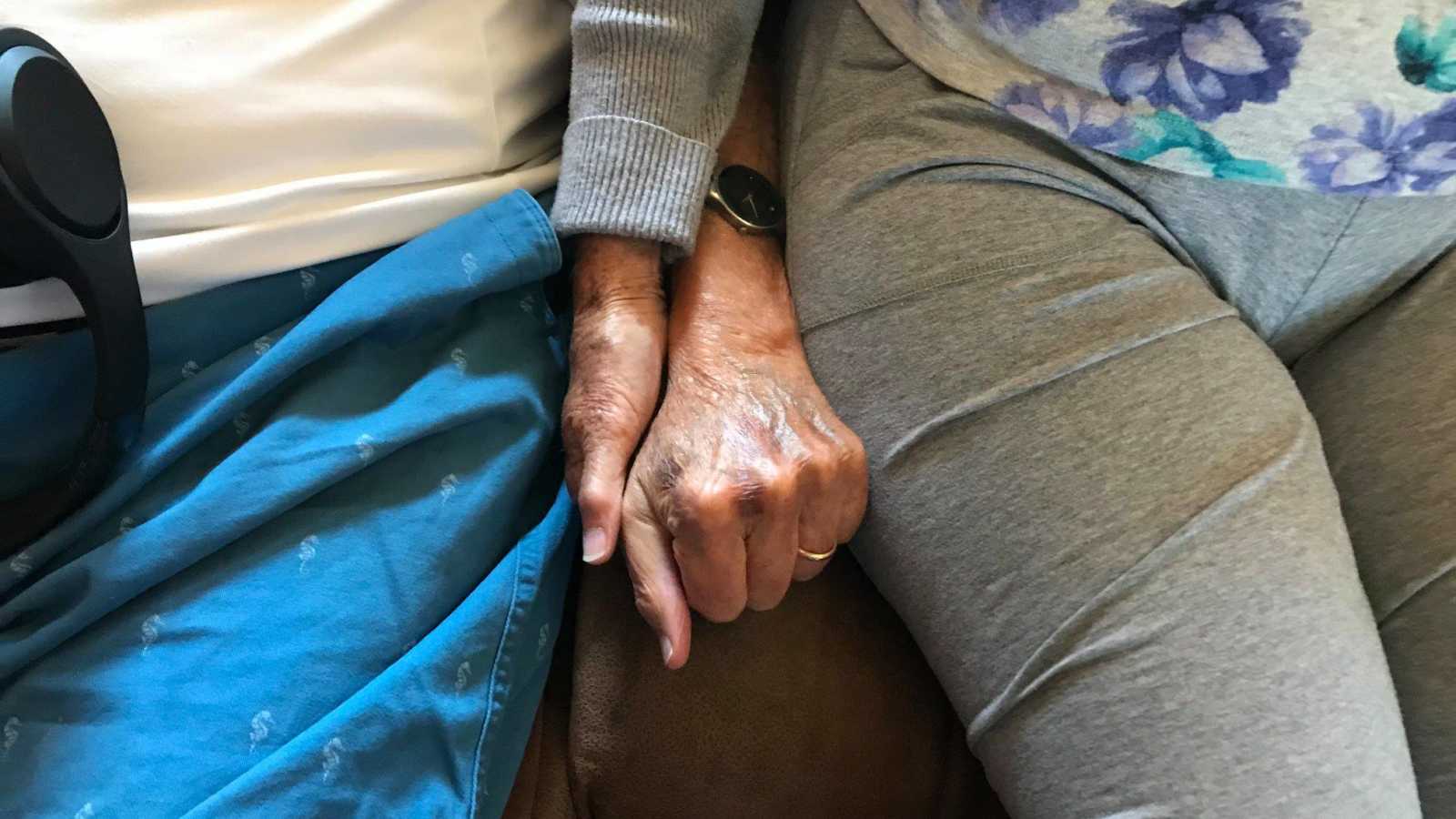 We noticed for a week or so that Dad seemed as though he was winded more than normal. We blame most things on his mental, emotional and physical exhaustion and lack of sleep. Although we have 2 caregivers and my Aunt, who is staying with them for a few more weeks, my mom still wants my dad to do a lot for her – and he won’t tell her no. The caregivers are great at not giving her a choice and gently move her on to do many tasks with them before she can demand that “Carl does it.”

Last Sunday at breakfast, my sister Mary Ann is talking to dad and he says he thinks after breakfast he should go see a doctor. He said he doesn’t feel quite right. We said we would take him right away but he wanted to stay with everyone through breakfast, which he did. My brother, Kris, headed out with him right from breakfast while mom was insisting she go along. We tried to tell her it will make everything much harder if she goes with him. She doesn’t care. Dad is saying she can go along but we pretend we don’t hear him. Mom is angry. We walk her home and point out everything we can to distract her from dad leaving with Kris. She seems better than we expected. For Kris and Dad it turned into a long day.

They head to a walk-in medical facility where they did an EKG. It had a slight abnormality but nothing that made the doctor panic. He recommended Kris take him to the ER so they could run more tests – but again, no ambulance, just a recommendation for more tests. Off they go.

They get to the ER and run more tests and because dad is 89 they decide to keep him overnight for observation. Kris stays until they get him in a room that evening.

Mom, my Aunt and the caregiver head to the pool (behind the office) during the afternoon. Mom used to love the pool but hasn’t been in it for at least a year – if not two. We get her wheelchair up to the pool and we help her up so she can sit on the steps of the pool with her legs in. She loves it. They stay for awhile. No one mentions dad. We are debating who is going to tell her he won’t be home that night. I’m not sure who ended up telling her – I know it wasn’t me. My Aunt realizes she will be sleeping with her sister (my mom) tonight since my dad won’t be home. We find some humor in that and once again find that laughter helps us get through the day.

Morning comes and they get mom ready and head to the hospital to see dad. They are going to release him and have him do a follow-up with his doctor. Dad is out of sorts and mom is quiet but concerned. After a few hours of doctors in and out they finally get the OK for him to go home. Good news, right? WRONG!

Once they are home dad won’t stop trying to explain to mom everything they did. Everyone tries to tell him to stop and he gets agitated with them. He continues to explain things she does not, nor will, understand. He didn’t like being at the hospital overnight. He didn’t like that we didn’t bring mom to see him the night before. He didn’t sleep well, he was not himself, which made for a very bad day for him and for mom.

Once again, I stayed clear of the mayhem. I got text updates that were not good. Mary Ann came back to the office after stopping in and said it was not going well. She asked if I was stopping on my way home from work. I think my exact words were, “No way! Do you think I’m crazy?” I headed directly home.

I stopped the next morning and things seemed back to our normal. Mom was sitting next to dad rubbing his head. He was dozing off and every time he was almost asleep she would say, “Are you tired Carl?” and he would wake up and say, “Yep,” before falling back to sleep to be woken again in a minute or two. He didn’t seem frustrated by her interruptions – for him it was just another day.

Mary Ann and I are taking dad to a follow up appointment tomorrow. We are hoping they can distract mom long enough for us to sneak him out the door without her noticing. Wish us luck!

This story was submitted to Love What Matters by Becky Gacono of Annville, Pennsylvania. She is chronicling her mother’s dementia journey on their Facebook page and in a series of posts for Love What Matters:

‘Umm… your mom is sitting on the floor. She tried to get up by herself.’ ‘I’ll be right there.’

‘Mom thought her mother had died – that day!’ Elderly woman with dementia devastated over death of mother 70 years ago

‘I see Dad wiping his eyes. I realize he is crying.’ Elderly man devastated his wife with dementia thought ‘everyone left her’

Wife with dementia ‘listens’ to husband’s story for 15 minutes before cracking a joke, which ‘gives him a sliver of hope she is still there’

Submit your own story here, and be sure to subscribe to our best love stories in our free newsletter here.