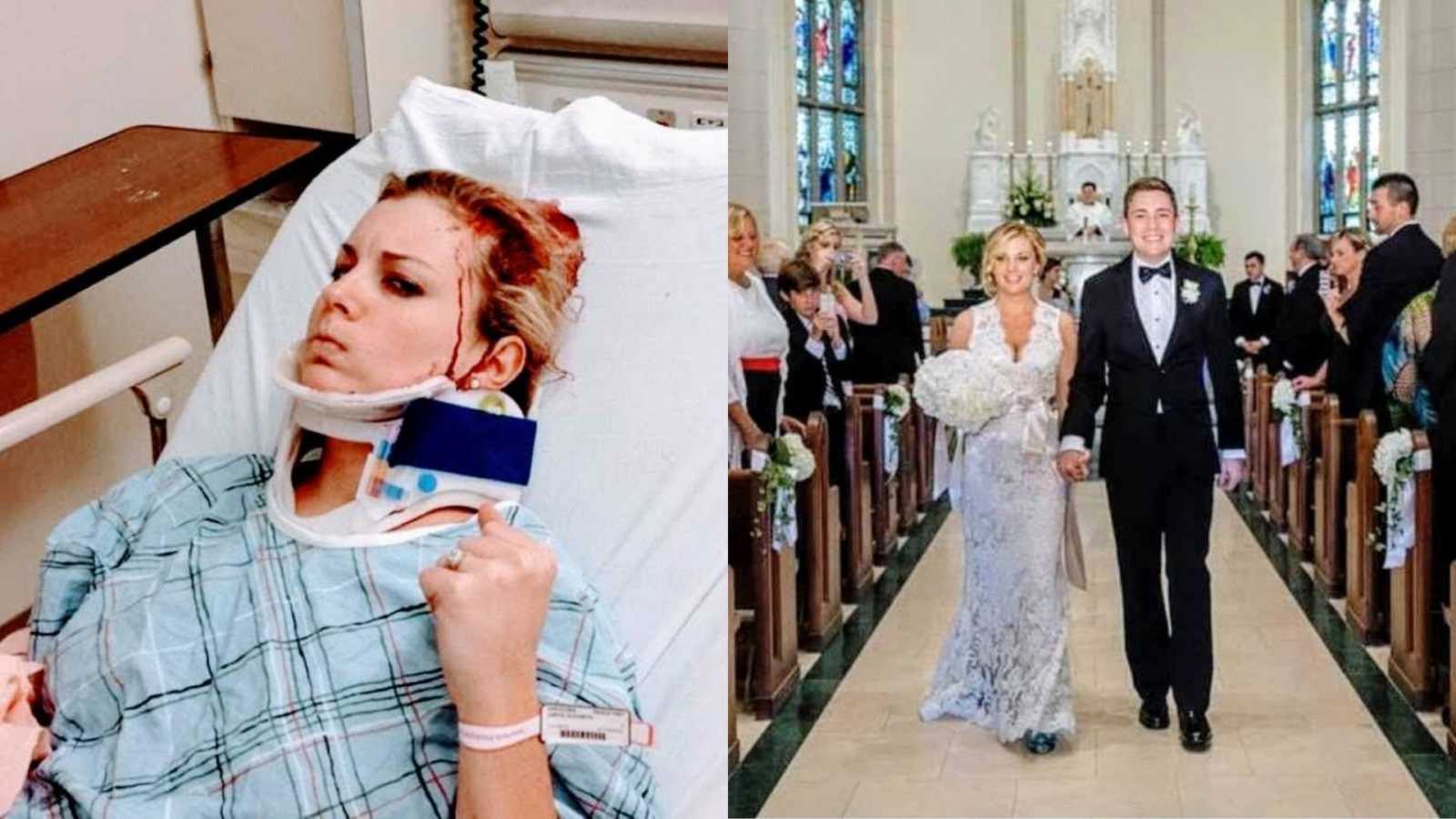 “I am no love expert. I’m no psychologist nor am I a couple’s counselor. I’ve never run an advice column nor am I a pastor, rabbi, or shaman. I didn’t even write my own wedding vows. All I know about love I learned from watching my husband, Steve, who taught me the importance of ‘in sickness and in health’ way before we ever said those words.

Steve and I met in New York City in December 2010, where we were both working at the time. I wouldn’t call it the most romantic start to a relationship – it involved a seedy bar and plenty of tequila shots. Although the background wasn’t picturesque and I had never been in love before, I still knew immediately I loved him. Maybe it was the way he made me laugh or maybe it was the fact that when he smiled, his eyes lit up. Whatever it was, we just clicked.

After that night, we were virtually inseparable. He met and was interrogated by my parents within a few months, and his parents came to visit shortly thereafter (luckily for me I was not interrogated). Since we were spending so much time together and rent in New York was expensive, we decided to move in together. Steve came from a conservative Midwest family, so to say this decision ruffled a few feathers would be an understatement, but we were in love.

It was this controversial decision that saved my life many times over because after several months of living together, I started experiencing grand mal seizures. The first seizure I had while standing in our living room – I use the term living room loosely since we lived in a studio – and my head hit the coffee table, resulting in 17 staples. Had Steve not been there, or had I been living alone, I most certainly would have bled to death. I have very few memories from that day, but the first thing I do remember is waking up in the emergency room with Steve holding my hand and trying to lift my spirits with silly one-liners.

Along with seizures, I also experienced memory loss, depression, insomnia, and an inability to translate my thoughts into coherent sentences. But the hardest part of it all was my denial. I had convinced myself I was still fit enough to work full time, even though I wasn’t sleeping and had serious short-term memory loss. At one point, my denial was so deeply-rooted I became angry when someone offered to pray for me. To this day, I can’t imagine how difficult it must have been to take care of someone who was deluded into thinking they were healthy. Despite it all, Steve stayed.

He had every opportunity to leave me. I was crippled both mentally and physically with no promise of a normal future. At this point, no doctor had been able to discover why I was experiencing all these symptoms. Instead, we watched them scratch their heads and say, ‘Well, the brain is a mystery.’ We had no idea what tomorrow would look like and didn’t even talk about what would be happening in ten years. When most men in their twenties would have walked away, Steve had the courage and devotion to stay by my side.

And rather than leave, he proposed. He got down on one knee and asked me to marry him, saying this was the easiest decision of his life. He could see our love was stronger than the forces that were pulling me down, and he used our love to keep me afloat.

Several months went by and I had a particularly bad seizure that required a multi-day hospital stay. At the time, he was working 100-hour workweeks as an investment banker, but he paused all of it and never left my side, using the down time to put together our incredibly cheesy wedding website, which I teased him about mercilessly. Again, the doctors made little effort to try to explain my seizures, instead saying we just needed to find a medication that would keep them under control.

This is where my mom came in. She spoke to a neighbor whose son had epilepsy, which had been triggered by Lyme disease. With nothing left to lose, I went to a specialist and went through a series of tests, and after over a year of debilitating seizures and other symptoms, I finally had a diagnosis: Chronic Neurological Lyme disease. But the diagnosis came with no concrete outcome. I would receive IV antibiotics, infusions, and a slew of medications without knowing definitively if the Lyme was gone. But a diagnosis is better than none, so we were happy. Again, Steve rose to the occasion – he learned to administer my IV antibiotics, came with me to infusions, kept track of all my medications, and even helped plan our wedding. Throughout it all, he did it with a smile on his face and a corny joke on his lips. Laughter was his form of medication, and it made my heart feel so full of love.

But his devotion went beyond my own wellbeing. Even while taking care of me, he made sure to address my family’s concerns as well, understanding I was in no position to advocate for myself. At one point during my treatment, we were meeting my family for Easter Vigil, and the antibiotics had taken a toll on my body. Rather than let my family wonder and worry, he told them, ‘She’s not ready to talk about how she’s feeling, so please let me answer all your questions.’

After a month of treatment, I rallied enough to walk down the aisle, although I was still not myself. To this day, I do not remember any of the rehearsal dinner, and I took a nap between the ceremony and the reception. I even went so far as to try and convince Steve to let me take my wedding dress off for the nap, but Steve recognized if I took that dress off, I would never have the strength and energy to put it back on. Despite the various ways my illness affected our wedding day, we were still able to recite our vows before family and friends. And given everything we’d been through that year, it made those words all the more meaningful.

Unfortunately, my Lyme disease came back shortly after our honeymoon and I had another seizure while walking down the street. This time, my husband caught me in his arms (which is not as romantic as I thought it would be!) and kept me from hitting my head or otherwise hurting myself. So, it was back to the Lyme specialist I went, where I had another PICC line placed and went through another five months of IV antibiotics in addition to oral medicines. But this time the treatments worked, and I am happy to report my Lyme is dormant and I’m seven years seizure free. Seven years!

Now that everyone is healthy and we’re chasing around three kids, Steve and I show our love more in small acts than in grand gestures (although Steve, if you’re reading this, I love grand gestures, especially when they come in the form of diamonds). We have made saying ‘I love you’ a cherished ritual, and every few days or so we take time to dance to our wedding song. It may seem a bit cheesy, but it’s how we reconnect with one another and share our devotion. We also spend plenty of time making fun of each other because laughter is good for the soul. He pokes fun of my errant chin hairs, and I make fun of his aggressive gum chewing. We understand that regardless of what life hands us, we can conquer almost anything as long as we stay dedicated to one another and never forget to laugh.

Looking back on the start of our relationship and how we stayed together despite the challenges we faced, I’ve come to understand love is a dynamic force. It requires both laughter and silence, both sacrifice and compromise, both grand gestures and small acts of kindness. But most of all, love is not just saying those marriage vows at the altar, or wherever you say your I do’s, but also acting out those vows every day. It means waking up each morning and choosing to love one another regardless of our faults and showing that love through our own actions.”

This story was submitted to Love What Matters by Preston Isom. You can follow their journey on Instagram. Submit your own story here, and be sure to subscribe to our free email newsletter for our best stories, and YouTube for our best videos.

‘I’m going to die young.’ Tears rolled down my face as I held his hand. That day, I became an 8-month pregnant widow.’: Woman re-marries after losing husband, ‘I had two happily ever afters’

‘I can’t go to juvie! You don’t know what they DO to people there!’ She choked out, ‘Will you be my parents?’ We were 23, newly engaged. Already a teenager, we were her only option left.’: Young couple adopt 5 children into ‘forever family’

‘I was declared infertile. ‘If we need to part ways, I get it.’ I thought for sure this was the end. Instead, my partner got down on one knee. ‘Will you marry me?’: Woman battling infertility thanks husband’s unrelenting kindness