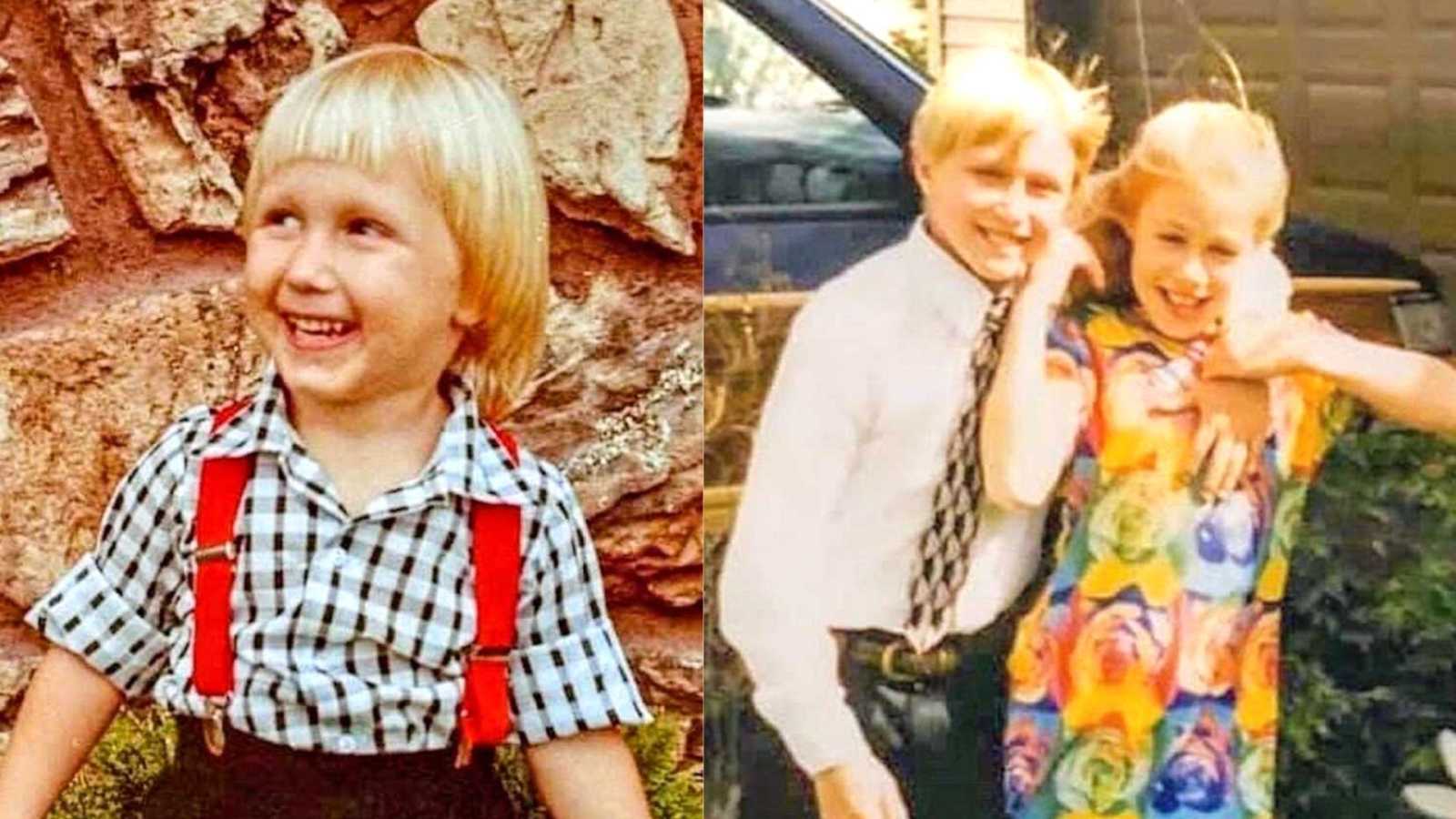 “I adore my older brother. He means the world to me. There isn’t anything I wouldn’t do for him if it meant he would be happy.

My brother and I are 18 months apart in age, so we went through the same stages together. Parties, drinking, experimenting, and driving our parents a little crazy. We always had each other’s backs — we got our stories straight before sending them off to mom and dad for approval. Together we made an invincible team, both always busy and lots of friends.

But my beautiful brother had somehow become a serious addict.

Hindsight is always 20/20, they say. Living with my brother’s addiction has certainly convinced me this is true. For years, my brother struggled and struggled some more. No one knew just how bad it was until it was bad enough to know. He moved from pills to heroin, and chaos ensued.

I felt such guilt as a sibling when I discovered that I was the one who survived the haze of those years unscathed. It’s like names were pulled out of a hat, and I got lucky. I got to move on with my life while my brother went in and out of jail and dealt with his addiction. We were all so fragile and scared and so ill-equipped. I craved knowledge and understanding and peace. I watched my family wilt and fade. This was the hardest part of all, to see their sadness and helplessness.

Discussing an addiction is a difficult thing, especially at a young age and in a group of peers and society where, if you’re an addict, you’re considered to be unworthy, and yet overindulgence is socially acceptable. I had to alter my own beliefs and ideas of addiction and was not yet ready to fight against the stereotypes of others. It was a lonely and confusing time. Every time I called home, the updates grew more and more depressing. The conversations were always about him: my brother, the addict. And although my parents were emotionally exhausted, they refused to give up.

For years, I stood by and watched my brother go from a fun-loving, always smiling, thoughtful man who was a phenomenal outdoorsmen, a hard worker, and a super family-oriented guy to an angry, withdrawn, zombie-like creature who didn’t care about anyone or anything, even his own existence. My brother lied, constantly shifted blame, and he broke the law many times – sometimes he served real consequences, and sometimes he didn’t. All the while, he presented no remorse for his actions. The heroin didn’t allow him to. The heroin changed his behaviors, his priorities, and his brain chemistry. The heroin stole my brother.

During my brother’s relapses, our relationship seemed to collapse, and during times of recovery, we made the effort to rebuild what had been lost. This continuous rebuilding is what took the most strength and was the most exhausting. After the tears dried, I’d listen, trying to understand and forgive what he had done. The forgiving was always faster for my parents. They carried him endlessly through relapses and recoveries. As time went on, the debates between my parents and I on how to deal with my brother grew sharper and louder. He was taking up so much time, money and energy. I did not have to forgive him as quickly or support him as readily because he was not my child. As a sibling you can keep your distance, but my parents felt that distance, and it was hard on them. In the end, I would always relent and let my brother know that my love and support would always be there for him. It just took longer sometimes – to tell him, to see him, to hug him again.

I quickly learned nothing could save my beautiful brother until he decided to save himself.

Most days, I just felt like I was watching him die. Everything about him tells me he’s done, he’s spent, he wants out. We are the kids swinging in the playground, holding on tight to each other’s arms, faster and faster — but who will let go first? I don’t want him dead. I love him desperately. I just want him to find peace. He was on the edge of overdosing at anytime and our family was in a great divide, and he was the reason why. Death just seemed more realistic than sobriety for him. And the fact that I felt that way made me sick.

About a year and a half ago my brother made many attempts to quit. He would lock himself in his room literally puking, sweating and shitting for a week until the drugs had finally left his system. My mom and I spent hours upon hours trying to find a rehab for him. We knew without support and guidance, his attempts towards sobriety would be short lived. We quickly became discouraged at the lack of support out there that didn’t require a large amount of money that we didn’t have on top of my brother’s not having insurance.

My brother then lost his job trying to recover from his addiction. He lost things a lot more important than I can even begin to describe.

It was never preferable to live the way he did rather than how he would have liked, which is why, even when I felt hopeless, he never lost his faith that one day it might get better. He never stopped making plans to stop using. He always hoped that a better, happier life was waiting for him on the other side of sobriety.

It took a while for me to trust his sobriety after he finally hit milestones he never had before. One month, two months, three months and so on. I didn’t truly believe it until the day I needed to count on him. My brother had promised many things, many times throughout his addiction, but they always seemed to become dust in the wind. He would say he’d be somewhere and not show. Tell you he’d pay you back the money he owed you and you’d never see it again. Talk about many great things he was going to accomplish that never seemed become a reality.

Last fall, my brother promised me he would help me move into my first home. That he would bring friends and a trailer and do it all. I wanted so badly to believe him, to trust him again. I started to make a plan B, believing that once again, I may not be able to count on my brother. But to my surprise, he showed. He and his friends brought a trailer big enough to pack up my entire place in one trip and loaded and unload the entire thing within hours. That was the moment I felt I had my brother back. The moment he was there when I needed him most.

Today, I am able to say I have a brother still here to love. A sober-for-one-full-year brother. He’s back—the fun-loving, always smiling, thoughtful man who is a phenomenal outdoorsmen, a hard worker and super family-oriented. He attends weekly meetings for his addiction through Sober Eyes, a support group for addicts, and family of addicts. I was able to attend one with him over the holidays and it was pretty amazing. Seeing him light up with the support he is given there brought me to tears.

Though the road he has taken has been tough, and sometimes I wondered how he would ever get here, he’s made it. He never gave up, and my family and I never gave up on him. And now I have a recovering brother whom I love very much, and I’m so grateful to have him, version 2.0.

Airbear, I cannot even begin to explain how proud I am of you every day for the work you put into your recovery. You go to meetings, you talk to me, you’ve been so open and honest through all of this, and for that I am eternally grateful.

My brother is back.”

This story was submitted to Love What Matters by Alexis Kipp. You can follow her journey on Instagram here. Do you have a similar experience? We’d like to hear your important journey. Submit your own story here. Be sure to subscribe to our free email newsletter for our best stories, and YouTube for our best videos.

‘She said, ‘It’s your dad. There’s something wrong. The cops said they found him on the ground.’ We still had so many questions.’: Woman details life with drug-addicted father, ‘I’m not mad at you’

‘Please check on your people with a history of addiction. We’re not okay, and honestly, we don’t have the courage to tell you.’: Woman urges ‘we just need to know it’s going to be okay’

‘It took an overdose to come to the conclusion I was not the young woman I was raised to be. Suddenly, everything began to click.’: Transgender man advocates for support in the ‘addicted trans community’