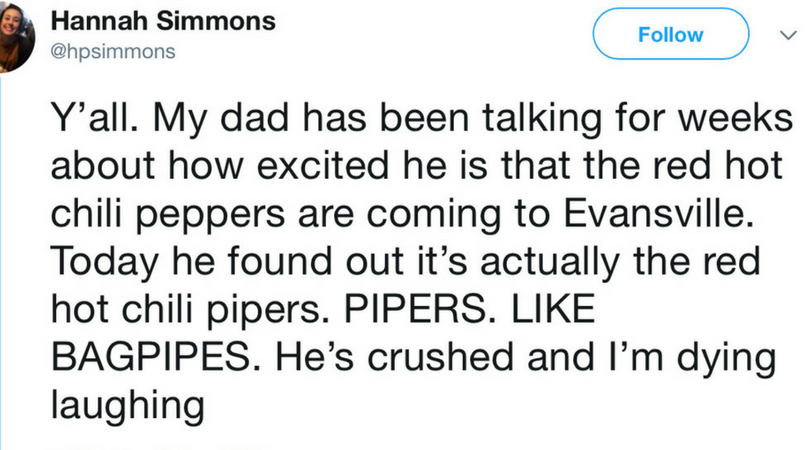 “I was driving around Evansville, Indiana, and saw a billboard for what I thought was the Red Hot Chili Peppers coming to The Victory Theatre in August. I was driving, so I didn’t get a great look at the billboard, but I caught a glimpse of some guys in red and black that I figured were the Chili Peppers.

Having grown up in Long Beach, California, and having lived here in Indiana for nearly 20 years, I’ve never seen a band come through here that wasn’t country, hair metal or classic pop rockers (Elton John comes here quite often), I was excited. A band from my old stomping grounds was coming to Evansville.

I can’t remember how I told Hannah, my 20-year-old daughter who is home from college on summer break about it, but I know I did. Multiple times. I kept saying I couldn’t believe such a great band was finally playing Evansville. Part of me was always questioning it, but I saw the billboard, so it had to be true. My wife, Penny, was also in on the conversations and would eventually be the one who would crush my dream. It seems her fitness instructor has a husband who works at the venue where the band was playing. Hannah was home when Penny broke it to me. It was the Red Hot Chili PIPERS coming to town, not the Red Hot Chili PEPPERS.

I didn’t cuss (out loud anyway), but I did voice my disappointment for an extended period of time. Disbelief. Anger. Sadness. Bitterness. Yep. I went through all the stages before calming down and accepting the fact that I had been right all along to question the coming of the band. I had finally come to terms with it.

Y’all. My dad has been talking for weeks about how excited he is that the red hot chili peppers are coming to Evansville. Today he found out it’s actually the red hot chili pipers. PIPERS. LIKE BAGPIPES. He’s crushed and I’m dying laughing

I thought it was kind of funny when I saw it Tuesday evening. A little sad, but still funny. She had close to 500 likes on the tweet about 12 hours after she made it and I joked that it might be her biggest tweet response ever (that was a picture of a sign at a car wash concerning Evansville native and Olympic gold medalist Lilly King and her Russian rival).

The rest of the day (I hate to admit) I checked it out periodically and watched it keep growing to more than 100,000 by dinnertime.

I’m not sure where it’ll all end (currently closing in on 250K), but it has been fun reading some of the comments. I especially liked reading the ones stating I wasn’t the first to have been duped by the Pipers. Misery does love company. Will I go see these guys? Well, I heard they play a lot of pop music. I’m not sure adding bagpipes would be an improvement on that, but it certainly couldn’t hurt.”

This story was submitted to Love What Matters by Denny Simmons of Indiana.  Submit your own story here, and subscribe to our best stories in our free newsletter here.