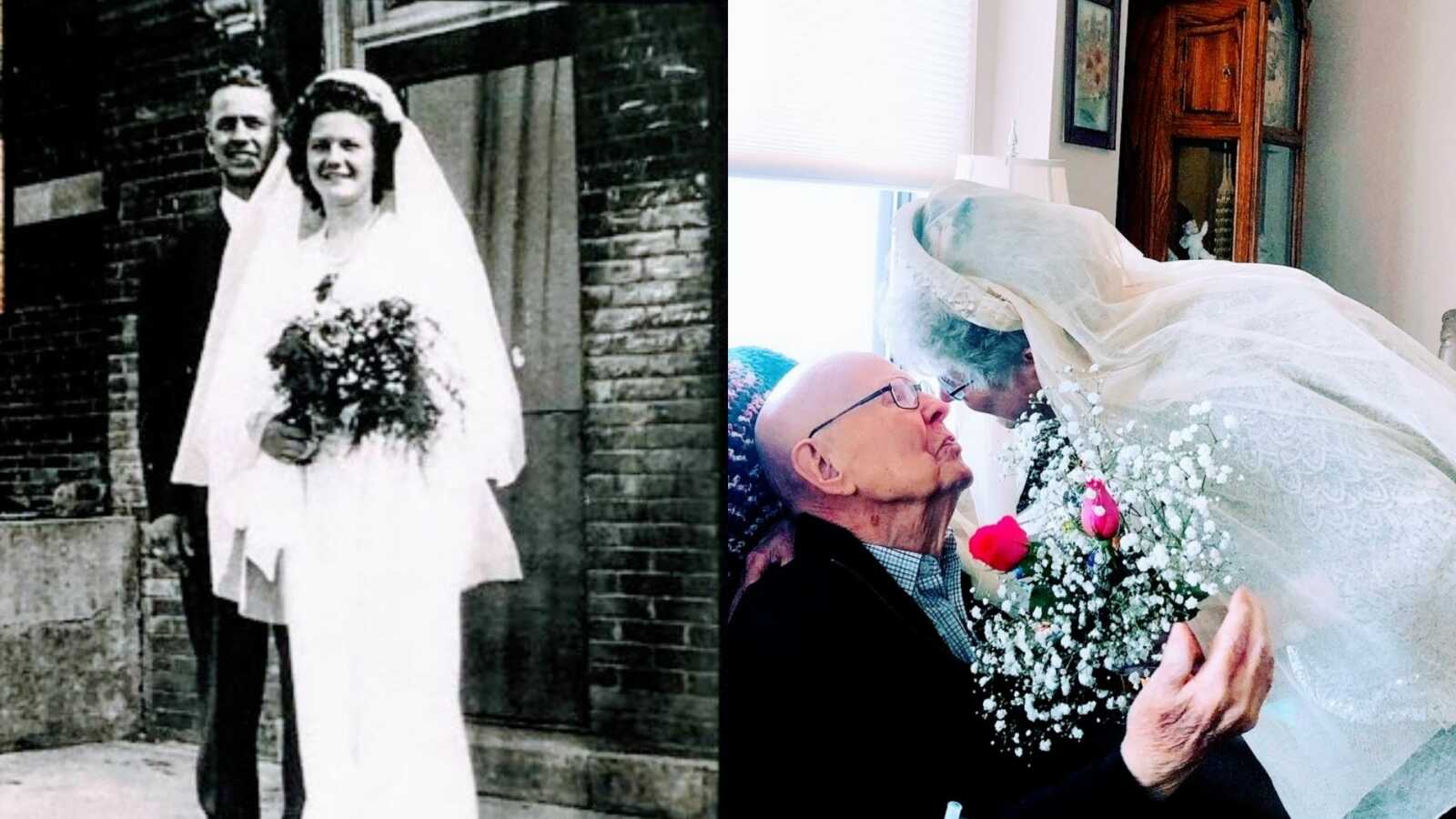 “My Grandma and Grandpa’s love story is one that would make Hollywood envious. It’s 75 years of wedded bliss – not because it was easy, but because they are committed to love each other well.

My Grandma reminisces of how they met at a church dedication in 1940. She was 14 years old and my Grandpa was 15. It’s only suitable they met and fell in love at a church dedication because my Grandpa has been a pastor his entire life.  My Grandma says, ‘We had dinner in the church and then after we went outside to play a game. We played tag and I remember Jerry looked so sharp. He had a sportscoat on with dress pants and a very fancy silk handkerchief in the pocket of his coat. In the tagging and running around, I grabbed the silk handkerchief and he tried to get it back from me and we tussled back and forth. I’ve never given the handkerchief back to him. I’ve kept it to this day, 80 years later!’

My Grandma says a few years later things started to get serious. She was 18 and my Grandpa was 19. They got caught up talking about the future, buying a home together, and what their life might look like and then my Grandpa stopped her and said, ‘Well we better start from the beginning. Will you marry me?’ My Grandma remembers my Grandpa showing up to their wedding on June 18, 1946 wearing a dirty shirt and cap after he had been logging all morning. She said she was mad, but he showed up with wild roses for her and the rest is now history.

My Grandpa says he remembers their wedding day like yesterday. He said, ‘I was blissfully happy and I remember our wedding song was ‘I love you truly.’ it was a wonderful day and I was so happy.’ My Grandpa told me many times their life has not always been easy, but God has been so so good to them. He says the only way to make a marriage last, like theirs has, is to both love Jesus and each other. In that order. So much of life is a grind. It’s everyday and can be mundane, but the everyday is what makes up your life. The mundane they have lived for the past 75 years together has created one epic love story.

Fast forward to today, they have 5 daughters, 18 grandchildren, and countless great grandchildren. They just celebrated their 75th wedding anniversary. My Grandma put on her wedding gown and veil and walked towards my Grandpa sitting in his chair. He’s gotten so weak, but was still dressed to the nines. Suit coat, a flower and a huge smile. His eyes lit up like it was their wedding day. They had all of their daughters around them and other family tuned in via FaceTime. The love and joy in the room was palpable. You see, a few months before we didn’t think my Grandpa would make it to celebrate this day. He was put on hospice only a short time before their big celebration.

My Grandpa attributes their 75 years of marriage to the fact my Grandma is loving and forgiving of him. My Grandma said she still wears her original wedding ring they purchased together for $75. She showed it off to me the other day, saying Grandpa bought her a new band for their 75th anniversary to go with her wedding ring. 75 years later and she is still wearing the same ring with memories aplenty of their time together. I know this anniversary meant the world to them. It was not only a huge milestone, but I think they knew it might be their last.

My Grandpa fell and broke his hip shortly after their 75th wedding anniversary and they were unable to live together due to my Grandpa’s increased needs. Because my Grandpa was also on hospice and they never imagined living their final days apart, they chose to charter a flight to relocate to live at one of their daughter’s houses. This allowed them to get the care they needed, but to also spend each of their last moments together. As they took their flight together, my Grandma’s face beamed with joy knowing now she could spend Grandpa’s final days with him.

What makes my Grandparents’ story so legendary isn’t any magic, or something they had no one else did, or lots of money, or a perfect life. It’s just the love they had for each other over a long period of time and how that love spilled over onto everyone around them. Whether it was neighbors, their family, the churches my Grandpa pastored, or random people they would meet, their life was defined by love.

The example they have set in our family is nothing short of incredible. Watching my Grandma, with tears streaming down her face, my Grandpa beaming with joy, reenacting their wedding day is the love story we all need in today’s world. Their love story has taught me anything worth doing is going to be hard, but that’s what makes it worth while. If it came easy, everyone would do it. What makes 75 years such a celebration is there was 100+ times throughout their marriage they could have given up and they didn’t. They didn’t choose the easy road, but they chose the road that will reap the benefits for generations to come, now affecting my own family.

The memory of my Grandparents isn’t a one time event or a specific day where something incredible happened, but it was the day in and day out honoring of each other I always wanted to emulate.
Their love overflows; you couldn’t help not being happy at their house or around them. It was who they were, not something they did. They also always had time for everyone who was in front of them. Whether I was an annoying 5-year-old or my 40-year-old self now, they drop what they are doing and make you feel like you’re the only thing that matters. They do this for my boys, my husband, and frankly they would do it for the grocery store clerk as well. Their character of integrity and love no matter what you have done is what bleeds out of both of them.

My Grandparents’ love has taught me the view on top of the mountain is worth the climb. It’s worth the hard days and the tiring days because the view on the top of the mountain at 75 years of marriage is worth every single step in front of the other climbing to get there. Is it easy? Absolutely not. But is it worth it? Absolutely! And my Grandparents would say so every single time!”

This story was submitted to Love What Matters  by Chelsea Dyck of Minnesota. You can follow her journey on Instagram. Submit your own story  here, and be sure to subscribe to our free email newsletter for our best stories, and  YouTube  for our best videos.

‘Would you like to hold your son?’: Mom shares emotional adoption journey, amazing act of kindness for birth moms

Married For Half A Century: An Interview About Everlasting Love With Jane And Bob

‘Take photos with your grandparents, because one day, when the dust has settled and the years have gone by, those photos may be all you have left of them.’: Woman pens ode to grandparents