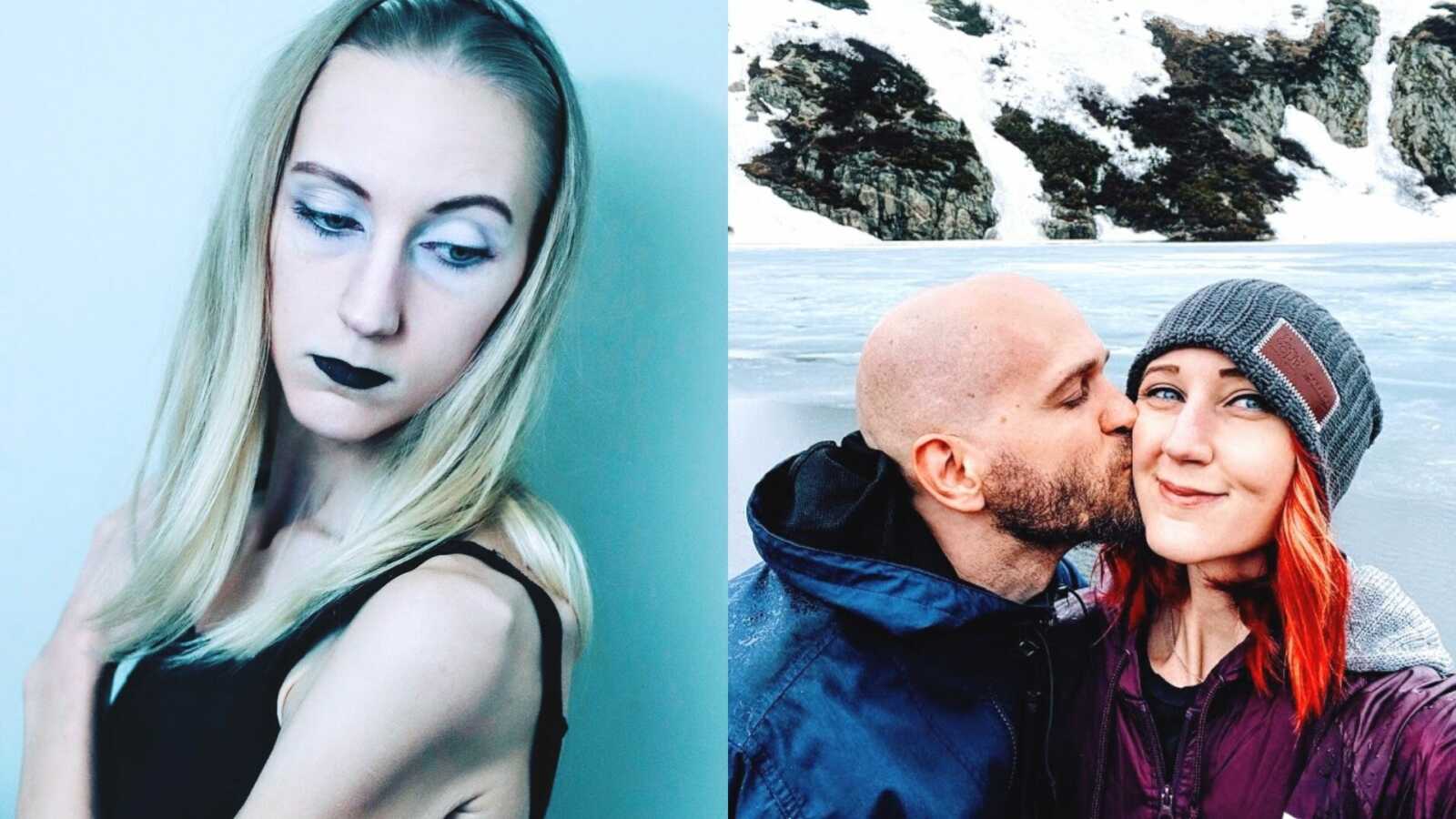 Disclaimer: This story includes details of eating disorders that might be triggering for some.

“It was a truck stop bathroom in the middle of the night where I began to measure out the shape of rock bottom.

I’d run a lot of miles that day and eaten very little. I’d also gone to work, and on top of that, I’d driven several hours with more to go. Even the little I’d eaten felt like it had lit my brain on fire, torturous with self-loathing.

I was kneeling on gritty truck stop tiles, throwing up. Purging was not common for me, but that night it felt necessary—I just wanted to hurt. Through the dizzy haze, I noticed fresh blood spattering the floor. It took sluggish seconds until the realization hit that it was mine. Blood was dripping out of my nose and the corners of my mouth.

I wiped my face on the way out of the bathroom. I bought a cheap cup of gas station coffee and climbed in my car. I did quick math born of long practice in my head, measuring the distance left to drive against the time it took laxatives to kick in. I pulled out pills, swallowed them down with acrid black coffee.

In the dark hours of that drive, I felt pinned between a longheld core belief and a sinking realization: I believed I deserved every moment of the misery I was living. I realized that if I stayed in that misery, I would die.

The path to that point had been long and torturous. My eating disorder first presented itself when I was a teenager, showing up alongside the self-harm and suicidal ideation that promised to rescue me from a life that felt unbearable. I chose to fight, and I wrestled my way into recovery in my early 20s. I spent nearly 7 years with my eating disorder in remission, held at bay by countless routines I’d built to care for myself.

But crisis shook those safeguards into sand. A litany of loss slammed into my defenses like a hurricane. Some of that pain was fairly public (a lost job, the onset of chronic illness, a lost home, being forced into a strange new city, raging untreated PTSD). The worst wounds were those happening behind closed doors—old and new trauma, the ongoing loss of my autonomy, my safety, and my sense of worth at the hands of someone I loved. It was so much easier to blame myself than to face the truth of how deeply people we love can harm us.

The ugly fine print no one ever gives you about anorexia is that you can’t selectively restrict. When you restrict your food intake and try to shrink your body, everything else gets restricted also.

As I got sicker and smaller, my life got smaller too. I became too physically weak, too mentally sluggish to do the work as a rock and roll writer that I loved. I became intensely isolated, losing all healthy connections. I couldn’t drink my beloved oat milk lattes or practice my love for baking. I was barred from running, then from even walking.

All that was left was the perpetual feeling of bitter cold and numbers—always numbers. Calories, miles, measurements, weight. My existence had once been full color. It became a series of numerals stamped over the backdrop of a soundless, lightless void.

There were exactly three reasons why, despite my absolute terror, I finally decided to follow my medical team’s urging and admit to treatment for anorexia: my husband, a small group of friends, and an exceptional therapist. Each of them became fierce allies with the purpose of my healing long before I could commit to that cause myself. I was ready to die. They were ready to help me travel halfway across the country to get the level of care that I needed.

Surrendering my autonomy entirely to the staff of the treatment center was intensely humbling, the ultimate narrowing of a life I’d already shaved down to nearly nothing. The world of locked doors and every bodily function closely monitored felt torturous to my fiercely independent spirit. On my birthday, my body screaming with pain from the refeeding process, I sobbed on a plastic mattress while I watched a scene from my favorite movie (Lord of the Rings) on repeat: ‘You shall live to see these days renewed—no more despair.’

The first round of treatment gave me a chance at life. It also gave me some of the most revolutionary friendships of my life, a wild, slow-dawning hope that relationships could be something more than the sum of what others wanted to take from me.

But I discharged with the same core belief, trembling deep and uneasy in my ribcage: my existence was wrong. I deserved to be punished. And now, after taking so much time consuming medical and therapeutic resources, I felt like I had to pay the debt. I returned home to subject myself to the same harmful behaviors (from both myself and from others) that I had left behind.

‘You don’t have to punish yourself anymore,’ my mother-in-law told me.

We were standing in my kitchen. I was already so sick again, so deep in the same wretched cycle I believed I deserved.

‘Did you know that? You don’t have to punish yourself,’ she repeated, more earnestly.

I couldn’t find anything to say.

When I was admitted to treatment again, I had been stripped away to a simple, desperate resolve: the only way to get well is to remove every caveat, every condition. It could no longer be ‘I will recover so long as I don’t have to change any relationships.’ It would not happen in a place of ‘I will only heal if I don’t ever have to lose anything again.’ It became a no-holds-barred, no-conditions kind of reckless surrender. I was going to live—no matter the cost.

One night early in my stay, my acid reflux was so painful I couldn’t breathe. When I got up to ask the nurse on shift for an antacid, it felt like my chest caved in. I collapsed, submerged in black static. I caught only glimpses of sight and sound, dim flashes of lightning through the haze. I could hear the soft, steady voice of the nurse talking to me, coaching me towards consciousness, overriding the beep of the machines she was using to monitor my vitals.

I came back to myself with a soul-shaking epiphany that finally moved from my intellect into my soul: I was allowed to be cared for. I’ve always believed that love is the truest thing there is, and love has never measured reality in the metrics of deserving. Somehow, the truth about me was not the worst I’d been told. Somehow, the truth about me looked like a gentle presence sitting with me in the dark while my unsteady heart learned to beat again.

In the months that followed, I learned to use my voice to tell the truth instead of my body. Supported by caring therapists, I took a clear-headed inventory of my life, saying goodbye to and grieving anything that had fed the relational patterns, corrosive punishment, and shame. I began to rebuild myself, one costly step at a time, walking a road that led me through discharge and back into a life I am still slowly making new.

Some days, it still feels like believing in my wrongness would be safer than believing in the relentless hope that love spoke over me in the dark. But I know the truth. I’ve measured the dead-end dimensions of rock bottom. I know every inch of the oblivion my anorexia leads to. I’m ready to open the door to something I don’t yet fully know—to the great and glorious plot twist of grace.”

‘My weight fell to that of an 8-year-old. I thought I was FAT.’: Woman battles anorexia, binge eating disorder, ‘Recovery has helped me discover myself’

‘I looked in the mirror. ‘There’s no way I have anorexia. I’m not thin enough.’: Woman recovers from eating disorders, ‘I finally feel at home in my body

‘I remember that scared 13-year-old sitting in a hospital refusing to eat. I think she’d be proud.’: Anorexia survivor donates breast milk

‘When my dad whispered, ‘I love you,’ I knew it was more than that. It was a final goodbye. They were ready to let go.’: Woman diagnosed with eating disorder at 13 finally accepts help, ‘I am ready to start the next, better, decade of my life’