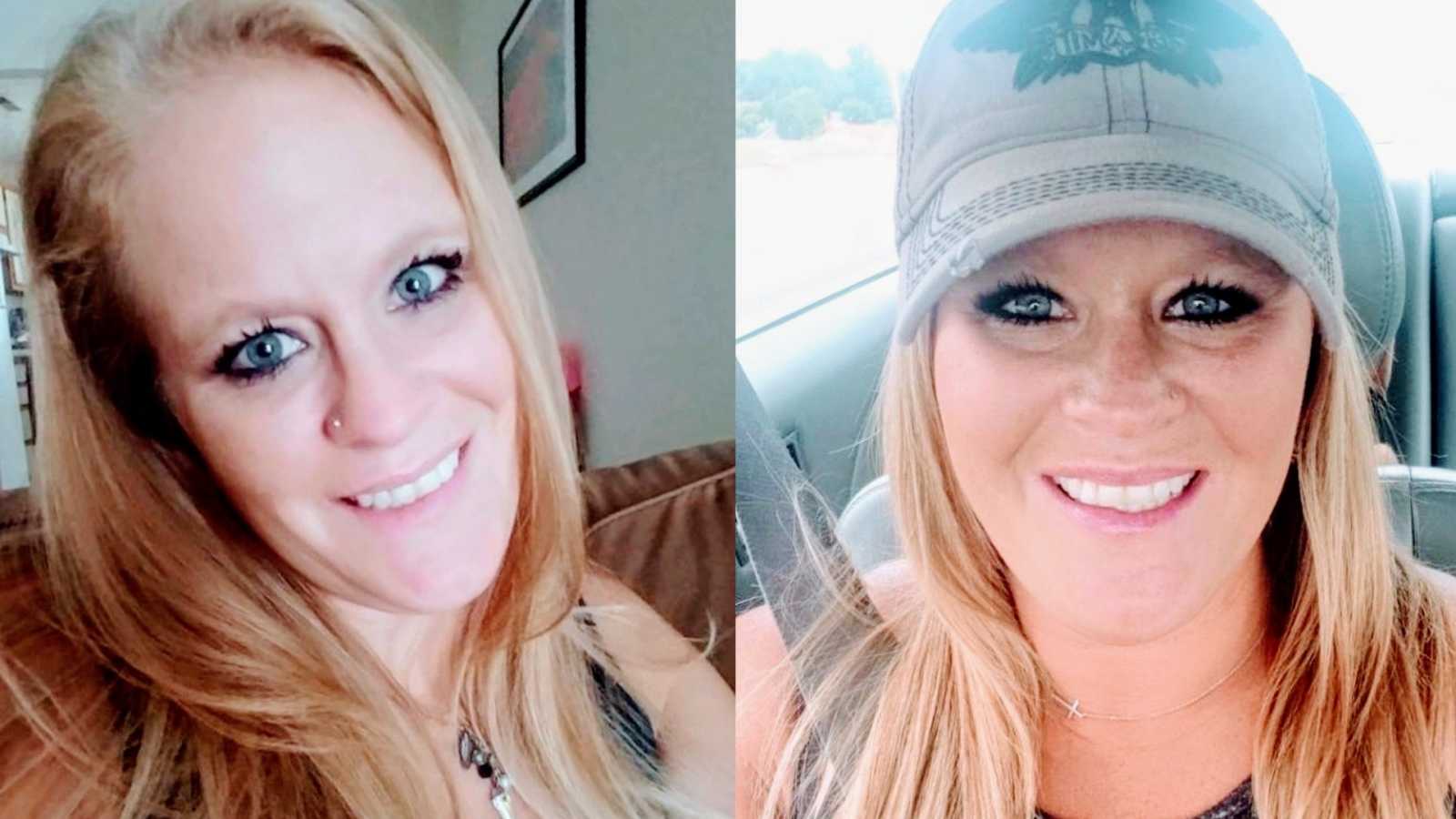 “On September 6th, 2018, my mom called me and knew something was wrong. She was at work and couldn’t come over, so she sent my dad. My dad found me, and I was covered in bruises, rug burns and cuts head to toe.

Just 18 hours prior, I was released from the emergency room where I was given a Percocet and a prescription for three more. My dad was driving me home from the ER and getting my script filled but I knew I would be getting my kids back the next day and couldn’t function on Percocet. So, I called my doctor and asked for something ‘less strong.’ We got both prescriptions filled and my dad dropped me off, home alone with three Percocet, one in my system and 15 Norco 7.5mg. When my dad found me and called 911, he immediately searched for those pills. He found both bottles and both were empty. I have no recollection of taking any pills. (They found all kinds of pills in my system).

I was taken by ambulance and don’t remember really anything. I have a flashback of a female officer in a black uniform knelt down beside me with a low bun, dark hair and no make-up. I can still see her face clearly to this day, but don’t remember anything else. I was admitted into ICU and given a 25% chance to wake up. I remember waking up to my best friend Ravan standing over me looking at me as if I were dead. I said, ‘Why are you looking at me like I died. Where am I?’ The next 4 days in ICU is a blur at best. The first 12 hours I was in and out of sleep. They had an IV in my right hand and it was extremely swollen. I kept telling the nurses that something was wrong but of course I couldn’t feel anything. They kept saying the swelling was from my IV. Finally, after 12 hours a doctor came in and ordered them to remove the IV and get X-ray in there immediately. It was then discovered my hand, my right hand, was broken in half. I needed major surgery. I had just eaten so exactly 8 hours later I had surgery to repair the break and install a titanium plate, a bunch of screws and 10-12 stitches. It was also discovered I had a broken tailbone. I was blessed to be alive.

The days I spent in ICU was a blur but also a wakeup call. I had been in denial and justified my use because they were MY prescriptions. I wasn’t getting prescriptions off the streets, I wasn’t doing illegal drugs, I wasn’t even drinking alcohol on them. They were my prescriptions from MY doctor and one pharmacy, so I couldn’t possibly have a problem?!? Right? WRONG!

They had become a problem and I was abusing them. I had hit the max dose on Adderall along with many other drugs, around 20 to be exact, and they had stopped working. So, I thought I’ll just add an extra half or whole and of course that worked for a while and one extra turned into two extra turned into three extras. Before I knew it, I was running out of my Adderall early and would then abuse my other meds to ‘get through the days.’

It was a VICIOUS CYCLE of up down up down up down till I was down more than up and just wanted to die. Most days I was throwing back 40+ pills at a time and praying I would go to sleep and never wake up. I wasn’t ‘trying’ to commit suicide but prayed I wouldn’t wake up, so in reality, it’s the same thing. I was hopeless, felt worthless, struggling financially, hated myself, hated my life, felt I had no purpose and just wanted to die. Most days I didn’t eat or drink anything except enough water to swallow handfuls of pills. I had even mastered swallowing pills without a sip of drink. I was irritable, angry, helpless, depressed, anxious, mean, and not taking care of myself or my kids. I wore a mask every day and pretended to be ok, put a smile on my face and pretended to be someone else. I made it to work most days but used all of my health issues as a crutch and was constantly out on intermittent FMLA. Little did I realize I caused a lot of those health issues by abusing my pills. I have severe peptic ulcer disease and was hospitalized five days because they were so bad. I couldn’t eat or drink for a year except saltines and a little water. I vomited constantly day and night and was in fetal position screaming because the pain was unbearable. I was in and out of the ER over twenty times just for that and getting more and more narcotics from the hospital, my GI doctor and family doctor! I lost 50 lbs during my last year of addiction.

When I woke up in ICU, I knew the Lord gave me a second chance at life. I knew I had a problem and knew I needed help to get off all those prescriptions. I had been on Adderall close to 15 years. Upon being released from ICU, I checked myself into a facility locally and detoxed. They were going to release me after four days, but I knew I needed to get away. By the grace of God, I was introduced to a man that worked for American Addiction Centers and over the next several hours things started moving and just 15 hours later I was on a plane from VA to FL to a rehab for 30 days. That’s where my relationship with the Lord started to change everything and working the program, attending groups, individual counseling, group counseling, NA, AA, Celebrate Recovery, church and hearing testimonies began to change my life. I was also brought off my high horse and humbled because at first I looked around at other addicts and thought, ‘I’m not like them, I don’t do illegal drugs, I’m in the wrong facility, I don’t belong here, you want me to sleep on that box you call a bed?!?’ These were all things running through my head, but I was quickly brought down to reality and humbled to realize we are all the same, maybe a different story, but none of us are better or worse than the other, we all had an addiction to something.

After rehab I came home to a local group setting once a week while I waited for IOP to open up. Then I started FAITHFULLY attending Celebrate Recovery here in my hometown. The first time I pulled into the parking lot, I never went in the building. A week later I worked up the nerve to walk through those double doors and thank God I did. I work the CR program, I show up weekly, I worked the steps with a step study small group, and I serve at CR as a way of giving back. I have a church family and serve there as well.

And here I am one year later. THANK YOU JESUS I am clean, happy, full of hope, can’t imagine wanting to die ever again. I am free from that double life, free from bondage, I’m at peace and I’m a loving and present mama to my three beautiful babies. I am also helping others who are struggling, providing hope to the hopeless and speaking up about addiction. I won’t stop trying to break the stigma and save lives. My parents got their daughter back, my siblings got their sister back, my work got the real me back, my kids got their mama back and most importantly I got me back who I love and am proud of. I am me, unapologetically. I am clean, I am free. Happy one year to me and many more to come… YOU CAN DO IT, TOO.”

This story was submitted to Love What Matters by Lindsay Pace, 37, of Christiansburg, Virginia. Follow her journey on Instagram here.  Submit your own story here, and be sure to subscribe to our free email newsletter for our best stories.

‘You have to choose right now. Me or him.’ That was the last time I saw my brother alive.’: Woman battles 10-year addiction after brother’s death, starts ‘new chapter’ after near-death experience

‘I woke up in jail, my hands and ankles handcuffed because I’d refused the breathalyzer test. My kids had been in the backseat.’: Woman beats addiction after several years of drug and alcohol abuse