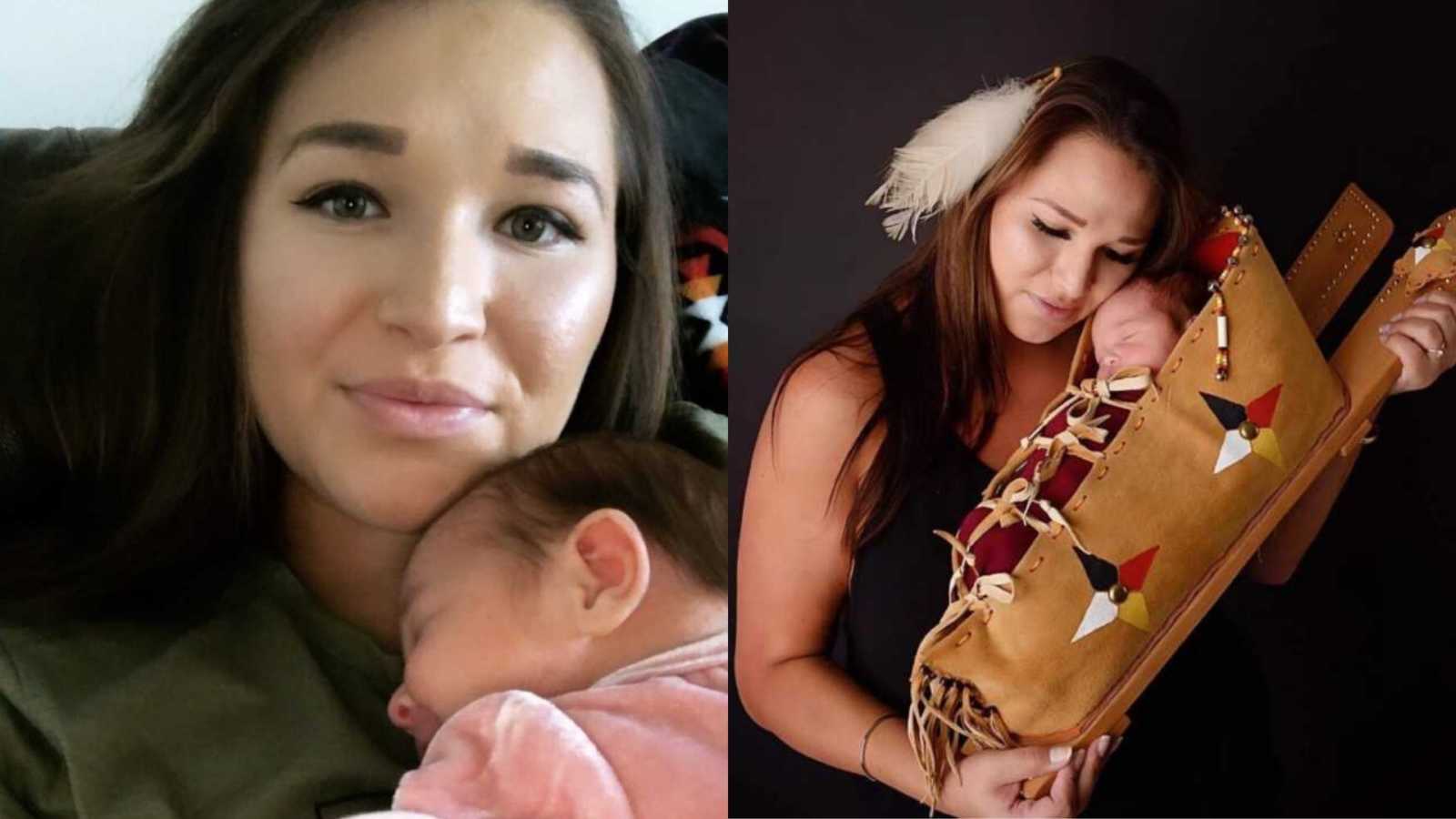 “In becoming a new mother in recent months, I have learned more from my own daughter versus any other guide in my life. Her arrival earthside has changed the very existence of who I am. My whole life I dreamed of becoming a mother, spending hours in my room mothering my dolls and bears. I knew I was meant for this. In finding out I was unexpectedly pregnant, I cried tears of happiness.

As an Oglala Lakota Indigenous women, creating a family is one of life’s precious goals. My whole pregnancy I beamed of pride and joy, I felt like I glowed the whole nine months. I even made the decision to not know the gender of my baby because I wanted to be revealed in the most natural form, her arrival. Becoming a mother is something I know now, no amount of preparation could have made this transition easy. I feel like all my energy was sucked out of me by a small human who weighs less than a gallon of milk. I had to cater to her ‪24/7‬, in breastfeeding her, soothing her, changing her, bathing her. It was the most overwhelming thing I never thought imaginable. The worst part is, in my naive mind, I would obtain motherhood and return to my normal activities in only 10 days after her birth. That was the thought that would be my outcome as a young energetic woman.

Initially, her arrival earthside spun me into a fear I had never known. One moment I was getting an education, the next, I could barely will myself to step out of my front door. I was terrified of motherhood. I did not feel properly prepared to raise her the way I dreamed. Feeling isolated, alone, and an exhaustion I had never experienced, I was still learning. I felt crippled by my own fears, I wanted to be a supermom but I kept feeling this unwavering fear and resentment. I was resentful for having to drop my Fall 2019 courses and not having my own mother around. I thought I could give birth to my first child and return to school only 10 days later.

That was just the beginning. It was mid-November, and I felt like had just arrived in the door from the hospital with a newborn. I was induced into a painful labor that resulted in the birth of my daughter on September 23, 2019. I gave birth to a beautiful baby girl. Her name is Winona, meaning firstborn daughter in the traditional Lakota language. Her first breath earthside was the start of a whole new life for her and for me. Creator blessed me with what I had been waiting for my whole life. Her arrival spun me into a euphoria I never thought imaginable. And just like the sunset, that euphoria began to fade. The fear, the raw reality, I am now a mother.

As an only child and was raised by a single father, my world had no limits. It was just us, I was raised to be an independent woman who could come and go wherever my mind wanted. I was limitless. My fiancé barely tamed me, knowing if I truly set my mind to it, it would happen. Arriving home, the fear and overwhelming anxiety would set in almost immediately. The mundane cycle of robotic caring for my newborn was chipping away at my Gypsy soul. I felt trapped and terrified. I could no longer come and go as I please. I could no longer leave with just a wallet and phone, I was carrying around a little life and all its contents. I had been terrified of talking to anyone, especially the university staff and medical professionals. It felt like the weight of the world was on my shoulders and because I’m a mother, and I’m not allowed to complain. I had this pressure that I’m only allowed to tell the world how amazing it is to be a mother. It felt like I could only boast of her blessing and be thankful to even been lucky enough to get pregnant. Yet there I was, shackled to this infant while my fiancé was able to escape to his 9 to 5 job. This infant that I love more than life itself. How could my mind betray me so much? My mind went through this roller coaster of happiness and pain. Postpartum had become this reality I never thought I would ever have. My whole life I’ve been this happy bubble, living to see others smile. I want to be resilient, to be a beacon of hope to other women. Yet, most days I could barely will myself get out past my mailbox.

The frustration of giving up one of my favorite things, my precious education, felt impossible. It was my six-week check that I had counted down the days to aim to continue a normal life. Another thing that has shaped my life was my physical activity, CrossFit. I had done CrossFit for years and while I was pregnant, up until about 33 weeks. I had craved for weeks after she was born to get back to one of my favorite daily hobbies. Yet there I was, sitting on my couch holding a newborn, feeling the ache and pain from neck to my toes. Living on a third-floor walk-up apartment was a daily challenge itself. I was certain I’d never be able to do CrossFit for months because I was chained to this baby. Yet parts of my mind were motivated to work so hard so she could feel my gusto and resilience. Then, the fear crept back and I was scared to leave. I was ashamed of feeling so helpless, so uneducated, so unprepared. I was resentful my mother wasn’t a part of my life, and that she wasn’t there to guide me through. I felt uncomprehendingly alone. My nipples bled, my breasts were engorged and I wanted to give up.

Then one day I realized something: I had been born in the unlikely circumstances myself. My father raised me as a single father and was able to take me off the reservation. It was his admirable gusto that gave me a world many young people on reservations only aim to have. If my father could make it off the reservation and get me where I am today, I could find the strength and tools to do the same for my own daughter.

It all started with baby steps. I knew my body craved the physical activity, so at the 7-weeks old, I put my daughter in her car seat, put on my gym clothes, and somehow walked out the door with the goal of going to a CrossFit class. I had decided in my mind, the worst-case scenario is that I would leave in the middle of class because she wouldn’t have it. Guess what? She slept the whole hour-long class. I worked out right in front of her and she didn’t make a single peep. I had somehow conquered one of my biggest fears. Now she’s almost three months and I go to CrossFit on average of four days a week. I set her next to me and am more motivated than I have ever been in my whole life. Now she opens her little eyes and watches me as I toss weights around. Baby steps. I have never felt more confident in my whole entire life. Women truly rule the world. We carry children, we birth children, we raise children, we ARE limitless.

I am so blessed to have so many incredible women in my life. My boss, my friend, and greatest inspiration reminded me it’s truly mind-over-matter and well, some goofy hormones too. I look at her small little fingers now and aim to give her the most beautiful life. I want her to walk to the red road just as her ancestors did. Winona’s breath is proof of indigenous resilience.

I will not live a mundane life. I owe my ancestors the will and determination to give her all the ancestral knowledge. I will keep fighting and working to get my Masters and maybe even a Ph.D. in Native American Studies one day. I want to not only learn for myself but for my daughter and my ancestors. Every semester I finish learning more than I could have ever imagined. That knowledge alone feels like power. I will make my daughter and my nation proud with my education. I will be there for her when she births her first child. I can only pray she never feels as alone as I did. I hope young mothers out there experiencing the same struggle know it doesn’t last forever and know IT’S OKAY TO ASK FOR HELP. It’s okay to feel weak and helpless. It truly takes a village to raise a child, and that’s the beauty of motherhood. There is a community of mothers I’ve met and some I’ve never even met, that have shown me a kindness that lights a fire of passion and awareness.”

This story was submitted to Love What Matters by Esther Tuttle from Montana. You can follow her journey on Instagram. Submit your own story here and be sure to subscribe to our free email newsletter for our best stories.

‘What if I never love my child? I hate being a mom.’ The day she was born, I became a different person.’: New mother suffers severe postpartum depression, ‘I was on the brink of suicide’

‘Sitting inside my inbox was a beautiful present. ‘I know this is random, but my family just welcomed a baby girl.’: Adoptive mom thanks social media for ‘linking two families together’

“One random evening, I received a message on Facebook. She reached out on behalf of her son, who wasn’t ready to be a dad, but wanted the baby to have a loving home.”