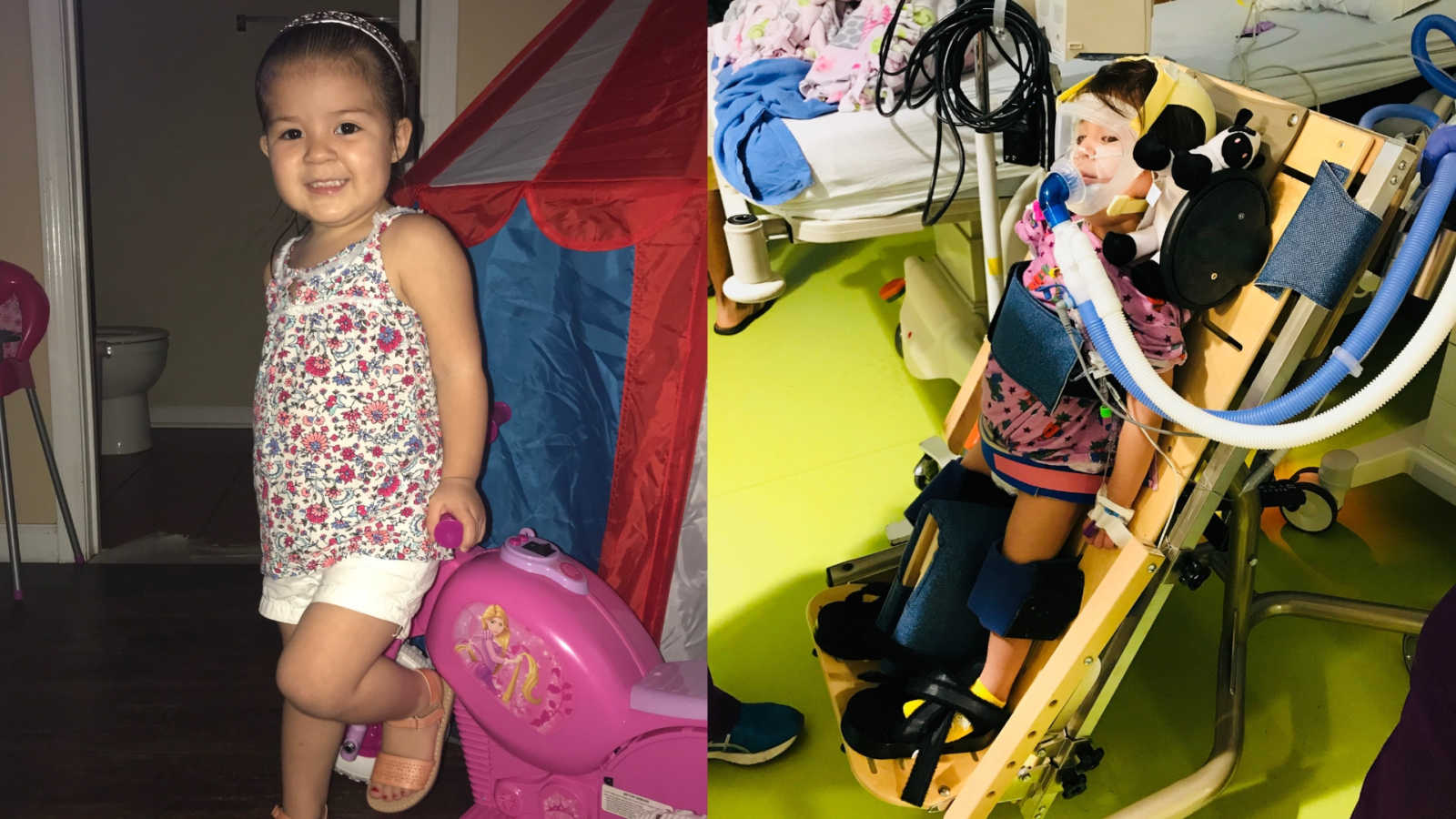 “As a parent you try to protect your children from the worst and sometimes that may not be possible, but when the worst does happen to you, you realize that having a clean house, perfect dinner, and lots of friends doesn’t matter as much anymore. In the early September of 2018, my four children came down with a regular common cold, they all took the same medications, same symptoms, same daily routine. While three of my children continued to improve, my youngest 2 year-old daughter, Abigail, became extremely worse.

During a three-week period, she saw her Pediatrician twice and was prescribed antibiotics. On her third week of being sick, during a regular round of medicine, I woke her up at 2 a.m. and realized that she couldn’t move her arm, I asked her to raise her arm up and then realized it was paralyzed. I ran in our bedroom and screamed at my husband to wake up and take her to the ER. Within 5 minutes, she was on her way to the ER closest to us.

Arriving at the hospital around 2:30 a.m., they immediately brought her to the back and completed blood work and an x-ray of her shoulder. An hour has pasted, and the first doctor came in and said her x-ray was normal and nothing came up in her bloodwork, so were going to get a second opinion and I’ll bring in the next doctor. As hours pasted, we saw three different doctors and kept getting the same answers. As the final doctor told us that they have determined that she has a pinched nerve and she needs to wear a sling and come back on that following Monday to see the Orthopedics.

When Abigail came home, we gave her a warm bath and put her to bed. A few hours have by and now 2 p.m. and her fever has increased, and her right shoulder is barely moving. I call her Pediatrician right away and was told that does not sound like a pinched nerve and go to another hospital right now. We are now headed to another hospital and within the our she is admitted into the hospital ICU. The doctors have completed every test from Spinal Taps, CT Scans, MRI’s, blood work and blood cultures. They started her on steroids and antibiotics in her IV and now the waiting game has started.

It has now been two days in the ICU at our second hospital and finally we have an answer. The doctors told us that they don’t know. How can a doctor not know? How can they do every test known to man kind and still not know? They said we don’t have the resources to do further testing and not qualified to help her, so we are sending her to the Children’s Hospital in Atlanta, Georgia.

The feeling of watching your daughter being carried away with no movement and transported by ambulance, was one of the worst experiences of my life. But little did we know, that this was just the beginning. Thinking on the drive to Atlanta, I never prayed any harder, cried any louder, and begging to take me instead and not my little girl. The feeling of hopelessness and not knowing the unknown is a feeling we can never explain in words.

Running into the hospital, we asked were she was and how do we get there, we were directed to admissions and completed paperwork, I kept thinking, ‘Why is this necessary right now? Why do I need to do this?’ I rushed everything, not reading any of the paperwork and ran to her room. As we came in, she was surrounded by nurses, being hooked up to machines and playing the waiting game again. I kept wondering when we were going to get answers and why do we not know what is wrong with her. As each doctor came in, I asked so many questions and couldn’t get an answer. Finally, the next day, we got our answer. The neurologist came and gave us what we needed, but the worst has yet to happen. He said she needs to get worse before we know exactly what were dealing with and do more testing.

As we played the waiting game again, we learned that she was diagnosed with Acute Flaccid Myelitis. We received this diagnosis after her left lung collapsed, became completely paralyzed and put on tubes in every possible way they could. She was in the ICU for three weeks with respiratory treatments every two hours, feeding tubes, two IVs, OT Therapy, PT therapy, Speech Therapy, Plasma Treatments every other day and still no movement. As we started the plasma treatments, we noticed that after the second treatment she was getting her movement back with reflexes. As each passing day went by with the same thing done every day, she was improving.

With improvement comes hope and that hope lead us to where we are today. When we received notice that she was medically stable enough to be transferred to inpatient rehab, we celebrated. We celebrated her being able to move both legs and her right arm, being able to eat and drink again, and most importantly breathe on her own again. She started her therapy treatment right away with the same schedule every day, thinking the walls were to close in on us as each day passed. We were wrong. We continued to fight each day as if it was our last with her. As each week passed, she learned how to sit up, stand and walk again with help, and became our little girl again.

After two months in the hospital we finally were able to go home. I remember seeing the look on her face with excitement and how happy she was when she hasn’t been for so long. I felt how lucky we were, and how it could have been worse. We could have left with no child at all. On the way home, she ate her Happy Meal and kept saying, ‘HOME HOME HOME’, and as we became closer, she realized that it was true. We pulled up and were immediately surrounded by family. She waved and had the biggest smile on her face.

With a good night’s rest and sleeping in her own bed, she had a big day. She started her therapies right away. She fought and cried because they thought she was going back, but she finally realized  it will be okay because that night, she took her first steps on her own. Screaming with so much excitement, we as a family learned this is what was most important.

We have been spreading the word on awareness for AFM for the past week, trying to get her story out and providing those parents with information. She has been so brave to put her story out there for everyone to see and judge, but that hasn’t stopped her. Our mission is to help those in need and give those children hope. Demanding answers from the CDC about the causes and fighting for what was taken from her. We will not give up on AFM Awareness, we will get the answers. It’s a horrible feeling when people ask, ‘How did she get this condition? Why do she have it?’ and I look at them with no answers, because after two months in the hospital and having every test completed, I still don’t have answers. That is my worse feeling – the not knowing. It’s not the experience, the tubes or treatments, it’s not knowing what caused this. Was it something I did, gave her, was she bit by an ant, or simply just an everyday cause that children do every day? It’s just the unknown, just as much as her future is.”

This story was submitted to Love What Matters by Erica Myhand Palacios, 28, Columbus, Georgia. Submit your own story here, and subscribe to our best stories in our free newsletter here.

‘Just turn the key,’ she said. I was flustered. ‘I don’t know how!’ I forgot how to tie shoes. I struggled seeing a future.’: College student with Acute Flaccid Myelitis now thriving, ‘I’m unlocking my independence’

‘I got a bad cold. Within 24 hours, I was fully paralyzed. Parents pulled their kids away like I was contagious.’: 12-year-old girl with Acute Flaccid Myelitis finds joy despite paralysis, ‘I love life and the people in it!’