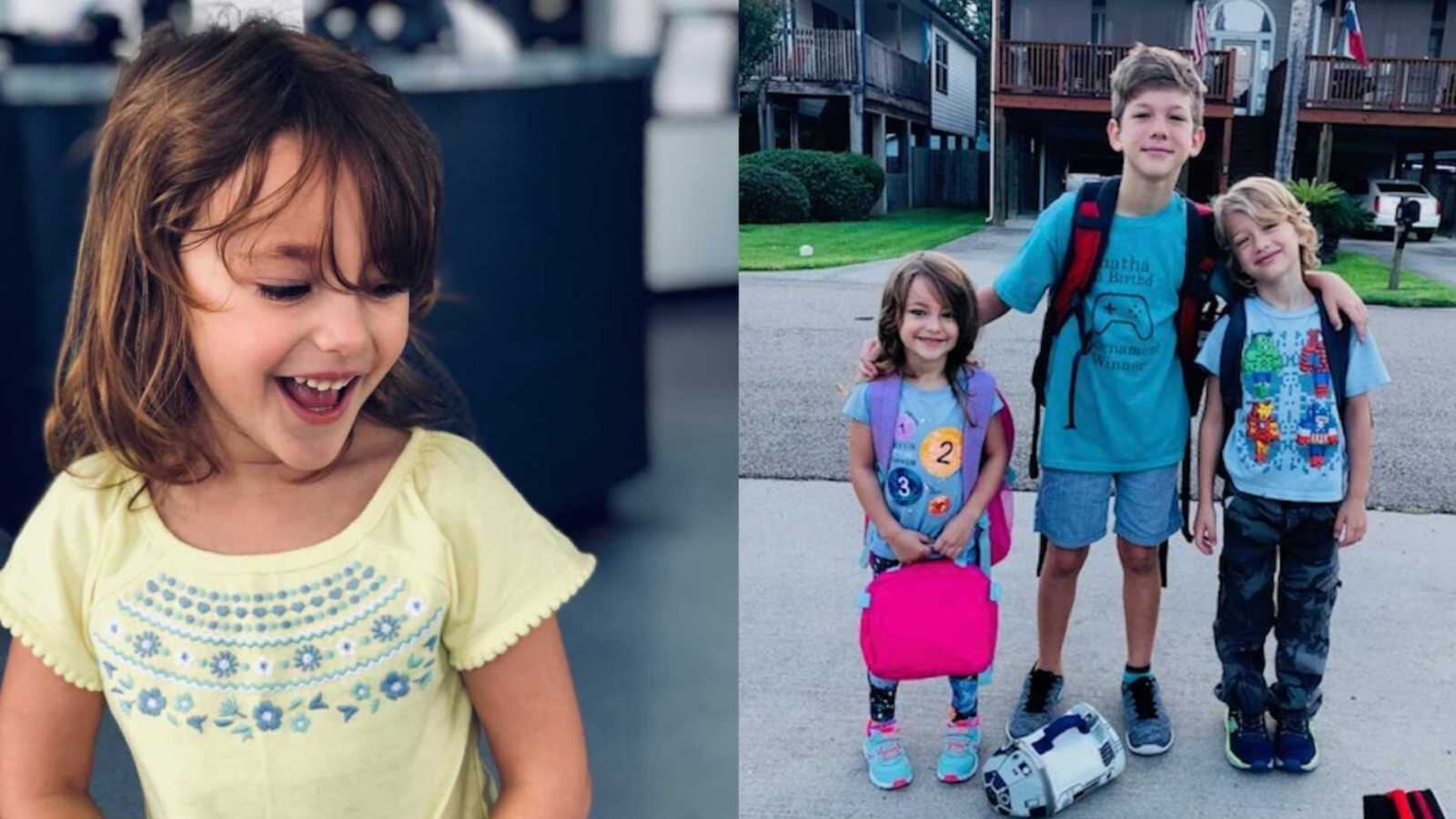 “When I was 36 weeks pregnant with my daughter, an ultrasound revealed she had stopped growing at around 33 weeks’ gestation and I was immediately taken to the hospital to be induced. She came into the world weighing 4lbs 12oz and after an 18-day NICU stay, we carefully strapped our tiny girl into a car seat and brought her home.

5 years later, Eisley (or, Little Bird, as we all like to call her) is a healthy, athletic child… but still extremely petite. She wears a size 3T in most tops and dresses, 2T in shorts and pants. Truthfully, she still fits in some clothing that’s sized 18-24 months and is constantly trying to convince me to let her squeeze into some 12-month sized dresses, so she can wear them as shirts.

The girl eats well… she’s just little. So little, that I kept her in a rear facing car seat until she started kindergarten due to her weight and height. So little, that when she broke her leg early in the summer this year, there were no crutches or knee scooters small enough for her. SO little that I worry about her riding the bus to school. SO LITTLE that when I brought her to the first day of her pre-team, invitation only, gymnastics class, the coach looked at me like I had lost my mind and asked to see proof of her age.

All that said, the core of this article has almost nothing to do with my daughter’s size. I only mention it because I need anyone reading to react with the appropriate amount of horror when absorbing the following sentence:

Last week, a boy at school punched my daughter in the face.

And yes, I have pictures. But no, I’m not going to share them because I guess I’m just not that mother. I’m not interested in shaming anyone or parading my 5-year old’s black eye all over the Internet.

Let’s just say that this child hit her hard enough that her eye was swollen by the time she got home. Hard enough that it was bruised and puffy the next day. Hard enough that I originally wanted to cover her black eye with makeup before sending her to school again but refrained because the LAST thing I want to teach her is that she should hide it when someone hurts her.

Unfortunately, it seems as though I may have been too late on that lesson.

The worst part of this for me is not that the boy punched her… and I’ll spare you my maybe sanctimonious comments on how I feel about that part of it because this child is 5 years old and I have no idea who his parents are or what his home life is like. My judgement about that part of the situation isn’t getting anyone anywhere.

No, the worst part of the whole thing is that this boy punched my tiny daughter in the face and she wouldn’t tell me what happened.

First, she said she couldn’t remember how she had gotten hurt. Then, she claimed she fell on the playground. But as the day went on and her eye swelled up exactly as one does when it gets punched, I knew I wasn’t getting the full story… and she refused to give it to me. Instead, she got upset, clingy and sullen. She cried on the couch by herself, stopped talking about anything at all, wouldn’t play with her brothers or sing songs to her baby sister or act like herself in ANY capacity.

At dinner that night, my father noticed her eye immediately and asked her what happened. Thankfully, she told him the truth. But it scared me when she said that she didn’t cry when it happened because she was ‘trying to be tough.’

It scared me even further when she said that she hadn’t told anyone about it because she was ‘trying to be nice.’

What. On. EARTH are we teaching our girls?

I walked out on this child’s father when she was still a baby ENTIRELY because I refused to let her grow up in an environment where abuse was something women should hide and accept so how the hell did, I still manage to teach her this?  Where does this come from?

These questions are not rhetorical. I want answers. I don’t care if she’s 5. My boys would never have reacted to this situation the way she did, regardless of their age. Somewhere, somehow, my little girl learned that she needs to be ‘nice’ at the expense of herself and I’m not having it.

Which is basically what I told her teacher when we sat down the following morning at 7:30 a.m. and had a conference about it. Maybe it surprised her that I wasn’t there to demand that this little boy be punished or removed from my daughter’s presence or anything of that nature. Not that I don’t think he should be disciplined… I hope he is. But he’s not my child and my primary concern was making sure this teacher planned to help me teach my daughter to have a VOICE.  I wanted to know that she would encourage her not to protect people that hurt her or ones that hurt anyone else, for that matter.

My daughter and I are both lucky that her school took this event extremely seriously. But I read stories every day about schools that don’t do so well in these kinds of situations. They brush things under the rug saying that kids torment each other sometimes, little boys are rough, children get rowdy now and then, kids are sometimes mean to one another, that’s just how it goes.

We can do better than this for our girls. We can do better for our children in general. Let’s stop teaching our girls that being nice is so important that it keeps them from standing up for themselves.

This story was submitted to Love What Matters by Briean Vandeventer, 34, of Kemah, TX. Submit your own story here, and subscribe to our best stories in our free newsletter here.