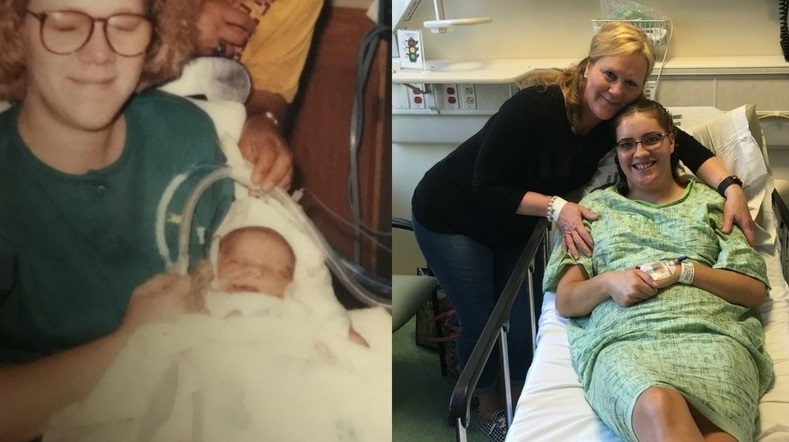 “I was born on May 11th, 1995. My mom had a normal pregnancy with me, like she did with my two older brothers. Nothing was out of the ordinary. But a few hours after I was born, my pediatrician noticed something wasn’t right. I was blue in color and had low blood oxygen. He examined me again and ran several tests. He knew right then I had a heart defect.

Growing up I always knew I was different from other kids my age. I remember always being asked why I had a scar on my chest, and I would tell them that I have a heart defect. I was always looked at differently.

After they discovered my CHD (congenital heart defect), I was med flighted to Johnson City, Tennessee, where my Pediatric Cardiologist examined me and diagnosed me with Pulmonary Atresia with Intact Ventricular Septum. In PA-IVS, no pulmonary valve exists. Blood can’t flow from the right ventricle into the pulmonary artery and on to the lungs. The cause is unknown for PA-IVS. Low-oxygen (bluish) blood mixes with the oxygen-rich (red) blood in the left atrium, and the left ventricle pumps this mixture of oxygen-poor blood into the aorta and out to the body. The infant appears blue (cyanotic) because there’s less oxygen in the blood. I was then med flighted to Duke University Medical Center where I had three open heart surgeries. I was just five days old for my first surgery. The first surgery was to increase pulmonary blood flow for heart defects like pulmonary atresia, which are common causes of blue baby syndrome. This procedure is temporarily used to direct blood flow to the lungs and relieve cyanosis while the infant is waiting for corrective or definitive surgery.

I was 10 months old when I had my second open heart surgery. The second surgery involved rerouting circulation so the superior vena cava (SVC) drains into the right pulmonary artery. This results in deoxygenated blood returning from the head and upper body, directly routed to the pulmonary arteries for oxygenation by the lungs.

I was almost 3 years old for my third open heart surgery. The third surgery was a procedure to close the hole between the heart and the tunnel that takes oxygen-poor blood from the body to the lungs. I followed up with my Pediatric Cardiologist regularly and would need heart catheterizations from time to time, but was doing pretty well.

During my childhood, I wasn’t allowed to do sports or much in gym class because of my heart defect. It didn’t really bother me. I was in a marching band all through high school, but I did get tired easily. My family would tell me my scar does make me different, but that I also wouldn’t be here without intervention.

I was referred to Vanderbilt in 2015 to start seeing an adult cardiologist. I remember my cardiologist at Vanderbilt explain to me how rare and complex my heart defect is and that I was a walking miracle. Last August I had to have another heart catheterization where they discovered I needed another open heart surgery. When I found out, I cried so much. I was really scared. I don’t remember my three surgeries from my early childhood, I just remember undergoing many heart catheterizations and that wasn’t too scary.

When my surgeon explained how he would have to proceed with my surgery, I was worried even more. I asked my mom questions about it all the time and she tried to comfort me and answer all my questions the best she could, knowing how terrified I was.

The morning of my surgery, I prayed to God he would ease my mind and just help me get through this like he had before. While sitting in the waiting room, reality hit me hard. I was about to undergo yet another major open-heart surgery.

My fourth open heart surgery was 16 hours long! They had to do a lot of work. I had to have a pacemaker placed but other than that, surgery went better than expected. Most people with pacemakers are adults, and are much older than I am. Me being 23 years old with one is something you don’t see often. I am adjusting well and getting used to having a pacemaker, but life is good. I always had the perspective of just wanting to be happy in my life and live one day at a time, and now I feel that way more than ever. Life is short. Make the best out of it.

I couldn’t have done it without my mom, my nana and my nurse Kerri. I’m so thankful for my doctors and nurses at Vanderbilt because they have made my journey with CHD a little bit easier. I embrace my scar because it’s a part of who I am. It’s a reminder of everything I have been through. This is my story.

My hope for the future of CHD is more funding, for more research to find out why these heart defects happen and what can be done to prevent them from happening. For those who don’t know what CHD stands for, it means Congenital Heart Defects. CHD is very important to me and my family. Here are some facts about CHD:

On Facebook there is a page called the Brett Boyer Foundation. It’s about a little girl named Brett who is Luke Bryan’s niece. She lived an inspiring and beautiful 7 months of life with both Down Syndrome and a congenital heart defect. In her loving memory, they helped create The Brett Boyer Foundation to raise awareness, fund research and spread love to the amazing Down Syndrome and Congenital Heart warriors. The World of Broken Hearts is making great strides for CHD also. I strongly encourage donating to CHD research because without donations, we don’t get the research we need to find out why CHD’s happen. We need to find a cure for CHD.”

This story was submitted to Love What Matters by Kristen Harlow, 23, of Bristol, Virginia. Have you overcome a compelling health battle? We’d love to hear from you. Submit your story here, and subscribe to our best stories in our free newsletter here.

Please SHARE this article with your friends and family to raise awareness about congenital heart disease!