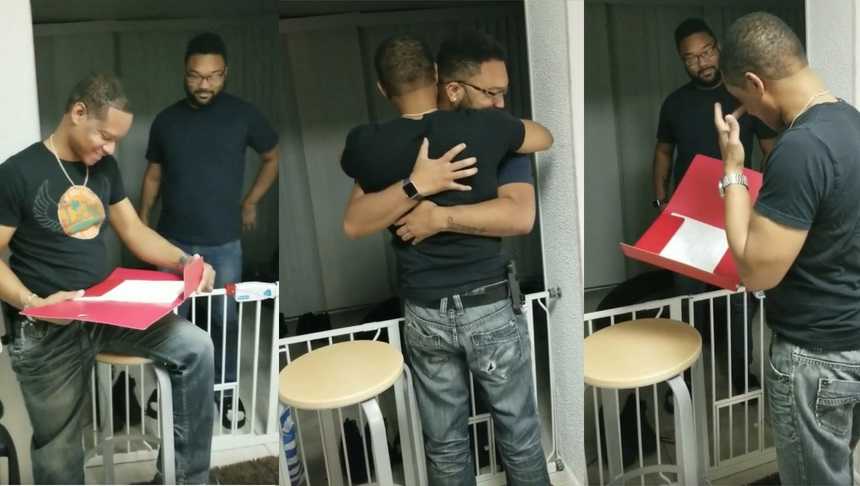 “My husband Jay Williams has been a part of my kids’ lives for 15 years. My oldest son Lance decided he wanted to ask his Dad (as he calls him) to adopt him, and officially take his stepfather’s last name. Lance kept asking me for his birth certificate, but I kept brushing him off saying, ‘Yes, I have it. Why?’ He kept asking and asking until I gave it to him, because he needed it to formally change his name to his stepfather’s last name. When the day got here, even I was unaware of what was going on. I was just as shocked as he was.

Jay has always been a great father to both of my kids. My ex-husband is still around but for his own selfish reasons, he has chosen not to be a part of Lance’s life. Jay was the one who stepped up to the plate and took over when his real dad chose to not to be instrumental in his life. He taught him how to drive a stick, how to tie a tie and helped him get ready for all his special occasion such as proms, and graduation. Without even being asked, Jay has always been here for Lance to give him all the advice he has needed to make sure he has grown to be the young man he is today. I couldn’t ask for a better husband, or a better dad for my kids.

My son Lance says, ‘A daddy is a man that brags about his kids. A father is a man that supports and gives. Thank you Dad for all your continued support.”

I met Jay 15 years ago at his job. Once we started dating, I sat Lance and my other son down and talked with them to let them know when we were ‘official.’ Ever since that day, Jay has not missed anything in Lance’s life, good and bad. He taught him how to drive a 5-speed stick on his new Jaguar. When it was time for formal dances and proms, his DAD was always there to get him ready and looking sharp.

Being a single mom after my divorce, I was unaware what the universe had in store for me when it came to trying to raise ‘boys to men.’ I was content with knowing I was going to do whatever I could to raise my sons with the tools I had by myself.

Once Jay and I became a couple, it was rough for us both, with him still trying to be a father to his kids that he was separated from, and me trying to make sure I made the transition with not just us, but for the kids, as smooth as possible. Despite what Jay was dealing with trying to tie up loose ends and dealing with an ugly divorce, he still was not hesitant about being there as the father figure my boys needed.

The bond these two have is so wonderful. They are both so spontaneous and will do anything together and do it without fear. Jay has been so instrumental in teaching Lance a lot of what he knows, from yard work, using tools, all his computer skills, how to be a good steward of his money (he has been on his own for the past 7 years) the stock market, and most importantly, how to be a responsible man. Every decision Lance has made, he hasn’t made it without the advice of his Dad. He will go to him before he comes to me for advice, especially when it comes to his career and his education. He makes sure he doesn’t make any decisions without his Dad’s input.

It was really hard for me to fathom how I was going to be a single mom of two boys, but Jay stepped in and filled the shoes where I fell short trying to raise a young boy to being a man. Without any hesitation, he is truly the best definition of what being a father is. He has always been a father to him when his own Dad didn’t step in and do what was required by a father to a son. My son has always talked about wanting to change his name and make it official so that he is his real father.”

This story was submitted to Love What Matters by Nicole Williams of Baltimore, Maryland. Submit your own story here, and subscribe to our best stories in our free newsletter here.