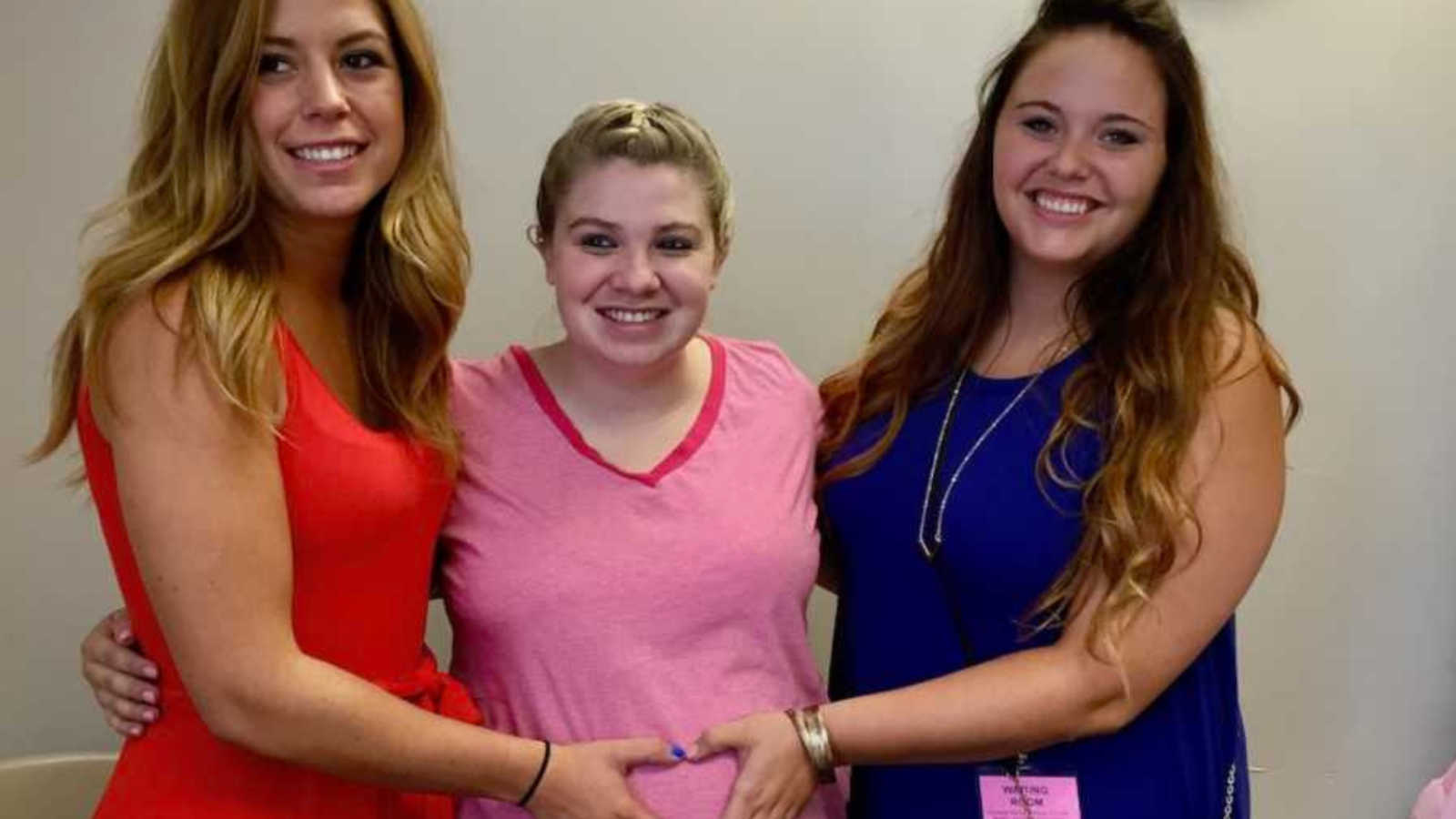 “Kenleigh Grace Evans was born 12 weeks early, at 28 weeks and 6 days and spent 60 days in the NICU at Miami Valley Hospital. This is going to be brutal and honest so hold on tight guys. I’m still suffering the after-effects. Sometimes I don’t know how I survived. I don’t think we ever get over the traumatic pregnancy/birth experience that brought us to that NICU. Your life never goes back to the way it was before the NICU. People don’t understand and will look at you and say, ‘get over it,’ but it’s not that easy. It forever changes the way you feel about everything. When you are faced with life and death situations every day, how can you not be changed?

I remember the first time my husband Mitch wheeled me to the NICU. We were supposed to go on a tour before Kenleigh was born because we knew she would have some type of NICU time, little did I know we would never get that tour. I didn’t know what to expect. He picked up the phone outside the door and they asked who we were there to see, he told them, and our daughter was referred to as a number, and trust me I still remember that number to this day. 72482.

There was incubator after incubator filled with babies too tiny to see with all the blankets and equipment. Seeing Kenleigh hooked up to machines and tubes and wires induced intense anxiety in me. My heart was so full, yet so broken. I could have never imagined how much love I would feel for her the moment she was born. The NICU changed me, deep down to my core.

The first time I got to hold Kenleigh I was scared to death. I was afraid I would hurt her, afraid I wouldn’t be able to hold it together. Holding her made me feel better, and when I held her, her heart rate stabilized and so did her oxygen. The doctors would let me love her all day if that was realistic.

The second night Kenleigh was in the NICU, she wasn’t responding well to the c-pap they had her on. Her alarms were going crazy and the teams of doctors and nurses and the respiratory therapist were all in there. Ordering us out of there to do what they could for her. I slowly walked down the hall watching all of this unfold in front of my eyes, I dropped to my knees and cried and begged and pleaded.

It’s true what they say ‘I believe the walls in the NICU have probably heard more prayers, more Hail Mary’s and more thank-yous to God than a church chapel has. Because when your child or newborn baby is sick, you’re willing to offer up anything and willing to pray to every God known to man (even if you aren’t really religious) if you think it might save your baby.’ That was me that night.

Kenleigh needed blood transfusions and had IV’s in her little baby head, and her and I share the same PICC line scar on our arms. I felt so guilty, why couldn’t my body handle being pregnant? Everything she’s going through is because of me. Was I selfish to want a baby when this is the result? Guilt if I missed a diaper change, guilt that I couldn’t be the person taking care of her every single night, guilt that her nursery wasn’t done, guilt when I had to leave her every single day, for 60 days. The first night I left, I swear people thought I was crazy. Mitch literally having to drag me out and carry me the best he could, with all the eyes around us on me, yes, I heard your whispers wondering if my child died. No, she didn’t die, but when you leave your child for the first time, a part of you does.

I felt anger. A lot of anger. Rage, even. Anger at doctors for not looking close enough. Anger about trivial complaints from friends or family. Anger at people thinking they were entitled to time with our daughter. Anger if you didn’t help me. Anger if you offered to help me. Everything anyone said to me, I took personally. Anger at the mothers with children perfectly healthy leaving the hospital every day. Angry at the mothers who never visited their child in the NICU. Anger at my husband, yes that sounds silly, but anger at him for not knowing how to fix me. I knew I was a mess, crying every single day, feeling intense anxiety. But what mother wouldn’t feel this way when her baby was going through this? As a mother of a child in the NICU, I had to do Post-Partum screenings at the hospital and at the gyno. Each time, I’d come out with borderline Post-Partum Depression. Every year that goes on you think would get easier right? Wrong, to be completely honest I have terrible anxiety and possibly even PTSD from what we went through. Until you’ve been in that position you get no right to judge a parent.

Kenleigh’s NICU nurse Karen, I didn’t know at first would be one of our biggest supporters. She and I had a routine, diaper change, vitals, skin to skin, her eating. Karen would have my cup fresh with ice water every day, reminding me to pump and to let me know it was okay for me to take care of myself too. Her doctors took the time to include me in their morning rounds and taught me as much as they could about her care plan.

When Kenleigh came home, everyone assumed the worst was behind us. But we were isolated, unable to have people over, unable to go out, and unable to connect with my family, friends, or even other moms. Carrying 3-4 tanks of oxygen to dr. appointments. Once she was home, I was constantly afraid she was going to just up and die. Would her heart monitor stop working, and we wouldn’t know that her heart had just stopped? Is she gaining enough weight? I would wake up all hours of the night, gasping for air. Kind of like when you feel like you’re falling and startle yourself awake. Only you can’t breathe and lay there unable to move in panic. There are days this still happens.

When you look at my Kenleigh you would never tell she’s a preemie. My fragile 2lb 5oz, 13-inch baby has grown into an amazing little girl. To us she’s perfect. She is amazing, smart, and most of all she is a fighter. I will be forever grateful she got my attitude. I don’t know, if she didn’t have my attitude, that my girl would be with us today. She has pushed past every milestone they have ever put there for her. Exceeding expectations.

Now that I have had time to sit back and grieve there are things, I will never get past. There are babies that were born at the same time as Kenleigh that weren’t so lucky. So have patience with us, we aren’t the same people who walked into that storm.

This is prematurity, this is PTSD, this is postpartum depression. This is my life.”

This story was submitted to Love What Matters by Kacie Evans, 25, of Ohio. Follow her journey on Instagram here.  Do you have a similar experience? We’d like to hear your important journey. Submit your own story here, and subscribe to our best stories in our free newsletter here.