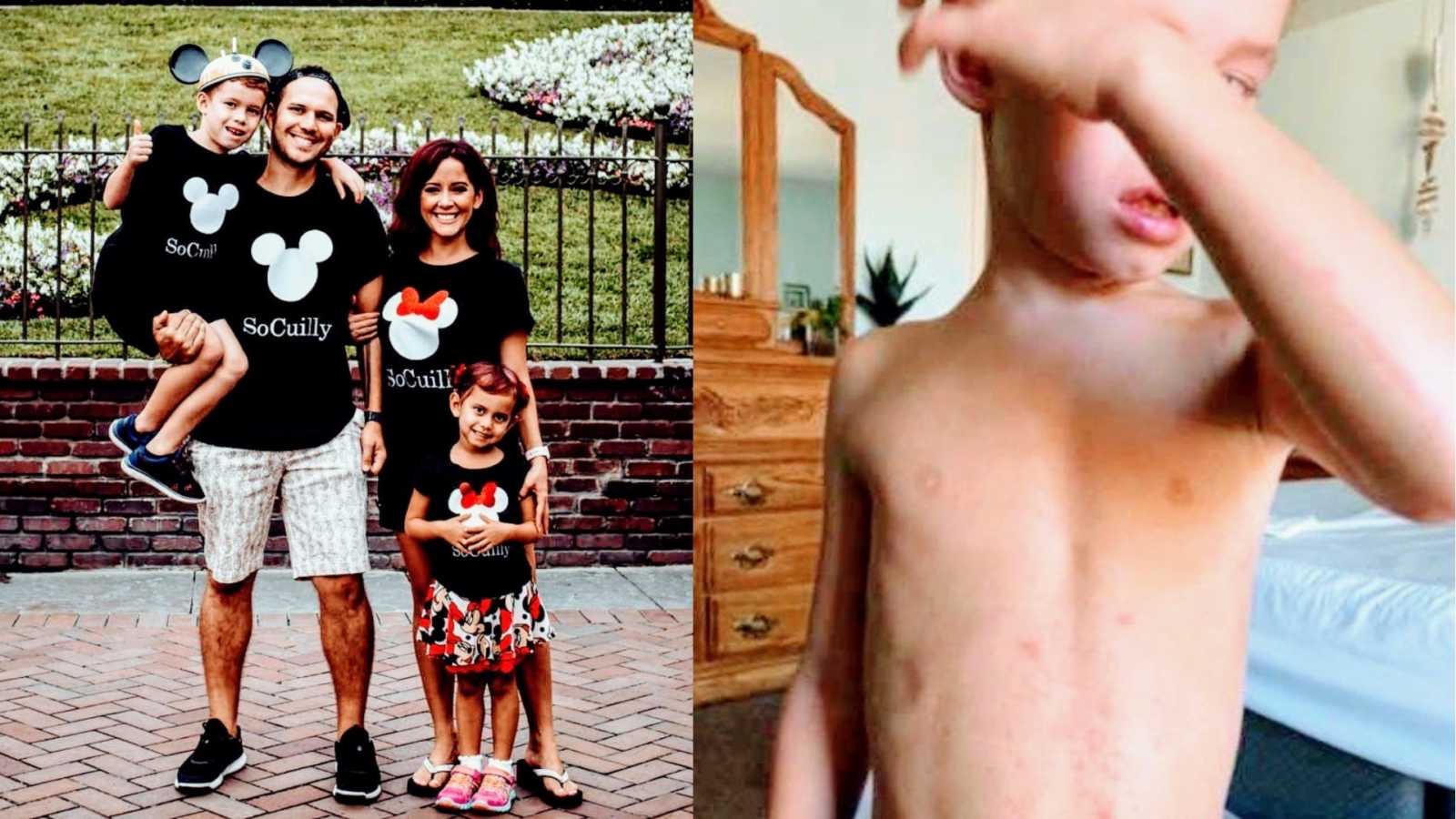 “Good afternoon all parents. Please take a second to read this! I want to share with you something that happened to my son. This can happen to anyone!

We went to Disneyland this week, and my son got 2nd degree burns on his hand and tummy. It was not from Disneyland, but it happened from being in the sun for long periods of time.

After 6 long hours in the car, we finally pulled up to our exciting uncharted destination. As we rolled down our windows to check out our cozy new fortress for the next week, the warm air smelled sweet and welcoming. Consumed with anticipation, as the kids hopped out they both agreed this was going to be the best week ever! We had never been camping at Disneyland and the fact we were interlacing their two favorite pastimes was just mind blowing to them. We were staying at an RV Park called Orange Land and it was no surprise that it had tons of luscious fruit trees.

Most of the fruit was ripe and so my kids asked eagerly if they could pick some. The kind park-worker told them with a smile to go right ahead and harvest as much as they wanted. Of course they were over the moon and ran around most of the afternoon as we set up camp, filling their paper bags with plump juicy goodness. I can still see my son proudly unloading his colorful loot onto the table as he began to count them. It was a humid early evening, so he did this with no shirt on. My kids had never seen a grapefruit because I don’t care to buy them, so we decided to cut one open for them to try. We all chuckled at their silly puckered up faces as they tried a few licks. The tart sour taste was a little too much for them so they passed out the remaining cut slices for the adults to enjoy. After that, we headed off to the pool for a little swimming before bedtime.

The next morning, we were up and at it early. The kids were so chipper, by 8 a.m. we were dressed, lathered with sunscreen and out the door to Disneyland. It was a great day and the weather was kind to us. It was mostly overcast with a hint of sunshine here and there throughout the day. The park was light in attendance, so we were spoiled by riding every ride a few times each. It was a long day of fun, about 10 hours, that flew by with a wink of an eye.

That evening before bed my son started telling me that his hand was stinging a little. After examining it carefully we decided it looked slightly puffy. There was a tiny red dot on one of his fingers which fooled us for a bite of some kind. So I dabbed on some aloe vera and arnica, gave him a little Benadryl out of precaution, and off he went to bed.

The next morning when the sun was just starting to peek through the blinds, I heard the loud thud of stomping feet across the trailer floor. It was our son rushing over from his bunk in panic. He climbed into our bed with his eyes wide with fear as he yelled, ‘Look at my hand!’ Still groggy from sleep, I was trying to figure out what the balloon-like thing was he was waving at us. After rubbing the sand from my eyes, I quickly realized it was his hand! His fingers were so big, they looked like over-cooked breakfast sausages that had big coin-sized blisters on them. His poor disfigured hand was bright red and throbbing.

As if that wasn’t frightening enough, there was a speckled trail of red blisters that led us to his stomach. We lifted his shirt to find his whole torso was completely covered in a terrible blistering rash! My parent adrenaline kicked in and I felt completely baffled by what was happening to my baby. When the blood finally returned to my brain it hit me. I tried to choke back tears as I became unglued with my realization. CITRUS BURNS.

I immediately started scolding myself as I gently wiped his hand clean. I felt like I should have known better! I’m a huge believer in Essential Oils and everyone who is educated about them will tell you to NEVER use a citrus oil topically and go out into the sun for a long period of time. There are compounds found in citrus oils known as furanocoumarins. These compounds greatly increase UV sensitivity and can be very dangerous and harmful to the skin if used improperly. Let me clarify something. I did NOT use a citrus essential oil on my son. What I’m afraid happened was he had been eating and handling a lot of citrus fruit the evening before prolonged sun exposure and the oils in the fruit peels had rubbed deeply into his skin causing a very painful reaction. Honestly, this possibility did not cross my mind because we had gone swimming shortly after and we washed up in the morning before heading off to the park. Who would have thought that some oils still remained and would be a recipe for destruction the next day?

His symptoms quickly worsened, and we headed to ER. They diagnosed him with ‘contact dermatitis’ and 2nd degree burns. He was immediately given steroids, antibiotics and Tylenol to make him comfortable. His hand is so swollen he can’t close it or use it. His stomach has an over populated community of bubbling blisters just waiting to pop. Even through all of this, I do have to say though our little guy is being such a trooper. He has learned what ambidextrous means and pretty much thinks it’s a super power. Since then, he has been trying to master the skill of using his left hand for everything. So much that last night, while he had his balloon-like dominant hand in ice water, he spent two hours building a 600 piece LEGO set with his left hand. His smile of victory calmed my hurting heart and I was thankful of his God-given strength. It’s truly amazing how something so unfortunate can teach such a valuable lesson. A lesson that sometimes can only be learned through experience.

I share this story in hopes to raise awareness. Just by confiding in close family and friends, I have realized that many aren’t aware of the serious dangers when it comes to citrus and sun. Even though it may be uncommon, it can happen to anyone. Please avoid all citrus fruits before going to Disneyland, the beach, or anywhere else you will be out in the sun for long periods of time. Seeing my son go through this unexpected misery at the end of what was supposed to be “the best week ever” pains my heart to pleading — please share this with all your loved ones, so they can enjoy all their adventures safely.”

‘Acid from the airbag burned my eyes. My first thought was, ‘Call Mom.’ I climbed out of my window, dripping in blood. ‘Mom, I crashed the car. I see cops coming. I love you.’

‘Peyton has 2nd degree chemical burns from his light up shoes.’

‘This could not be happening’: Mom warns how 6-year-old’s ‘growing pains’ were cancerous leg tumors

Please SHARE this article with your friends and family to raise awareness about citrus burns!