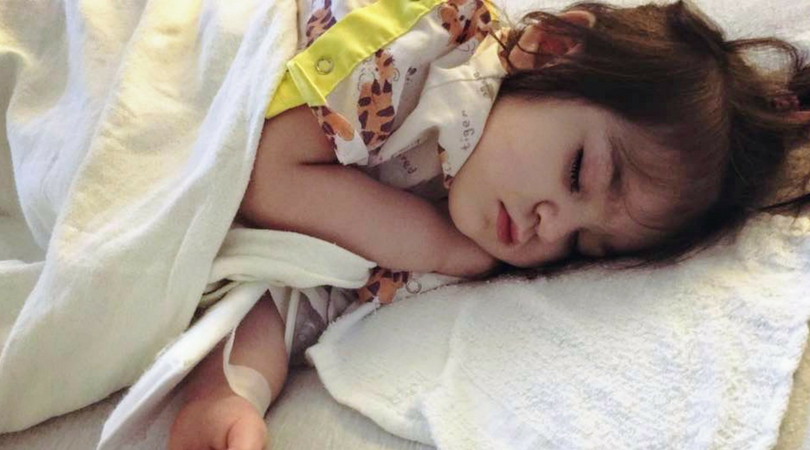 “Parents, I say this with every ounce of sincerity I have – YOU know your children better than anyone else in this world. You have been there with them for everything. You have changed every diaper, cuddled away every tear, kissed every booboo, cheered every milestone, hugged away every scary monster, and rejoiced in every smile. YOU know your children. Do not ever let anyone make you feel like you don’t.

I am essentially the very definition of mama bear. I have spent years advocating, fighting for, demanding, and ensuring my children are given the utmost respect and care they deserve. I have watched my children have their chest cracked open, their heart stopped and cut into, and rejoiced at the sound of it beating once again. I have watched them spend months in hospitals fighting for their life. I have advocated for better care so strongly that I have even gone before my state senate and literally changed the very laws of medical care for newborns to ensure the very best and most thorough treatment is given to every child in their rights to complete and comprehensive medical care. I’ve spoken to news stations and raised awareness and made sure everyone knew that medical care for children can and will be improved, because our children deserve it and we parents demand it. I do not stop, I do not sit silent, and I do not accept defeat.

And yet despite this, two nights ago I allowed someone with a medical degree make me feel, for a few solitary moments, like my gut feelings were wrong and I was overreacting to my child’s medical concerns. I allowed this person to make me feel like I was panicking where there was nothing. I allowed them to make me feel like maybe I was reaching because I was so conditioned to see the worst medical scenario with my chronically sick child that when my otherwise healthy child was ill, it was not as serious as I knew deep down it was. My concerns were not unwarranted, and I now know that what I felt before being belittled, ignored, and written off was 100% accurate; my child is seriously, seriously ill.

When we came in two nights ago, Harper had a 105.4 degree fever. I had spent three days and nights doing everything I know how to do to help her fight off whatever illness she had. I hadn’t slept, I had barely eaten, and I hadn’t had a moment to myself because I spent three days devoting my everything to her care. Not one to typically rush to the doctor for every bug, I did everything I typically do when my kids are sick. I cuddled and kissed and medicated and treated her with my very best. She only got worse, so as her fever continued to rise I made a decision and took her in to the Children’s ER. The doctor there saw her, heard our situation, and after an X-ray of her stomach and a cath for a UTI check, decided I was a young mom with no clue. The requests I made for more extensive testing- full blood work including CBC, BMP, and spinal went ignored, and we were discharged with the diagnosis ‘virus, probably, she’ll be fine.’ He was wrong.

Today, Harper’s temperature once again rose until it was 106.3 under her arm. Immediately, I called our family doctor’s office and after a conversation with our doctor’s on-call partner, it was decided the best course was to bring her back to the Children’s ER and demand the testing we had been previously denied. It couldn’t wait; Harper desperately needed relief, and we deserved more thorough answers. We got to a room and a medical student came to get her symptom information. He was in our room for all of 45 seconds before he stated, ‘I’m going to go get the medical team, I don’t think we should wait anymore.’ The residents and attending were quickly in our room, where they listened to my concerns, checked Harper’s condition, and quickly ordered an extensive list of testing. Finally, FINALLY, we were being taken seriously and we were getting our answers.

Without repeating the entire night, we found several hours later that what the first doctor had quickly diagnosed as ‘virus, probably’ appears to in fact be Kawasaki disease; an illness which causes major inflammation inside the walls of blood vessels and arteries requiring immediate hospitalization, immunoglobulin IV therapies, and aspirin to reduce the likelihood of blood clots within the heart. Given the history of cardiac disease and congestive heart failure in a sibling, Harper should have been tested for it because of her symptoms. Every day left untreated raises the risk of serious complications including heart failure and lifelong heart tissue damage, thus significantly raising the chances of early adulthood heart attacks and aneurysms. We won’t know until more testing is done if Harper’s heart is damaged. Had the testing I requested on our first trip been done, the second trip never would have happened. They’d have seen an issue, looked further, and found this days ago.

I will never allow my fears to be written off again. I know my children, and I know when something is seriously wrong. You do too. You are their voice and their advocate; don’t let anyone, no matter their degree or their opinion, make you feel like you don’t. You know them better and you can tell when something isn’t okay. Say so, and if someone won’t listen, say it louder until they do. Your child depends upon you to do so.

So after this book of a story, I’m left with one last thing. I promise my children and I vow to all my friends; I will never let anyone ever again make me feel like my intuition regarding my children is questionable. I’ll be the mama bear I know I am, and I won’t ever stop even if I have to piss some people off and demand more from them along the way. My children deserve it, and so do yours.”

This story was submitted to Love What Matters by Margaret Ellen Bradford of Ohio. Submit your story here, and be sure to subscribe to our best love stories here.

‘I just want you to know we are the family who adopted your son.’ She hadn’t gone a single day without thinking about him. ‘Can you be here in 2 weeks?!’: Adopted boy surprised with biological mom, now part of open adoption