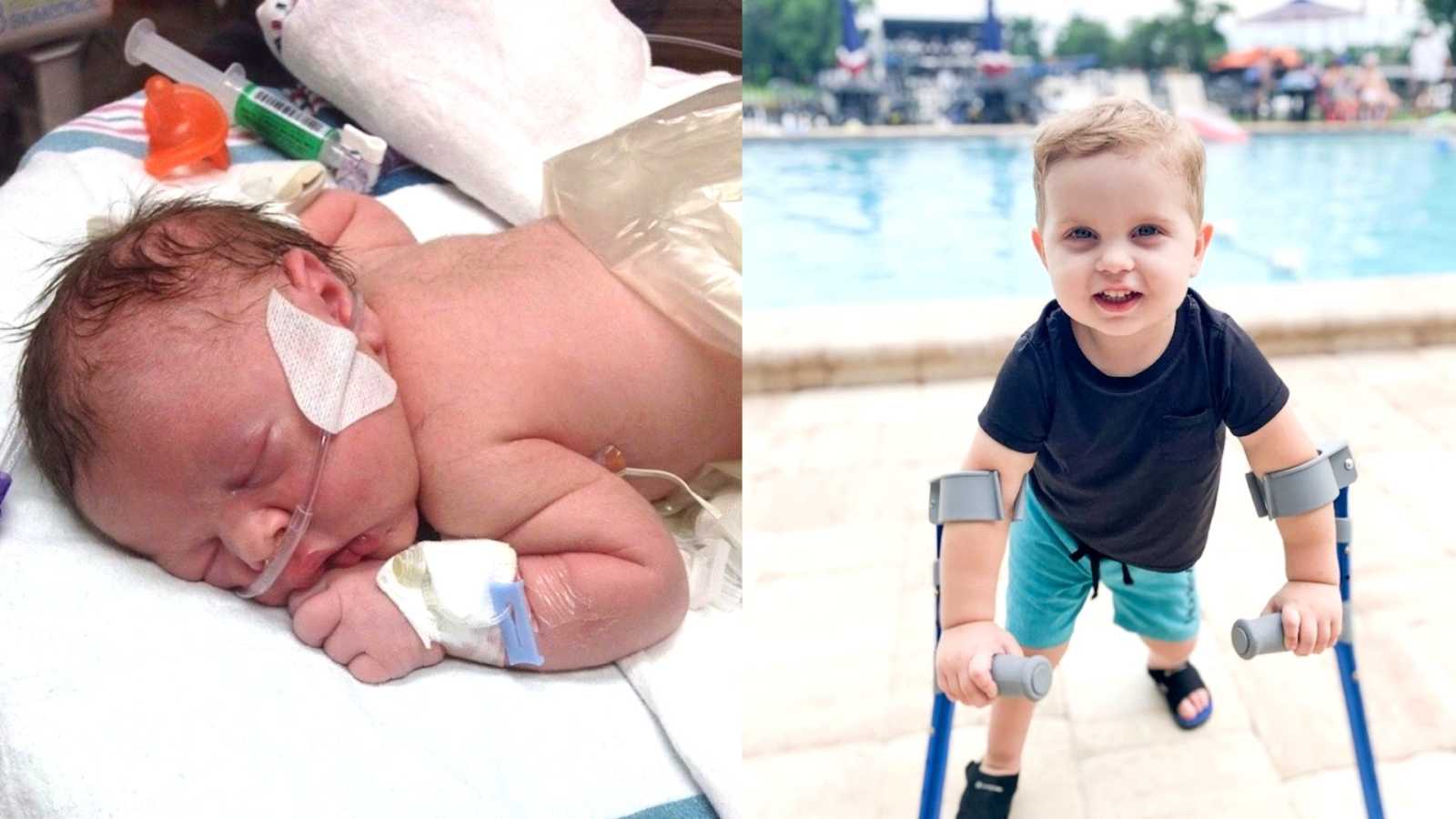 “I remember when the doctor said so nonchalantly, ‘Your baby has Spina Bifida.’ I looked at my husband with a shoulder shrug, like, ‘Oh okay,’ and then turned to the doctor and asked, ‘What’s that mean?’ I’m not sure what we thought it meant but we were not ready for the diagnosis we were given. He explained to us what it was and it would need to be surgically repaired – and instantly the tears poured out. How could this be happening again?

My first born, Sophia, now 8 years old, was born with a congenital heart defect. Three open heart surgeries so far. I guess we were prepared that something could be wrong with his heart, but his spine? Something so completely opposite, yet just as important. I remember feeling like I had failed again. As both a woman and a mother. How was my body not capable of forming a baby the way it was made to do? Both with Sophia and now Sebastian, ironically pieces so different from each other just didn’t connect. I just couldn’t grasp the concept no matter how hard I tried.

The doctor continued to explain to us what ‘Spina Bifida’ meant and all of the hardships that come with it like not being able to walk, not being able to control bladder/bowels, and a whole other diagnosis of hydrocephalus which also needed surgery. Basically, an overall poor quality of life. So bad that 70% of people choose to abort their child with the diagnosis. We were pressured over and over. ‘Get an abortion. Your time is running out. You know there’s a deadline on these things. He’s going to have poor quality of life. He’ll be just laying still forever. No head control, never sitting independently, never walking, paralysis.’ At every appointment we went to, this is what we were told.

It was so much information to take in. There are many different diagnoses that also followed. He has Myomeningocele Spina Bifida, the most severe form of Spina Bifida. It required a back surgery the same day he was born. Sebastian also has Hydrocephalus (a build up of fluid on his brain) that required a brain surgery the day after he was born. They put a VP shunt in his brain to drain fluid into his belly. He also has Arnold Chiari 2 malformation which basically means part of his cerebellum and brain stem extend into the back of his neck. He has sensory processing disorder, and he was diagnosed with failure to thrive because he is much tinier than your average 2 year old.

He now walks with arm crutches or ‘sticks’ as he calls them. He wears braces on his feet because he can’t feel them and they help him to stay sturdy . He also uses a walker for longer distances. Just last month he was invited to compete in his first adaptive sports event. He competed in the toddler games which included a long jump, a race, and a version of javelin.

Despite all of these challenges thrown at him, Sebastian is so awesome. He is like any other 2 year old. He is kind, he is funny, he throws temper tantrums, and he gets into trouble. He is more ‘normal’ than not. I am so thankful and so blessed to be his mom. Sebastian is such a fighter. He has already shown the world nothing is going to stop him in just the short two years he has been alive. He is walking, he is thriving, he is stubborn, he is head strong, he is determined!

He is not his diagnosis. He is so much more. No matter what is thrown our way, I’ll never give up on him. I will never give up my faith in our God and I will never let ‘can’t’ be a word in our house. Anything is possible, and Sebastian is living proof of that! I know he has a much greater purpose on this earth and we can’t wait to see what it is.”

This story was submitted to Love What Matters by Christene Marrero. Follow here on Instagram here. Submit your own story here and subscribe to our best stories in our free newsletter here.

‘I was told it was the ‘Cadillac of disabilities.’ His pediatrician even said, ‘Out of all the heartbreaking disabilities, his is also heartwarming.’ Down syndrome isn’t easy. We ARE special.’

‘Mrs. Morgan? We have a 3-year-old little boy in the PICU. He’s been here 6 months and needs a home.’