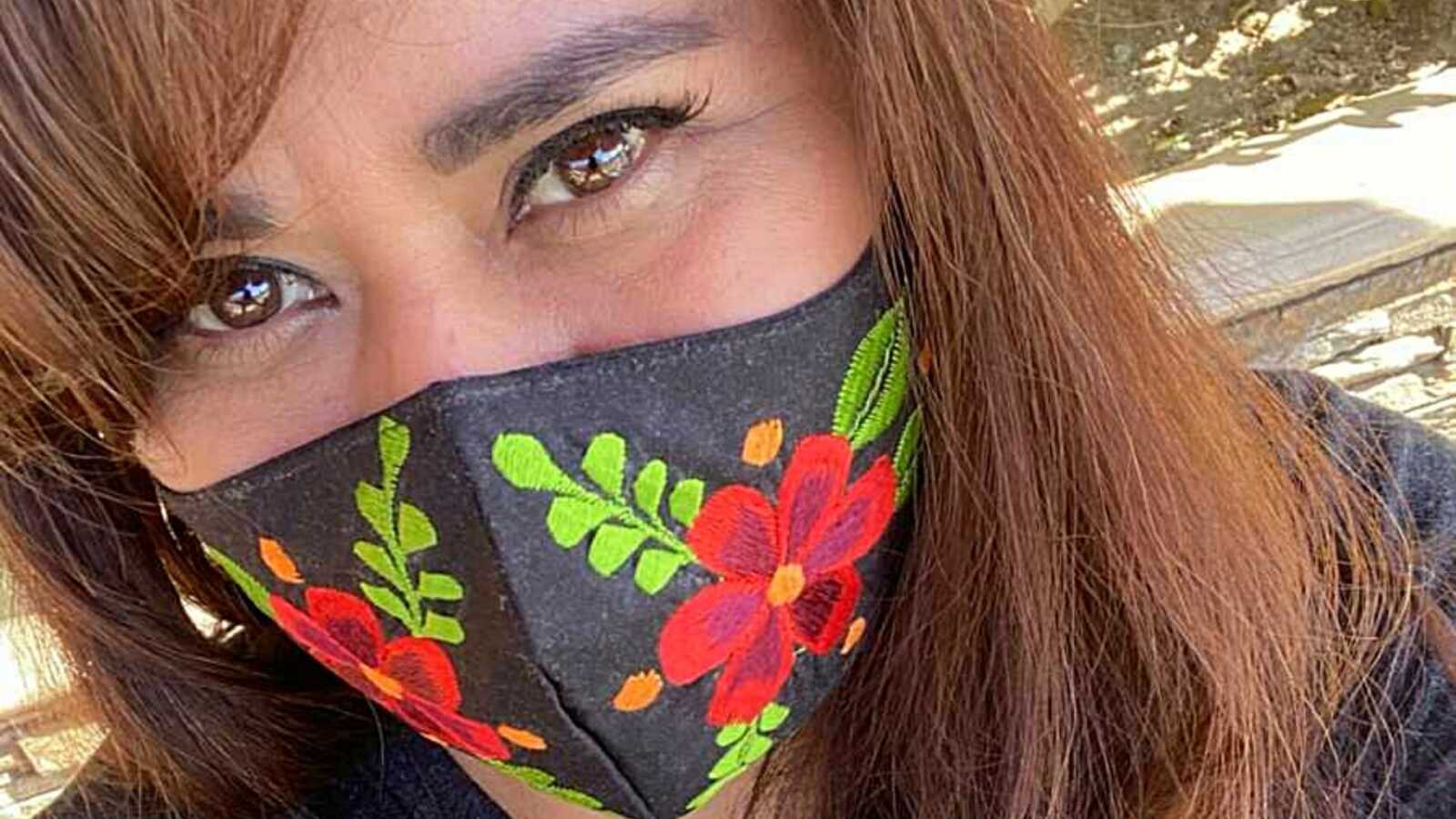 “My life has changed a lot in the last nine years, which is when my perimenopause symptoms first began. In 2012, I had a partial hysterectomy at the age of 42. Not long afterward, I started experiencing hot flashes and night sweats. Though the symptoms started out as mild, eventually they grew in severity and affected my quality of life. I soon became embarrassed to go out in public and experience a hot flash, which would always make me sweat. Even when I didn’t feel hot, I would sweat profusely and think, ‘What in the world is going on?’

As a caretaker for both my mother and father, I remember many uncomfortable moments while escorting them to the doctor’s office. On one visit, while taking my dad in for one of his many medical appointments, I realized mid-appointment how sweaty my arms and hands were. Could the doctor notice? Was the nurse judging my sweaty body? Thinking back to this moment, I can still feel how embarrassed and uncomfortable I felt in my own skin.

My symptoms continued for years with little relief. I felt like I was suffering in silence—were there other women going through a similar experience? I had so many questions, but didn’t know where to turn for answers. How were other women coping with these difficult and life-disrupting symptoms? Would I ever find relief? Would I ever feel like myself again?

After several years of suffering, I finally reached out to my primary care doctor to see if I was a candidate for hormone therapy, but he said I was too young. He also said that because my hormonal bloodwork came back in the normal range, there was nothing he could do. So I scheduled another appointment with a gynecologist, but he just told me to grin and bear it. I saw several more doctors, but kept receiving the same response. I knew my symptoms were real, but I didn’t understand why these doctors weren’t doing anything about it. Time and time again, I was told that my hormone levels were in the normal range, so it couldn’t be menopause. But what about perimenopause? What about the changes and symptoms I was experiencing leading up to menopause?

At this point, I was extremely frustrated and felt like I had run out of options. So I began my own research on herbal remedies. I found one over-the-counter herbal medication that looked promising and decided to give it a try. At first, it worked to reduce my hot flashes and I was thrilled! Finally, I thought, I found something that will bring me relief! Unfortunately, the relief was only temporary. After just three months, it stopped working.

When you live with persistent symptoms that disrupt your quality of life day-to-day, sometimes it can be hard to remember what life was like before the symptoms began. In my case, I had been living with hot flashes and night sweats for several years and had yet to find support. I could have given up and just accepted my new normal. I could have stopped advocating for myself, especially as my parents’ health continued to decline and my marriage ended. But I didn’t give up.

I found a new doctor who was female and more supportive of what I was going through. When I told her about the previous experience I had with the gynecologist who told me to just ‘deal with it,’ she was livid. I finally felt like I had found someone who would listen to my concerns and support me. Though she also measured my hormone levels and found them to be in the normal range, she was the first doctor I spoke with who was open to discussing my options. I was looking forward to working with her to find a solution when the world turned upside down.

It was March 2020 and we were at the precipice of a global pandemic that would forever change our lives. Early in the month, my in-person job as a pre-school assessor for a policy research company came to a halt. I transitioned to a full-time caretaker role for my 86-year-old mother who has mid-stage Alzheimer’s and for my father who was battling stage-four cancer. In addition to struggling with my symptoms, I was balancing caring for my ailing mother and father during one of the most challenging periods any of us had ever lived through.

Then, my father lost his battle with cancer. It had been a tough year full of grief, loss, and uncertainty. But after putting my own health on the backburner for several months, I decided that it was time for me to get proactive in dealing with my hot flashes and night sweats, which were still going strong nine years after they first surfaced.

So I began my search for non-judgmental and effective menopause treatment. After browsing popular options, I decided that I wanted a program that would offer virtual visits. Though I was unfamiliar with virtual care at the start of 2020, I knew that having access to medical care through the safety and comfort of my home would be important as I entered the post-pandemic new normal.

Then, I discovered a company called Evernow. They offered custom menopause treatments and ongoing online consultations with their medical staff virtually, so I could use the service on my smartphone. I was overjoyed at the prospect of finding a sustainable solution to manage my symptoms. After years of searching, I had hopes that Evernow might finally bring me relief. And it did.

Through supportive and empathic virtual visits, I was able to find the right prescription to alleviate my symptoms. Having online access to a supportive medical team really unlocked my ability to lead a healthier, symptom-free life. I finally feel like I have control over my body and life again! I don’t have to worry about my hot flashes or night sweats getting in the way of my life, and I couldn’t be more grateful.

What’s more, I have so much confidence now that I have better control over my symptoms. I no longer have to stress about breaking out into a sweat while in an air-conditioned room or being constantly vigilant about my symptoms. I’ve also been able to resume yoga, an activity that I really enjoy. Though I avoid Vinyasa yoga (which heats up the body), I’ve been able to get into a regular practice of easy flow classes, including Yin, Restorative and Yoga Nidra.

Though menopause is something that we’re all aware of, it’s not something that most of us talk about openly. Experiencing visible signs of hot flashes like I did made it difficult for me to go about my day without feeling some degree of shame or discomfort. I’m still on an educational journey when it comes to menopause, and I believe we all have more to learn.

I’ve recently joined a menopause group as part of my meditation app, Insight Timer, and it’s been impactful to learn about other women’s journeys. Unsurprisingly, many women have faced similar struggles when it comes to getting adequate care from their doctors, especially when their hormones are still in the ‘normal’ range. But I’m grateful to be a part of the conversation in helping other women to mediate stress and manage their symptoms.

It can be hard to know where to turn when seeking reliable information about menopause and menopause care, but I’m grateful for the support I’ve found through my meditation group and the medication and support that I’ve received. Now, I not only feel significant relief of my symptoms, I also feel more like myself. It’s empowering to know that my symptoms will no longer get in the way of me living the life I want.”

This story was submitted to Love What Matters by Leyda Paz. Submit your own story here and be sure to subscribe to our free email newsletter for our best stories.

‘I received a recall letter in the mail from the manufacturer of my implants.’: Mom of 4 details sudden journey with breast implant illness, pre-menopause, alopecia, and separation all in same year

‘He didn’t listen to my concerns and pushed me to medical menopause at 27.’: Endometriosis warrior shares struggles to find treatment

‘Ummm there are 3,’ the nurse said. ‘Three what?’ Babies! ‘One embryo splitting twice is a one in a million chance. We do not see this…ever.’: Woman battling infertility, early menopause conceives miracle triplets via IVF

‘I’m 46 and in menopause. But I’m NOT ready for this. I don’t WANT this.’: Woman shares struggle with menopause, ‘At least I’m still alive and functioning’