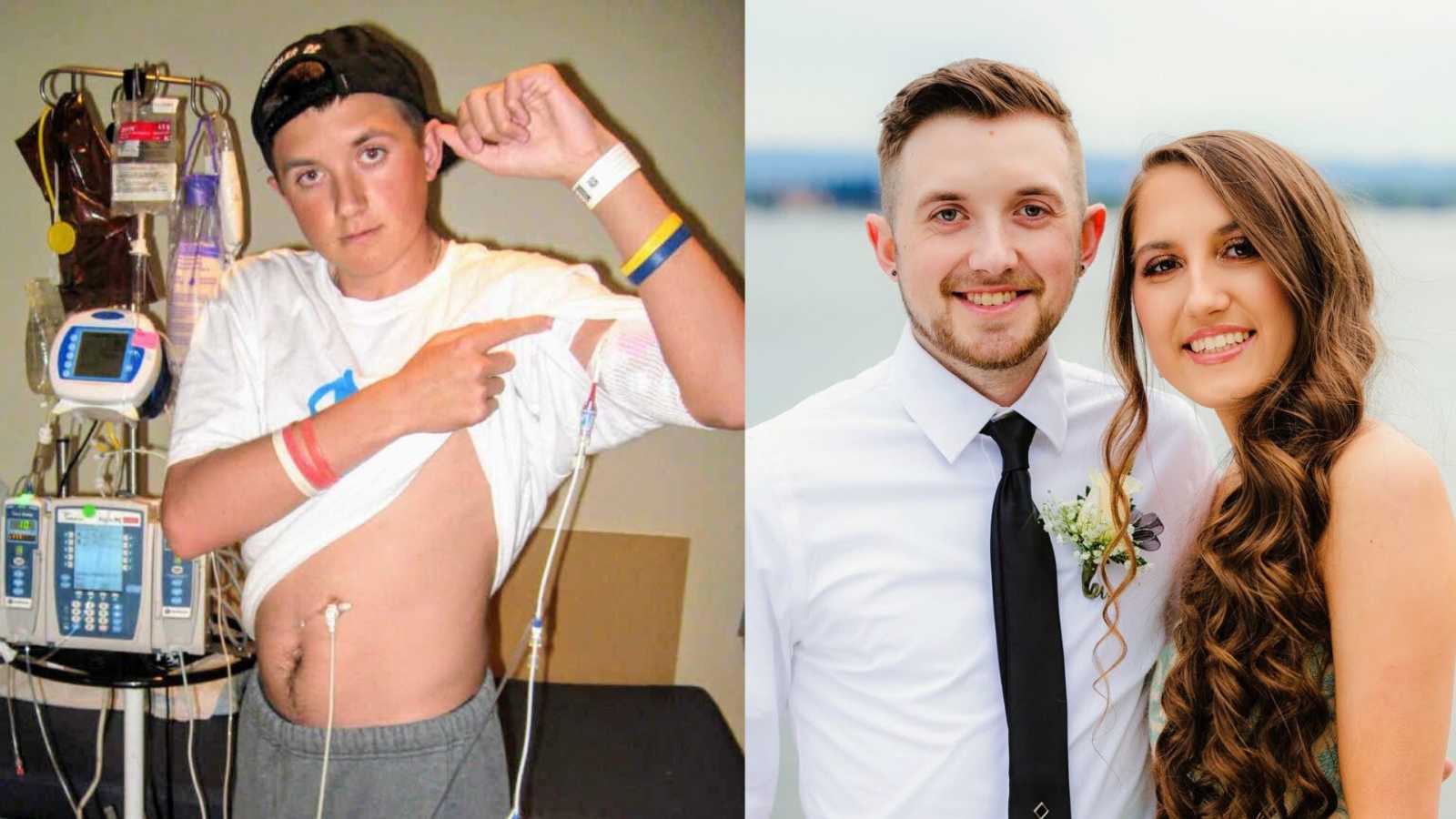 “Matthew was born with Cystic Fibrosis, a progressive, genetic, life-shortening disease in which there is no cure. Diagnosed at 4 months old after a failure to thrive, my brother’s reality would soon propel me on a path that would change the course of my life forever. It wasn’t until I was 10 years old that I realized he was dying. I’d always known he was sick, but I hadn’t yet grasped the severity. In a single moment, everything changed.

We knew something was wrong when my mom didn’t come home that night. I didn’t know it at the time, but she had gone to provide comfort to a family friend whose oldest son lost his battle to the same war waging inside my brother. The very next day, she sat us all down. It was the first time my two brothers and I heard the words, ‘He’s gone to heaven,’ and it wouldn’t be the last. Not even close. Just 7 short years this little boy walked our earth, leaving a lasting impact before he was taken away from us in an instant.

Suddenly, I was numb. A surge of emotions so deeply suppressed into my subconscious slowly made their way to the surface as I became overwhelmed with the reality of life. The reality of life being death. I was overcome with a rush of adrenaline as a loud noise filled my ears. It wasn’t until moments later I realized that noise had come from my own mouth. Sounds I didn’t even know were inside me. I screamed and cried as my mother held my tiny shaking body, my tears soaking the sleeve of her sweatshirt. I gasped for air while a pain so strong and sharp ran through my chest with every reoccurring thought. Each one momentarily fleeting from my mind, only to return again stronger. I had these thoughts my whole life but never the courage to voice them. They ate away and steadily consumed me from the inside out. ‘What if Matthew gets sicker? What if he doesn’t come home from the hospital this time? How much time do all my loved ones have?’

‘If one person I care about can be taken from me so easily, no one is safe, including you, Mom,’ I muttered through my sobs as if she could even make out what I was saying. After this inconceivable realization, I was in a constant state of panic. It was like a prison, controlling my every move at home, in school, out in public. My physical location didn’t matter, I was no longer in control mentally. My life was put on hold as the only thing I was capable of doing was attempting to catch my breath. Another wave of emotions inevitably came, rocked me to my core, and stole any power I once possessed over my own body.

It took weeks for me to regain even a semblance of control. ‘What is the purpose of my existence?’ was a question I asked myself every day as I slowly found my way out of this hell. I was heartbroken, angry, confused, and above all, I just wanted the hurting to stop. At the time, I would have done anything to get out of this vicious circle. Anything. I considered ending it and let me tell you, I am so damn happy I didn’t. I’m not ashamed to admit my struggles, rather I’m grateful for them because I wouldn’t be who I am today had it been any other way.

It wasn’t until years later I was able to answer that burning question that had once burdened me. I found my purpose. The one thing that left me broken and hopeless at just 10 years old would be the blessing that led me back.

For the past 19 years, I’ve watched my brother’s health deteriorate, helpless as cystic fibrosis overcomes his body. I have watched him be hospitalized over 35 times, with each stay lasting at least 2 weeks long and usually no longer than 3 months apart. I’ve watched him struggle every day trying to catch his breath from doing simple tasks that you and I don’t even think about, we just do them so effortlessly. I have watched him swallow hundreds of thousands of pills, withstand countless treatments, blood draws, PICC lines, a port placement, and bronchoscopy procedures just to maintain his current health before it once again inevitably declines.

I finally decided I was tired of watching.

I faced the fact that I can’t change what God has planned for my future or improve my brother’s health, no matter how desperately I long to or what I turn to in order to fill that void. Advocacy has been an outlet for me ever since this revelation and that’s what led me here to you today.

I started my Instagram as a means of keeping my family updated on Matt’s health and it has turned into so much more. It has allowed me to connect with those fighting all over the world and share my story, so they know they’re not alone. I have had the privilege of advocating on Capitol Hill for the importance of research to the NIH and FDA in the search for a cure among other things not once, but two times. And greatest of all, it has given me the gift of time with my brother as I stand hand in hand beside him in this fight.

As I continue to be an advocate for my brother and others with this horrible disease, I have learned the significance of participating in something that is bigger than yourself. When I tell my story, I’m speaking for all those battling for another day, month, year, even decades but it doesn’t stop there. I’m also speaking for you. 10 million Americans are symptomless carriers of the defective gene that causes cystic fibrosis. I am a carrier. Your loved one could very well be in the same position one day. If that day comes, I will be here to get you through it.

Along with my journey as an advocate, I am currently going to school to become a respiratory therapist. I know that may seem strange to some as I have had many ask, ‘Haven’t you had enough of this lifestyle?’ and the answer is simply no. My family spent nights in the hospital cafeteria instead of around a dinner table. We vacationed in the hospital courtyard instead of Hawaii or Disneyland. But through it all, we were together and there is nowhere I would rather be. I have grown up in a setting where hospital staff became more like family and the hospital itself became more like home. This was my normal and made the difference in turning what could have been the worst times of my life into the best. You see I feel that I am in a unique position to take what I have learned and give back. To do exactly for others what was done for me. And that is exactly what I plan to do.

Looking back, I am more and more amazed by this life I get to live. It’s crazy how you can hate something with every fiber of your being, but in the end, be consumed with so much appreciation for the memories gifted to you by that same monster. I despise CF for making my brother anything but healthy his whole life. I’m not going to sugarcoat it. This disease is ruthless. It provides challenge after challenge. It knocks you down when you’re already at your lowest. It separates families, year after year, during countless hospital admissions. It burdens the mental state of its host as if the physical limitations weren’t already enough. And in the all too common and painful reality, it steals our loved ones forever. It’s the strangest feeling to pull all those emotions, all that heartache and sadness, out of your core and lay it out on the table. To be able to look at it in front of you and turn it into something truly beautiful.”

This story was submitted to Love What Matters by McKenna Pozsgai. You can follow their journey on Instagram. Do you have a similar experience? We’d like to hear your important journey. Submit your own story here. Be sure to subscribe to our free email newsletter for our best stories, and YouTube for our best videos.

‘It’s time to consider a lung transplant.’ I was terrified of dying before I’d started living.’: Young woman with Cystic Fibrosis fights ‘to live the fullest life I can, in the time I am given to live it’

‘Are you scared?’ she asked. Breathless, I whispered to my mom, ‘No. It’s time to rally.’ I was so close to death.’: Woman with cystic fibrosis ‘in awe’ after gifted new lungs on verge of death, ‘the kindness of a stranger saved my life!’