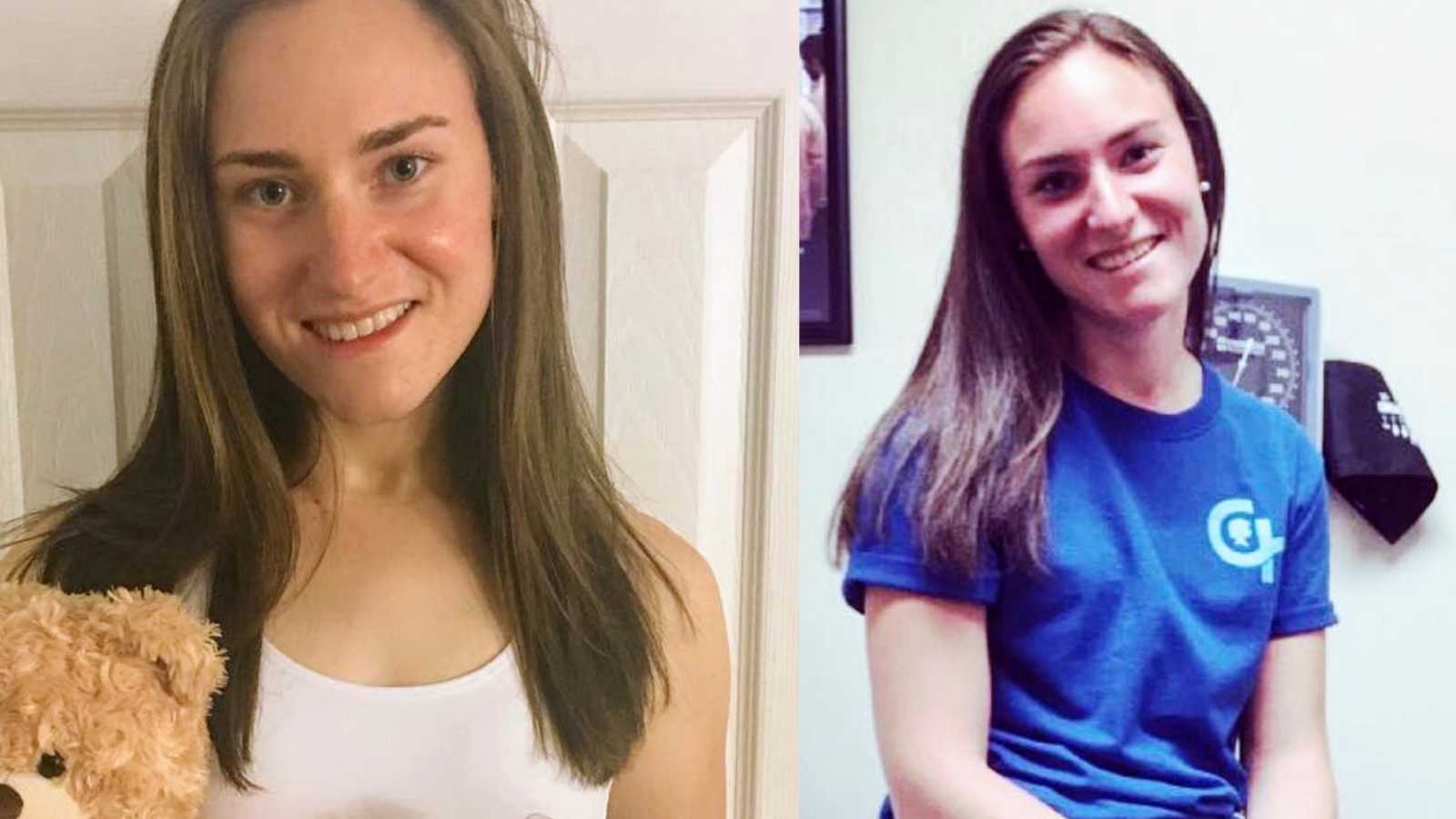 “I can’t remember the last time I ate without pain.

In what felt like the blink of an eye, I went from being my dad’s sous-chef, looking forward to the weekends when we could spend the day in the kitchen trying new recipes, to crying in pain after eating just a few bites of food. Over the next several months, the unexplained pain, fatigue, and weight loss continued until I became medically unstable and was admitted to one of the nation’s top children’s hospitals. They ran test after test, but not a single one gave us any answers as to why eating was causing me so much pain.

Eventually, the doctors stopped searching for answers and diagnosed me with an eating disorder. I remember that day like it was yesterday—a nurse came and took my parents into another room down the hall, then, not even five minutes later, a psychologist I had never met came into my room with a team of 10 doctors. These unfamiliar doctors stood surrounding my bed while the psychologist pulled a chair up next to me and said, ‘We have looked over your chart and have diagnosed you with Anorexia Nervosa.’ With tears welling up in my eyes, I was only able to mutter one question: ‘But why does it hurt so much when I eat?’ Nobody answered me.

For what felt like an eternity, I laid quietly in my hospital bed, still surrounded by these strangers who were supposed to be some of the best doctors in the country, until a young-looking doctor standing across from the psychologist broke the silence, ‘your head messing with you, there is nothing physically wrong.’

I spent the next 3 years in and out of the hospital pushing through the pain of being force-fed, but still experiencing worsening symptoms despite following my doctor’s instructions. As time went on I started to doubt my intuition and wonder if maybe this pain was my fault, but deep down I just couldn’t shake the feeling that there was something we were missing. So, what do you do when the people who are supposed to make you feel better only make you feel worse?

One night, as I laid in bed too nauseous to fall asleep, I overheard my parents talking to my grandfather, a physician at another leading children’s hospital, about how sick I was getting. We were all hesitant to leave the hospital where I was originally treated because it was supposed to be ‘the best,’ but my grandfather explained that no matter how smart or how compassionate a doctor may be, they will never be able to ‘fix’ every patient that comes through their door. All doctors have their own unique knowledge and experience, which they use as tools to address the needs of the patients who come to them for help. He explained that if the patient’s needs match with the doctor’s knowledge and experience, like a screw and a screwdriver, that patient will likely benefit from and succeed through that patient/provider partnership. On the other hand, if the patient’s needs were different, like a nail, for example, the screwdriver may be able to hit that nail into the wood a bit, but a hammer would be a better tool for the job. No matter how amazing that screwdriver is, it isn’t the tool that will be the most successful.

I know without a fraction of a doubt that my doctor cared and wanted the best for me, but her knowledge and experience just wasn’t the right tool for the job. I didn’t know where I was going or what I was looking for, but I was finally ready to take a leap of faith and trust that there was a doctor out there who did have the right tools for my condition.

In December of 2016, my mom and I made the trip from Philadelphia to Herndon, Virginia to meet Dr. Abdallah. He spent almost an hour with me that day talking through my symptoms, my priorities, goals, and my medical history from MY perspective, instead of the version my former doctors had determined, then asked me why nobody was trying to figure out the reason for all my symptoms. I sat speechless for a second, trying to wrap my mind around just how far we had strayed from the very question that set us on this journey in the first place… ‘Okay,’ he said, ‘Now we are.’

Over the next few months we ran test after test and trialed several treatments, but nothing could ease the pain. At this point, I was sustaining myself with nutrition I received through a feeding tube surgically placed in my abdomen to bypass my stomach and was starting to come to terms with the possibility that I was going to have to live like this for the rest of my life.

By the summer of 2017, after five years of dead ends and more questions than answers, I was ready to give up, but Dr. Abdallah said he had one more idea. He took me across the hall to look at the area where my pain was, towards the middle just below my ribs, with the ultrasound. My feeding tube made it difficult to see the whole area, but he found that I had elevated velocities in my celiac artery, which led him to believe there could be something compressing it.

Finally, a clue! Our next step was a CT angiogram, but it had to be at a hospital near his office where he knew they would do it correctly—take the images on the exhale. Yes, that meant another 3-hour train ride down to Virginia for a 20-minute test, but when you’ve been sick for so long with no explanation as to why your body was slowly shutting down and are lucky enough to find even the smallest glimmer of hope, you find a way to keep that hope alive.

The train ride down to my follow-up appointment felt like an eternity. I had become so accustomed to the disappointment of hitting dead ends that I just wanted to get it over with as quick as possible.  Dr. Abdallah walked into the exam room with his computer pull up the results of my CT Angiogram… he looked up from the computer and just says, ‘this is big—we found it. You have something called Median Arcuate Ligament Syndrome, it’s very rare, but we can treat it with surgery and I know an excellent surgeon who will take care of you.’

With tears welling up in my eyes once again, I asked, ‘Is this is why it hurts so much when I eat?’

He looked at me, smiled, and answered, ‘yes it is.’

Median Arcuate Ligament Syndrome (MALS), which has also been called Celiac Artery Compression Syndrome or Dunbar Syndrome, was first discovered in the 1960s, but by 2012 when my symptoms began, there were had been fewer than 500 MALS corrective surgeries. I have lived my entire life with an anatomical anomaly—my diaphragm sits too low, which in turn lowers the median arcuate ligament onto the celiac artery and celiac ganglion nerves. With every breath I take, as the diaphragm rises to exhale, the ligament compresses my celiac artery and surrounding nerves. This interrupts blood flow and, over time, causes the nerves to get inflamed. For me and many others with this abnormally, it can cause upper-abdominal pain (particularly after eating), persistent nausea/ vomiting, exercise intolerance, and significant weight loss that may mimic more common GI conditions, but unlike those conditions, MALS won’t show up in bloodwork or in standard tests/scans.

Although I was born with the anatomy, my journey towards a diagnosis began approximately 6 years prior when my symptoms became severe enough to interfere with all I wanted and needed to do to keep up with my peers. Like many others with rare diseases, my journey to a diagnosis was grueling—It took 342 clinic appointments, 12 ultrasounds/echocardiograms, 33 scans, 2 nerve biopsies, 3 outpatient procedures, 119 IV starts/blood draws, 3 days with oxygen support, 44 different medication trials, 8 feeding tube placement/replacements, 12 emergency room visits, 2 surgeries, and 45 days spent in the hospital to find a doctor with the right tools to address my unique symptoms and find a treatment.

Rare can bring us together. It deepens our connections with family, it teaches you who your true friends are, and it brings strangers together as allies against a common enemy. Rare isn’t something to be ashamed of, no, it’s something to be celebrated! Today, I appreciate all I have learned on this journey and all who are traveling with me, because as long as we’re in this together, we will get each other through it!”

This story was submitted to Love What Matters by Sara Cohen from Philadelphia, PA. You can follow her journey on Instagram . Submit your story here, and subscribe to our best stories in our free newsletter here.

‘This is clearly a case of anorexia. You’re a teenage ballerina refusing food.’ No one believed me. Every doctor gave up, except one.’: Woman with MALS misdiagnosed after 20 years

‘They told me, ‘There’s no way you have that. Take an antidepressant.’ I was in horrible pain and no one was listening to me.’: Woman living with chronic pain shares diagnosis journey

‘I realized I couldn’t remember the last time I had used the bathroom. The more I tried to go, the more pain I was in.’: Lupus warrior shares journey with multiple chronic illnesses

‘The doctor secretly put in my chart, ‘Borderline personalities due to dislike of multiple providers.’ I was down to 107 pounds, in constant pain. No one was willing to listen.’: Nurse, chronic illness warrior shares emotional journey to diagnosis