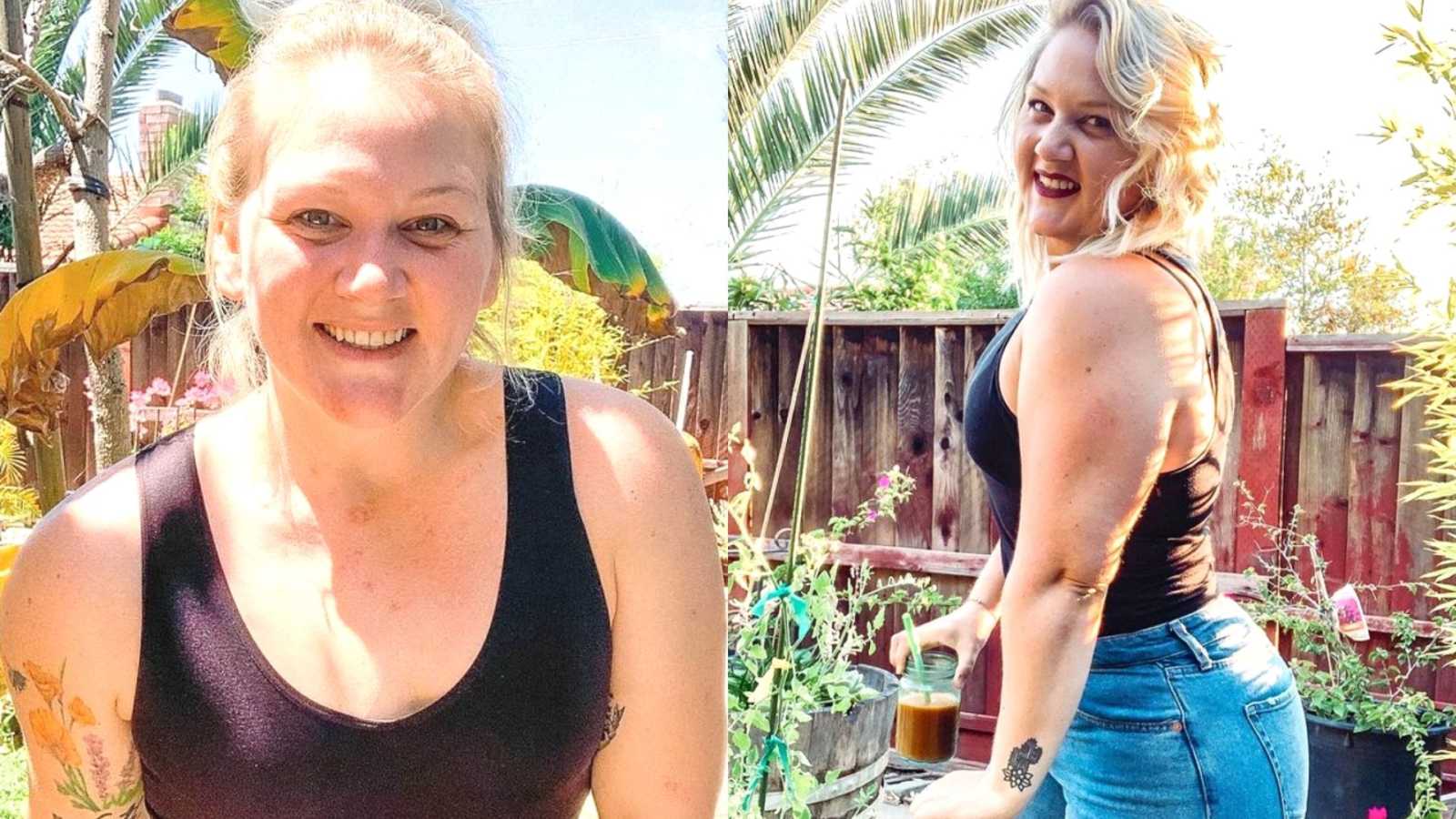 Trigger Warning: This story contains mention of eating disorders that may be triggering to some.

“My first memories of becoming worried about the foods I ate are around the time I was in middle school, 11 or 13 years old, but I became aware my body wasn’t acceptable a long time before then. From being berated in the second grade by a boy telling me how ugly and worthless I was to the struggle in finding clothing that fit and the disappointment in my mother’s eyes, I knew my body being larger was not okay with society, my peers, and my mom, by the time I was in fifth grade. My mom grew up in an era where ‘thin was in.’  I believe she struggled with her own insecurities about her weight and I got taken along on the ride of fad diets, diet pills, and guilt, thus creating my own love-hate relationship with food. I remember her criticizing herself, saying things like ‘I’m so fat,’ a mantra I quickly adopted myself.

In sixth grade, I attended my first Weight Watchers meeting and I remember being really excited about all the low-calorie snacks I wanted to buy and hoped would miraculously make me thin. Each week we would sign in, pay our dues, and lined up to get weighed in to see if our ‘hard work’ the previous week paid off. I use quotes because it wasn’t like my mom and I were working out daily, what I now consider hard work, but instead were substituting our favorite meals with low calorie, high processed foods that left me feeling hungry all the time.

On the other hand, we were also a busy family with sports commitments each week, so our family leaned on convenience as well. We counted points in the grocery store and bought ‘low-cal’ processed foods, but somehow managed to still make a pass through the McDonalds drive-through, justifying it as ‘the last time’ before getting really strict then throwing in the towel on caring about calories altogether. This cycle continued each year through high school for me, attempting to get ‘fit for summer’ with the newest fad diet while ultimately caving to the holidays and promising to ‘try again in the New Year.’

My mom and I jokingly would say to each other we ‘could never be bulimic, because throwing up is awful,’ so instead we would try our hardest (and fail) at restricting all the foods we actually enjoyed. Food typically had guilt associated with it. My mom reminding me constantly to ‘not eat too much’ of foods that were considered bad. Honestly, we loved food and loved to eat, so we tried all the quick fixes on the market that promised overnight results with hardly any change to our diet or exercise routines.

I think the biggest kicker around this time was I never really hated my body. I hated that shopping for clothes was extremely difficult, running in PE sucked, and I was judged by a lot of people purely based on my size, but I never felt a constant disdain for my body. I wanted to be accepted for who I was regardless of what the scale read, but I kept getting messages from the world the only way was to be thinner.

My mom passed away from ovarian cancer when I was 19. I was submerged in the college atmosphere and quickly dropped every food rule I grew up with. I ate as much as I wanted, we made late-night drive-thru runs, I politely declined my roommate’s invitation to workout. At the time, this felt like food freedom but thinking back on it now, I was in a binge cycle constantly and used food and other substances as a way to cope with my mom’s death. It was fun, but it definitely wasn’t sustainable.

During my early to mid-twenties, I felt the pressure to lose weight bubble up again. I was living by myself while attending graduate school and I ultimately used dieting as a way to feel in control while feeling so lonely and processing the loss of my mom. I invested a lot of money monthly into low-calorie foods and weighed myself daily.  The weight melted off, but that was only because I was eating less than 1,000 calories a day and exercising a few days during the week.  Honestly, the praise I got for my weight loss was ridiculously high. Everyone from people I went to high school with to bartenders were suddenly giving me more attention because I was thinner. ‘You look so great!’ ‘How did you do it?’ ‘You’re such an inspiration!’ All of my wanted validations as a teen were coming true, but I wasn’t happy or healthy, and sometimes I hardly recognized myself. The eating habits I had at the time were expensive, definitely influenced by depression, and ultimately unsustainable.

When I decided I no longer wanted to eat the high processed low-calorie snack foods I had been ordering monthly I decided to dedicate a lot of time to work out, partly because I was gaining weight from eating more calories. I found a love for the gym I had never had before. Getting in my zone, blasting music, and getting my heart rate up became something I really looked forward to, but unfortunately would also focus way too hard on how many calories I could burn and would end up spending nearly 2 hours there each visit. I used exercise as a way to counterbalance what I ate during the day. I began to feel like I needed to earn or work off my calories and fell into this cycle for about 2 years.

I began following my now-friend, Cait, on Instagram when I was trying to get all the motivation to keep up my two-hour workouts. She talked about eating nutritiously dense food, working out at home, and having a community of women doing the same thing supporting her. ‘You don’t have to do this alone!’ She would share while showing off her toned core. Her results were AMAZING, and it didn’t seem like anything extreme was needed to get them. After being skeptical and taking about 7 months to consider, I joined her. I was so tired of feeling guilty when quick fixes didn’t work, feeling hungry all the time, and just wanted something easy that would get me results while focusing more on being healthy all around. Cait has been a consistent supporter since joining her team 3 years ago. She’s always there to celebrate my wins or rethink strategies to reach my goals, but most importantly Cait’s helped me trust my own intuition when it comes to knowing my worth regardless of my size.

This is very much a new feeling for me. It wasn’t long ago I was stressing out overeating too many carbs. I would be lying if I said all my anxiety around food was gone, but I have found a way to give myself grace and appreciate the body I have right now instead of working for a body I once wished I had. I’ve learned the scale will never validate the hard work I put in like I want it to, so I have found ways to measure my fitness successes that make me feel happy. For example, I love seeing my quads get more defined as I finish up my current resistance and running training program.

I give a lot of credit to the body positive movement for shining light on the beauty of bodies at any size. The validation that has come from the media becoming more inclusive of body types has been a huge influence in me no longer striving for being skinny, but working to be healthy and happy in fitness, nutrition, and my mentality.

Daily, I try my best to not restrict myself from any foods that I want. I am conscious of my hunger cues and stop eating when I am feeling full. My new mantra is ‘I love my body today.’ I do have some food principles I try to follow, but they don’t have anything to do with restricting and are just reminders to eat all the food groups. I feel proud of myself for getting to a space where I don’t stress out about food all the time and mostly wish my mom was here to reach this peak with me.”

This story was submitted to Love What Matters by Katie Holscher from San Jose, California. You can follow her journey on her Instagram. Submit your own story here and sure to subscribe to our free email newsletter for our best stories, and YouTube for our best videos.

‘You don’t deserve to die.’ Seeing the number on the scale became an obsession. I struggled to find the strength to fight.’: Teen recovers from eating disorder, ‘You can set yourself free’

‘Nobody commented on my bathing suit. Not only that. My butt. I’m sad now, you see. I was never a bikini kind of girl.’: Woman struggling with body positivity says ‘the world isn’t judging you like you think it is’