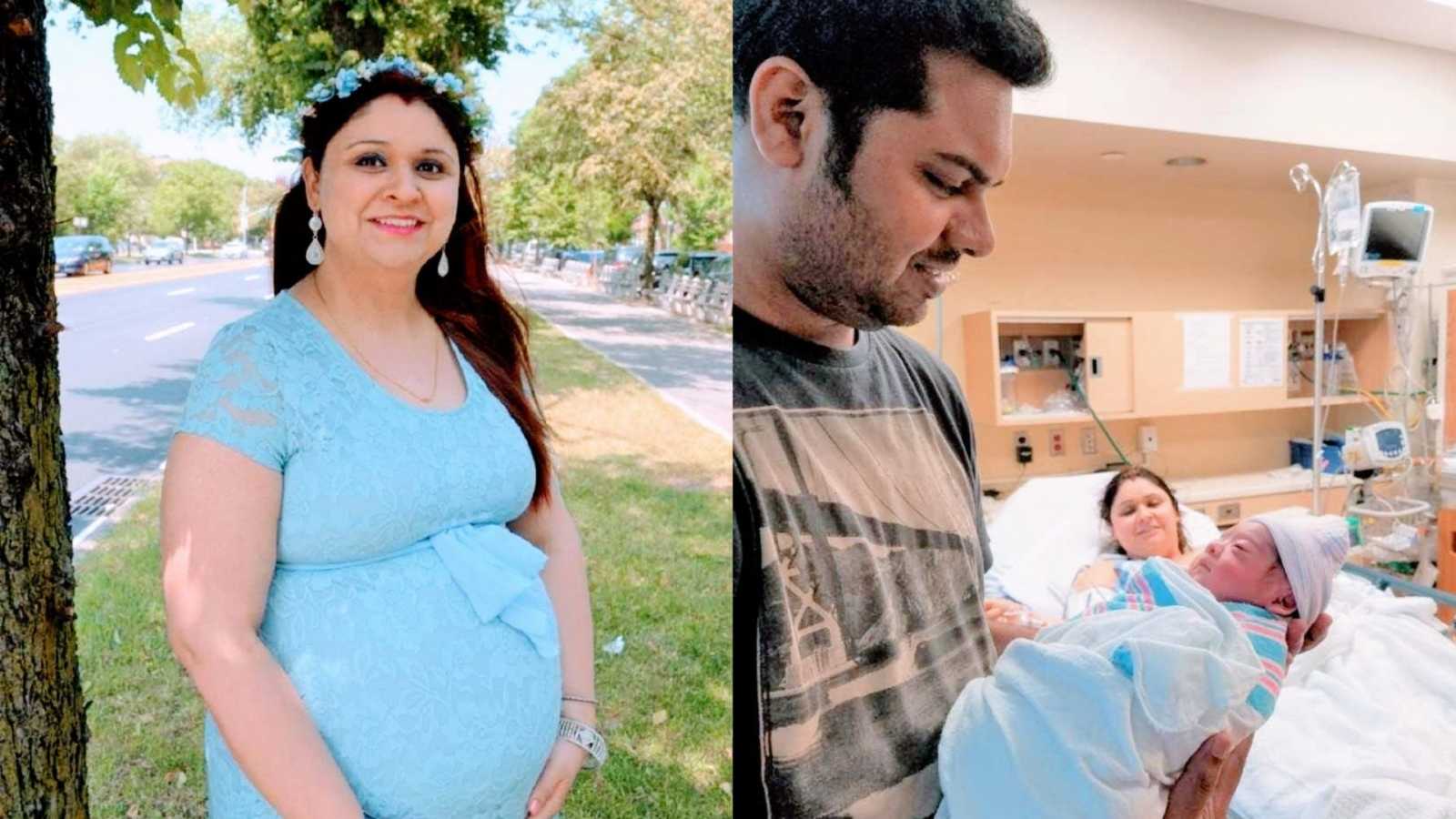 “When Laksh was born in the summer of 2017, I felt cheated and betrayed. Even after losing 70 pounds, eating right, getting all my blood work done, taking my prenatal vitamins, and doing everything the doctors asked me to do, I still got a baby that was not ‘normal.’ Before Laksh, I had a miscarriage at 5 weeks. Instead of telling me miscarriages are quite common, the doctor indirectly told me it was my weight that caused it. That shattered me.

On top of losing the pregnancy, I was now feeling guilty that I somehow caused it. This led me to come up with a plan: switching OB’s, and then following everything the doctor said to the T. When I was pregnant with Laksh, I was eating right and walking a lot so I did not gain much weight. This also became a reason for me to get yelled at by the high-risk OBGYN.

Why did I see the Maternal Fetal Specialist? It was because Laksh was measuring small on the ultrasound right from the 20-week anatomy scan. He was 11th percentile then and with every subsequent growth scan, he kept falling below. This is why the specialist told me I was purposely starving my unborn child by not eating. They said his heart could stop anytime without me knowing. This made me do kick counts two to three times a day and we bought the fetal heart rate monitor for home use.

I remember telling my husband I was relaxed between doctor appointments. I enjoyed my pregnancy, ate different colored foods, and drank lots of milk like the dietician recommended. I went for walks while connecting with my unborn baby by talking and singing to him. I also celebrated my 32nd birthday while pregnant. Our friends surprised me with a baby shower with messages from all my loved ones.

And every time I went to the doctor, they would freak me out. Everything would check out fine during the NST twice a week, yet she would say horrible things to me. There were two high-risk doctors, one of whom was genuinely nice. He was kind, patient, and always highlighted the positive. He told me they were going to give me steroids to make sure the baby’s lungs mature in case we have to deliver him early. Every time, I would always hope for him, but ended up seeing the female doctor more often.

She would not even allow my husband to come in for the ultrasounds. He waited outside and could only come in when they revealed the results. This is so strange. When I went in for my routine 36-week appointment, they found low amniotic fluid. They decided to admit me for 24 hours to monitor. That was July 31st, 2017. The baby’s heart rate dipped twice through the night and came back up as soon as I lay on the left side.

The following morning, a panel of doctors came into our room and told us they would like to do a C-section immediately since it would be safer for him outside. We were told he probably needed to go to the NICU because he was a mere 4 pounds. We scrambled around calling everyone back home in India, which is 9 and a half hours ahead of New York, to tell them our baby was going to be born that day.

My husband’s mother and sister had come to visit two days before. They were at our home, but he could not pick them up or he would have missed the birth of our first child. My in-laws took a cab to get to the hospital while I was taken to the OR to prep. The entire time I was in the OR is a bit fuzzy due to the panic. I only remember two things: hearing Laksh cry followed by tears of joy, and being told Laksh had Down syndrome.

The pediatrician in the OR assumed we had a prenatal diagnosis and was super blunt about revealing this to us. I remember telling her, ‘No, you are mistaken. You have us confused with a different baby that just got delivered in the same OR.’ I had a very low chance of having a child with Down syndrome and nobody noticed it on the million ultrasounds that were done throughout the pregnancy. The doctors suspected Laksh had IUGR, and it turns out he was weighing where he should be at 36 weeks.

After Laksh was born, I breastfed him for the first day of life. It felt like life couldn’t be more perfect. Even when the doctor’s words of Down syndrome were looming in the back of my mind, having my perfect little baby in my arms latching like a pro was my definition of a victory. Then the next morning, something happened that began our 2-month-long journey in the NICU.

When Laksh was less than a day old, he vomited bile when the pediatrician entered the room. The nurses rushed in and admitted him to the NICU. We were told that something was wrong with him, as vomiting bile is not normal. As new parents, my husband and I were terrified. I remember only crying and praying. Our son had to be transferred to a better-equipped NICU in Manhattan. My husband and my one-day-old baby were taken away from me in an ambulance and all I could do was stare. I could barely stand because I was only one-day post op.

Our son was later diagnosed with Hirschsprung’s disease and we were told he needed surgery in order to survive. Laksh was put on only IV fluids and couldn’t have anything by mouth until his surgery. When he was 3 weeks old, he underwent his first surgery. We were told the procedure would take 4 hours, but it took over 7 hours. The longest 7 hours of our life. My brave baby came out of it like a champion. To the doctor’s surprise, he removed the breathing tube himself while recuperating.

Weeks later, as we were getting hopeful of going home, Laksh vomited again. This time they said a thousand things could have gone wrong and he would need another life-saving surgery. Thankfully, it wasn’t that serious. He had developed adhesions from the previous surgery that needed to be released. He began his journey of relearning how to eat by mouth to gain weight.

After the surgery, the doctors wanted to take it easy and start with Pedialyte, and if all went well, they would progress to breast milk via bottle. Laksh got tired and would not feed large amounts. This was attributed to reduced hematocrit levels that he later received a blood transfusion for.

While all this was happening, I was alternating between frantically pumping and sitting by my son in the NICU. When they finally said we could start breast milk, I was so ecstatic. A few days into that, they suspected he had a protein allergy and I needed to exclude dairy. In the meantime, they put him on formula. My heart shattered into a million pieces. I was told this news while I was pumping in the hospital’s lactation room.

Eventually, Laksh was discharged on a special formula that was easy to digest. When Laksh started rice and oat cereal, I used frozen breast milk and mixed it in to get my son to drink breast milk and get his immunity up. Even though Laksh did get breast milk in him eventually, the option of breastfeeding was taken away from me for his health.

Our son finally came home when he was 2 months and 5 days old. Now, Laksh is 3 years old, just started remote preschool, and is an older brother to 3-month-old baby Veer. They share an amazing bond already. He has had 1 surgery to correct the umbilical hernia he was born with, and 6 surgeries to manage his Hirschsprung’s disease, two of which happened during the Pandemic.

In all these years, we hardly ever thought of Down syndrome to be a limiting factor. Yes, I did grieve the perfect child that I was hoping for, but once that was done, I came to realize there is no one more perfect than my precious Laksh.

The word ‘Laksh,’ means goal in Hindi, which couldn’t be a more accurate description of him. When he sets something as his goal, he doesn’t let anything stop him from getting to it. It might take him a day, week, month, or longer, but he gets to it eventually. I want people to see Laksh and his infinite possibilities. I don’t want them to put him in a box. No one likes to be put in a metaphorical box anyway. Give him a chance to dazzle you with his personality, because I promise if you do, he will dazzle the hell out of you.

Limitations are only limiting when we give them that power. Take people for who they are and not what the world conditions you to believe. Laksh is more loved because, and not despite, his diagnosis.”

‘But it doesn’t run in our family!’ I’m too young for this. Is it really happening twice?’: Brother with Down syndrome helps parents accept son’s diagnosis, ‘We had so much hope because of him’

‘The subject line read, ‘Down Syndrome Baby.’ My heart skipped a beat. That very morning a precious baby boy was born.’: Cancer survivor adopts ‘special gift’ son with Down syndrome after infertility from endometriosis