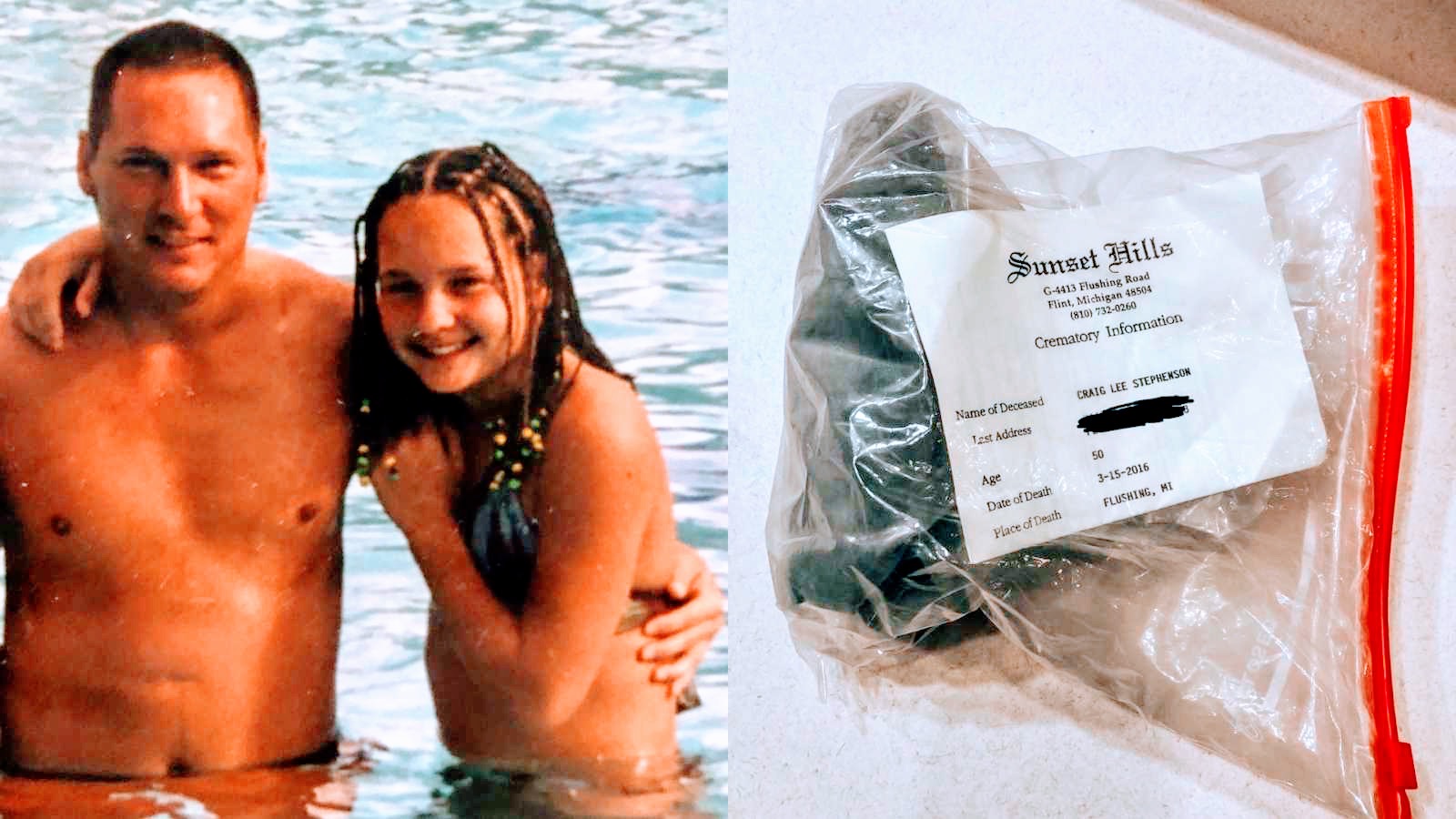 “Coping with my dad’s death comes in waves. Some days it’s not hard to process, some days I pretend it’s just been some time since we’ve been able to talk, and some days I curse everything in my path with anger. What I wouldn’t give to be able to hug him or talk with him about my life.

There’s really only one particular aspect of his death I haven’t been able to cope with yet. Before he died, he requested to be cremated. I mean, even I want to be cremated. It seemed like a no brainer. You know, ‘easy peasy…I’ll get to keep a part of him forever and I’ll be thankful for that.’ Except that’s not how it happened. Don’t get me wrong, I couldn’t imagine my dad laying in a coffin in the cold ground. At first I was super thankful for that cremation decision.

But then he died, and I didn’t know how badly cremation and those ashes would haunt me.

The idea crumbled me. Knowing he was there at the crematory and knowing at any time between the two or three days his body sat there…it’d be his turn. Was I eating lunch when they loaded his body in? Was I nursing my twins? Was I laughing with my husband over a funny memory as we looked through his old photos? Would it happen when I was screaming his name in the shower as the hot water burned my skin…and as actual fire burned his, potentially at the same time? Every time I looked at the clock, I wondered if it was his turn.

Does this sound incredibly morbid? Because it was numbing in the moment.

Now I’m just supposed to keep these burned particles of him as comfort? I’m just supposed to be happy I have these strange and foreign pieces of him? I’m just supposed to freely put them on display for everyone to see? It didn’t make sense to me. That’s not my dad. His ashes aren’t even remotely how I want people to know him or be introduced to him. How is that comforting? How are these singed molecules supposed to make me feel better? It’s anything but heartwarming to me. I understand that it’s ‘something’ to keep. But it’s just not a keepsake I find reassuring.

So his ashes for the last 3 years have sat in the same bag they came to me in. They’ve sat in a cupboard by the bathroom, hidden from the rest of the world. I know they’re there. I know they still exist. But I don’t want to see them.

And in another turn of events, I also don’t want anything to happen to them. I want to know where they are at all times.

It’s like his ashes are both tormenting and consolatory.

I’ve spoken with therapists about this, but I think most people enjoy their ashes. At least in a way that they enjoy they have a piece of their loved one. It’s been hard for me to see them any differently than I do, or feel any differently about them than I do. I know people find comfort in their loved one’s ashes and I know people take a lot of pride in how they care for them. I’m just not there. I don’t know how to get there.

Do I want an urn? No. But then again, I don’t know. Do I? I don’t know the first step in looking for one. Is that something you can find on Etsy or Google, or do you have to walk into a funeral home to pick one out? Will I find it comforting by seeing it on my mantle? Or will I lock it away in my closet anyway, making the whole purchase pointless?

The idea of jewelry is nice. But that requires me opening the bag to fish some out. That alone makes me squirm in my seat thinking about it.

I have ideas for what I want to do with them, eventually. Once we finally buy a house, we will plant a tree in his memory and some of them will be planted with it. He also loved tropical vacations and spreading his ashes on a beach are in my plans down the road.

But for now, they just sit. In the saddest state possible, within a gallon sized Ziploc baggie, hidden away from the world’s eyes.

This isn’t what he would want. Even talking about this is so shameful. How can I love my father so much, yet treat his remains with such disrespect? How can I take pride in our relationship when I can’t even take care of what he is now?

I love my dad. But I hate his ashes.

I adopted my half-brother after our father died of pancreatic cancer, only 12 days after his mother died of a drug overdose. My father died 12 days after his wife did. His son, my half-brother Easton, came to live with me and my family. I have Easton’s share of our father’s ashes as well. Do I let him pick out an urn? Do I put that in his room? Do I wait until he’s old enough to understand? Or do I start this now so this is just a normal part of his understanding of his father’s death?

They’re just ashes. But they’re him…in unrecognizable fragments. I just wish I wasn’t so appalled by them.”

Read more from Molly about her late father:

‘I didn’t realize how much I would miss my dad’s handwriting. I didn’t know handwriting could be part of the grieving process. Mourning handwriting? But I did. I still do.’