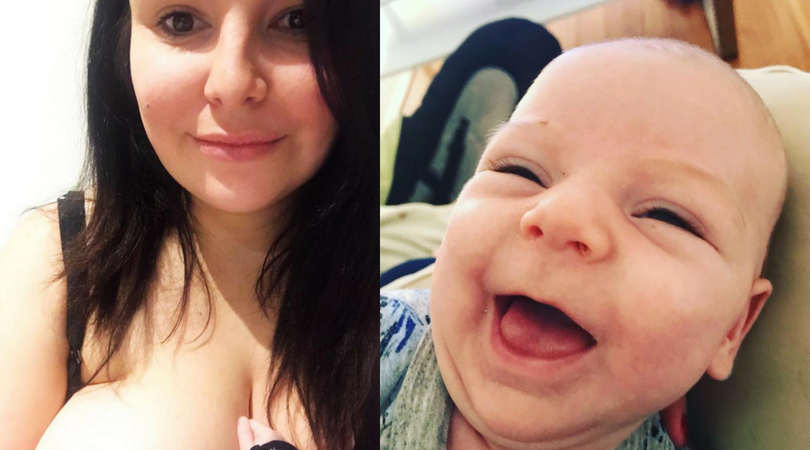 “You know, every day I read an article that’s promoted at how much breastmilk can do. It can do a lot… help with ear infections, eye infections, scars, be the milk to your partner’s coffee when you’re out (just kidding… or am I?)

I think everyone would agree that to be successful in breastfeeding, you need 100% support from everywhere. You need support, not bullying, but encouragement. You need someone to tell you that whichever way you want to feed, that you can do it.

But that hasn’t been the case for me. From the moment my children were all born, especially my last child, I am constantly told that I need to give them formula. ‘Top him up, he isn’t gaining enough.’ ‘Your milk isn’t in, we must use formula,’ nurse said while she shoved a bottle down my baby’s throat. ‘Maybe he isn’t sleeping because he isn’t getting enough?’ It’s EVERYWHERE. Nurses, midwifes, GP’s, even well-meaning in-laws telling you the baby is hungry, maybe your milk isn’t enough? People say breast milk is best, but they also want to let you know that what you’ve got isn’t the best.

So, what happens? You doubt yourself, you supplement, your baby slowly goes to the bottle and after much guilt and feelings of failure, you stop feeding. Then the same people who told you to top it off, will remind you of all the benefits of breast milk.

Uh, believe me this isn’t a formula vs. breast milk debate. This is a whinge on my part.

Because here I am, at the exact crossroad because I’ve been told constantly that my baby is hungry, even though he’s gaining weight, even though he has wet nappies… but it’s not enough. He’s not gaining enough, his nappies aren’t bursting at the seams, he sleeps longer with formula (yes, I know why he does, longer to digest etc.)

And this happens ALL the time, to so many of us. We want a happy baby, we want to try, but people tell us we aren’t doing it right. We stress, we supplement, sometimes our supply is genuinely not enough and we formula feed and then we are guilted in it because we are offering something that can’t cure infections and heal scars and that your partner will drink in his coffee.

I know, you’re sick to death of it, and I am too… if a baby is fed and happy, isn’t that enough?

But it’s not sometimes. It’s not when you have nasty looks from strangers because you’re shaking your bottle, it’s not because people are telling you you’re giving something to your baby that’s DEAD, because donor milk is hard to come by, because you miss having that close time and when your baby’s poo was mustard and smelled like sweet curried yogurt and not a jam sandwich.

So yes, breastfeeding is hard, formula feeding is hard and not having support either way is terrible. Its confidence crumbling, and guilt provoking, and it makes you doubt your ability as a mother. You can say to your friends, ‘But you’re doing such a good job.’ But you know exactly how it felt when you were in their shoes and it was hard.

Anyway, I guess my point is, if a mother is trying hard to breastfeed, encourage her, don’t tell her it isn’t enough or that all the problems she’s having of an unsettled baby etc. is all due to her milk because it’ll make her question herself if she’s doing the right job AS A MOTHER… and if she doesn’t want to breastfeed, then encourage her in that too, because you don’t know what made her get to that decision and in such a fragile time, we all just need SUPPORT.

So here I am trying, with my useless overly big bewbs. Just wanting the best, but so exhausted. Regretting writing this, but hoping it’ll help someone who feels exactly like me right now.”