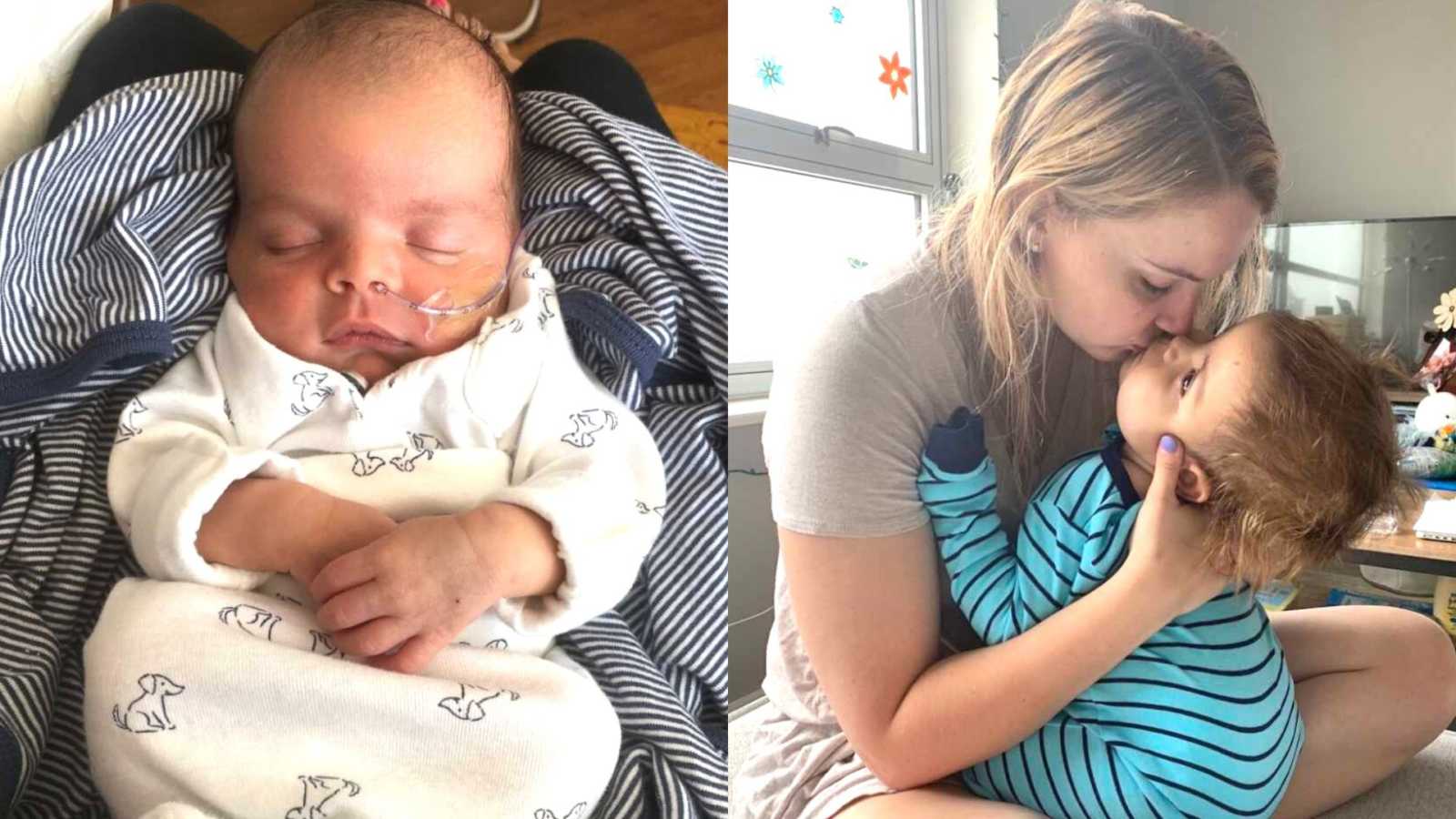 “‘I’m sorry, but there’s just nothing more we can do for him.’ The sentence paralyzed me. Sitting with my 18-month-old son, Asher, in a sterile room at Children’s WI, staring at one of his many doctors while she told me his progressive disease had run its course and the end was near, I felt my world shift. I packed up our things, signed his discharge paperwork, buckled him in the car, and drove my 25 minutes home in complete silence. I walked into my mom’s house, sat down with Asher on the couch, and didn’t say anything. What had started as a quick hospital stay to adjust his seizure medications after seeing new symptoms ended with ‘I’m sorry, but there’s nothing more we can do for him,’ and I was speechless.

This wasn’t the first time this baby boy had made my world shift. Our story started long before that horrible day in May. It even started long before I found out I was pregnant. Our story started when I was 16-years-old. After a year or so of horrible periods, I was diagnosed with a hormonal disease. In the stack of paperwork I received that day, only a few words stood out to me: ‘Could cause infertility.’ As someone who was raised in a giant family and a house that always had babies around, I wanted kids desperately. Even at 16, I was devastated this disease might prevent that from happening. As we cycled through different medications that never helped, my doctor started pointing out things like ‘there’s always adoption’ or ‘IVF is very successful for some people.’ I realized my vision of getting married, immediately getting pregnant, and going on to have a yard full of kids was probably not going to quite work out as expected. I felt my world shift.

Fast forward to February of 2017. After a few weeks of unexplained exhaustion, my partner and I found ourselves staring down at two pink lines. Again, I felt my world shift. I was 23 years old, stuck in an abusive relationship, working full time, and in grad school — not even close to ready to be a mom, but I was so elated. Asher was so wanted. I spent the next weeks making decisions. ‘Can I raise a baby with this man? Am I capable of raising him on my own? How do I get myself out of this dangerous living situation? I was raised with two loving parents, is it fair that Asher will not get the same? What do I do about school and my career?’ I was overwhelmed but determined to do whatever I had to do to give Asher the best possible life.

The next shift was a little more cataclysmic. It happened when I was 20-weeks pregnant, lying on the ultrasound table at my anatomy scan. It happened slowly, as the ultrasound tech went from happy and chatty to quiet and focused. I sensed the shift before the blow of, ‘I see some concerns and need to get a doctor’ was produced. The shift continued as the doctor explained the abnormalities she saw on my sweet baby boy led her to believe he had either Trisomy 13 or 18, both of which would result in him being non-compatible with life. I was counseled on termination and sent home to process the new world I lived in. One in which babies died and moms had to make impossible life-altering decisions. That week ended with my going forward with an amniocentesis, which to our surprise, showed no evidence of genetic disease and plunged us into the world of the unknown.

Asher Robert Hau made his quiet arrival into the world on September 19, 2017, at 12:54 p.m. He was silent and blue and was immediately whisked away to the NICU where he would begin the fight for his life. 24 hours later, he was diagnosed with neuronal migration disorder, agenesis of the corpus callosum, and hydrocephaly. All his diagnoses held a wide range of outcomes and I held on to hope he might have a typical life. I clung to the doctors’ uncertainty and convinced myself the low odds were wrong. Asher was a fighter and it might take some time, but he would overcome these diseases.

While I was filled with hope for Asher, I knew my relationship with his father had run its course and the first few days of NICU life made it abundantly clear it would just be Asher and I from here on out. Another shift, a needed shift: we would be doing this on our own.

When I first took Asher home from the hospital, his special needs seemed minimal. He had a feeding tube because he was slow to learn how to suck and swallow, but he was still progressing every day. His breathing had normalized and from what I knew about babies, things seemed pretty ‘normal.’ I hate that word now, what is ‘normal,’ anyway?

Just shy of turning 6 months, Asher’s health began to decline rapidly. He was losing weight, vomiting often, sleeping constantly, and just overall worrying everyone around him. He was admitted to the hospital and 3 weeks later, we left with a new diagnosis and the realization that Asher would not be on the normal end of the outcome spectrum. He would not lead a typical life and he would not overcome this disease. Asher had developed infantile spasms and generalized epilepsy. As he got older, his brain disease would continue to progress and continually take bigger and bigger tolls on the rest of his body. The next year of Asher’s life was touch-and-go.

Some weeks would be great, and some would be devastating. Asher would go on to be diagnosed with cortical visual impairment and hypotonia and his epilepsy would be classified as intractable. He would never learn to hold his head up or rollover. Doctors would cycle through medication after medication to control his epilepsy and while sometimes we would find relief, the seizures would always return. I would almost lose him to a common cold, which turned into a collapsed lung, and the summer of 2018 would be the summer of emergency brain surgery. Asher wouldn’t see, would rarely smile, and would stay trapped in the body of a newborn until the day I laid him to rest. He would eventually become reliant on supplemental oxygen and anyone left alone with him would have to be comfortable rescuing him from a seizure or resuscitating him when he stopped breathing. By all definitions, life was hard.

The next year of Asher’s life was also so beautiful. We would watch an entire army of people rally around this sweet boy and prayers for him would be said all around the world. I would launch a blog with his story and realize we had people Betting on Asher as far as Australia and in numbers that reached the thousands. Asher would prove doctors wrong continually and win the heart of every single person he met. His amazing therapists would teach us ways for Asher to interact with the world without seeing or sitting up and they would become an extension of our family. Asher would be outfitted with the most adorable glasses in the world to improve his eyesight and a sweet set of wheels so he could move around more easily. He
would meet Mickey Mouse and Olaf.

I would graduate from grad school and get an incredible new job. He would learn to eat solids and drink out of a bottle. Asher would teach me that we never needed his biological father to help us and would share his strength with me to get through 20+ hospital stays. I would tell his story on the internet and at speaking events and I would watch the world be impacted by this little boy’s BIG life. We would endure it all, together.

The beginning of 2019 would bring a progression of symptoms and in May I would bring Asher into the hospital and tell his neurologist he was presenting with a new type of seizure where he stopped breathing altogether. His neuro team would tell us this wasn’t a seizure and his pulmonologist would tell us that this was his body’s way of saying, ‘This is too much. I can’t fight anymore.’

Together, his team would say, ‘I’m sorry, but there’s nothing more we can do for him,’ and I would walk out of those hospital doors for the very last time. I would take my baby home to die. Hospice would give us the most peaceful few weeks of our life. We would sit outside, go on walks, cuddle on the couch with my entire family, and eat all our favorite things including ice cream. We would sing and pray and say goodbye. Asher died in my arms, surrounded by my family, in my parent’s home on July 1, 2019, at 4:06 p.m., and the shift in my life this time was obvious. It was noticeable to not only me but everyone around me.

It’s been nearly a year since my son left his earthly life and I still haven’t quite accepted this new stage in my own life. When I finally sought out professional help a few months after Asher’s death, I was diagnosed with depression as well as post-traumatic stress disorder. Fortunately, I was able to find an anti-depressant that worked for me and regular therapy has helped me care for my mental health. I have learned to lean on my support system and nearly 3 years after ending my relationship with an abusive man, I am in a loving, healthy relationship with someone who has been a close friend, someone who loved my son, and supports me in my never-ending grief journey.

People ask all the time, ‘How do you do it?’ and my answer is always honest. Firstly, I wasn’t given a choice. Secondly, I have no idea. I make it up daily. It is always changing. Some things that work one day don’t work the next and that’s okay. Grief and healing are difficult and messy and unfortunately, you don’t just wake up and feel better one day.

There is only one constant, and that is Asher. His memory and his goodness always remain. They are the only thing that get me through every day. Asher is no longer here with me physically, but he left me with so much. I feel him everywhere. I see him in every chubby-cheeked smile of passing children. I envision him giggling, running around and playing, pain-free, and cured in a place that is kinder to him in a way this world never was and though I am brokenhearted that he is not with me, I am at peace.”

This story was submitted to Love What Matters by Kelsey Hau. You can follow their journey on Instagram. Do you have a similar experience? We’d like to hear your important journey. Submit your own story here. Be sure to subscribe to our free email newsletter for our best stories, and YouTube for our best videos.

‘My sweet boy, oh how I wish we could bring you home. I cannot fathom why you were too sweet for this world, and meant only for heaven. I yearn for the day to hold you again.’