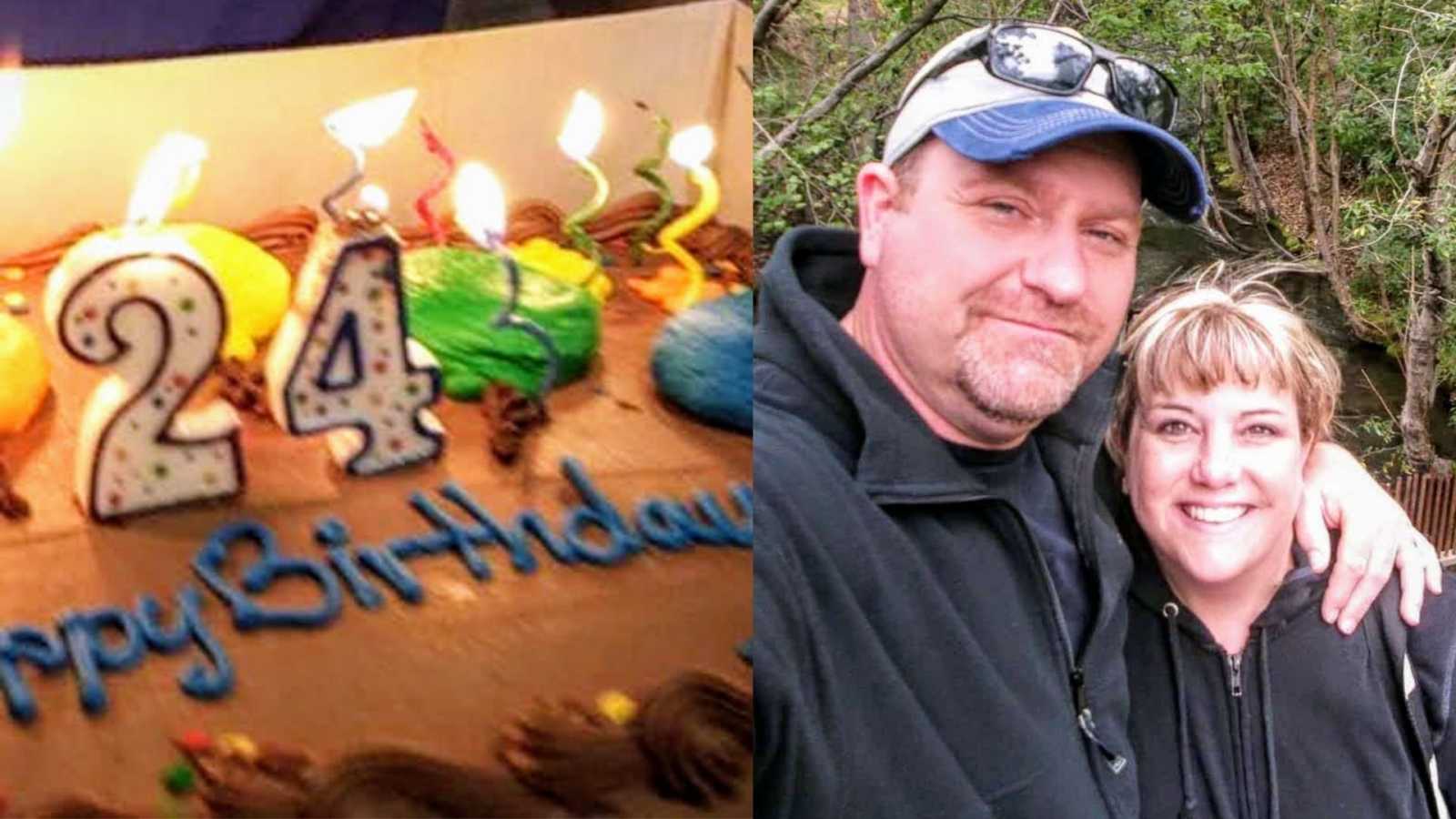 “My mom once said, ‘Every year at the end of the night on your birthday, you cried.’ When the party was over, the cake was cut and the friends had gone home, I would just sit and cry.

I guess looking forward to something so much and having it end was just too much for my little 8-year-old heart to bear. I think that feeling stopped right around the time I turned 15 and almost got myself, and all my friends, arrested.

Apparently, when your dad tells you, ‘Do not leave this house,’ in the middle of the night during a slumber party, and you improvise and TP your own house, the cops still get called. Hey, we didn’t technically ‘leave,’ so there’s that.

The first birthday I spent with my husband, I turned 16. I remember where we went and what I was wearing. We went to Farrell’s Ice Cream Parlor. I kept my hair straight, and I wore a multicolored, oversized sweater over a white turtleneck and a white mini-skirt. I remember this because it was one of the first times he really held my hand. I mean, the entire summer before he would hold my hand here and there, but it wasn’t until this night that he held my hand the entire time we ordered, all the way up until the sundaes arrived.

There was something magical about it. It was fall. We were coming out of a hot summer, and the night air was cool, but still pushed around warm pockets as you walked. We were all back in school, but my birthday was like a holiday anyway. And there was nobody else I wanted to spend it with than Chad Register.

The last birthday I would spend with him would be my 43rd. I don’t think we did anything. I’m sure he worked, as he was trying to not use any time off for anything but doctor’s appointments and chemotherapy. He was nine months into his cancer diagnosis by then, and our priorities had changed. He was probably secretly happy he didn’t have to host a party after the one he threw on my 40th. I don’t think he had expected a hundred people to show up and spill out into the driveway, or ride around scooter-coolers in the street, or kids running amuck.

That party was the start of our non-stop argument over whether the garage could be open during a party ever again. He didn’t want to bother the neighbors with the noise, but what he forgot was all the neighbors were there with us. The same group of friends was always there. The summer was full of BBQs and singing into fake microphones, hustled games of pool, and poker under the stars. My birthday was the last hoorah until the next summer came around, and even though he protested, I think he liked the big end of summer party.

After all, he bought the food. And the cake. And reversed the candles to make me 24 instead of 42 and told jokes and played the role of the DJ. Yes, come to think of it, I think he liked it.

He was 44 on my last birthday, but he would turn 45 just four months later. I loved it when he had a birthday. I loved spoiling him and celebrating with him. But mostly, I loved the fact that I could tell people he was two years older than me and not just a year and a few months. It was a joke we tossed around all the time. I was excited he would hit 50 before me.

But now, now – I am older than he was when he died, and there is nothing more unnatural than that. He was always supposed to be older than me, yet now he is suspended forever in time at 45. I don’t want to be older than him. It’s not the way it’s supposed to be. I don’t want to have any more birthdays. I just don’t. But, I don’t know what I am supposed to do because those birthdays keep coming. I am thankful for them, don’t get me wrong. It just feels so out of place. He never got the chance to be 48. It’s just weird. He’s not going to be 50, either.

I hate the term ‘new normal.’ I really do. For some reason, it just gets right under my skin. I guess mostly because there is nothing normal about this. But, is it a new reality? Yes. Yes, it is.

So, I will blow out candles on the little cake I share with my kids and I will tell them the same thing I do every year when they ask me what I want, which incidentally is a clean house, and I will smile and thank them and go about the day.

And at some point, I will walk outside and pause. I will close my eyes. I will breathe the fall air in until it rattles my lungs. I will hold it and allow my mind to be flooded with memories. I will see him singing happy birthday. I will see him smiling and laughing and patting his friends on the back. I will see him manning the BBQ and cleaning off the patio. I will see him setting up the pool table and throwing a practice dart.

I will see him creating a playlist and checking the speakers on the walls. I will see him in the kitchen with his little girl trying to wrap a present or help her make a card. I will see him standing in the driveway talking to people, and he will look over at me and wink.

And that, friends, will be the greatest birthday gift of them all.”