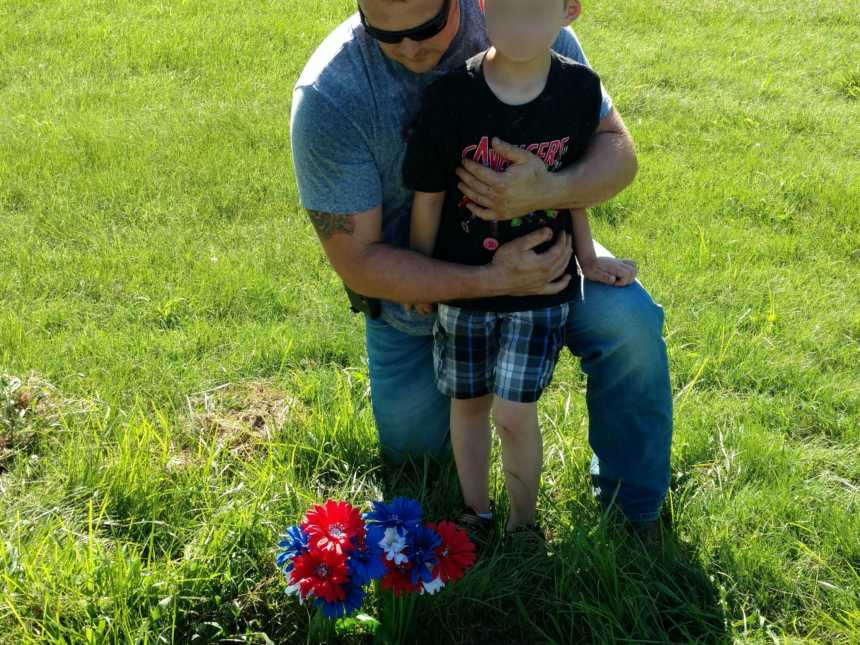 “There are so many emotions in this picture, exhaustion, relief, sadness, and love. When my fiancé and I were getting to know each other 6.5 years ago, he told me he was adopted and that his biological father had passed away when he was 10. He has always told me stories about how wonderful his dad was and how much he misses him.

Over time, he opened up more and told me about how his mother had left and he had lived with a family member for a few years before being adopted by another family across the state from where he grew up, and eventually he joined the military. About 5 years ago, he told me he didn’t remember where his dad was buried. He said he knew it was in Cincinnati, but he had no idea where. He wanted to introduce me and our son to the man who gave him the best memories he has of his childhood.

Immediately, I began searching. I have searched for my fiance’s dad’s grave for nearly 5 of the 6.5 years we have been together. Finally, with absolutely no help from his biological family and after many phone calls to different cemeteries in Cincinnati and internet searches, a 2 hour drive, and over an hour of searching the cemetery, we finally found it right when we were about to give up.

We searched the cemetery for half an hour without any luck, even though we had the location of the grave, when an angel showed up, or at least that’s what I consider him. He was an employee who was there to tell us that they were locking the gates. We were so exhausted and drained, so I told him we had driven 2 hours and couldn’t find the grave we were looking for. This young man worked late that day to help us look.

We were becoming heartbroken and defeated. After another half an hour of looking, just as we were about to give up, he wiped off one more grave and there it was! Twenty-two years after his death, my fiancé finally got to ‘see’ his dad again. And he got to introduce our son and myself to him. It was a day he has always dreamed of – we have always dreamed of.

The young man who helped us look is going to have the stone raised and cleaned so that we will be able to find it easier on our next visit.

I will cherish this picture forever. I love this man so incredibly much and I’m so thankful for the path his life took, although rough, that lead him to me and lead us to having our son.”

This story was submitted to Love What Matters by a family who wishes to remain anonymous. Submit your own story here, and subscribe to our best stories in our free newsletter here.