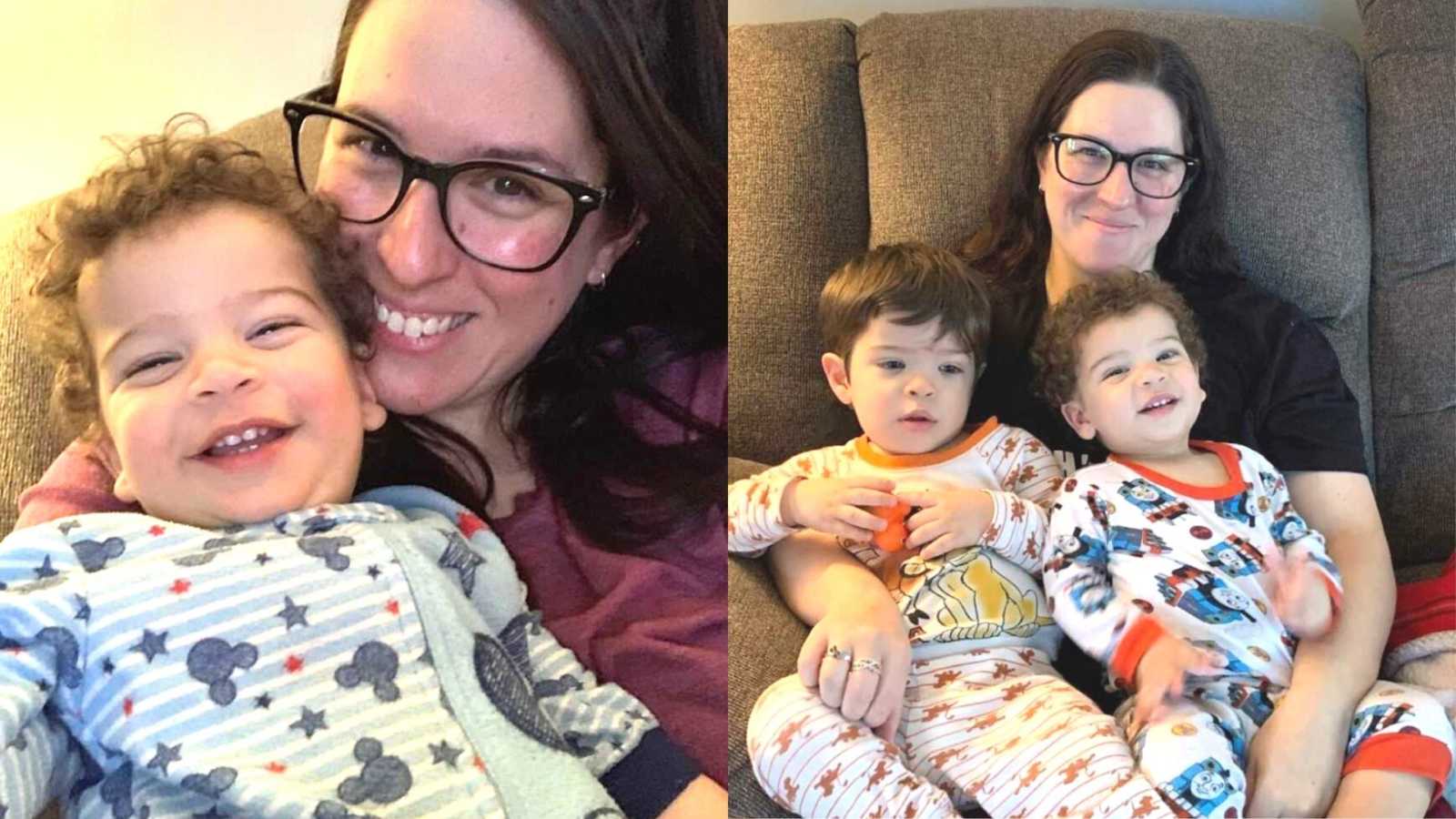 “This was supposed to be the happiest time of my life. Becoming a mother is all I have ever wanted, yet I was stripped of the joy you are supposed to feel. ‘No, you just have the baby blues,’ was what I was told when I hysterically called my OB’s office at 2 weeks postpartum. I had summoned up the courage to finally call and ask for help. I got pushed aside and put in the same basket as everyone else.

I called through tears and said, ‘I think I have postpartum depression,’ which is hard enough to admit as it is. The receptionist transferred my phone call to the intake nurse, where she proceeded to ask a bunch of standard questions to ascertain if I was a risk to myself or others.

I distinctly remember her asking if I was having thoughts of harming myself and or others. Too ashamed to admit I actually was having thoughts of harming myself, I quietly said no. She then proceeded to tell me it was NOT postpartum depression because I wasn’t suicidal. She told me I should try to calm down as much as I could because the stress can pass into my breastmilk and upset my two-week-old baby’s stomach. As if I wasn’t feeling guilty enough. She told me to run out to the store and buy essential oils.

Feeling so incredibly misunderstood and dismissed, I just said okay. She told me if I was feeling like this again to call and she’d ‘talk me off the ledge.’

I hung up the phone and couldn’t breathe from crying so much. I felt like I was talking and everyone around me was deaf. I said to my husband, ‘This is why we lose SO MANY women during the postpartum period.’ We find the courage to come forward and ask for help and we get ignored.

Thankfully, I didn’t give up. I called for the next five days. My husband even called on my behalf until I got an appointment to see my doctor. I went to see him with my husband and two babies and not surprisingly, I was diagnosed with severe postpartum depression.

You see, this wasn’t my first rodeo. I had an older son born in January 2018. I got pregnant at 7 months postpartum, and my babies are 16 months apart.

I knew this wasn’t just the baby blues because I had suffered from that when I had my first and it lasted only 2 weeks. However, being more educated now, I definitely am now aware I did suffer from undiagnosed postpartum anxiety after my oldest was born. I put it down to being a first-time mother and being on the neurotic side but now I know better. I had all these terrifying intrusive thoughts of what could happen to him and I never really let anyone hold him. The only time I left him was when I had my second son.

My anxiety became so bad I then developed obsessive-compulsive disorder, which meant I had to do and say the same things to him at night more specifically or I feared the worst would happen. I only allowed him to wear the same PJs because I was petrified of SIDS. I found myself googling every little thing I noticed he did, it became an obsession.

I loved being a mother so much. It was all I ever wanted and I am also a stay at home mother. But I just wished I was more relaxed, nonetheless, I accepted this was how I would mother.

Fast forward to September 2018, I found out I was 4 weeks pregnant. I have never felt so terrified in all my life. I felt every single emotion you could think of. I remember saying to myself, ‘Okay, you have 9 whole months to adjust. Come May, you’ll be ready.’

Well, to my shock, in March 2019 when I was roughly 30 weeks pregnant, I began feeling emotions I NEVER have felt in my whole life. I put it down to being overwhelmed with looking after a clingy toddler, a shift-working husband, and being a stay at home mom, which means no break. However, the pivotal moment for me was when I was home with my toddler, heavily pregnant, holding my son. I got up because my dog wouldn’t stop barking and it triggered something I have never experienced: intense rage.

I was so mad I smashed the window of our door while holding my son. I immediately called my husband and told him. I was so ashamed to admit the truth. I knew right then and there, something wasn’t right with me.

I went to my OB at my 30-week appointment and told him I thought I was suffering from depression. He told me to have the baby first and see how I went. Those last 10 weeks were hell. I cried every single day. I resented the baby growing inside of me. I wanted to leave him at the hospital. I didn’t want him, it was seen as a chore rather than an exciting addition to our family. I was too afraid to talk about it and I was even afraid to tell my husband because I was so incredibly ashamed for my thoughts.

I was petrified if anyone were to catch on to my thoughts, I’d get my babies taken away from me. I knew I wasn’t crazy but what I was thinking was crazy. Fast forward to May 2019, I delivered a healthy baby boy but that’s when it got worse. Suicidal thoughts convinced me that my family would be better off without me. I felt like an incredible burden to my husband and I just knew my innocent babies deserved a better mom than myself. I couldn’t be who they wanted me to be. Once I started to realize how terrifying these thoughts were AND how unlike me they were, I KNEW I desperately needed help.

After I was diagnosed with postpartum depression I went on Zoloft and into therapy. After 4 months of therapy and Zoloft, I realized I had seen absolutely NO improvement. I decided to take myself out of therapy and focus on finding a therapist or place that specialized in postpartum mood disorders. Easier said than done. I ran into issues with my insurance not covering these places and also these places not accepting my insurance. I would have to pay out of pocket, which as a single income family with two children, it’s almost impossible to do that.

I became very close to an advocacy group. They advocated for me every day until I finally found a postpartum psychologist. Before finding my current therapist, it took MONTHS AND MONTHS to be seen, which meant my postpartum depression had an opportunity to manifest.

Fast forward to 15 months since being diagnosed and I am still in therapy once a week and on a different antidepressant. I have since realized postpartum depression is a byproduct of childhood trauma and an incredibly abusive previous marriage. I am currently working through all my trauma and using my new skills to becoming a better mom.

I have also launched a podcast called Mothering Through Postpartum Depression to be of support to a newly diagnosed mom or a mom currently living with PPD. There is no need to suffer in silence anymore.”

This story was submitted to Love What Matters by Yasmin Regan from New York. You can follow their journey on their podcast. Do you have a similar experience? We’d like to hear your important journey. Submit your own story here. Be sure to subscribe to our free email newsletter for our best stories, and YouTube for our best videos.

‘I never thought it would come to this. My beloved grandma died when I was 22 weeks pregnant. ‘I don’t feel happy at all.’: Woman with postpartum depression says ‘admitting something is wrong was the first step’

‘This is easy, just wait until they’re older.’ I cried into her bib. I struggled to say ‘I love you’ to my baby. I shut down completely.’: Mom suffers postpartum depression, fights for help, ‘Every day is a battle, but I know I can win’ 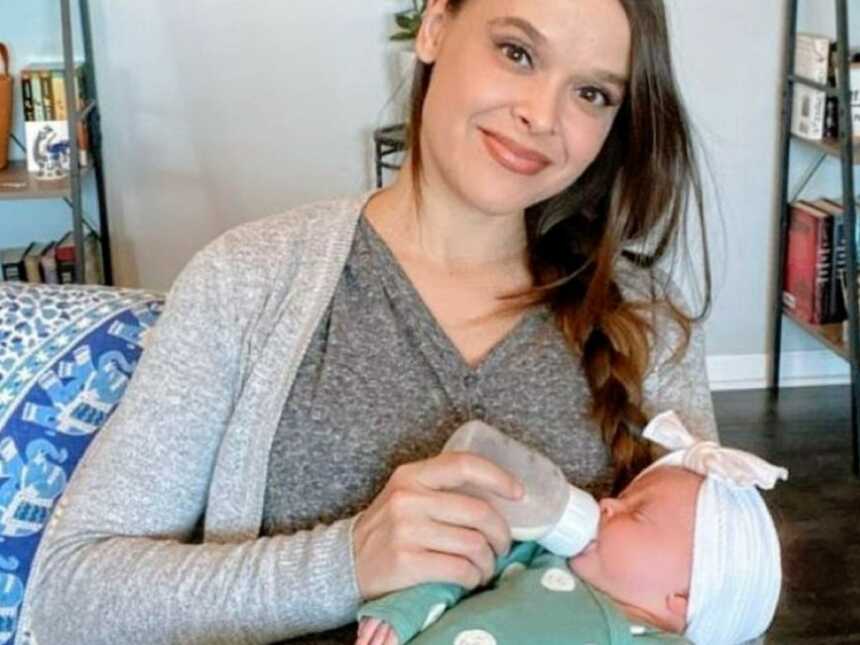 ‘Even if you’re able to successfully, breastfeeding is NOT free.’: Mom reacts to formula shortage

“In one month, I can’t tell you how much I spent on nursing bras, pumping bras, bra pads, lactation powder, creams, cooling/soothing pads, and pump accessories parts.”