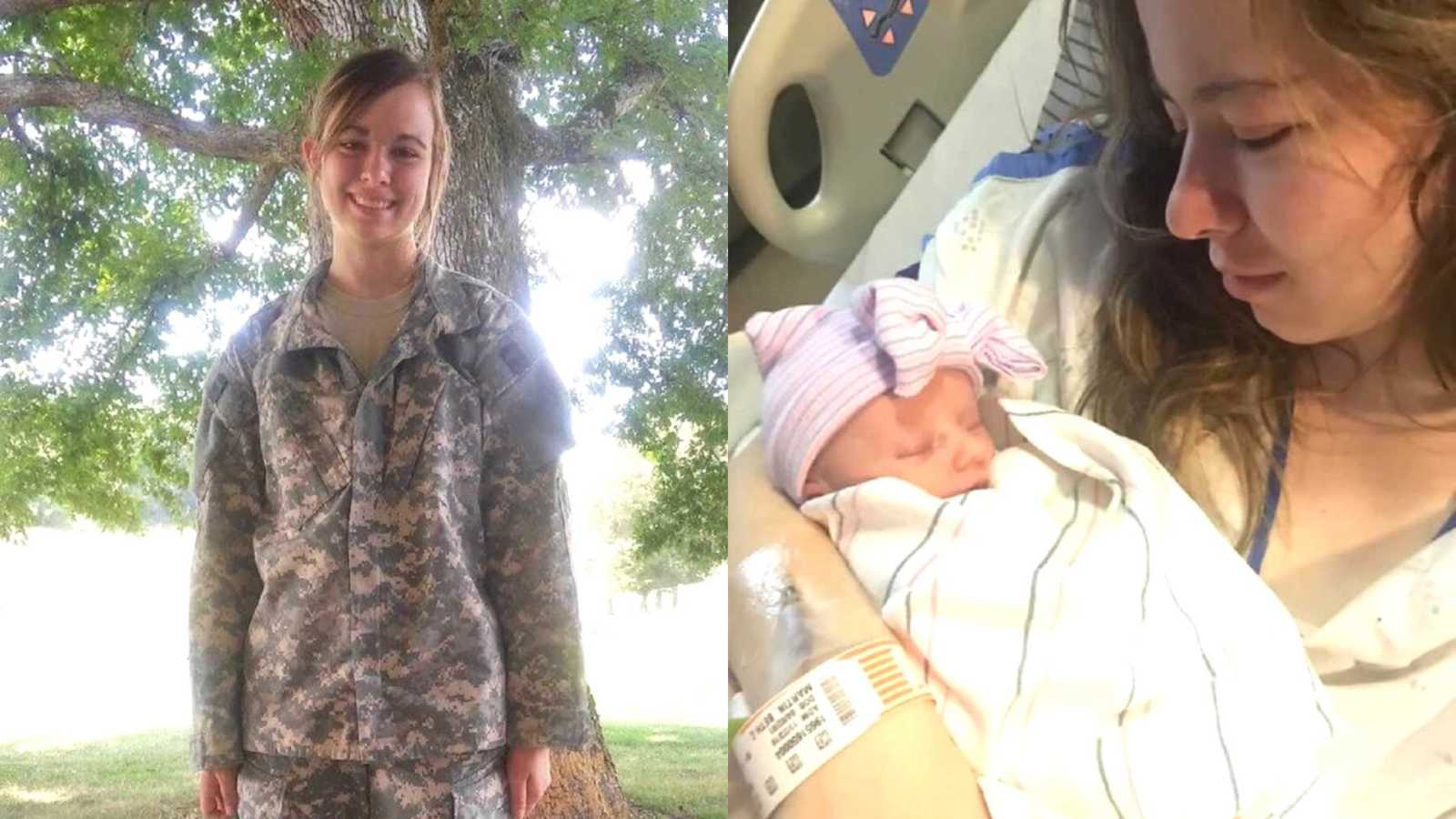 “It was three days after my eighteenth birthday, I stood in my bathroom screaming in horror at the home pregnancy test which had two, dark bold lines indicating my worst possible fear. I was pregnant. I had been sick for weeks, throwing up constantly and no food would stay down. It never occurred to me that I could possibly be pregnant until my mom asked.

‘I can’t be pregnant! I can’t be! I’ll get an abortion, I have to! I’m leaving for the Army in three months!’ I screamed these things over and over as my mom shouted back with tears in her eyes. Of all the stunts I had pulled in my teenage years, this one was by far the worst and most life changing.

‘You cannot have an abortion. You just can’t.’ That’s all I could hear my mother saying. I remember my mind was like mush. All I could think was how my life was ruined. I couldn’t go to the Army pregnant. And I definitely could not be pregnant at 18 years old.

I grabbed my phone, my wallet and a few other things, threw them in a backpack and called a good friend of mine. She picked up on the second ring. I was sobbing as I told her what had happened. She didn’t hesitate or question me – she immediately came to pick me up from home. By the time I went back home I felt so lost. I didn’t know how to feel or what to do. What was even worse… I didn’t know if the baby was my boyfriend’s or if I had gotten pregnant by a guy I had a fling with in school. I told both potential fathers, but I hadn’t told my boyfriend there was a chance the baby wasn’t his. I was so utterly ashamed I could hardly look my boyfriend in the eyes.

Eventually my mom made me an appointment with the OBGYN. She later told me she made the appointment in hopes that it would stop me from getting an abortion. It worked. I went to the OB’s office, had an ultrasound and heard my baby’s heartbeat for the first time.

‘Congratulations! You’re about seven weeks pregnant and if you look right there, that’s your little nugget.’ The beaming woman doing my ultrasound must have known how old I was. I was obviously a teenager.

I sat in the chair, crying and staring at the screen with this tiny little nugget of a baby and I knew that I couldn’t have an abortion. This baby’s heart was beating, it was alive and I couldn’t end that life.

Going through my last few months of high school pregnant was not easy. People began noticing how sick I was every day and how my demeanor had changed. I was much more withdrawn, quieter, I didn’t want to be in the center of attention. They noticed how I was suddenly at odds with a guy who I used to be so close with. I still had no clue who my baby’s father was, but I knew there was a chance it was him and it was putting a strain on our friendship. Things were changing. I lost my military contract because they couldn’t ship a pregnant girl to basic. My parents and I were at odds because I was determined I would somehow keep my baby. Even though I knew I couldn’t give her what she needed, I wanted to try.

Eventually the truth came out to my parents. I had no idea who her father was. I knew it was one of two people, I just had no idea which. My mom took me to do a DNA test and I prayed to God that this baby was my boyfriend’s. Then we could raise her together and everything would be uncomplicated and okay.

It wasn’t uncomplicated and okay. My daughter wasn’t his, and he needed to know the truth. I avoided it for months. I was terrified he would leave me, I knew he would be right if he did but I didn’t want to lose him. I finally called him one night after the DNA results came back and told him everything.

‘Beth, I forgive you.’ I can’t remember much from the conversation that night, I was hysterical and sobbing but I remember those words. He never raised his voice or got angry. He was quietly hurt but willing to forgive.

After coming to terms with everything I had done wrong and owning up to my infidelity, I began to search for an adoptive family for my daughter. I knew I couldn’t give her the things she needed and I knew that her father definitely couldn’t. I realized that I loved my daughter too much to keep her. She deserved better. I confided in a close friend about my pregnancy, an older woman who had kept me in the nursery at my church. She was disappointed in my choices and gave me a gentle scolding before telling me something that gave me some hope.

‘If you really are interested in adoption, I may know someone who is looking to adopt. Would you mind me telling her your situation?’ I was a bit taken aback but I agreed that if she trusted the people I would at least meet and talk with them. My daughter’s father wasn’t thrilled, he wanted to keep her and raise her together but I had no interest in pursuing a relationship like that with him. I knew we couldn’t have done it. We were both too young, and too immature.

I ended up meeting with two prospective adoptive families, one being a young successful surgeon and her steady boyfriend, the other being the daughter of my church friend and her husband. We ended up choosing the Maples, my church friend’s daughter and her husband. They were so kind to me despite my situation, they were stable and desired a large family but had no luck getting pregnant. They just felt right to me. They wanted everything I wanted in adoption, they wanted to keep it open, they wanted my daughter to know me and her father. Everyone liked them, even my daughter’s father admitted they were a very nice couple. The Maples began coming to my doctor’s appointments, they began talking to me, not just as a birth mother, but as a friend. We developed a beautiful friendship. They even invited me and my boyfriend, now fiance, out on a double date. I don’t just see them as my daughter’s adoptive parents, they’re my friends, an extension of my family.

When it came time for my daughter to be born, they were at the hospital. My mom stayed in the delivery room with me while the adoptive parents, the baby’s father and our families stayed in the hospital waiting room. I was so emotional the entire time I labored. I was about to meet the child who I had loved, cherished, sang to, talked to and nourished for nine months. Even though the adoption was going to be open it was hard to imagine not having my baby with me. After 16 hours of labor we welcomed my daughter, Ruth Apphia Maples, into the world. I remember holding her after the nurses cleaned her up and thinking about how tiny and perfect she was. I was so proud of this beautiful little baby. Her adoptive family burst into tears when they saw her. They looked at her with so much love and so much adoration that I knew I had made the right choice. They were going to love this baby with everything they had in them. It was the hardest decision I have ever made but I’ve seen so many blessings from it. I gained wonderful new friends in my daughter’s adoptive parents, my fiancé and I have a stronger, better relationship, I would have never been this close with my parents if not for my pregnancy.

Although the road ahead of me isn’t easy, I hope another young, scared mother sees this and knows there can be hope in a dark time. Adoption isn’t the easiest decision for the birth parents but in the end it wasn’t about what was easy for me, it was about what was best for my daughter. I will always be a part of her life which is why now, I strongly speak for open adoption. It is a wonderful, beautiful blending of families. It is a blessing that comes through trials.”

This story was submitted to Love What Matters by Beth Martin of Corryton, Tennessee. You can follow her journey on Instagram. Do you have a similar experience? We’d like to hear your important journey. Submit your own story here. Be sure to subscribe to our free email newsletter for our best stories, and YouTube for our best videos.

‘We broke up. Everything was perfect. Until I missed my period. I was pregnant. There was one mountain to climb: Tell my parents.’: Teen mom knows adoptive parents are ‘the one’ as soon as they ‘walked in the door’

‘I’m sitting on my bed, in my teenage bedroom, at my mother’s house. It’s 3 days after I found out I got knocked up by the first guy I ever met from Tinder.’

‘I found out I was pregnant one month after I turned 19 years old. ‘The second line is faint. You’re very early in your pregnancy,’ the nurse said. I had not even missed a period yet. Utterly shocked.’

‘My heart fluttered as we walked up. I chased him down and pulled him away from his mother. I cried for days.’: Foster mom addresses trauma, tantrums, ‘It’s the best thing I’ve ever done’

“They’d never had a bed or a bedtime, had never seen a vegetable or a toothbrush, and weren’t potty trained. ‘This will be worth it.’”

“Her birth parents wanted to spend time with her. I wasn’t sure if I would see her again. All I could do was pray.’: Mom describes emotional adoption, ‘She is our greatest joy’ 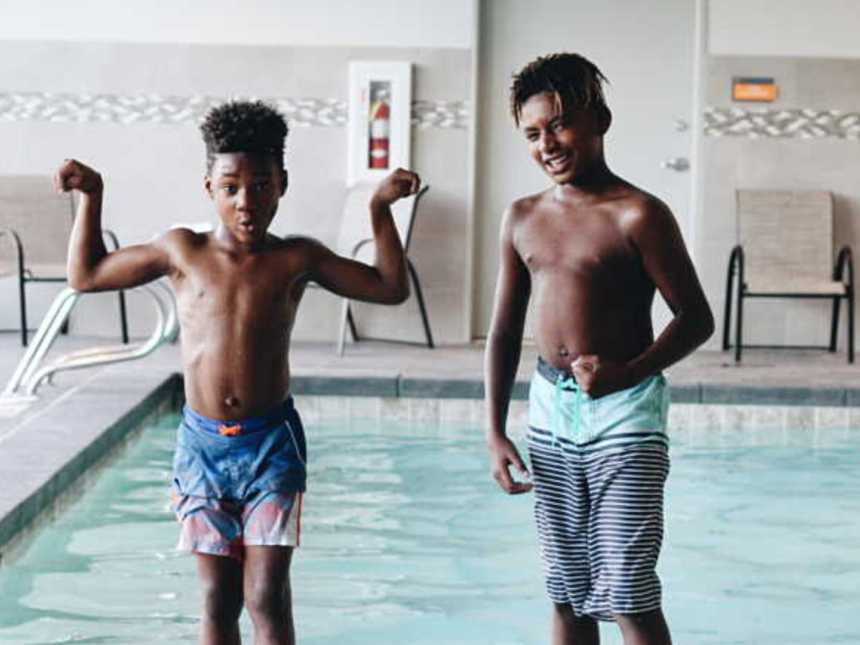 ‘Eli and his biological brother who went to another family have lived 45 minutes from each other for their entire lives, and have never met. Until now.’: Adoptive parent’s son reunites with brother decade later

“Her biggest fear was that she would regret this decision for the rest of her life. We never heard from her again. 10 years later, we received a message.”

“I watched as the man in front of me asked the cashier to put things to the side. Over and over again. He kept swiping his card. Declined. He was just buying the bare minimum. There was a girl and boy with him. I could see the embarrassment written all over their faces. Then suddenly, I started to open my mouth.”