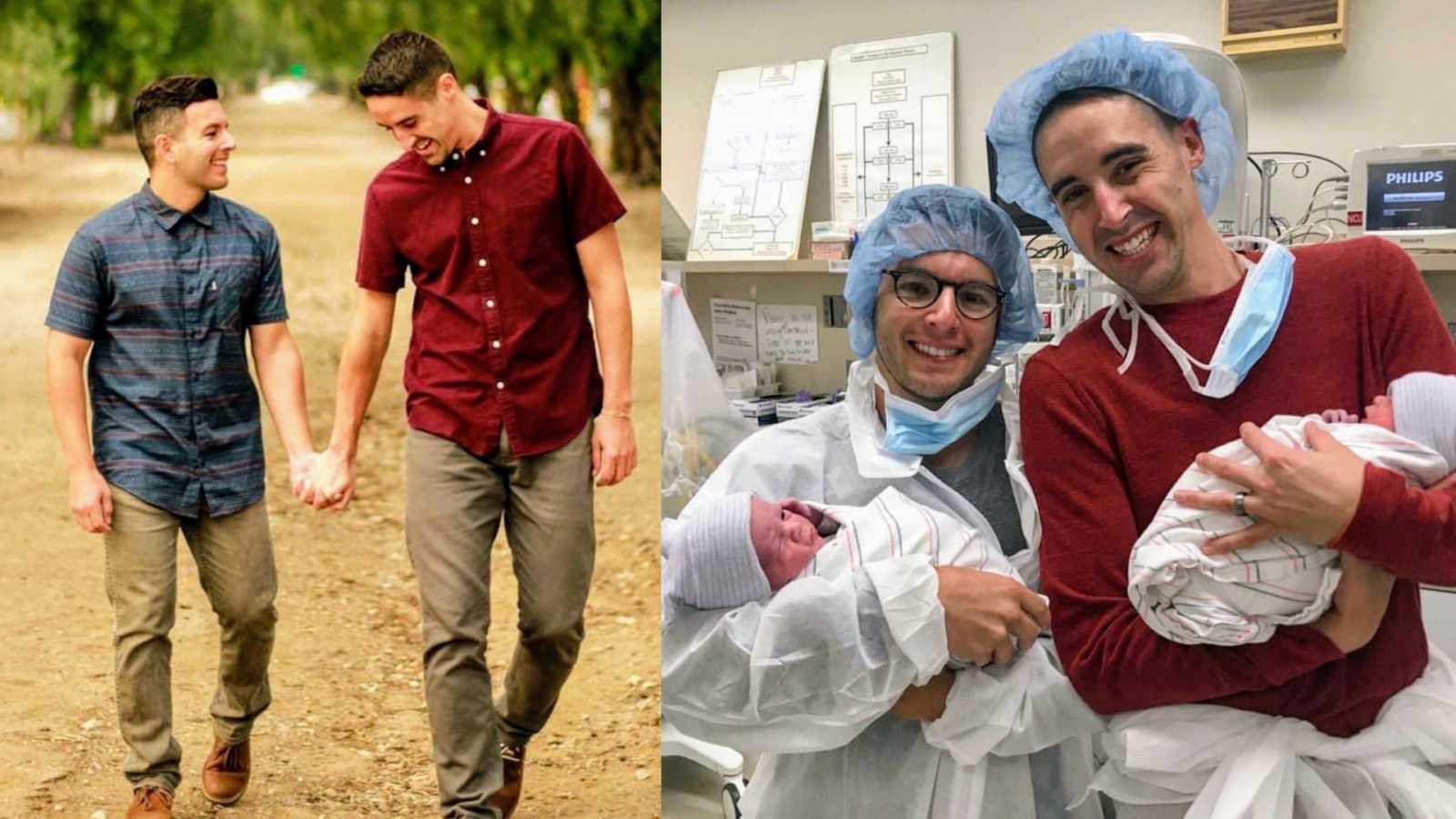 “About 30 years ago Nick and I were both born into incredible families on opposite sides of the United States.  Growing up was pretty similar for both of us. We both went through all the emotions as we journeyed through the coming out process. The most difficult part was trying to decide if it was best to continue along with the norms society puts in place and raise a family in our respective hometowns or live our true identity, thus sacrificing the idea of having children of our own. After much turmoil and self guilt both of us decided to move to the Big Apple and explore life as gay men.

New York City is home to such vibrant culture where all are accepted and loved.  Through our respective journeys Nick and I found the New York City Gay Basketball League that just so happened to combine two of the things that made us who we were, being gay and enjoying the sport of basketball. During a Saturday afternoon open play hosted by the league I walked into an old gym expecting to play some basketball and get a good workout in at the same time. I was quiet, serious, and a bit reserved. I was focused on basketball and shooting as many threes as possible.  Never in my career as an athlete has someone or something broken that focus like Nicholas did that day in the old gym in the heart of New York City. His smile, his energy, and his overall happiness stopped me dead in my tracks.  Even though he was much shorter he decided to guard me that day. We battled back and forth for the next few hours. For Nicholas he was having innocent fun however, for me it was much more. I knew in that moment I wanted to be with him for the rest of my life. Since that day I have been chasing him nonstop.

Over the next few months we talked and enjoyed each others company however, Nick was not available to date. As respectful as he could be told me he could no longer see me because his feelings had grown from friendship to much more. My heart was smashed. Trying desperately to respect his feelings I was able to stay away from Nick for about 12 hours. Unable to sleep for fear of losing the love of my life I texted, ‘Please let me see you one more time.’  Luckily, Nick decided to grant me my wish. Like a true romantic comedy we met in Central Park.  Through tears Nick expressed his true feelings for me and I reassured him my values and intentions. At the core of those values was getting married and raising a family with someone. In that moment I told him if you want me to go away just tell me to go and I will. Thankfully eight years later he has never told me to go away and we are now husbands!

One specific conversation we had early on in our relationship was the dream of raising children of our own one day. At this time gay marriage was not even legal however with both of us coming from such strong families we were connected by this idea of wanting a family to call our own. We enjoyed life and love in New York City for the next five years before exploring the process of turning our partnership of two into a family of three. We made the jump to California to be closer to Nick’s family. We both landed incredible jobs and purchased our home we live in today. After getting married in our backyard with one hundred of our closest family and friends we began to explore adoption possibilities. After meetings, conversations, and a lot of research we signed with Adopt Help. Their primary goal was to connect a birth mother with adoptive families.

Early in the process we found ourselves to be frustrated at the amount of hoops we had to jump through. Online classes, home study visits, CPR training classes, physical examinations, vehicle expectations, and live scan verifications began to really add up emotionally and financially. We continued to remain positive and knew each minute sitting in a training and each dollar spent on a bill was going to pay off in the end.  And 10 months of patiently and sometimes not so patiently waiting our efforts paid off.

Normally my phone is always on silent however on a special September day my phone just happened to be on and Nick and I just happened to be home early from work. Our caseworker from Adopt Help asked me if Nick and I were together and I said yes. She said, ‘A birthmother has selected you as her top choice.’ Instantly our eyes filled with tears. Then our caseworker asked if we were sitting down and through our tears of joy we said yes we are.  Nervously we asked what was going on and we were told ‘the potential birth mother is having twins.’  Our tears of joy were now replaced with a look of complete shock. Finally, to put the icing on the cake we were informed the potential birth mother was having one boy and one girl. Life was good.

Due to the birth mother’s decision to bring us in at an early enough stage we had the pleasure of joining her on doctors visits, watching ultrasounds and listening to our twins hearts beat, and even had the opportunity to be in the delivery room, well kind of…

The twins were born at Loma Linda University Hospital in Loma Linda, California. They are a learning hospital and were very welcoming to us. Despite their kindness rules are rules and only one person was able to be in the delivery room at a time. They were kind enough to let us both get scrubbed in and decided to let us switch out halfway through the delivery since there were two babies. We decided I would go in first and then Nick would switch halfway through. Our birth mother was delivering via c-section. After about 15 minutes the doctors began to announce our baby girl Nora into the world. She was very quiet. When the doctors continued to say, ‘Come on give us a cry, give us a cry’ it makes you a little worried. Our baby girl pulled through and let out a quiet cry followed quickly by a roaring scream. The scream was not from Nora but it was our baby boy, Smith who had just entered the world.  I was in complete shock, smiling from ear to ear. One of the kind nurses tapped me on the shoulder and asked if I wanted to switch with my husband. ‘Sure,’ I said, almost forgetting I just witnessed BOTH births! They brought Nick into the delivery room as I exited. We smiled at each other but did not have the chance to even talk. They took Nick into the delivery room while I was led down a long hallway to the recovery unit. Walking into the recovery unit the nurses meet me at the door to tell me we have two healthy babies. I instantly begin crying, but quickly said, ‘Can someone please get the other dad!’  A nurse says, ‘Sure, where is he?’  ‘Waiting in the delivery room,’ was my response.  A long two minutes later Nick rushed into the recovery unit with the most happy, surprised, and confused look. He shouted, ‘They are BOTH here?’ We look back on this moment and laugh all the time. Nick was in the delivery room waiting for twin number two to arrive, meanwhile both had already been delivered.

Four difficult but extremely worth it months later we are home with our beautiful and healthy twins. Our entire journey has been completely worth it. Growing up as gay men you begin to slowly faze out the possibility of having a family however, the conversation we had early in our relationship highlighted both of our determination to have a home filled with children and love. Now at least once a week we look at each other and say, ‘I can’t believe we have two!!! How did this happen?!’ Haha, but we are loving every minute!

Thankfully Nick decided to give a me a chance that day in Central Park in New York City to be his forever.

Thankfully our amazing birth mother decided to give us a chance at becoming parents.

Thankfully we have amazing family support around us to help these twins grow to have the best life possible.

Thankfully our world has started to make strides in the right direction to provide LGBTQ families with the opportunity to have a family to call their own.

Thankfully Nick and I have Nora and Smith here to remind us just how good life is each and every single day.”

This story was submitted to Love What Matters by Nicholas Romero of Upland, CA. Follow his family on Instagram here. Do you have a similar experience? We’d like to hear your important journey. Submit your own story here, and subscribe to our best stories in our free newsletter here. 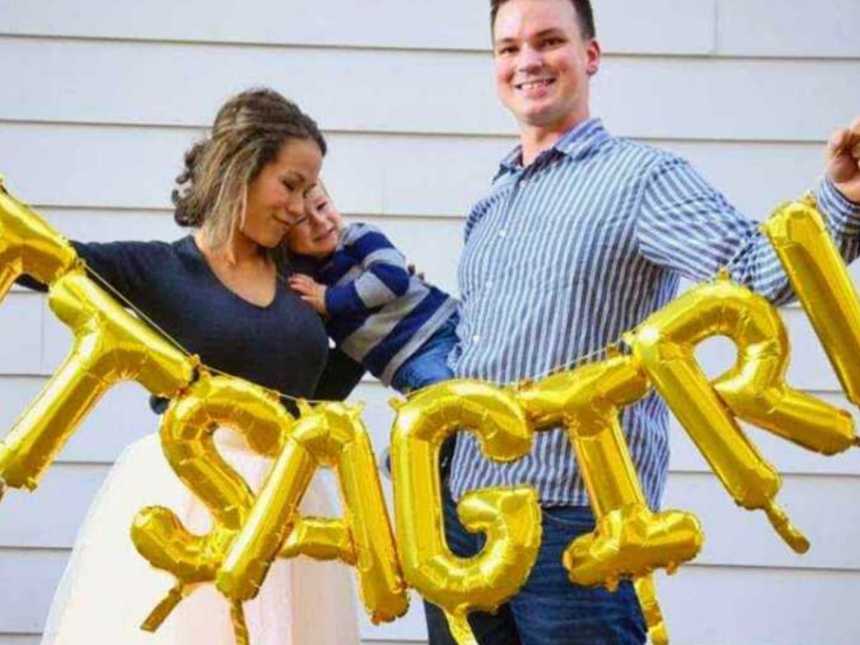 ‘It’s a girl!’ My heart sank. On the way home from my gender reveal, I cried. Hard. I was hoping it was some mistake.’: Woman candidly shares reality of ‘gender disappointment’ after years of mother’s abuse

“‘Wow, she must be shallow to care about the gender of her unborn baby.’ ‘She should just be happy to have a healthy baby!’ ‘How selfish! Some women dream of getting pregnant and can’t!’ Gender disappointment is real. We are afraid to speak about it. We fear judgement.” 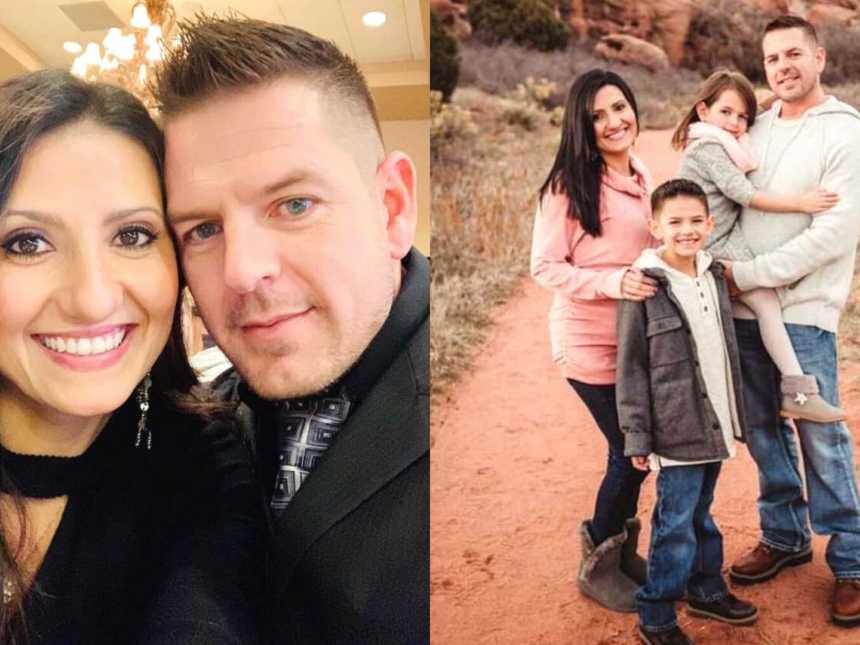