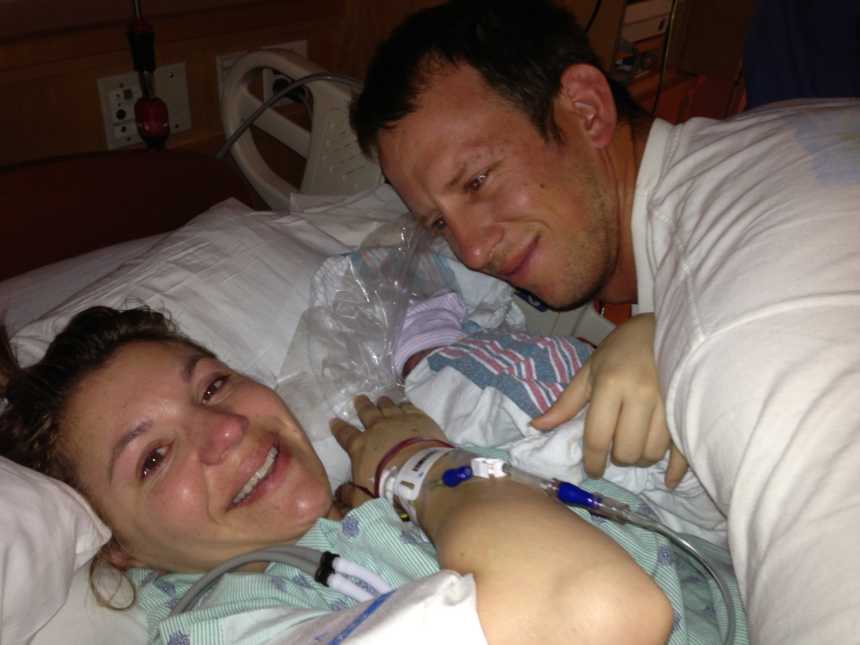 “The alarms were sounding as doctors and nurses rushed into my hospital room. The flurry of activity was a blur as the sharp pain increased. A panicked look swept over my face as the sobs of heartache consumed me. I was in labor far too early and there was nothing I could do about it. What happened in the minutes after delivering my first triplet is engraved in my mind for eternity. It’s a moment I would give anything to change, a memory that still haunts me to this day. It’s the biggest regret of my life and something that kept me up late at night for years.

It’s supposed to be a special day as you watch the miracle of life unfold in front of you. But for me, the day I gave birth to my triplets is riddled with pain, a memory that seems so distant, yet feels like just yesterday. As I lay on bed rest at 22 weeks gestation, I knew something felt off. While I hoped it was just my babies acting up, my instincts told me otherwise. Within moments, the nurse confirmed my fear, contractions had started and my triplets would be arriving more than 17 weeks premature.

I was physically nauseous; my world was caving in. The bright hospital lights blinded me as my husband squeezed my hand. This wasn’t supposed to happen. I had prayed for a miracle and my body held on week after week. I just needed a few more days; that extra time would give my triplets a fighting chance at life. But here we were, on the edge of viability, and nobody expected my babies to survive.

As the room crowded with our medical team, my doctor told me it was time. ‘Baby A’ arrived in the early morning on June 23, 2013, letting out a tiny squeak and a forceful kick. She was whisked away to an incubator, the neonatologist quickly working to save her. But within minutes, our hopes and dreams were shattered. Our baby girl would not survive.

A look of sadness and concern was visible in the doctor’s eyes as he broke the news to us. Our daughter’s lungs were too weak, there was nothing they could do. He asked me if I would like to hold my child, but instead of reaching out to my baby girl, I burst into tears and looked away. I shook my head no, too ashamed to even look at this beautiful child of mine.

I didn’t want to hold my daughter. Her limited time here on earth was quickly ticking away, yet I was wracked with guilt as I felt my body failing me. The doctor handed our baby to my husband, who gently rocked her as he stood next to my hospital bed. My husband was the pillar of strength, his fatherly instinct took over as he stared at our child, her tiny features absolutely perfect even though she only weighed one pound.

Eventually, my own mother urged me to hold my child and she quietly placed her into my arms. As I looked at my perfect little angel, I couldn’t hold back the tears. The initial shock gave way to an immense feeling of pride mixed with unbearable pain. My breathing child would slowly slip away, doctors calling her time of death just two hours after being born.

It’s a day I’ll never forget, but the day my triplets were born will always be tarnished with grief. For many months, I played back every moment of that day. I often found myself sobbing in the middle of the night, the guilt and heartache keeping me awake. There were days I felt like a monster. What kind of mother wouldn’t want to hold her own child? I was disgusted and ashamed of myself as I thought back to the moment I looked away from my dying child. And then there were days overpowered with guilt. I felt like I failed my gravely ill child when she needed me the most.

You never get over the loss of a child, but you find a way to move forward. As the months passed by, my husband and I settled into our new normal. We had one lone surviving triplet and we vowed to be strong for her. We didn’t want to live our lives dwelling on what could have been, and I eventually realized I needed to let go of the guilt and regret.

As the years pass by, the guilt has faded and the grief has changed. My triplets gave me new purpose in life, showing me the importance of living each day to the fullest. And as I think back to that moment when I was ashamed to hold my baby, I no longer punish myself with guilt or regret. I was in shock as my life changed in an instant and I know deep in my heart that all three of my babies felt loved. That love began the moment we found out we were pregnant and it’s something that will carry on forever. Two of our children may no longer be here, but I have no doubt that they’re smiling as they watch us from Heaven. I am lucky to be their mother and I know all three of my children are proud to call me ‘mom.'”

This story was written by Stacey Skrysak, an award winning television journalist based in Illinois. It originally appeared on her blog. Submit your own story here, and subscribe to our best stories in our free newsletter here.