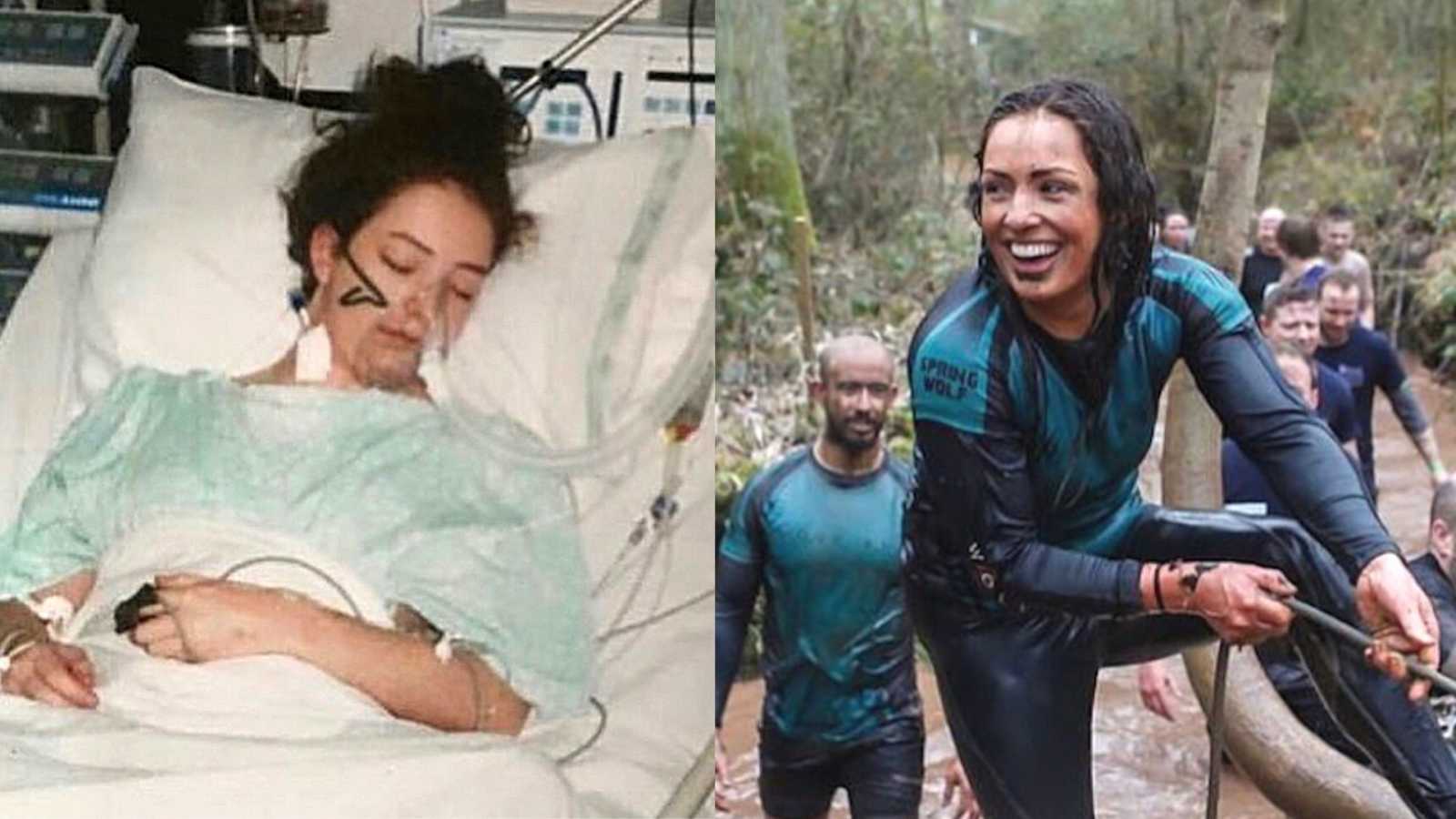 “I feel grateful for my time in a coma as it changed my life for the better.

Christmas of 2019 I was 20 years old. I remember feeling pretty horrific with what I thought was the flu. I was very sick, the headache was unbearable and my legs felt so heavy I spent the day in bed.

Boxing day I woke up with the most horrendous migraine and I kept complaining, ‘My legs have a constant, dull ache.’ My temperature was high, but I felt freezing cold. The two main signs they tell you to look for in meningitis is the rash and sensitivity to light, but I had neither. My mom took me to an emergency doctor and my boyfriend at the time carried me in, I could hardly sit up. I was diagnosed with just a bad chest infection. My mom was really angry and insisted, ‘It’s not that. We’ve both suffered from those over the years and it’s not that.’ Her gut was telling her it was something else.

Mom reluctantly took me home and half an hour later, I was found collapsed on the bathroom floor. My sister called an ambulance, it arrived in minutes. The only thing I remember was the crew asking, ‘Did you hit your head on the radiator?’ I couldn’t talk to them as I was so spaced out but kept thinking, ‘I don’t remember hitting my head.’

Once inside Solihull hospital, I was rushed straight through. By this stage, I was coughing up pints of blood. My bed was surrounded by so many doctors and nurses all looking at me. I could see the fear in their eyes as they kept asking about the mark on my chin. I was thinking to myself, ‘Never mind that I am really sick, someone must know what is wrong with me.’ One nurse took my hand and repeated, ‘You are going to be okay.’ I believe her to be my guardian angel as she put me at instant ease. I was relieved to be in good hands. I then fell asleep but what actually happened was my body crashed and my oxygen had plummeted.

My parents were told, ‘Prepare yourselves for the worst. Her chances of surviving the night are slim.’ My mom kept saying, ‘No. She is fit. She will fight and be okay.’ The doctors said, ‘You need to repeat to me what I’ve just told you, you need to prepare yourselves.’

A lumber puncture was taken and it confirmed I have meningoccal septicemia meningitis B. The mark on my chin was the rash starting to appear. I had it nowhere else, it was the last thing to appear. Another half an hour it would have been too late. My family saved my life (back then there was no vaccination for it, only C, the common strand).

I was transferred to Heartland Hospital in Birmingham. The ambulance crew were told to be on standby, but it took hours to try and stabilize me to travel. Mom and Dad had to follow behind the ambulance and drove 10 miles an hour stopping on route to stabilize me.

I was placed in intensive care on a life support machine. My family never left my side. Six days later, I started to wake up at 11.30 p.m. on New Year’s Eve on the Millennium. My parents got to celebrate me waking with fireworks over Birmingham from the hospital window.

I’m often asked, ‘Do you remember anything while you were in a coma?’ I’m sorry to say I don’t. As I was slipping into a coma, I could hear everything around me but couldn’t communicate, the same coming out the other side. So, if you are ever unfortunate enough to experience seeing anybody really sick, keep talking to them.

I have better memory of the high dependency unit as I was very drugged up and confused as to what had happening to me but too poor to care, In my head I thought the doctors and nurses were trying to kill me. I couldn’t understand why my parents weren’t protecting me. I was still sick and could hardly move. Other visitors thought I had been in a car accident because my body was very swollen from the life support machine. My eyes where blood shot, I was full of cold sores from the fans that were trying to bring my temperature down and cut from all the tubes. It’s nothing like the films where they wake up all glamorous.

A week later, I was moved to my own room in the infectious disease ward. Here I stayed another two weeks. This was the start of the uphill battle. I slept through the rest where my family went to hell and back. I’d dropped 2 stone from 9 to 7 stone. It’s funny that us girls are never happy with our weight but when you finally get the weight you want, you realize it doesn’t suit you. You realize having a bath is so uncomfortable and seeing your bones in the mirror. It makes you appreciate what you always had.

The thing I found tough was not being able to go to the bathroom on my own and having a bad stomach from all the meds and not getting to the bathroom on time. At 20, soon to be 21, your mom bathing you is mortifying. It’s tough with family and doctors trying to force you to eat and not being able to focus on anything including something as easy watching as the TV series friends. What I was eternally grateful for was the support I had from everyone I had ever met, neighbors I’d never met, people sending cards, asking for prayers at mass, I was so spoiled. Nobody knew I had meningitis as the doctors didn’t want the press getting hold of the news. They said, ‘Our jobs are hard enough as it is.’ But the word got out I was critical.

The next 6 months I found frustrating, I remember a simple task of taking Christmas cards down in my room was a huge effort I could do 2 every hour or so. Everything was exhausting and such a huge effort, something I took for granted and will never take for granted again. I had to learn to walk again, up and down the landing in my home. My parents and boyfriend eventually made me go out and walk to the nearest lamppost, gradually increasing it.

It was so hard to motivate myself to do something so hard. Although, I was never naturally sporty, I was always very fit and took it for granted. As a personal trainer, I never understood why people didn’t move or how hard it is starting out. I’m now so grateful for this experience as it taught me, don’t take your health for granted, don’t take movement for granted, love your body how it is, and be kind to your family and friends as one day you may have to rely on them. It taught me empathy for my work as a personal trainer and most of all, it taught me to keep fighting and never ever give up.

I was one of the lucky ones. Thanks to my family acting quickly and all the talented NHS crew, I survived with no problems other than being slightly deaf in one ear which is actually pretty useful for blocking out background noise.

I went on to run marathons a few years later to thank meningitis, without their work I wouldn’t be around. We now have a vaccine for B and C and lots more people are aware of the signs.”

This story was submitted to Love What Matters by Laura of Bentley Heath, Solihull. You can follow her journey on Instagram. Submit your own story here, and be sure to subscribe to our free email newsletter for our best stories, and YouTube for our best videos.

‘We’ll never ask a child to leave our home.’ The most terrified child was dropped off. She was haunted.’: Cancer survivor bonds with adopted daughter, ‘We stepped into her grief with her’

‘I have a bad feeling.’ Suddenly, I saw commotion. His diaper had fused to his lower back. I could smell his skin.’: Mom shares 2-year-old burn survivor’s journey

‘The car skidded. I tried to run, escape. A whirlwind took us up and when it stopped, my torment started.’: Accident survivor bikes 100 miles, ‘Life can be beautiful, even on wheels’

‘Can you be our designated driver?’ 5 minutes after I dropped off my mom, a drunk driver crossed the yellow line at 117 mph.’: Car crash survivor urges ‘get a ride’ after losing aunt to drunk driver 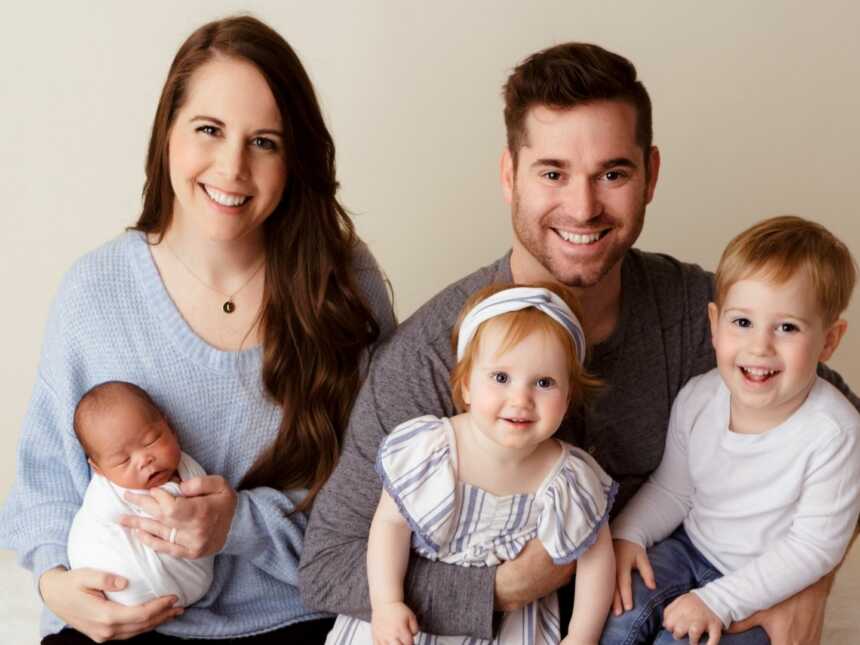 ‘I was scared. I certainly didn’t want to steal anyone’s baby.’: Mom’s eyes opened to complications on road to transracial open adoption

“‘Saving a baby’ was the name of the game—a selfless, commendable act of love to raise a child ‘like they’re your own.’ I cringe. I really do. My job as his mother is to allow him to learn about who he is.” 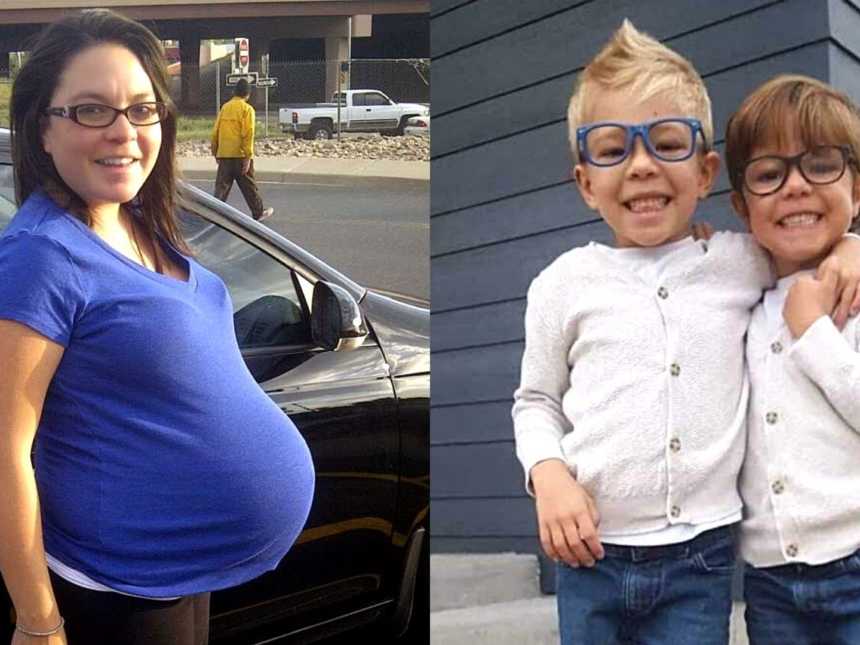 ‘If my boys were sick or struggling, I wondered if this was a curse because they weren’t meant to be here.’: Mom battling infertility has IVF twins and speaks about guilt

“‘Are they natural?’ Which really means, ‘Did you make these twins by yourself, or did you need help?’ I couldn’t run from the fact that nature, or God, never intended me to be a mom.”