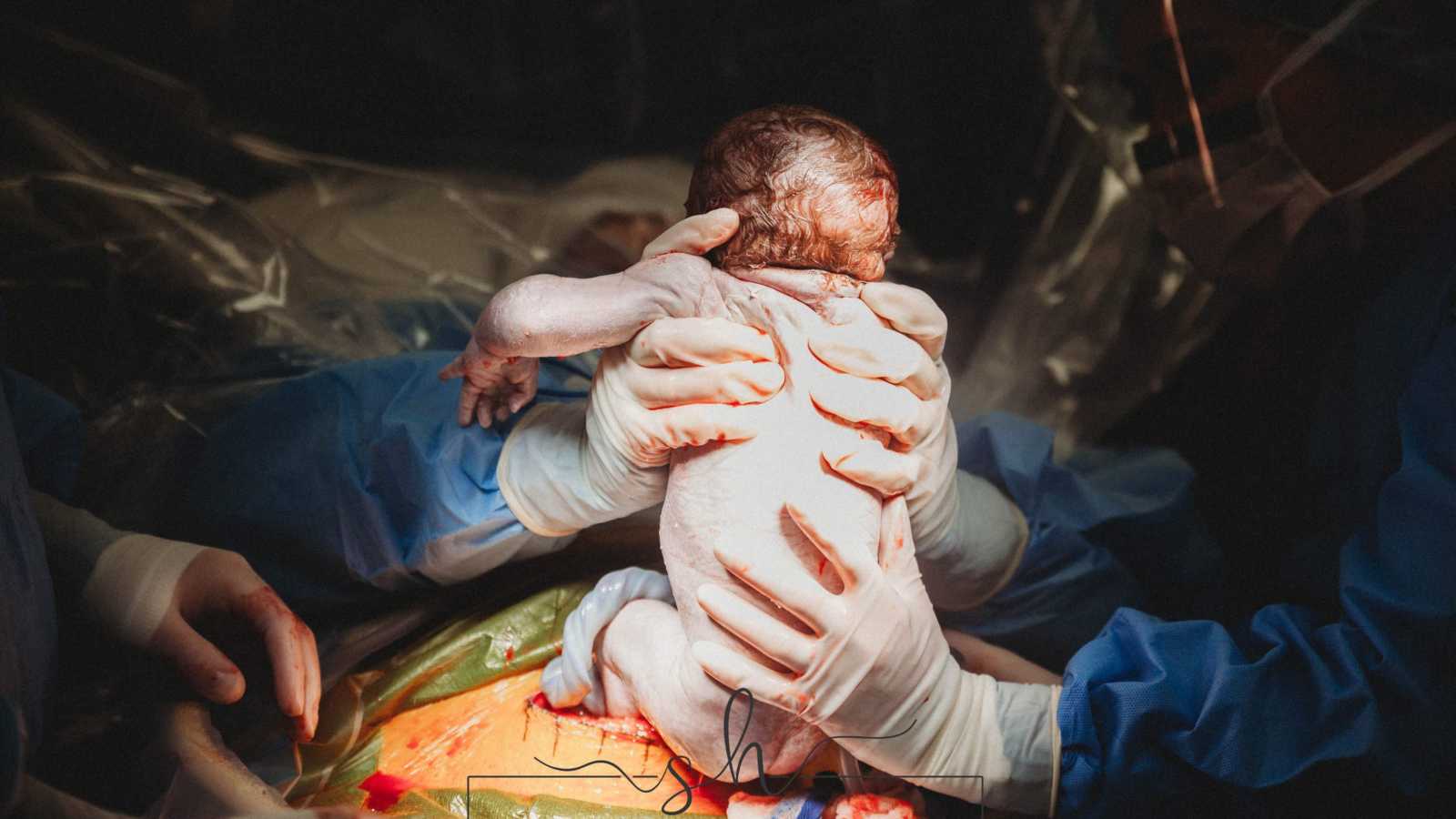 “This was by far one of the most incredible days of my life. My amazing midwife, Emily Dial, not only had a C-section, but SHE PULLED THE BABY OUT HERSELF! It was unreal. To say that she is amazing, is an understatement. She was meant to bring babies into this world and didn’t let a little thing like a C-section stop her from delivering her own.

Emily and I met 3 years ago when I was pregnant with my son and she was assigned to me as my midwife. Immediately we hit it off and she became one of my biggest cheerleaders and an amazing friend. As soon as she found out she was expecting, she asked me to photograph the birth. She told me she planned on pulling the baby out herself during her planned C-section and of course I was all for it!

Emily and her husband, Daniel, had their first C-section on May 17, 2012. The baby had a congenital diaphragmatic hernia. (Basically, he didn’t have the left side of his diaphragm and his bowel and liver were herniated into his chest and would not allow his lungs to grow). He was born at Cincinnati Children’s Hospital at full term.

‘I elected to have a C-section so I could be close to him in the hospital, rather than be induced across town and him being immediately transferred,’ Emily recalled.

Despite surgeries however, Grayson died at 10 days old.

Emily had her second C-section on September 9, 2013. They welcomed their beautiful daughter, Ella, who has been so excited to be a big sister!

We had it all planned out since Emily works at the hospital. It made it even more special that she works beside her delivery team every day. As soon as I arrived I could feel the love in the room. Nurses, doctors, anesthesiologists eagerly came in and took guesses if it was going to be a boy or a girl because what’s more exciting than pulling out your own baby if you also don’t know the sex?

They discussed the game plan one last time and prepped her for surgery. She scrubbed in so she could be sterile and put gloves on over her IV. As her doctors, Dr. Mark Wainwright and Dr. Amanda Hess, made the incision, you could feel the excitement in the room. Emily calmly reached down and began to pull the baby from her belly. I was amazed at how smoothly she came out, like just another day on the job for Emily! She pulled her all the way out and brought her up to where she could see what it was. A girl!! I don’t think there was a dry eye in the room!

Emma Kaye Dial was born at 11:17 a.m. weighing 7 pounds, 15 ounces. I overheard Emily say when they announced the time that the number 17 was special to them because Greyson had been born on the 17th. I think it was just a little reminder from him.

‘It was truly a full circle moment,’ said Emily. ‘It was tying together the two things I love the most: my family and my career. It truly was one of the happiest moments of my life. I felt so supported by everyone in the room. My physicians are not only my colleagues but my friends, which made it all the more special. Even more, not knowing the baby’s gender before the birth made the experience all the more monumental.’

I have been overwhelmed by the love for these images I shared! My post on my photography page says this has reached 73,000 people. It’s been liked over 2,000 times collectively on the photography groups I’ve shared it in, and shared countless times! I’m blown away. The biggest thing I’ve taken away from sharing these since yesterday is the overwhelming response with how much this has touched other C-section mommas. I’ve cried reading that this gave them insight to what their birth was like since they couldn’t see it or participate in it.

I have a new sense of how incredible we as women truly are. Be an advocate of your own body. You’d be amazed at the amount of women that don’t know that YOU can control your birth and not just get told what to do. Circumstances may not let you have the perfect birth you imagined, but places like Frankfort Regional Medical Center exist and midwife’s like Emily Dial exist!”

This story was submitted to Love What Matters by Sarah Hill of Sarah Hill Photography in Harrodsburg, Kentucky. Submit your story here, and be sure to subscribe to our best love stories here.