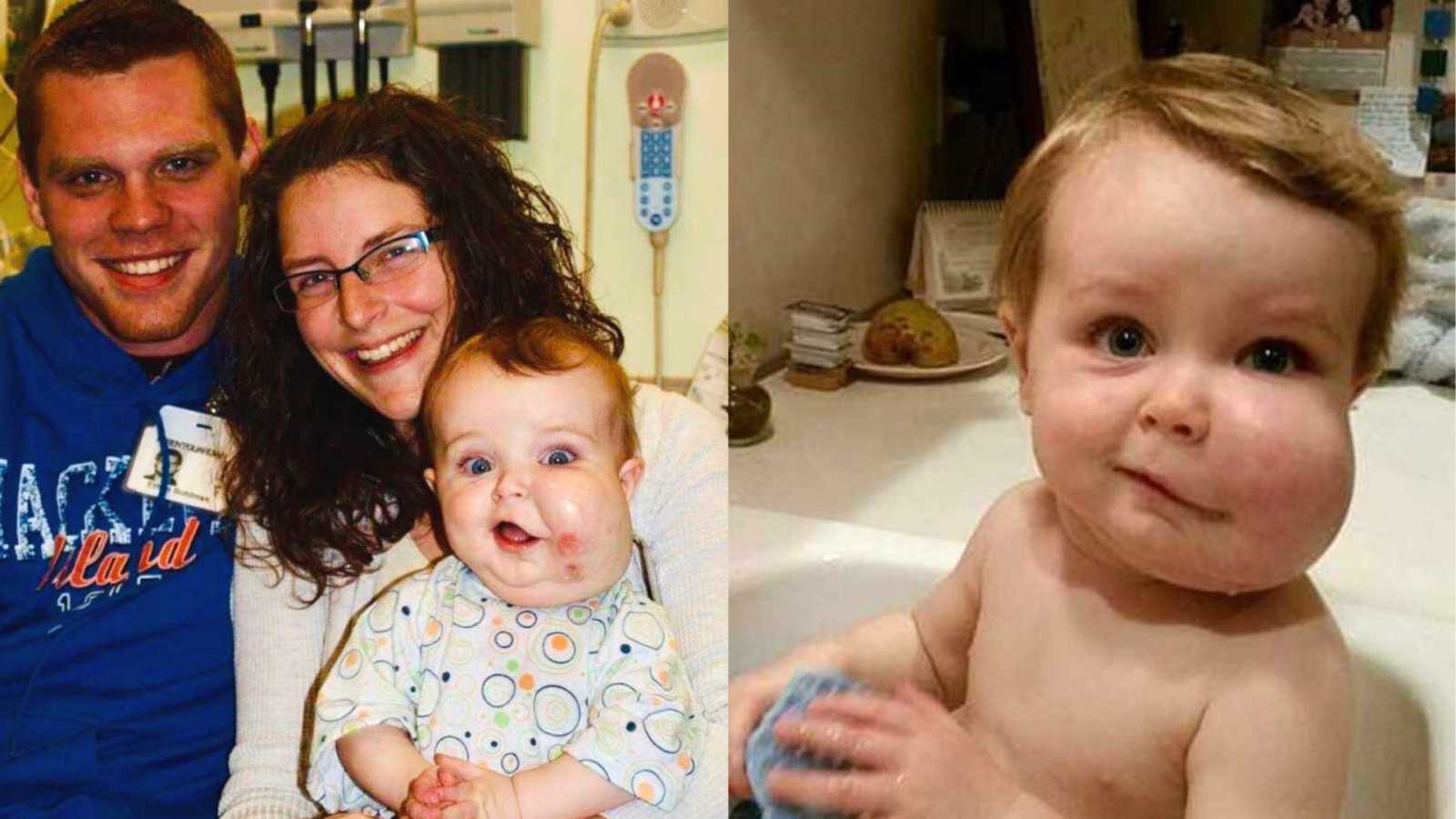 “‘Something isn’t right,’ I said as I looked up into my husband’s eyes. Our son was placed onto my chest, left cheek down. As I slowly shifted his head around, I saw what looked like an enlarged cheek. Immediately our midwife called in the doctor to check him out. Within three minutes of meeting our precious Oliver, he was taken off my chest and over to the incubator. Ear Nose and Throat, plastic surgery, and NICU were all in our room within minutes checking him over.

At this point I didn’t know how to feel. My midwife was still trying to get me to stop bleeding as I struggled to see my baby. We never knew about Ollie’s malformation until he was placed on my chest. There was no time to process, research or pray. Here he was, our firstborn. We already had no idea how to be parents but then to throw in a special needs child, we were numb. Doctors and nurses became a blur of information within those days at the hospital. Ultimately they deemed that Ollie’s breathing was stable and that he could stay with us in our room. An ultrasound confirmed that what Ollie has is a Lymphatic Malformation. It is like a sponge with all these little fluid-filled sacks making up the whole of his malformation.

Ollie’s first two years of life were relatively uneventful. At 6 months Ollie would have his first procedure. Sclerotherapy, a process of injecting an alcohol-based solution into these sacks. The goal is to get them to shrink, scar and never refill. At 9 months, we tried again. We didn’t see the progress we wanted and neither did our doctor. After that, we gave our baby a break from the hospital. He learned to eat solid foods, crawl and ultimately fill our life with so much joy that we couldn’t remember what life was like without him.

The summer before Ollie turned 2 was awful. We were on and off antibiotics for cellulitis infections (an infection that would cause Ollie’s malformation to swell drastically) all summer long. At the end of August we finally had our longest hospital stay to date. We were there a week which in the grand scheme of things is not bad, but for us, it was a first. They had Ollie on all sorts of antibiotics to try to stop the infection. Finally, on day four they found a combination that started to reduce the redness that accompanies these infections. But through all of this, Ollie didn’t stop. We made hourly trips to the toy room. He became famous for mowing the halls with a bubble mower that needed daily refills of bubbles. The nights were rough at 36 weeks pregnant with our second son but seeing Ollie get better was the encouragement I needed. This would begin the never-ending battle of infection.

We started seeing his specialist on a more consistent basis and pushed for answers. Her answer, ‘Start him on Sirolimus.’ This is a drug that hasn’t been used with Lymphatic Malformations for very long, in essence, still in the experimental stage. We battled with her until we could see no other option for Ollie. Starting it was awful; they changed his dosing with such rapid speed that his levels never stabilized. We quit. After 8 weeks of weekly lab appointments, a child who screamed and thrashed in our arms we couldn’t take it. In all of this, Ethan, my husband, and I had reached out to Boston Children’s Hospital in Boston, Mass. They had a program all set up and had many patients just like Ollie.

By this time we were back to summer time and Ollie’s infection rate had yet again spiked. Feeling at a loss here in Grand Rapids, Michigan, we decided we needed to head to Boston for answers. Our doctors here as well as our insurance wouldn’t cover us to go. They said we had options here in Michigan. We disagreed and wanted to talk to doctors who had actually been successful in treating these malformations. In December of 2018 we made the trip, against doctors wishes and without insurance.

The doctors in Boston gave us hope. Hearing the words, ‘we can definitely help Oliver,’ and ‘surgery is an option here,’ were a balm to our hearts. We weren’t crazy parents to push for better care for our son and to know that someone values your thoughts and concerns was amazing to us. We had finally gotten a foothold in the mountain that is Ollie’s care.

We returned to Grand Rapids just in time for Christmas that year and have been battling insurance requirements for an entire year for approval in order to return to Boston for surgery. A year! Ollie turned four in October and cannot wait to revisit Myrtle the turtle at the Boston Aquarium in January 2020.

Through this whole experience with Oliver and his malformation our family has learned so much. We thought we were broken more than once these past four years, but we weren’t. There were moments where hope was nowhere to be found but through it all, we had Oliver and his little brother Declan. Those two little men have such a joy that radiates through them that we couldn’t help but be happy.

Ollie has since restarted Sirolimus under a new doctors care here in Grand Rapids and has actually done very well on it. It has taken down the overall size of his malformation and has cleared up a lot of bruising on his cheek. We don’t adjust his dose on a whim and as parents we have pushed heavily for that. If I can be an encouragement to just one parent who as a child battling this type of malformation, I will take it. Be strong, advocate for your child and never give up. Cherish those moments at home, make the best of the ones at the hospital and ultimately love your children well.”

This story was submitted to Love What Matters by Hannah Bohlman of Grand Rapids, Michigan. You can follow her journey on Instagram. Do you have a similar experience? We’d like to hear your important journey. Submit your own story here. Be sure to subscribe to our free email newsletter for our best stories, and YouTube for our best videos.

‘Before the doctor punctured my belly, my husband looked to me. ‘Do you wanna know?’ My fairytale pregnancy was being ripped apart.’: Mom’s devastation over shocking Lymphatic Malformation diagnosis leads to ‘pure bliss’

‘The growth is very large. There’s a chance the baby may not survive.’ Right then, reality hit me. All the fear and nerves I carried through my pregnancy hit me all at once.’