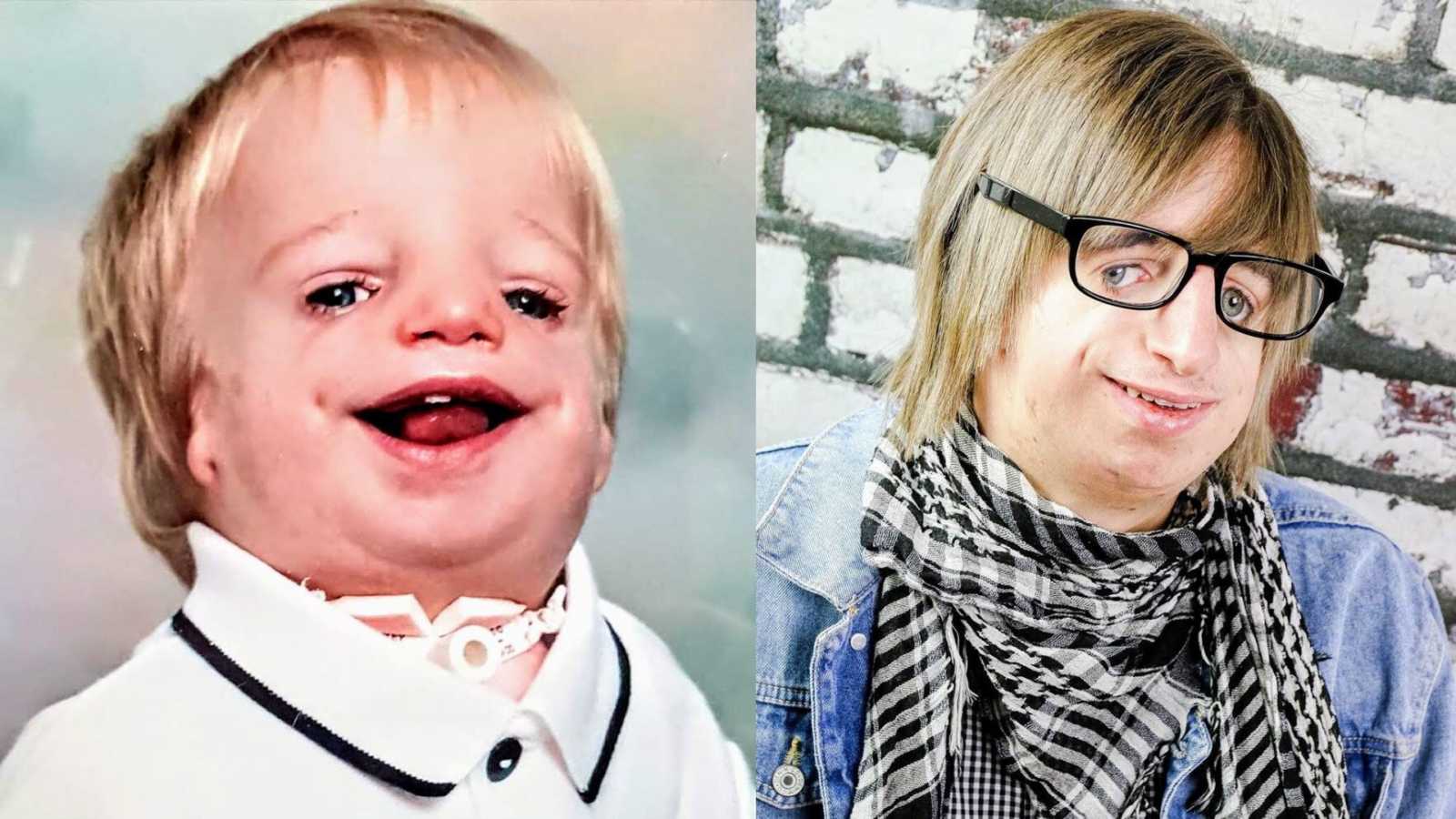 “Treacher Collins syndrome. The syndrome affects my facial parts. I was born with no ears, no cheekbones, and a receding jaw. I have had over thirty operations, including three Jaw Distractions and Cochlear Implants (Bone Anchored Hearing Aids). When I was a baby, I had to have a Tracheostomy, as I swallowed my tongue and went blue. The only way the doctors could save me was by putting in a Trachy. Peter Andre’s mother-in-law saved my life!

Growing up was amazing, as I have wonderful memories with my family. But primary school was the toughest and most emotional part of my life. Within a week or two of starting school, the bullying began with two boys. I started getting things thrown at me, like bottle lids, food, etc. It got worse as the months went on, to the point where they would physically pin me up against walls, which upset me a lot.

My initial reaction to being bullied at first was, I just thought it was just children messing around in everyday life. But it got worse to the point, they would start tripping me up in corridors and playgrounds, which was when I started to notice I was being bullied. This was serious.

I remember cycling to a friend’s house that was five minutes away from my house. As soon as I entered my friend’s street, the two boys who were bullying me saw me and started chasing me home. This chase led to me nearly getting run over. The bullies took over my life. I didn’t open up fully to anyone until later on…

It affected both my confidence and my mental health.

I used to come home every day from school crying to my parents. I used to see my mom get upset and tearful about the situation, which really hurt me. The school did nothing, to begin with. Their solution was to move me into another class with new friends and teachers. I thought, ‘Why should I be moved and not them?’ I had started to enjoy it. However, when I went out into the playground, I still had to see the bullies again.

Secondary school was not as bad as primary school luckily. I still had the stares, points, and things thrown at me, but it was better. In 2016, I became a volunteer at my local PDSA charity shop, which I loved and then later, moved on to become a waiter at a local gastropub. Meeting new people was lovely, but I had always wanted to join the health and social care industry.

Then I had an exciting change. In early 2017, I contacted a charity called Fixers, who work with young people aged between sixteen and twenty-five who want to use their past to fix the future. While with them, I was filmed sharing my personal experience of being bullied as someone with a facial disfigurement. My campaign video was aired on ITV News West Country. I was also invited to do some press work and was interviewed by a few radio stations.

Later, I was invited to feature on The Jeremy Kyle Show and Loose Woman, where I could share my story. The feedback has been fantastic! In November of the same year, I became a Support Worker where I worked with adults that have learning disabilities. I loved looking after and caring for people in my care. Then in December 2018, I moved jobs and started with the charity, MENCAP, which is a fantastic charity to work with. My anti-bullying campaign so far has been so amazing and successful.

I would like others to see my story and realize they are not alone and they have the support out there to help them. When I went through being bullied, at first, I thought I would never have support to help me but after I explained to my parents what happened, the support I had was amazing. I would like people to open up and talk about it, instead of keeping it to themselves.

My future goals are to continue to share my story and raise awareness. I want to write a book and perhaps work within the TV industry in my future. Since doing my campaign, my life has changed in a great way thanks to Fixers. They made my life amazing.

I recently did my first ever talk at a school in Taunton. What a challenge that was, to face young children to share my story but the feedback I had from teachers and students was amazing. While the students were walking in, I played Bars and Melody’s song ‘Hopeful,’ which is about bullying and went well with the assembly.

I’m glad I’m making a difference in people’s lives. I just want to continue to share my story on social media platforms and also keep raising awareness and getting the message out there. Because we all are different, we are unique and amazing in every way and should be treated the same. Life is amazing and can’t wait for the future!

This story was submitted to Love What Matters by Ashley from Taunton in Somerset. You can follow their journey on Instagram. Submit your own story here and be sure to subscribe to our free email newsletter for our best stories, and YouTube for our best videos.