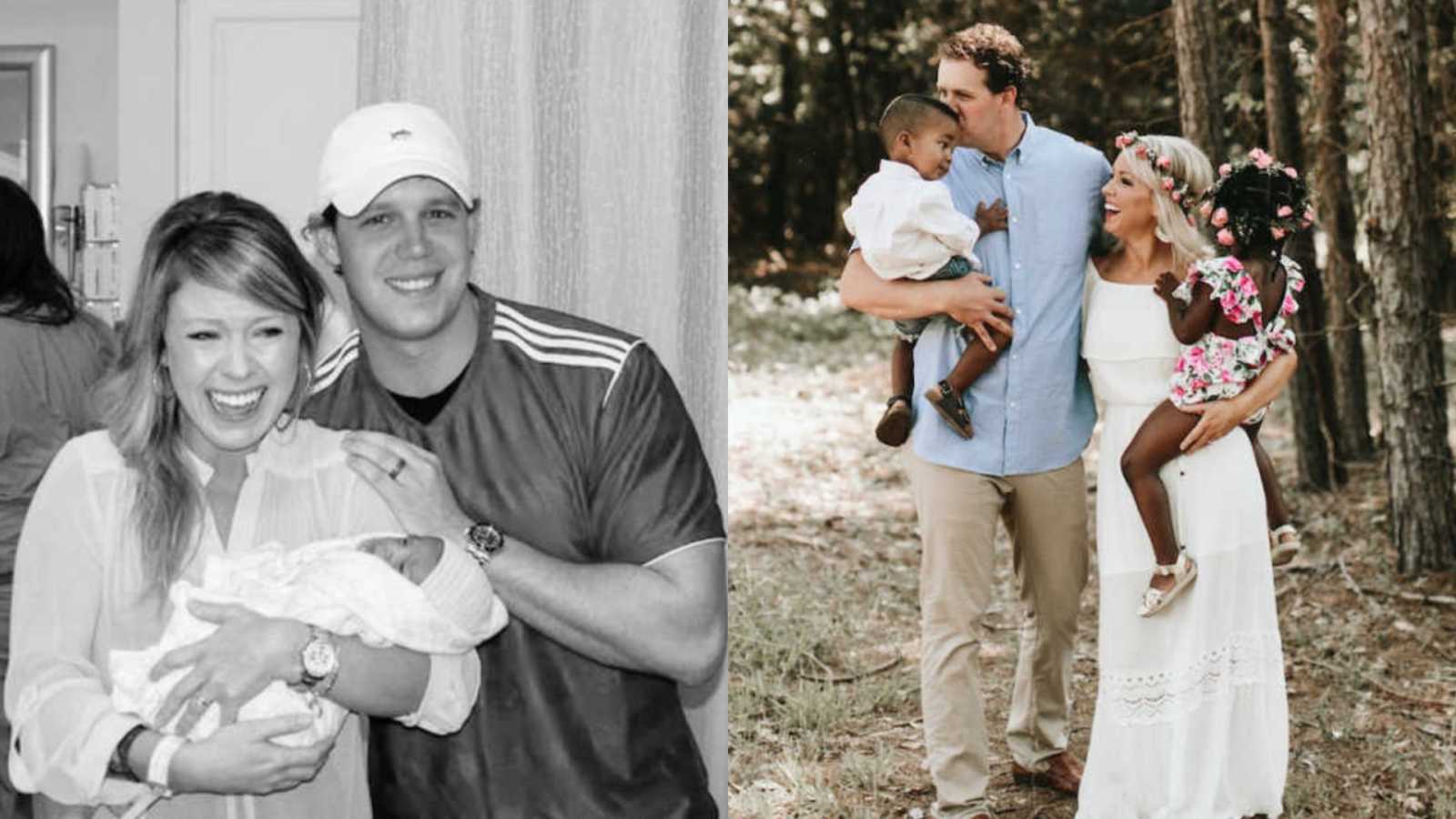 I would have lots of them. Little blonde hair girls with green eyes just like me. And they would call me ‘mama.’ I knew I would adopt one day, it was never a question. But first, I would feel a baby grow in me. I would take pictures with the positive stick. I would have the big gender reveal. I would wear the trendy maternity clothes and laugh with my husband about my silly cravings. That would be me. That was the life I dreamed.

Instead, I saw one lonely pink line month after agonizing month. I would dread walking to the mailbox, because I knew there would be another baby shower invitation mixed in along with the bills. I would give myself shot after shot and take so many hormones I thought I was losing my mind. Another friend would announce her pregnancy and although I was so happy for the story God was writing in her life, it felt like a dagger, because His story for me didn’t seem so good. I just didn’t realize how good it was going to be.

And then one morning, after seeing another lonely pink line, He met me there on my bathroom floor. I had known Him for years. I had walked with Him through lots of hard. But up until this point in my life, He had made sense. What He offered me that morning was more than giving me what I wanted. What He offered was a promise for Him to be enough. I chose to lean into Him on the cold tiles of my bathroom floor, rather than push Him away, like I had done in the past. And that morning, I knew He would be enough. I started wanting the Giver much more than the gift.

After I started leaning into Him, He started shifting areas of my heart. I began to know Him not only as God, but He became my lover. I began walking in an intimacy with Papa God, I never knew was available. Not only did He begin to change my thinking of Him, He started showing me that our story fit into a much bigger story. A Kingdom story. I started not only wanting a child to add to our family, but He moved my heart to have a deep passion for the orphan.

My husband and I attended the first leadership meeting to start an orphan care ministry in our church. He confirmed our ‘yes’ for adoption that night. We walked out of the meeting knowing our next steps in growing our family, but also with a check from a stranger that funded half of our first adoption. Because that’s how God works. We stepped out and faith, and He met us with His provision.

We immediately began paperwork through a local adoption agency. We began praying fervently for our baby who was growing in our hearts and someone else’s belly. We began praying for the woman, who would choose life, and practice sacrificial love. A few months passed. We began buying baby clothes and setting up a nursery in faith, in the same way Noah built the ark.

We finally got ‘the call.’

It was our positive test. We finally saw two pink lines. Much different than we expected, but more beautiful than we could have ever dreamed.

The first day we met her, we knew we would be family forever. She called her ‘our baby’ in a sentence and my heart melted. She asked me to take her to the last few appointments and I asked every question I could possible. I wanted to remember that she was good at math and allergic to shellfish. I wanted to be able to tell my daughter that she threw her head back when she laughed. How she dipped her fries in mayonnaise, but mostly how much she loved her. How she begged me to make sure my daughter always knew.

On a cold, cloudy late December day, I watched my daughter take her first breath in this world. I had the incredible honor to cut the cord, the one that joined them together. The nurse asked our birth mom ‘Who should wear the mommy bracelet?’ and she said, ‘Jessica. She’s her mommy.’ She placed the bracelet around my wrist and handed me my daughter. But more than anything, she gave me permission to be her mama.

The weight of that beautiful, six-pound five-ounce baby girl was so heavy. She was mine. And I was hers.

A short 16 months later, we added a son to our family through adoption again. His story was much like hers. One of the same brave woman who wanted more for her children than she was able to give. And a mama and daddy who prayed for so long to have those names.

A few short years later we got an unexpected call and within 24 hours a scared, hurting seven-year-old was standing at my door. We swore we would never be foster parents, but that was before we heard about him. I went from changing diapers and knowing all the episodes of Mickey Mouse Clubhouse, to stepping over transformers and legos, wondering what in the world to do with a seven-year-old.

Our journey with him hasn’t been easy. In some ways it’s been much harder than any journey we’ve traveled. But the beauty we have found in the mess of both his brokenness and ours is like nothing I’ve ever seen. He’s nine now, and he looks nothing like the small, scared little boy that was first standing at my door. He’s strong, handsome, and walking in a healing that has started from the inside out.

My children call my name a thousand times during the day, I’m sure much like yours. But every time, I’m still amazed. They run around my house, squirt diaper rash cream all in the carpet, throw their food at the supper table, and spend many moments of their day in time-out. They have sibling wars, messy rooms, and our house sometimes feels like the circus. But they are walking Ebenezer’s of God’s faithfulness. They are walking testimonies of how beautiful God’s story is for us when we decide He is enough. They are living proof, that His dreams for us are much greater than we could ever ask or imagine.

I believe God will heal my body one day. I believe that I will physically see two pink lines on a stick. I fully believe I will feel a baby growing in me. But if I had gotten pregnant when I wanted, when I thought that was God’s best for me, I would never be their mama, and they would never be my babies. And we were made to be family.

Our story has lots of broken parts. But in all of that hard, I found an intimacy with the Father I would never trade for easy. Adoption has wrecked my life. In the best possible way. Adoption is broken and messy. But the Father has taken all of our ashes and turned them into beauty.

Our life is nothing like I thought it would be. But I’m so thankful.

It’s more beautiful than I would have ever dreamed.”

This story was submitted to Love What Matters by Jessica Satterfield, 31, from Greenville, South Carolina. Follow her family journey on Facebook here and Instagram here. Visit her website here. Submit your story here, and be sure to subscribe to our best love stories here.

‘Why is your mom white?’ Without skipping a beat, my son said, ‘Families don’t have to match.’ My heart exploded.’: Adoptive mom doesn’t match children ‘in color,’ but says ‘we know we match hearts’ 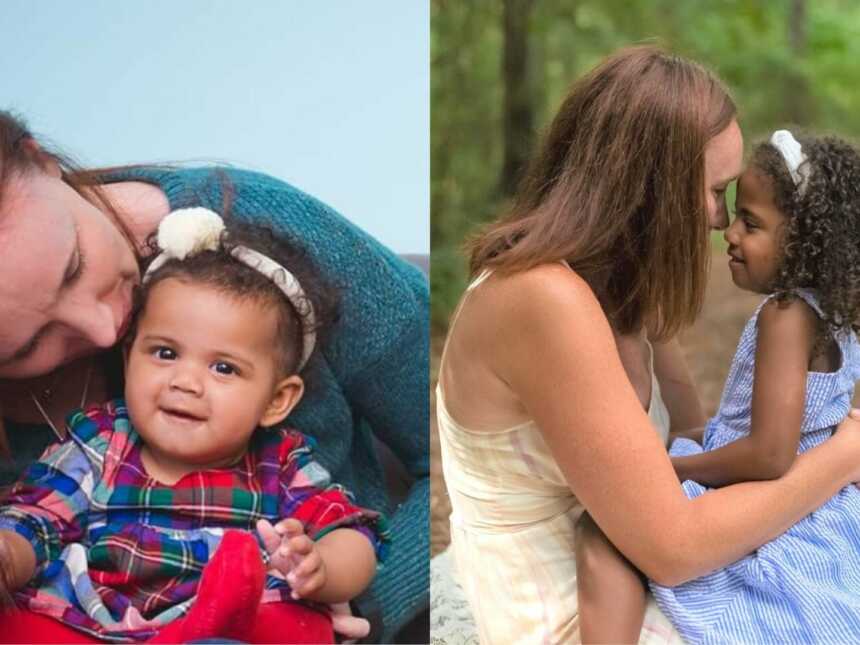