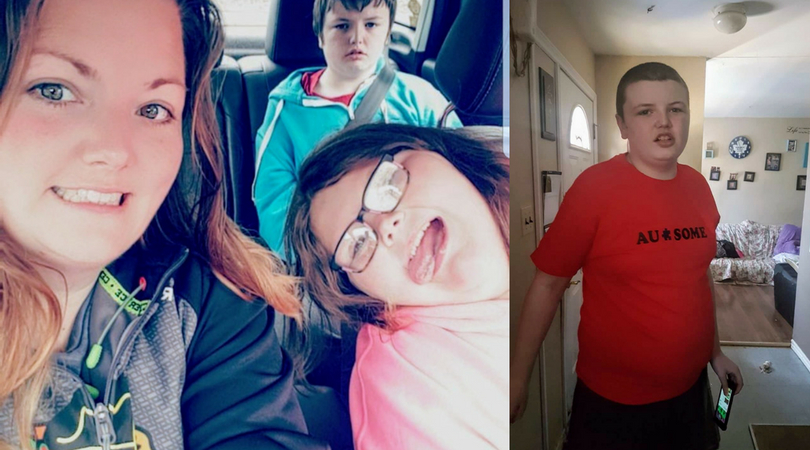 “To the man at the Peterborough Zoo today who loudly yelled while glaring at us, ‘Why do people bring kids like that out in public?,’ this letter is for you. Will you probably ever see it? No. Do I think you will actually care even if you did? Probably not. Maybe just maybe someone else will read this though and think twice about making someone feel the way you did today.

The picture attached to this letter, that’s myself and my two children. Brinlee is 11 and Logan is 13. Logan has severe autism, global developmental delay, echolalia, and I’m leaning towards Tourette’s as well. He’s big. 6-foot-1 and about 190 pounds.

You walked ahead of us as we walked into the zoo. He was being loud. He was flapping his hands. He was jumping. But he was happy.

You kept turning back and staring at us and at first it didn’t bother me. We were at Logan’s favorite place. He had worked hard all week to earn this trip and I honestly just thought you were curious. Then all hell broke loose at the zoo and I realized you weren’t curious at all. After the few hours drive to the zoo and downing lots of water, I had to pee. Thankfully like many places nowadays, Peterborough Zoo has a co-ed bathroom. Do you know how hard it is when places don’t have those? All the dads with daughters and moms with sons. Or people supporting people with disabilities. What do we do when they can’t go in the opposite sex bathroom? Anyways… he went in with me, I was careful not to use the hand dryer (loud noises can really bother autistic people, Logan is no exception). I washed my hands, dried them on my pants and out we went.

We walked about 10 feet and I knew something was wrong. Logan started grinding his teeth, making a really loud, growly ‘EEEEE’ sound and started pinching himself. I asked him if he wanted to leave or needed a drink or to use the bathroom. But he was past being able to answer. Could you imagine — Knowing you needed water? Or had a headache? Had to use the bathroom? But not being able to voice it? I held on his arms and the three of us walked to the picnic area not far from the bathrooms. I noticed you and your family were stopped and staring at us again. I was getting slightly annoyed at this point, but you still weren’t my concern. My very upset, very stressed out son was.

I finally was able to get him to voice ‘PEE’ and I realized we needed to make our way back to the bathroom. No big deal, right? WRONG. I know you watched us. I could see it out of the corner of my eye as Logan tried to grab my hair and when he couldn’t he pulled his own while still very loudly screaming ‘EEEEEEEE.’ He bit his arm. Yes, there were others staring but they glanced away quickly. You started walking closer to us and my brain instantly went into thinking, ‘Sir, please stay away. I’m trying to protect myself, my daughter and my son. I don’t need another potential person getting hurt.’ You got about two feet away from us and very loudly yelled, ‘WHY DO PEOPLE BRING KIDS LIKE THIS OUT IN PUBLIC? THEY RUIN SOCIETY.’

Now, you have your opinion and I’m sure you think you are valid in what you said. But you are wrong. Logan was being loud, he was probably scary to some people and he was definitely distracting at least you and your family from what I’m sure was supposed to be a fun family outing. What you don’t realize is Logan deserves to be out in public just as much as anyone else. He doesn’t ruin the society. He didn’t hurt anyone. We made it to the bathroom unscathed. He peed. I turned away and cried because I was relieved it went so well, but I also cried because I know there will be days like this. Days where people stare. Days where people are ignorant and hurtful. Days where we thought we too would have a fun family outing, and that just wasn’t how it started.

Was I asking for your help? Your opinion? Your advice? Nope. But you, a man about 6-foot-3 and easily 250 pounds, watched a mom who could have easily been hurt and scared and made a situation worse. You could’ve asked me if I needed help. I would’ve politely declined since, like I said, the last thing I need is to have to worry about another person in this situation, but you still could’ve. Or you could’ve done what the majority of people do and look at us, look away and go on about your business. The man who told you to ‘F**K off’ and ‘leave us alone,’ you made a threatening motion to as if you wanted to fight him. He came over and asked if we were ok. He told me to keep up the good work. Then he walked away and minded his own business.

When we came out of the bathroom, you weren’t there thankfully. We walked to the camels. They are Logan’s favorite and really all he wanted to see. You were there when we got to them. You were watching us but didn’t say anything this time. I don’t know if you realized you were a real asshat. If you were just waiting to see if Logan would act out again so you could continue your rant. I have no idea. We left not long after that and went about our day. All I can hope is that in the future if a situation like this happens again, you don’t make another family feel the way you made ours feel today. I also sincerely hope your children don’t grow up feeling that kids like Logan shouldn’t be out in public. Because he needs that social interaction. He deserves to get to see his camels after a good week of behavior. He deserves to be treated just as good as anyone else.” 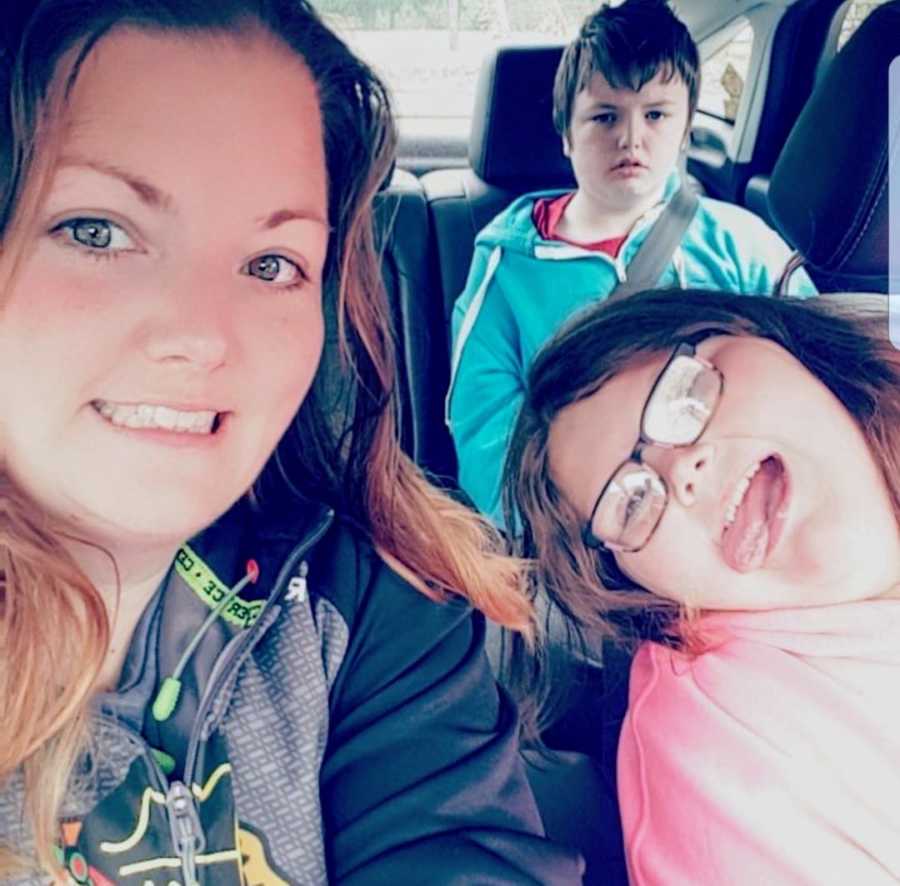 This story was submitted to Love What Matters by Ashley Wright, 34, of Ontario, Canada. Submit your own story here, and subscribe to our best stories in our free newsletter here. 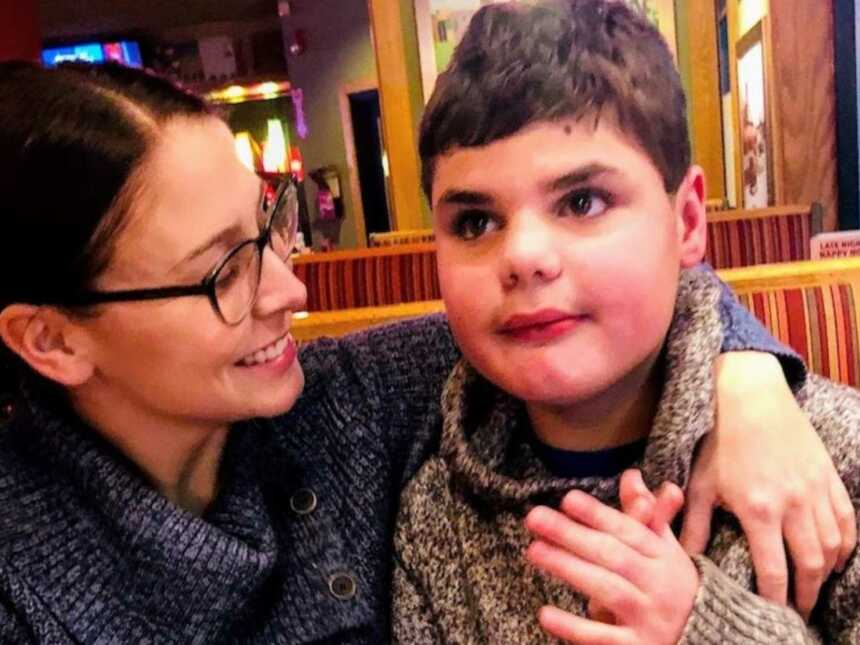 “Thank you to the employees at Beef Barn for your kindness, compassion, and willingness to support and include ALL members of the community. I am forever grateful for those who stand in the gap.”