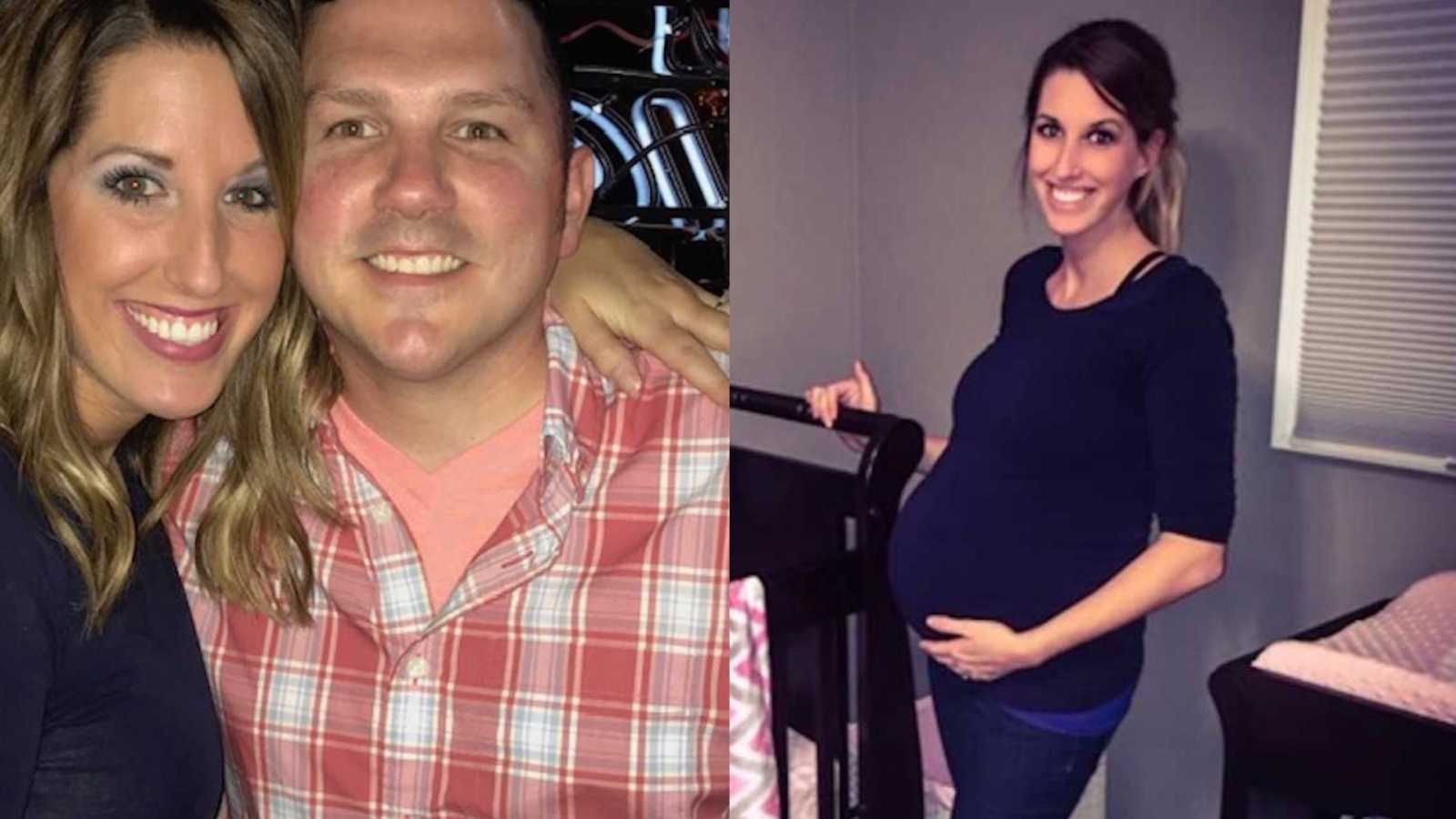 “The day our son Tyler turned 2 we were delighted to find out we were expecting baby number 2! Everything was going according to plan until that fateful day: diagnosis day.

On September 30th, 2015 I went in for a standard 20 week anatomy scan. The tech spent 45 minutes of the 1 hour ultrasound on her heart. The doctor came in quickly after the tech left and I asked what was wrong. Without saying a word, he looked at the ultrasound and said ‘Ma’am, there is something wrong with your baby’s heart.’ I left that appointment alone and terrified. I called my husband sobbing saying ‘her heart is broken! It’s BROKEN!’ A week later we met with a pediatric cardiologist and received another ultrasound but this time specifically on her heart. That day the doctor told us that Emily had three holes in her heart. Her condition was called Atrioventricular Septal Defect, more commonly known as AV canal. At that appointment he asked if we had done genetic testing because her specific defect was strongly linked to Down Syndrome. I went numb.  The rest of my pregnancy was a blur. I was consumed with countless doctors appointments and scans. I remember asking my husband ‘why us?’ He responded ‘aren’t you glad it WAS us? Anyone else could have given up on her and we are not going to do that.’ We were told that termination of my pregnancy was an option and my husband and I were both sick to our stomachs. The thought of ending the pregnancy never crossed our minds. She was going to be our daughter no matter what diagnosis was thrown at us. We told our family and friends the news immediately and we were flooded with love and support. She has been loved beyond comprehension since before anyone set eyes on her.

It wasn’t until January 30th, 2016 at 8:06 that my shattered heart was put back together. I was scheduled to be induced on a Monday with Emily because the doctor wanted total control and the ability to monitor her heart the entire time to ensure she didn’t go into distress. The Saturday before that I went to my weekly scan. The technician asked me ‘do you feel that?’ I asked ‘feel what?’ She said ‘you’re having a contraction!’ I honestly didn’t feel anything! Then I asked if I could see her face on the monitor and she said ‘I can’t show you because she’s in the birth canal! Laurie I think Mother Nature might have different plans!’ I went home after that appointment and started to feel the contractions. Around 4pm we decided to head to the hospital where it was confirmed I was in active labor. Emily was born a few hours later with no complications. My labor and delivery was textbook! Thankfully, her heart was stable so I was able to hold her briefly before she was whisked away to the NICU. I remember taking one look at her and shouting ‘omg she’s so pretty!’ I had this vision of a ‘sick’ baby. I’m not sure what I was expecting but when I saw her, all I saw was my beautiful little girl! One look at her and I knew she was sent to me. For so long I begged God to change my baby and instead she changed me.

At 3.5 months old, Emily underwent her first open heart surgery. The surgery had seemed to be a success until the next morning. She went into heart failure! Emily going into heart failure was something nobody expected! We were only supposed to be there 3-5 days to recover. Her breathing was shallow and her chest was rising and falling at an alarming rate. Her oxygen levels lowered into dangerous territory and she was turning a shade of bluish grey. The decision was made to insert a breathing tube. This pattern continued for months! Her body was too weak and she just needed extra support to get stronger and able to breathe on her own. Emily had been in the ICU for so long, the doctor said encouraged me to go back to work a few days a week. I knew she was in the best hands and I had developed some beautiful relationships with the staff! The day I decided to go back to work, I was at work for 45 minutes when I receive the call. ‘Laurie, you need to get back to the hospital as soon as you can.’ I didn’t even have time to ask what was wrong the only thing that came out of my mouth was, ‘is my daughter going to live?’ The nurse on the other end of the line paused for a moment and responded ‘we don’t know.’ I got in my car and raced to the hospital. On my way there I remember calling my mother and asking her if Emily could be buried in her christening gown which was a family heirloom. I got to the hospital and I was greeted by a priest and social worker. I remember walking into Emily‘s room and not even recognizing her. I collapsed into a nurses arms and sobbed. That same night, it was decided that she would need a second open heart surgery if there was any chance she would survive.

We had  hundreds of failed attempts at recovery. She spent nearly 3 months on life support. On July 11th, 2016, her surgeon went back in to perform a second open heart in an attempt to get her to breath on her own. It was SUCCESSFUL! So after 95 days in the pediatric surgical heart unit, our baby girl came home! It wasn’t without a ton of setbacks. She was admitted a total of 24  times to the ICU for respiratory issues. This past May of 2018, Emily underwent her 3rd (and not last) open heart and since then has been thriving! In fact, she just started preschool this week! Although she is 3, she does not talk or walk yet but it’s something through daily therapies we are confident she will be successful in, in her own time.

Our journey with Emily was hard but it created something I can never describe. The relationship she has with her brother is something that parents would consider ‘sibling goals’. My Tyler has had to grow up faster than most kids. He had his baby sister at home one second and the next she was gone. He didn’t understand why but he knew he had to be strong. I remember specifically one time we were out in public and I was feeding Emily via her feeding tube in her stomach. The whole process is done with a syringe and a feeding pump and another child came over and asked ‘what is that?’ Tyler quickly jumped into defense mode and shouted ‘it’s her feeding tube and it’s OK!’ To this day he is always the first one to defend her! He also doesn’t let a day go by without reminding her ‘big brother loves you.’

The most beautiful and purest form of love. We will continue to monitor her heart and she will continue learning every day and becoming the best version of herself and I can’t wait to watch it all from the front row.”

This story was submitted to Love What Matters by Laurie Cepkauskas. Follow Eily’s journey on Facebook here, and Instagram here.. Submit your own story here, and subscribe to our best stories in our free newsletter here.