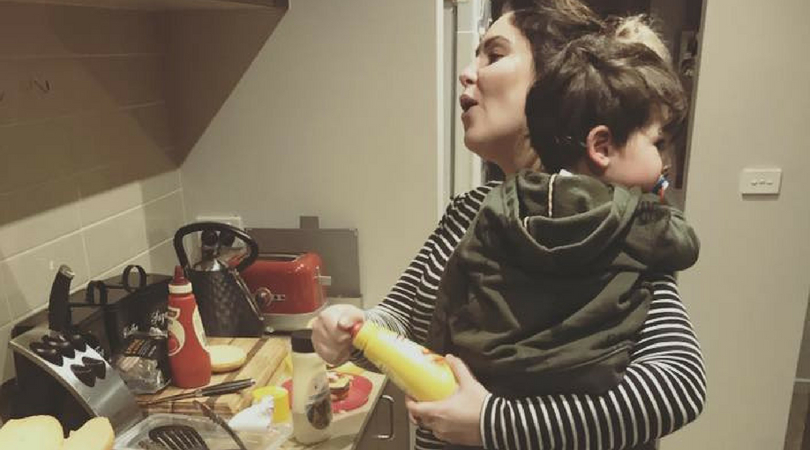 “I had a friend who I went to college with who texted me recently and said, ‘What’s life like as a mom?’ – she’s thinking of having babies.

She said, ‘People keep telling me it’s hard, but it’s worth it, but I don’t know what that means.’

So I told her, ‘Well you give birth to this beautiful thing that is so foreign to you, that’s loud and scary and so beautiful. You are trying to love and care for it and also recover from birth while trying to figure out what the hell you’re doing , and that becomes really hard.

Your husband, partner, the guy who impregnated you becomes your enemy. The guy you loved so deeply and whose eyes you looked into when they presented that baby to you and thought, we are in this together, becomes the guy you fight with over who has it harder, who needs more sleep, who does more and less. He becomes your housemate for a while, and that hurts.

You’re mental health goes sideways, and you’re a mix of feeling an overwhelming feeling of love and then despair all in one day, all put together with guilt.

You don’t have time for anything anymore, like under your boobs will literally stink and you never knew that areas like that could smell. You get frustrated because life has changed so much and all the little things you took for granted, like being alone and showering, are now luxuries. Sleep is a luxury. And that bothers you. You think, ‘Why are all these mom so okay with this? And why do they all have their sh*t together?’ But news flash…. they all feel and think the same. Some are just having a really good day and others would rather keep it to themselves, there’s no right or wrong.

You think, ‘What’s a mother?’ I can’t be this Stepford Wife who cooks and cleans and holds her baby for hours on end without wishing time away or wishing you could sit by yourself for 5 hours. I still like to chug a wine and fall asleep with half eaten pizza in my hair… and you’ll struggle with that, but then one day you kinda realize, ‘I can still be her and be a mom.’

But not before you ride the wave of doubt and guilt.

You’ll read articles and people will tell you things and you’ll think, ‘Oh my lord I’m screwing up this child,’ and it’ll scare you and you’ll stay awake at night. You’re always thinking. Always. But that’s love.

You’ll doubt yourself every day that you’re doing a good job and then they’ll say ‘thank you,’ or give someone random a hug, or do something to basically save the freaking world, and you’re like, ‘Wow, that’s my kid, and I did that.’

And yeah, some days you’ll want to sell them on a eBay but other days you’ll wish there were more hours in the day to stare at them, and that’s normal and that’s love too.

So yeah, it’s hard. It’s so hard, but as someone who suffered years of depression and wondered if she did the right thing, it’s worth it. It’s so worth it. Every little damn thing they do reminds you of why every little hard moment is so worth it. You’ll start to love your man too…And you wouldn’t trade them for the world, them – it… none of it, you wouldn’t even really sell them on eBay, you’ll love them forever until your very last breath…and that’s only an inch of what it’s like to be a mother.'”

Do you know someone who could benefit from this story? Please SHARE on Facebook or Twitter to make them aware there is a community of support available.