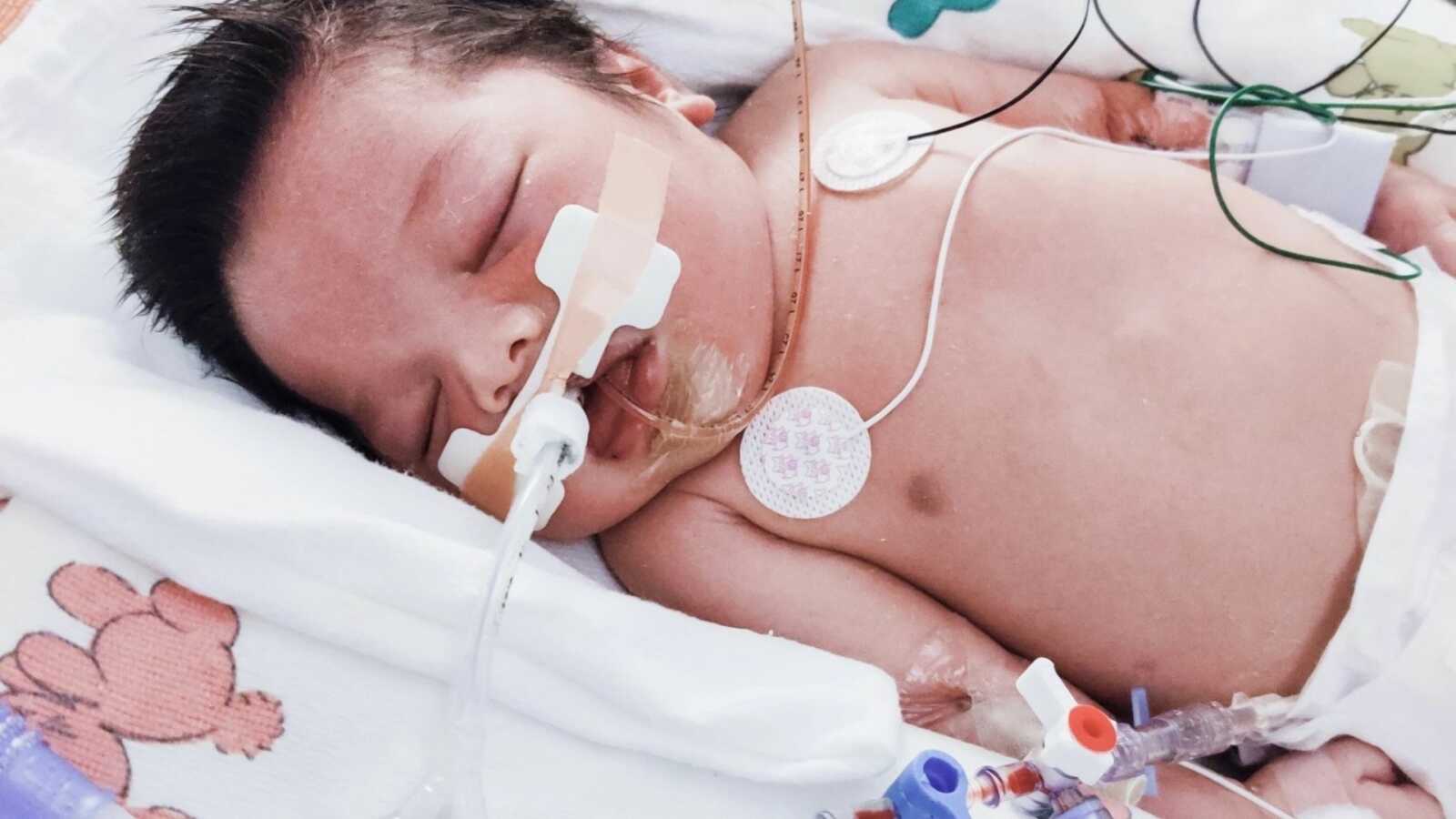 Disclaimer: This story includes details and images of child loss that may be triggering for some.

“I’ve been sitting on this one for some time now. The thoughts have been swirling around in my mind and I haven’t quite been able to gather them and put them into words. I’m fearful my tone will come off angry when really, I am hurting and heartbroken.

If you feel angry or defensive after reading this, I would challenge you to dig deeper into what’s beneath that anger. Sometimes when we peel back defensiveness, we find conviction and a contrite spirit and that is a beautiful thing. I don’t share this to make anyone feel bad or guilty, but instead to share a different perspective and my point of view as a mama of a brain-damaged child.

Before I get into this, I feel like I need to explain in more detail what happened to Sterling. I have considered leaving this part out because it doesn’t matter whether he was born with or without the damage — our love and my feelings about his life and death would’ve been exactly the same. But in an effort to better educate about Urea Cycle Disorders, and since it is a part of Sterling’s story, it’s important I explain.

Sterling was not born with brain damage. He was a neurotypical newborn. He did not suffer a brain injury from lack of oxygen, HIE injury, or birth asphyxia. Sterling was born with an inborn error of metabolism. My husband and I are not carriers. It was a random mutation only found in Sterling and no other family members have it. The rare metabolic disorder (also known as an urea cycle disorder), is called Ornithine Transcarbamylase deficiency.

Ornithine Transcarbamylase (OTC) is a liver enzyme that aids in the breakdown of protein and ammonia in the body. When a person lacks OTC, their body is not able to break down and flush out ammonia. Ammonia is a neurotoxin, so when it builds up, it can cause damage to the brain. High ammonia levels (Hyperammonemia) left untreated for too long can create permanent and extensive damage. The key is to diagnose correctly and properly treat as soon as possible. There are different types and severities of OTC deficiency, so while your cousin’s friend’s aunt’s neighbor might have it too, their life might look very different than Sterling’s did (or would have, had they saved him).

So, Sterling was born neurotypical with a metabolic disorder. Every time he ate, his body wasn’t able to process the proteins correctly and his blood became flooded with ammonia. Over the course of a few days, going misdiagnosed, his brain was marinating in toxin and the ammonia destroyed it. His poor little brain was so damaged it completely shut down all the rest of his organs and he died.

But what if they had diagnosed it in time? What would his life have been like then?

This is impossible for me to answer. I just don’t know. Nobody knows. It would have depended on when they found it, how fast he would’ve been treated, and how well it would’ve been managed after that.

But what about his quality of life?

Those words are so triggering to me, to be honest, but they’ve been said to me over and over. At first, I didn’t want anyone to know he had suffered brain damage, not because I was ashamed or embarrassed, but because I know the world we live in. It’s one where people measure your worth and your ‘quality of life’ based on your abilities.

When Sterling died, it was tragic. Everyone was shocked and in disbelief — until they learned he was brain-damaged when he died. Then, suddenly, it wasn’t so sad. Suddenly, people acted as if we were lucky we didn’t have to live the rest of our lives with a disabled child, as if God performed some mercy killing and we should be grateful.

Actual words that have been said to me include:

‘… but think about his poor quality of life.’
‘At least you don’t have to live with a brain-damaged child.’
‘… but he would’ve been special needs.’
‘He might’ve needed care his whole life and the rest of yours.’

‘Quality of life.’ Did you know there is actually no way to measure the quality of life because it is so individual to each person? I don’t mean to be harsh, but let’s really think about what we’re saying when we imply someone is better off dead because their ‘quality of life’ might not have matched up to what WE think a good quality life looks like.

How would you measure the quality of life? How would you separate the high quality from the poor quality? You would have to consider people in all kinds of different situations that are less than ideal. This would include people living in abusive homes, people who are starving, people who are depressed or anxious, people living in poverty or even financially unstable people, people with chronic pain, chronic illness, the visually impaired, the hearing impaired, people with cancer, or addiction, people who hoard… you name it.

You don’t hear about a starving orphan who passed away and say, ‘Well, it’s good they died because they were suffering anyway.’ Or if the addict dies of an overdose, you don’t say, ‘Well, they must’ve been miserable so it’s better this way.’

Life is hard. It’s hard for everyone, and everyone’s life looks different. But just because someone’s difficult looks different than our difficult, doesn’t give us the right to decide which lives are worth living and which ones aren’t. We can’t hear from Sterling himself on what he would’ve considered a good life, and we do not get to decide for him.

‘At least.’ These two words will be the bane of my existence. These two words should never be said to any grieving person or to anyone having a hard time. It enforces toxic positivity and tells that person you’re trying to minimize their pain. ESPECIALLY, don’t say these worse when you’re insinuating this person’s child or family member is better off dead. I would choose a brain-damaged baby over a dead baby any day.

‘Special needs.’ Disabled, medically fragile, medically complex — Sterling might’ve fit into all of these categories and we would’ve loved him just the same. We WANTED him. We wanted HIM. It didn’t matter what challenges he would’ve come with. I’m not perfect, but I am a good mom and I would’ve been damn good at caring for him. Pity would’ve just pissed me off. I would’ve needed support. And love. And for people to love him and accept him as much as they did before the ammonia poisoned his brain.

‘Care for the rest of your lives.’ It doesn’t matter what kind of care he would’ve needed, or if I would’ve been caring for him the rest of our lives. That may not have been the life I would’ve chosen for him, but I would have chosen that life for me. I would rather be taking care of him than grieving him for the rest of my life. People who act like I should be relieved he isn’t here, or people who are relieved, hurt me deeply. I’m not relieved. I’m devastated.

Having a baby who ended up brain-damaged really opened my eyes to the way a lot of people actually view disabled people. It breaks my heart there is still this stigma surrounding these worthy, beautiful, valuable people. We have such a long way to go.

I can’t tell you what Sterling’s life would’ve looked like had he lived, or what disabilities he might’ve had. But I can tell you, no matter what, he is worthy. He is equally as important and valuable as everybody else. He is wanted and loved. His life was precious, and though it was different than yours or mine, his life was worth living.”

This story was submitted to Love What Matters  by Breinne Chavers of Ontario, CA. You can follow her journey on Instagram and on her website. Submit your own story  here, and be sure to  subscribe to our free email newsletter for our best stories, and  YouTube for our best videos.

‘I’d lie on the bathroom floor and tell God I was ready; he could take me. I’ll never be fully healed.’: Mom loses 6-day-old son to rare metabolic disorder, shares reality of grief

‘It was a birth injury.’ I was furious. Because it was a home birth, he was denied care.’: Woman loses son after being refused care, ‘They let us down in our time of need’

‘I’m seeing something.’ My heart sank. This is it. I’ve lived a good life. She pointed to the screen. ‘That’s a yolk sac.’: Mom’s ovarian mass ultrasound turned surprise baby discovery