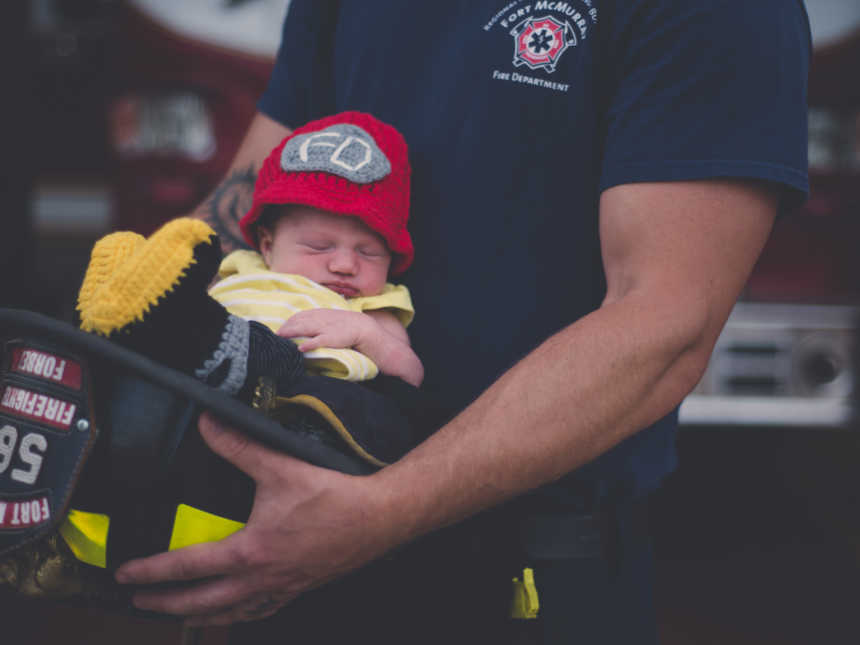 “I remember I was having a dance party and cleaning the kitchen when the emergency alert came on the radio. I’m not sure if I can actually describe the emotions that roll through your body when you hear the city that inhabits your best friend of over a dozen years is being engulfed in flames and evacuated. Even writing this, I don’t know how I’m going to make it though it without crying as my eyes are already welling up.

I remember panicking, pacing, crying. I didn’t know, none of us knew, what was going to happen to the people of Fort McMurray. All we knew is they had to get out. We were hearing reports that many people were being stranded by the lack of gas and resources. News on TV showed flames burning roads like a candle with a wick on both ends.

Where was my best friend, her babies, her husband, her family? The same family that when I forgot my wallet on a road trip, called the gas station with their Visa so I could get gas and a meal to go home, or sent me an entire Pampers box of baby clothes in the mail. The same best friend who made a pact with me at 19 that we would be best friends forever, despite distance and life. She was so far away, and I was terrified.

Two years before this, I stood next to Danielle as she said her ‘I Do’s’ to her longtime partner and father to her children. It was a beautiful ceremony next to the water and I attended alone, leaving my son behind for the first time since giving birth. I remember Danielle seeing me and bursting into tears of appreciation, thanking me for being there; knowing how hard leaving my son was going to be. Truth be told, there isn’t much that would have stopped me from being there for her. This is one woman who deserves all the support and love I could muster. She wasn’t just marrying the man of her dreams — we didn’t know it then but, Danielle was marrying a hero. See, Matt, is a Fort McMurray firefighter and stayed behind to save the city they called home. He kissed his wife and kids goodbye, with ash raining down on them, to head back and battle the blazes that had most of the city on their way out of in danger.

And as much as Matt is a hero, because he truly is, the real MVP was Danielle. Only a few weeks before then, Matt and Danielle said their hellos, and goodbyes, to a beautiful little girl born still at 27 weeks named Emma. A beautiful precious life my best friend and her family now carry around as an angel.

Not yet emotionally or physically ready to be put through anything more, her two other small children were sick with 104 degree temperatures. It took Danielle 48 hours, normally a 5-hour trip, through literally a wall of fire, gas shortage, sick babies and uncertainty, to get to Edmonton.

I kept tabs on them throughout the journey to me and eventually learned that her entire family, besides Matt, had made it safe and sound.

The truth is, the entire province stepped up to make sure the city of Fort McMurray was safe, taken care of and supported. ‘Fort McMurray strong’ became our logo, mantra and chant. Records were shattered when it came to charity donations, and homes were opened to complete strangers. It was a humanity-restoring moment for our country, and our province. Our citizens have a lot to be proud of.

Nothing of course replaces the feeling of home, or the things they stood to lose. When Danielle was evacuated from her home she had such a short amount of time to pack, as did most of the evacuees, that some of her most important objects and mementos were in danger of being engulfed in flames. It was an incredibly stressful time for her; she had already been through enough. The only silver lining I could see is that the Universe had brought her close, allowing me the opportunity to recruit resources, go on Costco runs, and otherwise just be there for her.

Her family stayed in Spruce Grove for a few months before given the okay to return home. The newspaper adorned her husband on the front page welcoming people back into the city, and the night the city ‘reopened’ to its citizens, the sky lit up with the most beautiful aurora borealis you could ever imagine, which is incredibly rare in the summer.

That wasn’t the biggest miracle to happen, it would turn out. Danielle would tell me shortly after she was pregnant again, with a little girl, again.

I hopped on the first flight out as soon I could to photograph this beautiful sweetheart.

To me, Ember embodies the light at the end of the tunnel. The beauty that is still capable despite the pain the past year had brought.

I shot Ember’s newborn session at the Fort McMurray fire hall because I felt it fitting.

Her timing, her name and all she represents, is that of strength and heroism. She is a miracle born to heroes.”

This story was submitted to Love What Matters by Kayleigh Lynds of Kayleigh Lynds Photographyin Spruce Grove, Alberta, Canada.  Submit your story here, and be sure to subscribe to our best love stories here.