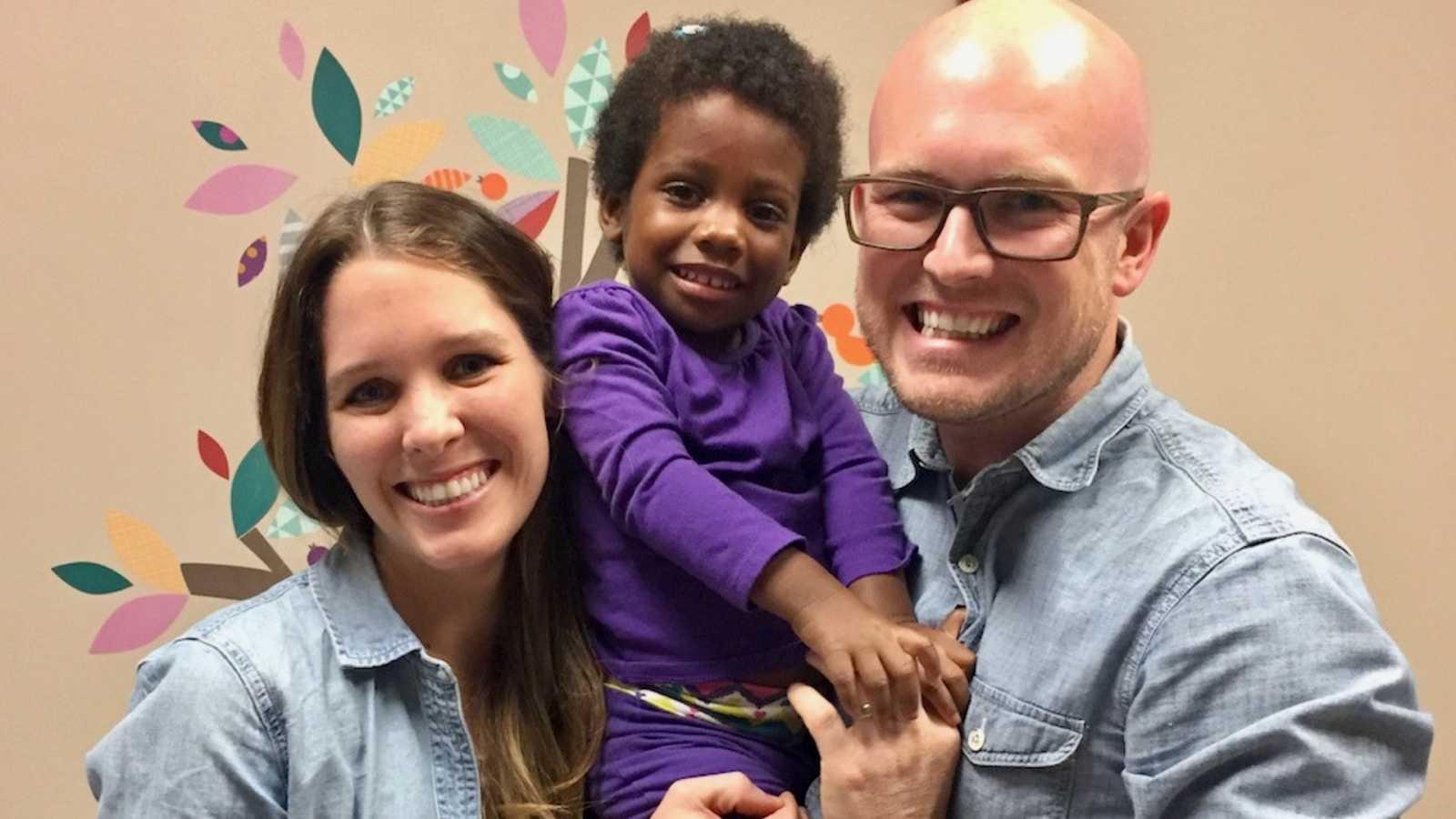 “We were high school sweethearts. We talked about adoption long before we got married, we just had to experience a few bumps along the way in order to get there. I (Melissa) and my now husband, Jacob, were 15 and 16 when we first met and started ‘dating.’ We were married at 20 and 21, and this year we celebrated our 10-year wedding anniversary. Our journey to have chil-dren has not gone according to ‘our plan,’ but it has turned out way more beautifully because God had a different plan of how love made our family.

On our one-year wedding anniversary we moved to India, we wanted to adopt there but the laws had recently changed, and we could not adopt and live in India at the same time. While we lived there, I worked with street kids at a care center. I would bathe them, paint their nails, play bad-minton, serve chai and try my best to meet any other basic needs that a mom should.

During this season of life, we had a miscarriage, then began over a year of infertility treatments. This was a hard season as I was in foreign country as well as dealing with all the extra hormones. Thankfully, we were blessed with the birth of our daughter Eden just over a year later! Soon after that we found out we were pregnant with our son Judah.

During Judah’s pregnancy, we went to the foothills of the Himalayas for language school and there I had the second grand mal seizure of my life. By God’s Grace we were fortunate enough to have a doctor traveling with us, who took me to the nearest hospital. Unfortunately, there were no ultrasound machines in the area (due to high abortion rates of baby girls in that area) so we could not find out if our baby boy was alive. I did some therapy for 3 days until I was stable enough to travel to the closest city, Dehradun to find out what was going on. We learned that our son was alive, but the doctor said, ‘I don’t know what condition the baby will be born in!’ We also found out I have a seizure disorder. We then transferred to New Delhi to wait for our son to be born.

During Judah’s birth I had another grand mal seizure. Which caused the doctors to fear for both of our lives as I was already weak. I felt the strain of the seizure and labour on my body and looked at Jacob and said, ‘I love you and I love Eden and I know you will take good care of her if I don’t make it.’ They called in an emergency doctor to do a cesarean birth but mirac-ulously I was able to have him naturally before they began the procedure. Both our son and I were fine! A few months later I was placed on the proper medication with the correct dosage which eventually stopped the seizures.

The care center that I volunteered at will always hold a very special place in my heart. It was there that my kids learned to walk, play Legos, drink chai and color. Although I would have loved to have the care center kids come live with us, it was not legal in India. Leaving India broke my heart as those were kids, I loved. I think of them all the time. Their stories. How they are doing. Where are they sleeping. And countless other thoughts… But it was these precious kids who prepared our hearts to adopt from foster care.

Once our third joyful bundle of energy, Israel, was born, we decided that we really wanted to pursue adoption since we had talked about it for so many years. We had thought we would adopt internationally since we had lived overseas. But we were sitting in church and our pastor was talking about being involved where you are planted and being in the com-munity! We thought, ‘This is it! We need to adopt locally!’ And we signed up for Foster and Adoption classes with our local Department of Child and Family Services a week later. Naturally, we felt both excited and nervous at the same time.

We really had no clue what we were signing up for. Our eyes were opened as we heard count-less stories in class. Although we had started the process in September 2016, it wasn’t until November 2017 that we received an email asking if we would consider a legal risk case for an adoption placement. We read the file and quickly said, ‘YES!’ Upon approval, we were finally in-troduced to our precious Shiloh on December 20th, 2017. ‘She was 2.5 at the time and in that moment, I realized the depth pain of adoption; and that this child will grieve. Despite our own emotional roller coaster, we had been on over the past year, we soon realized that we were also witnessing a child being ripped apart from her family with no choice of her own. I was struck with conflicting emotions—grief and compassion—but also excitement! After all, isn’t this what we had been waiting for?!’

The first visit was supervised at a DCF facility which made it awkward and quiet. Shortly after, we had another supervised visit at a park with all of our kids—which went much better other than the fact that I accidentally knocked Shiloh off the swing.

Over the next six weeks we had unsupervised day visits which allowed me to pick up Shiloh from day care at 9 a.m. and drop her off by 4:30 p.m. She quickly warmed up to us and she felt like our daughter after just a few visits. I’ll never forget the first time she called me ‘Mama.’

The day she was officially removed from her home was extremely difficult. The social worker was unavailable as she had to go to court. So, my husband, Jake, went to pick her up with a close friend. Jake said, ‘It was awful.’ Although Shiloh didn’t know what was going on, her biological family certainly did. Jake said afterwards that ‘he wouldn’t wish that upon anyone.’

We had social worker visits every three weeks until her adoption was finalized 92 days later. The Judge asked Jake why we wanted to adopt Shiloh. And I wept as he gave his response. ‘She is already our daughter. This is just the paperwork catching up to our hearts!’

We have been extremely blessed! Shiloh is a strong, confident girl who knows her place in the world. She has a sister who has prayed for her since before she was born and who loves her so well. She has two brothers who will do anything to protect her, and thankfully, Shiloh loves them just as much.

We had most of our friends’ and family’s support who walked with us during this emotional jour-ney (which at times I know could not have been easy on them). One thing we learned is that you need to ‘find your tribe,’ those who will walk through fire with you. Adoption can sometimes ruffle people up. We definitely lost some family and friends over their state-ments, opinions and assumptions on our adoption, but we gained a daughter and SHE is worth it!

One funny coincidence is the sequence of our kiddos’ ages. They are a countdown! This past summer they were 6, 5, 4, and 3. While we were pretty open to anything when it came to adop-tion (including age), the perfect fit of even her age continually reminds us of the perfect fit she is in our family.

This story was submitted to Love What Matters by Melissa Joy.  Follow her family’s journey on Instagram here. Submit your own story here, and subscribe to our best stories in our free newsletter here.